All month Blizzard has been running the 20th Anniversary of Starcraft. Some familiar faces are present at a celebration event. People like Day9, Artosis, Whitera, Ret, TLO, and iNcontroL have been recalling Starcraft moments over the coarse of 20 years. This prompted me to talk about Starcraft and the impact it has had on my gaming career.

I wouldn’t be a writer for Chalgyr’s or Ginx Esports TV if it wasn’t for Starcraft. Truly.

Many years ago, my brother and I would play both Warcraft 2 and Starcraft. I remember at the time I was terrible at Starcraft and decent at Warcraft. So, it made sense that I transitioned to World of Warcraft where my brother stuck with Starcraft, then BroodWars, then Starcraft 2. He would occasionally show me videos of Husky Starcraft casting replays of professional players’ matches. I had no idea what was happening most of the time.

Then there was one video of Husky Starcrafts’ that tipped me over the edge. I think it was not long after the video for Pylo the Pylon’s short life span. It was at that point I stumbled onto Twitch TV for the first time. I landed in Demuslim’s stream, a well known Terran player, who I appreciated because he was always humble while playing, but he explained what he was doing and why. For a person who had played some Starcraft but had sucked horribly, this was the best stream for me to end up in. The only drawback to his stream was the fact that I have always been a zerg player. Eventually, I had to find a streamer that could help me with specific builds.

What year is this? #SC20 pic.twitter.com/3F6gGWPL3F

I found out about Fenner’s Fundamentals and LowkoTV at about the same time. Both of these players had YouTube videos that helped new players with the basics of Starcraft builds. I ventured into Lowko’s stream first and I became addicted to watching the streams for many hours each day. Six months later one of the mods decided to step down because he was getting back into Dota 2. Lowko asked his chat, “Who wants to be a mod?” I said nothing at the time. The chat blew up. In the end, he gave me mod status because I always chatted with people and was nice. 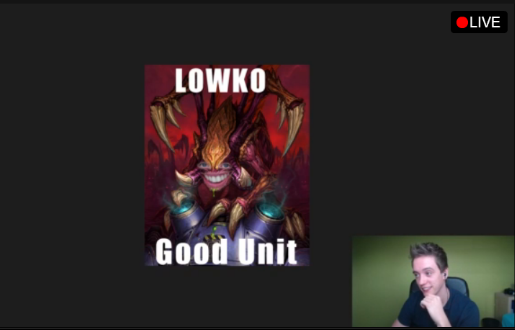 To make a long story short, that was the first of my many swords on Twitch. As such, I worked hard to learn about the bots, potential spammers, using IRCs, etc… I’m now at 40+ channels and it’s still one of the fun things I do because I am always learning new things and meeting people. But nothing prepared me for a chance encounter that would ultimately change my life for the better…

Once in a while I channel hop. I get bored of the same game, so I actively seek out new games and new streamers. Often, I’ll pick someone at random who doesn’t have a ton of viewers, especially if it’s 2am. Anyways, one of those choice encounters was hopping into Scheist’s stream. On the first day I was there, he talked about needing a bot for his channel. Me being me asked what he wanted. After some discussion, he modded me. From there, he asked me in private what I wanted to do in life, which was to write for esports. He talked to a woman that ran her own esports website and that led to my getting the position.

I remember a lot of fun things because of Starcraft. I remember clearly Eseipha and I getting Temp0 to say something to ToD in french. He did it flawlessly and we laughed our guts out when ToD said, “Do you know what you just said to me?”

I remember going to IEM in Toronto where everyone in the crowd yelled out “HOI HOI HOI” for a map called Catellena. The whole reason for that was because of BasetradeTV map intros… I’ll just let you enjoy the intro if you’ve never seen it before…

Also at IEM Toronto a bunch of us went to an after party where Poizon and I played pool. Then I got owned by some Smash Bro Melee pros. Later still, a bunch of people played Cards Against Humanity.  It was a great night.

All in all, the Starcraft LAN events have been awesome.

I think the hardest memory of Starcraft for me was the day I wrote an article about the legendary JaeDong’s retirement. #Imnotcrying #yourecrying. I have no idea if that article was as impactful as it was to write it. I know the editor could tell how important of a player Jaedong was to Starcraft. You can see that here

I could never truly explain how much I owe to the Starcraft community on its 20th anniversary, but needless to say, it led me to writing. I’m forever grateful for the impact this game and community has had on my life.

Of course, I’m not the only one who has been impacted as a result of this game. There are countless examples like Day9, HuK, LowkoTV, DJWheat, itmejp, and many many others. Here here is a preview video called Starcraft is Life – A 20th Anniversary Celebration

I’m excited to watch this when it launches

If you are a Starcraft fan, what have been some of your best memories? Let us know in the comments.