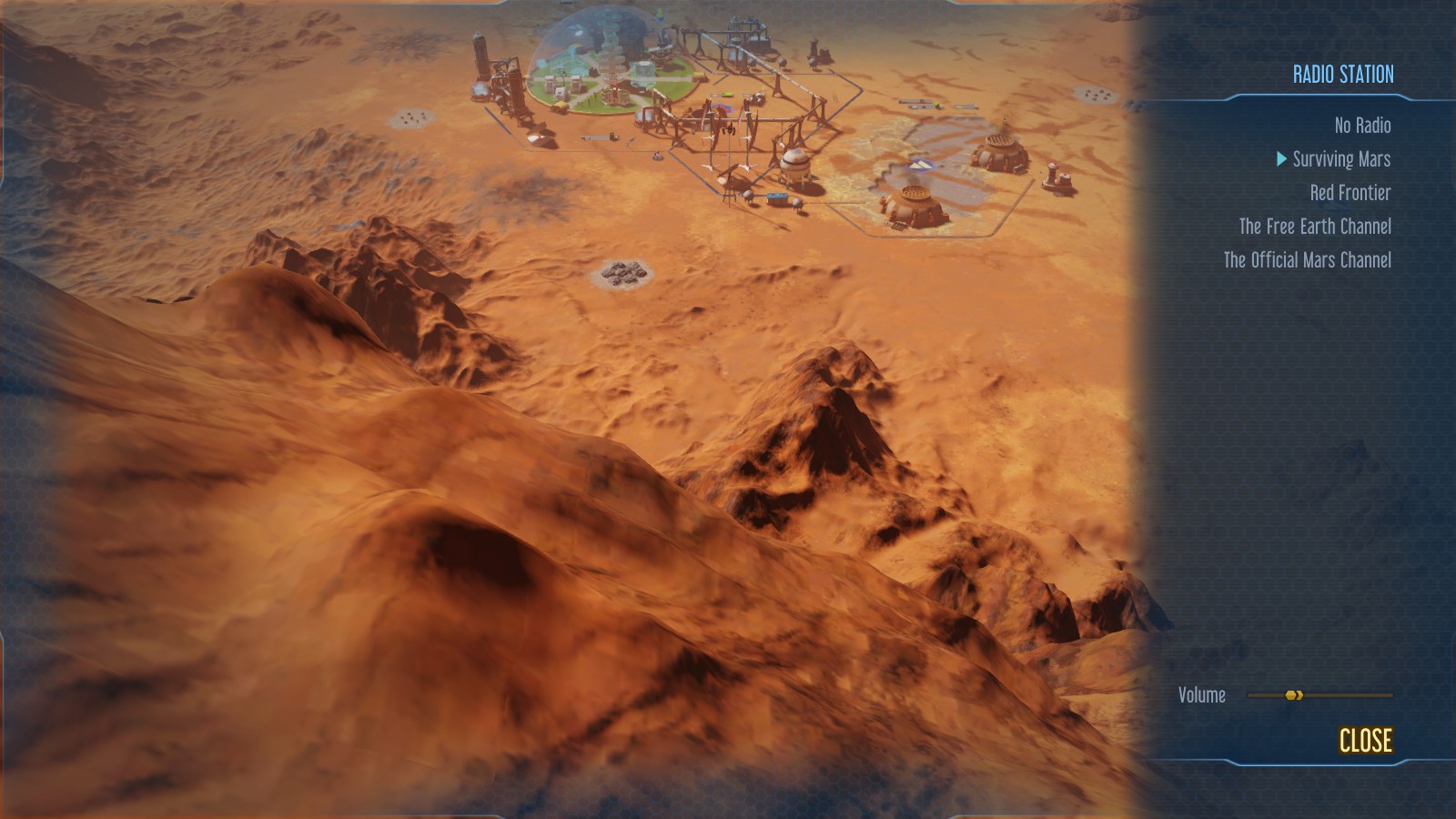 Paradox Interactive launched a highly anticipated game similar to Cities: Skylines, entitled Surviving Mars. This is a beautifully thought out game that has its own level of complexity. In fact, when playing the game before its official launch, I found myself restarting twice because as they say… mistakes were made! 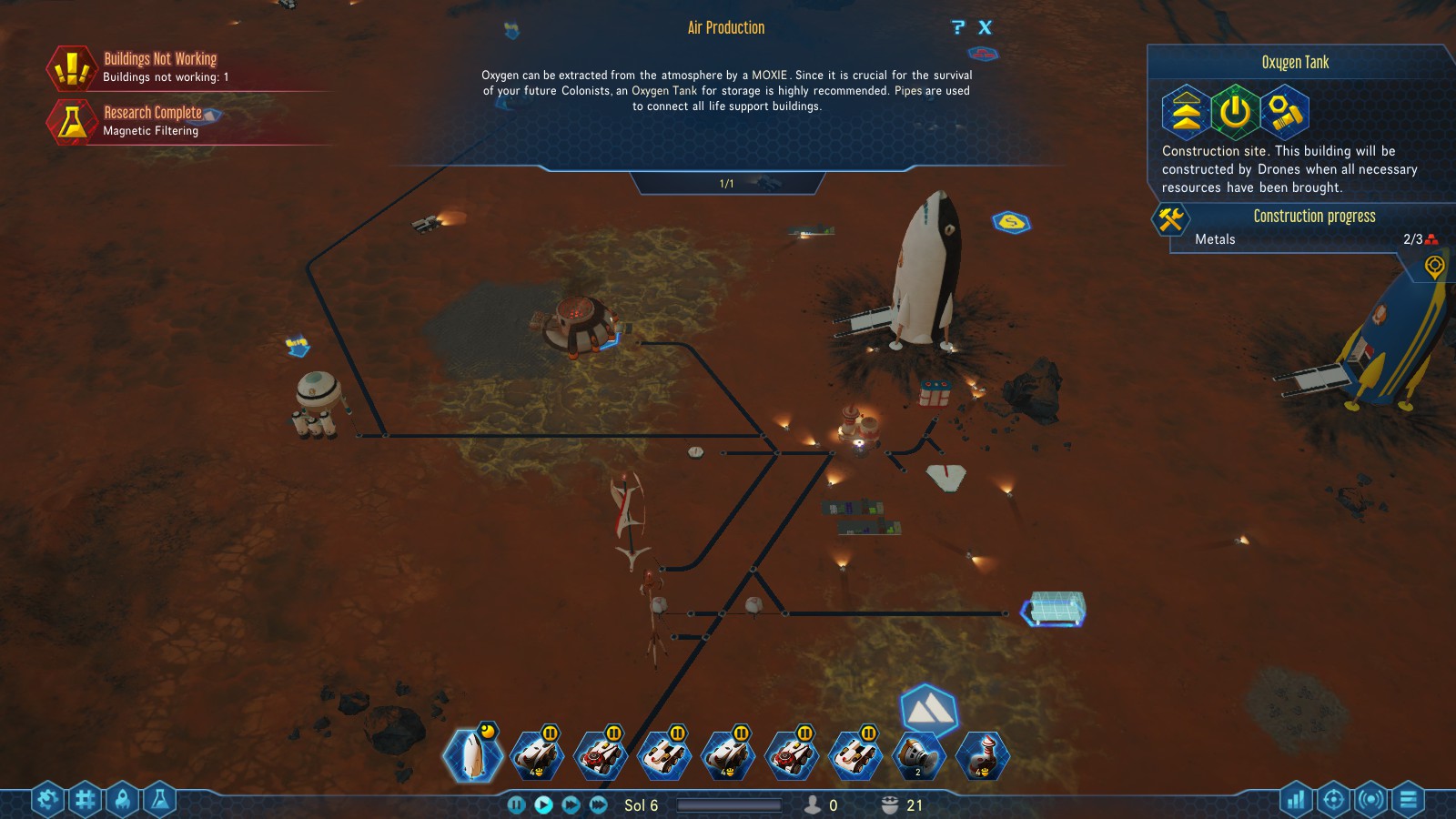 Surviving Mars is a city builder that takes place on Mars, which presents its own set of challenges. On one hand, it’s fairly easy to understand, without throwing the player into a tutorial – a fact that was discussed on a Q&A Twitch livestream (see Final Thoughts for the VOD link). On the other hand, this game can be really challenging – hence why I started over twice…

The first thing to note about this game is the easy start button. With this mode, players don’t get to choose their landing location on Mars, and it is the closest thing to a tutorial. And while Surviving Mars has a hints section to guide a player along, the game doesn’t hold your hand. Though, I didn’t mind the lack of a tutorial since the general concept isn’t difficult to grasp. Some players would certainly take that into consideration but frankly, any avid player of this genre should not need a tutorial, so I don’t feel like it’s a necessary addition.

I really enjoyed figuring out how to create a sustainable colony on Mars. It’s a tall feat because players have to manage power, water, and other resources to ensure their colonists’ survival. Sometimes these resources are quite a distance away, forcing the player into strategically placing buildings to get the most out of their resource use.

On my first playthrough, I wasn’t thinking about building placement and it was ultimately one of the reasons I had to restart. By deliberately erecting different buildings without strategizing, it fast tracked my understanding of what worked and what didn’t. I’d say this is a concept that makes Surviving Mars quite punishing. So, the key to success is to plan accordingly! 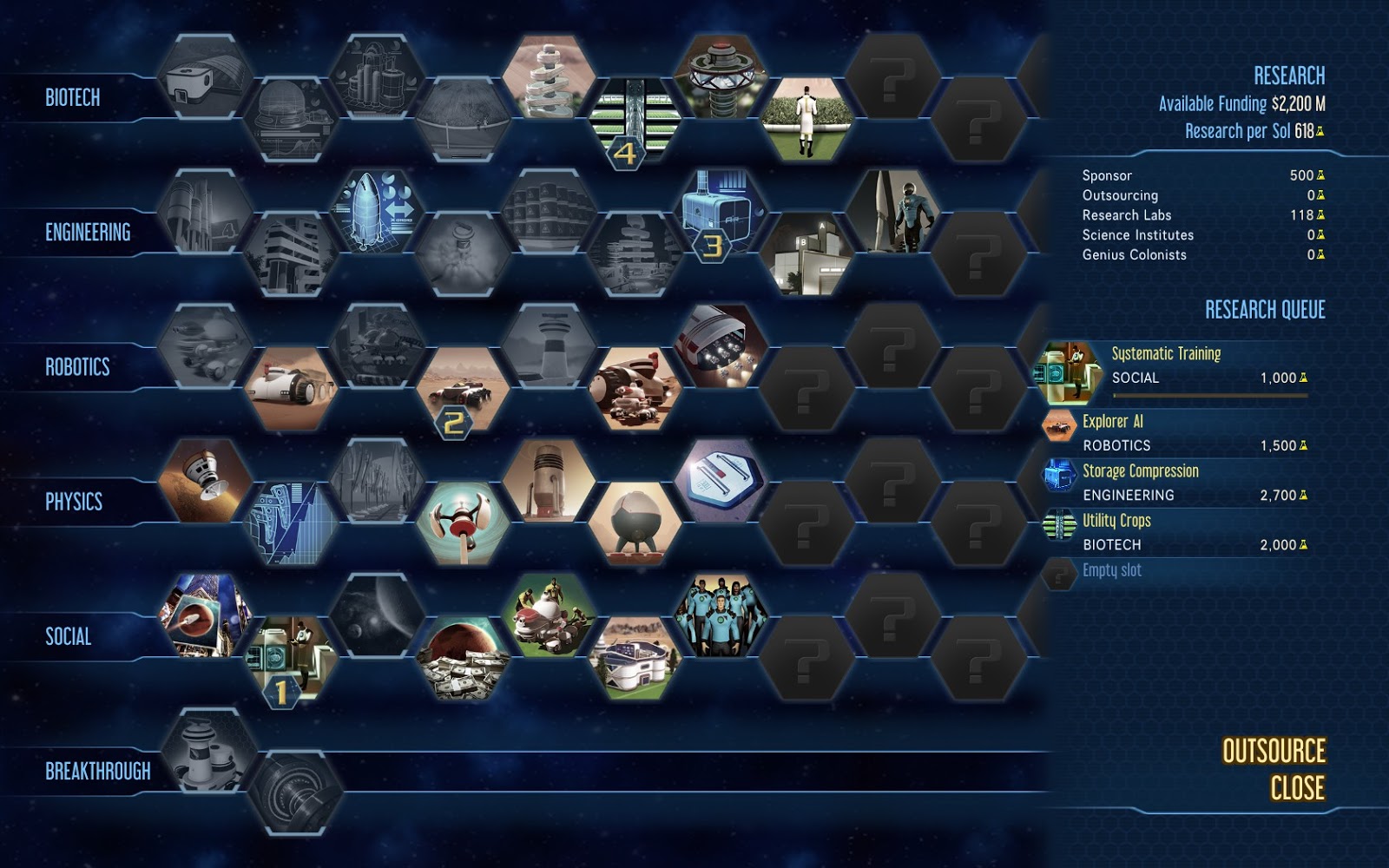 At the beginning of any scenario, you choose a sponsor and a character class – at least, that’s the best way to describe it. These determine the available budget you have as a player and how difficult the game will be. The player then chooses a landing location, which isn’t restricted to the suggested ones on the screen. Regardless of your choice, the difficulty is determined by the class, sponsor, and landing location. Surviving Mars is more difficult because of four types of environmental hazards with varying degrees of difficulty. Having multiple challenges will increase the total difficulty percentage. I’m warning you… It’s an insane idea!

Something unique to this game that I haven’t seen in other city builder games, is that the technology tree is random! You have five different disciplines which you can research technologies and there is a sixth one called breakthroughs, which is only unlocked by scanning anomalies found on Mars. This adds a whole other difficulty level. While to some, this randomize feature makes Surviving Mars much harder, I find this to be a refreshing concept and appreciate its nuanced complexities.

Despite having restarted the game twice in order to talk about a lot of features, I thoroughly enjoy playing Surviving Mars. It has a solid tech tree, the ability to pick specific colonist traits, different resource gathering techniques through use of drones or transport carriers, and challenges dealing with building placement. Compound these elements with the natural disasters component, this game provides a different experience on every playthrough. 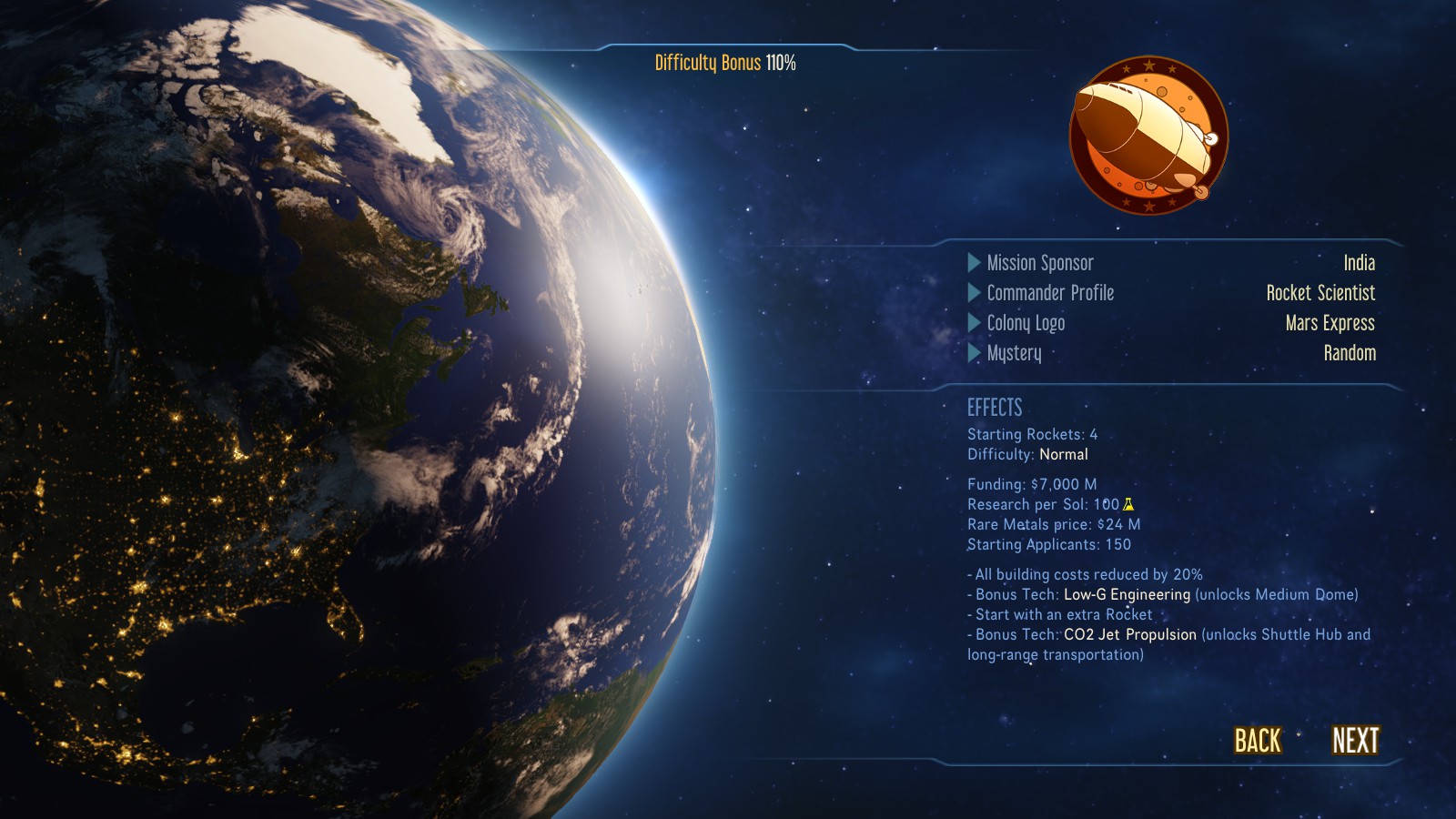 I like the UI in this game because it isn’t busy. Although, there are some things that could be improved upon which I will mention later on.

The different panels are easy to understand and valuable colony information can be easily viewed. In terms of its functionality, most of the game can be played with just a mouse. I consider this to be both good and bad. Players can do everything in Surviving Mars using only their mouse because of screen scrolling.

However, the only downfall was an issue that only I had to deal with. You see, as with many games like Cities: Skylines, the zoom ability is bound to the mouse wheel. This is all well and good until your mouse wheel dies. So while other games have the option to change keybindings like the zoom feature, Surviving Mars does not have that option. If it wasn’t for the Home button to reset the camera, I’d have been a goner!

A handy tip: if you aren’t clicked on a building or unit, you can right click to bring up the build menu! This makes mouse only gameplay simple. 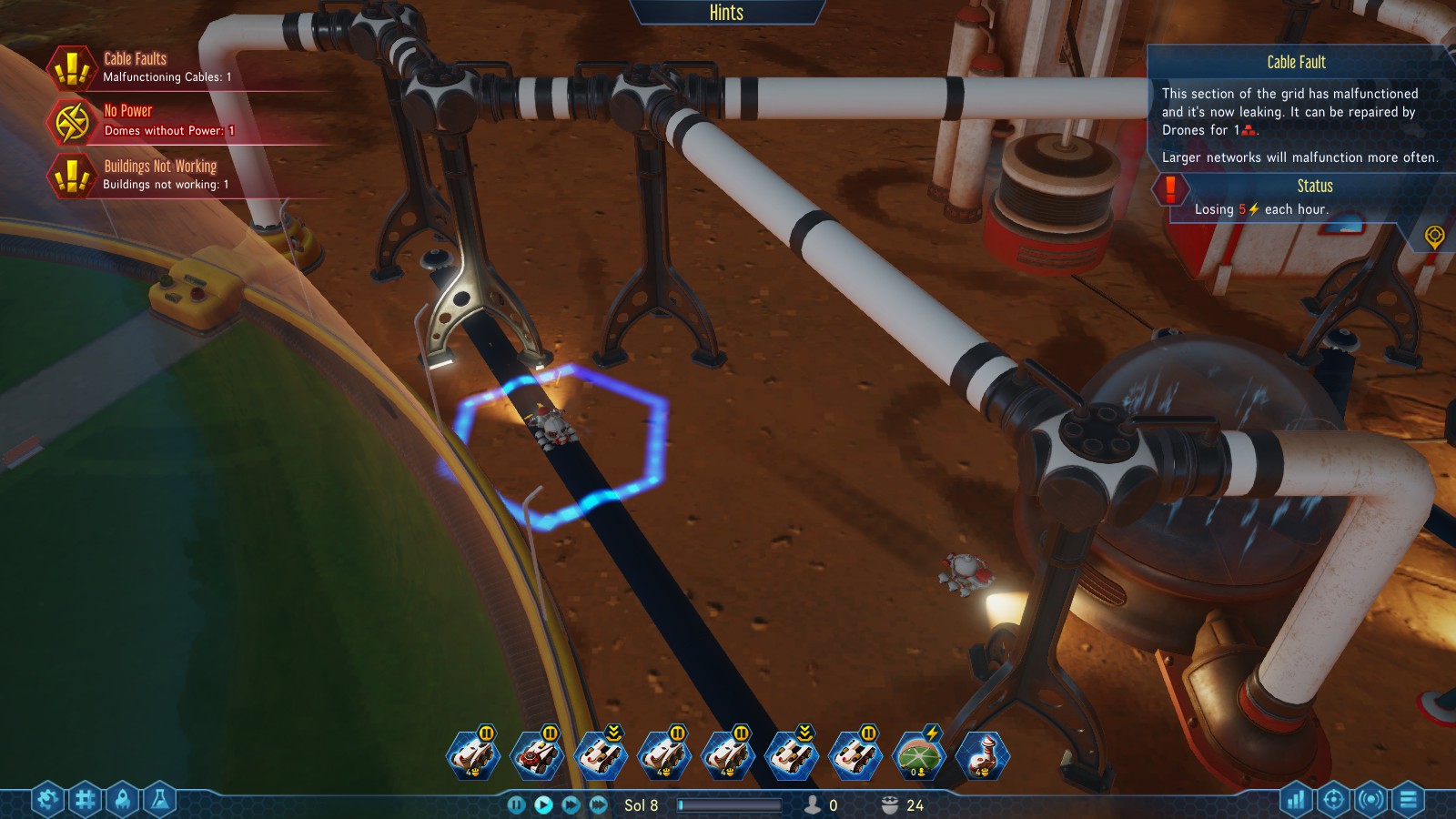 I can’t talk about this game without talking about the graphics. Haemimont Games certainly did a great job in creating a futuristic look. The notion of having citizens live inside domes is not a new concept, but is an idea that we’ve contemplated for years. It doesn’t take leaps and bounds to consider the same type of engineering for life on Mars. Everything from the piping to the power lines look relatable to players.

I appreciated elements like the obvious the passage of time. Shadows descend upon the colony as the sun moves. When a pipe bursts, there is animation for the water spray – which can be hard to see at times. Even small elements like being able to watch the drones pick up one resource unit at a time amused me greatly. (What? The drones are cute, okay?! Don’t judge me!) These decisions created a beautifully conceptualized and pleasing final product.

Oh, and let’s not forget that the main opening screen background images changes every few seconds. Goodbye screensaver and hello beautiful space pictures (Can we have more?). I swear, they thought of everything! 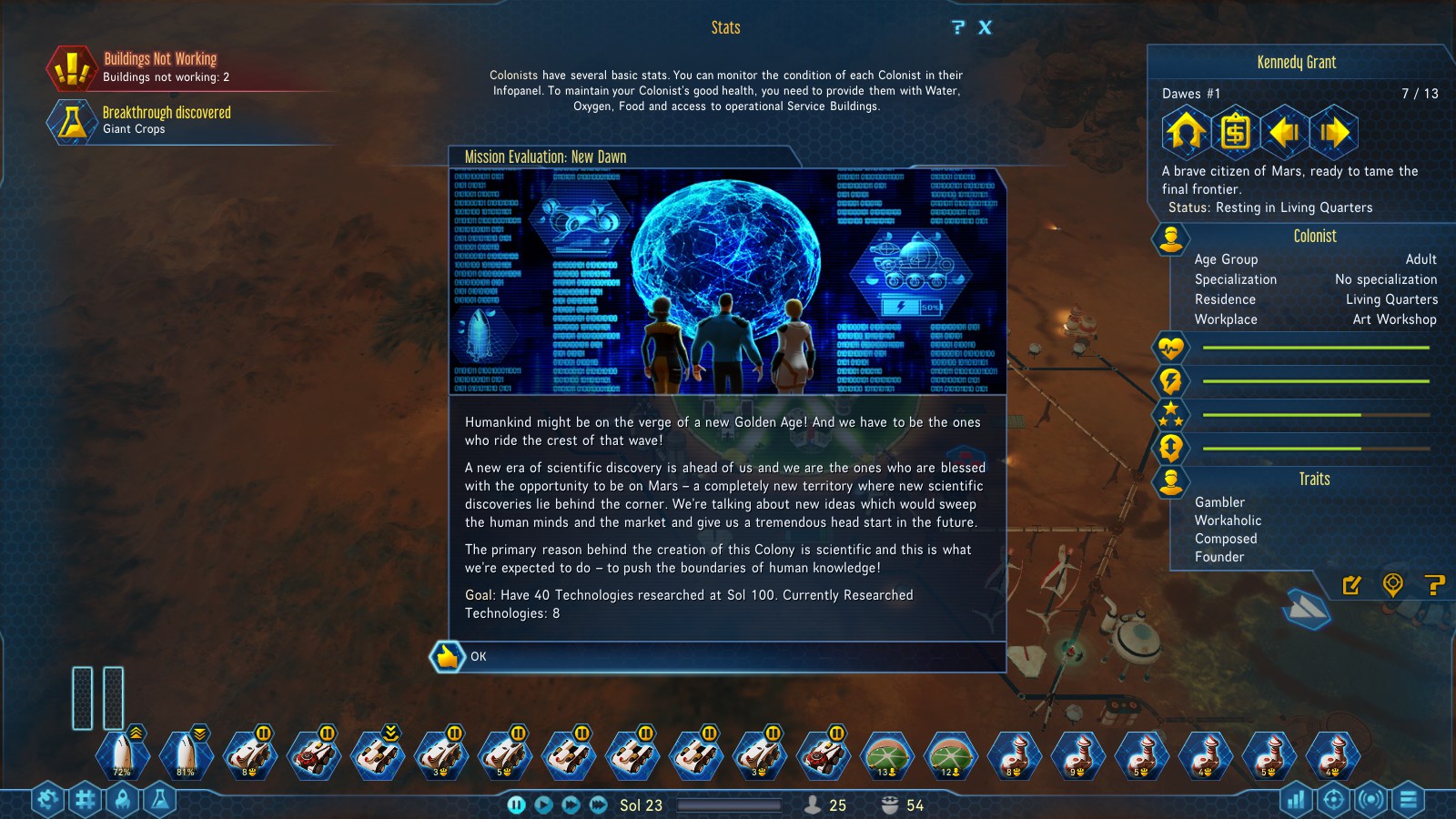 Surviving Mars killed it when it came to music and sound design. First, consider that all of the tracks are licensed by Paradox Interactive, so it stands to reason that they created music befitting the game.

Upon loading, players are are met with a lovely piece that starts off quietly. It then incorporates drums and synthetics which serves as the backdrop to the inevitable piano melody. The song is a fantastic intro and I was enthralled by it. Though, it will never be as epic as Civilization V’s “Baba Yetu” composed by Christopher Tin, this intro was meant to inspire exploration. I was rather impressed.

In game there is a base music loops that doesn’t distract the player from its challenging gameplay. And I say that because certain video games have annoying soundtracks over time. The looped music in this is not like that at all, but should you find yourself bored of it, there is a radio feature in Surviving Mars. The one I’ve listened to has pseudo broadcasters. For me, these short breaks add to the atmosphere of the game and reminds players that they aren’t in Kansas anymore!

I absolutely love this game, even if I feel a little lost sometimes. It has a level complexity that is appealing but presents itself in a logical manner. The games concept as a Mars city builder is alluring to those of us that enjoy this genre.

That said, after watching the Q&A session on Twitch, I found myself questioning some of the thoughts people had. I came up with a short list of improvements because I honestly want this game to continue to grow like its predecessor, Cities: Skylines. 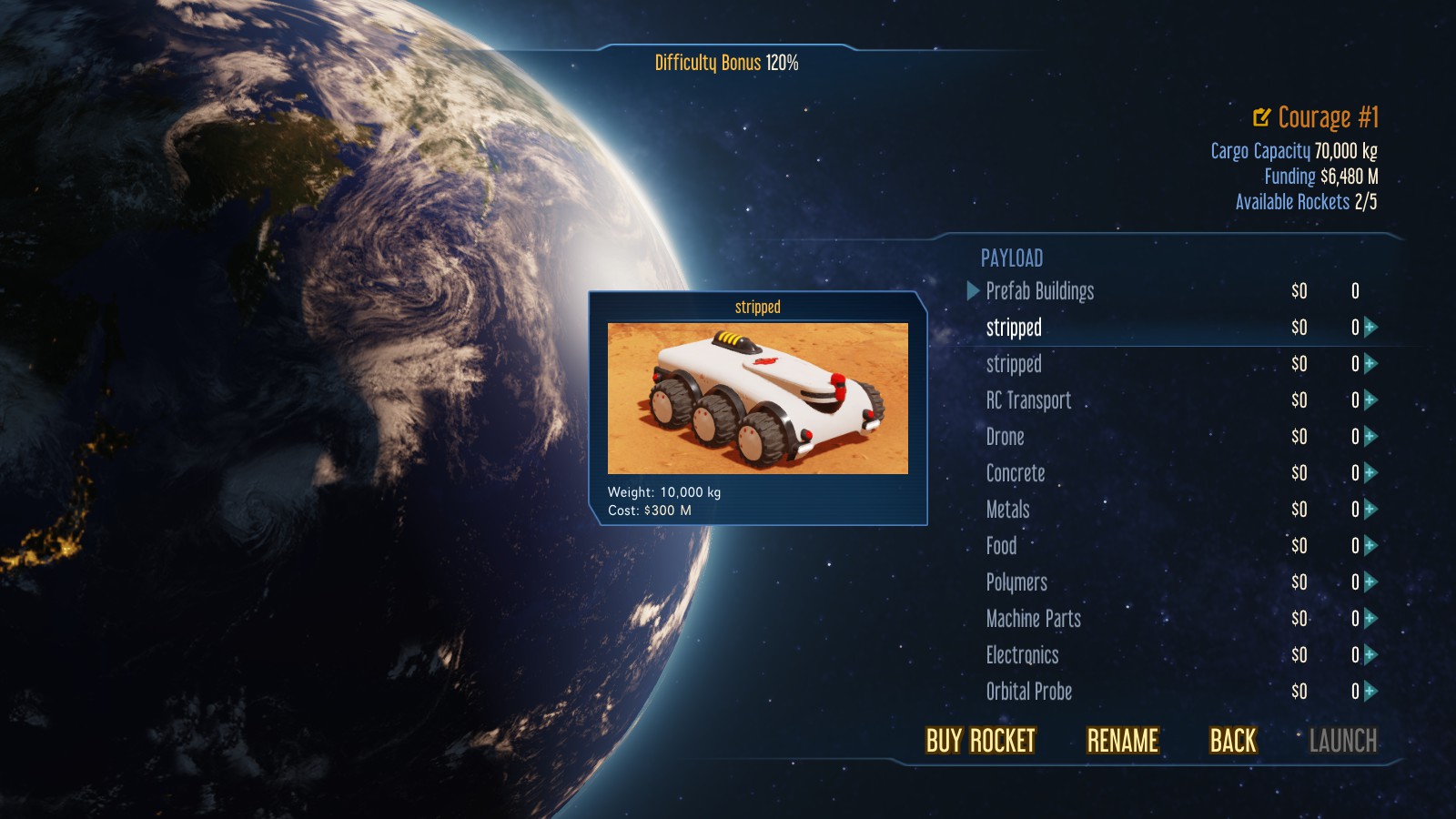 Anyways, all of that said, I love this game and give it a 9 out of 10. There are things the developers said they’d improve in future updates. I appreciate that they are listening to community feedback and it is an element I appreciate from the staff at Paradox Interactive.

Previously I spoke about a Q&A stream hosted by the developers and that can be found here. In this VOD, staff talk about future plans as well as answer a variety of questions. Feel free to take a look.

How do you guys feel about this game? Let us know in the comments below!