comments Share
You are reading
Attack on Titan 2 – PS4 Review 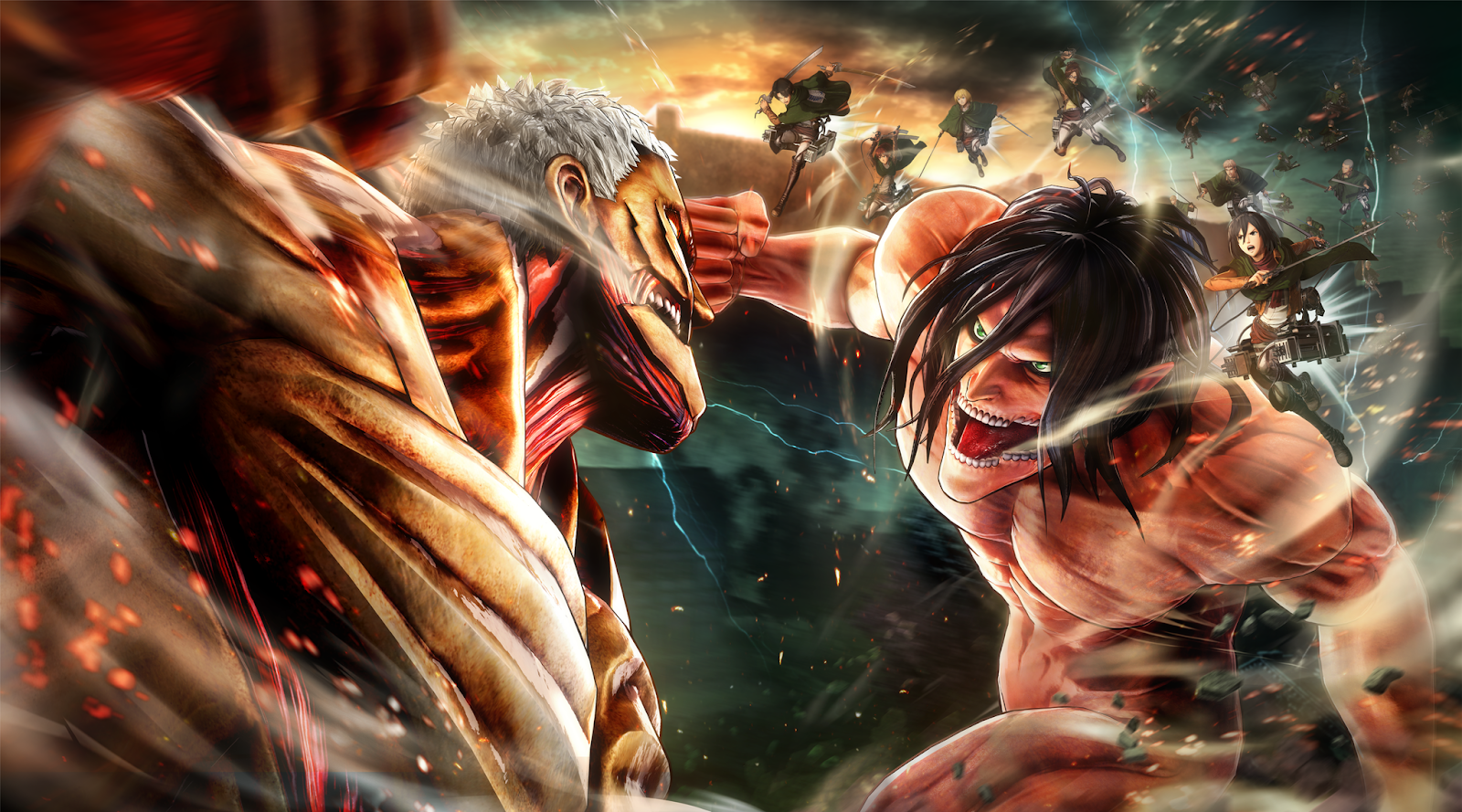 Attack on Titan 2 is an excellent evolution to the traditional Musou style of games, however this most recently release in the Attack on Titan franchise should have been the first release. Set during the same timeframe as the first season of the anime, and therefore prior to the first title released on PlayStation 4, Attack on Titan 2 takes all the right steps to enhance an otherwise dull style of gameplay (Musou). With new base-building features, a fantastic character customization tool, and brandishing a unique point of view on an otherwise well-known story, Attack on Titan 2 manages to hit all the right buttons while bypassing the overwhelming repetitiveness of a traditional Musou title. Future titles in the franchise now have a lot to live up to, and that is an excellent thing.

I struggle greatly with Musou titles like Dynasty Warriors, Arslan: The Warriors of Legend, and Dynasty Warriors: Gundam (to name a few), which is a shame since I tend to really enjoy the franchises that find themselves made into Musou titles. Gundam, One Piece, Fist of the North Star, Attack on Titan, Arslan, and the Berserk franchises all come to mind. The overwhelming majority of Musou titles tend to be flashy yet incredibly dull with repetitive and boring combat, piss-poor stories, and objectives that are solely based around backtracking (go to this point, turn around and go to this point, turn around and go to the original point, now back to the point you were just at, etc.).

Fortunately the first Attack on Titan game, which was uniquely fast-paced and brought some variety to the table, did not let me down in being the same boring old Musou. Attack on Titan 2, fortunately, further deviates from the genre with its base-building, squad/relationship management aspects, and more robust RPG-like features. If and when (I hope) the franchise continues evolving, before too long I see it becoming more of an action-RPG with base-building feature and less a Musou title and if/when that happens, I will rejoice to the heavens. There are few things I despise more than Musou games… 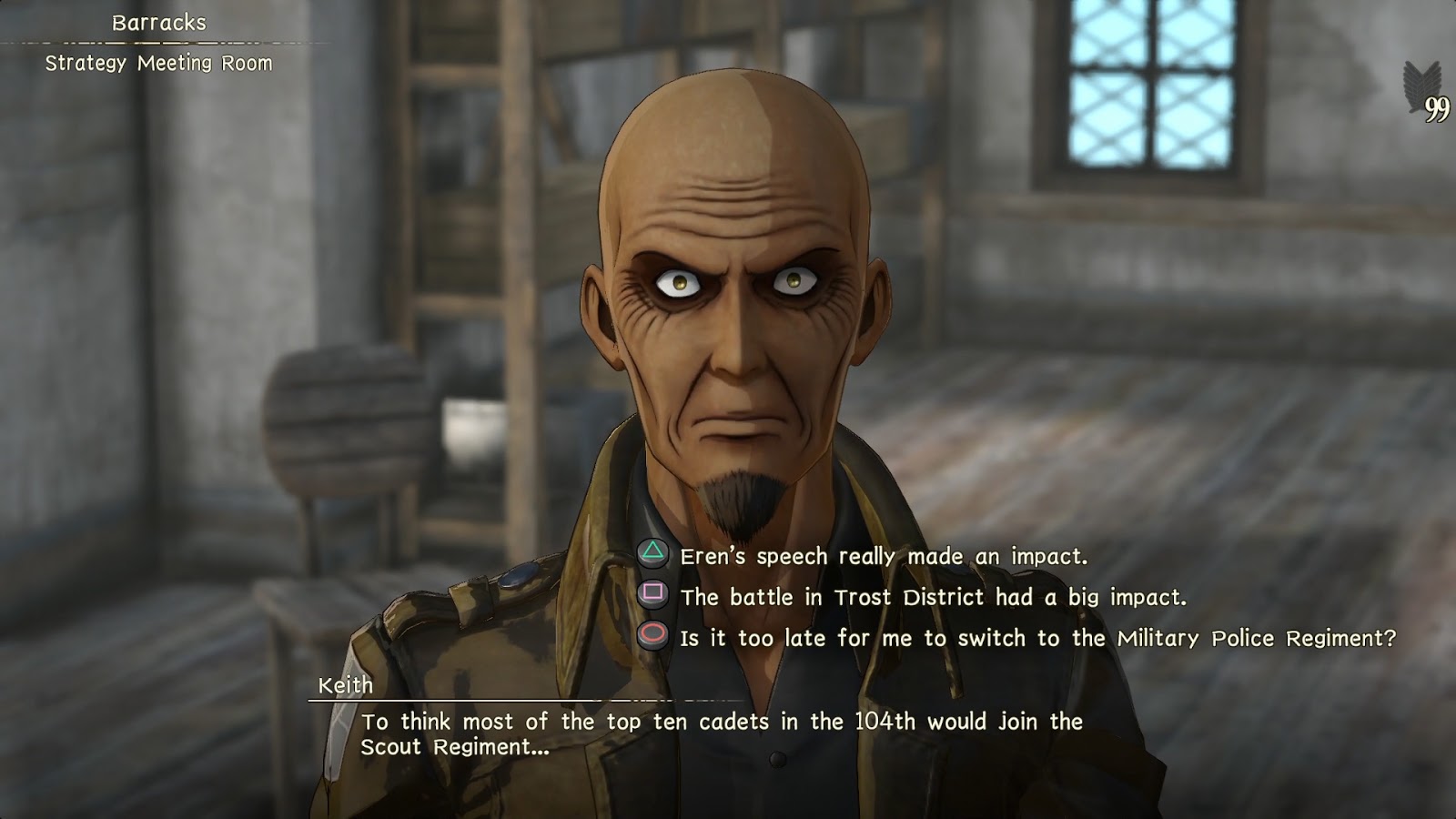 Visually speaking there is very little difference between the first and second games, though I do believe that framerates are better (it dipped a few times, but nothing problematic) and it is most certainly a cleaner looking game by way of draw distance. There are little things that can be noticed too, like a breeze of wind or the spray of blood, which is pleasing to the eye. I did struggle a few times with camera angles, since it tends to want to be rear and slightly up a bit (so it looks somewhat “down” on your character) and this can get you into some tricky spots as you attempt to lock onto the arm or neck of a massive Titan while you are within one of the great many corridors that you might find yourself in.

While I can argue a case for why this fits into the concept of the game, it is still really bloody annoying. What was not annoying, but rather somewhat exciting, was that the map of the various “last bastions of humanity,” like Trost and the various walls, are identical to those found in the first Attack on Titan game, which takes place after Attack on Titan 2 so the continuity with regard to the physical locations is nice.

Prior to playing Attack on Titan 2 I did another run through the first Attack on Titan and I believe that may have been a mistake, as throughout my playthrough of Attack on Titan 2 I could not shake a strange feeling. I later found that strange, uncomfortable feeling to ultimately be disappointment. I already knew where the story would end up, even if the journey is a little different and from a slightly different perspective. I already knew what was coming next. The first game inadvertently, and innocently, spoiled the second game for me, which is why I am fully of the opinion that this game should have been the one to be developed and released in 2016, not the Wings of Freedom. 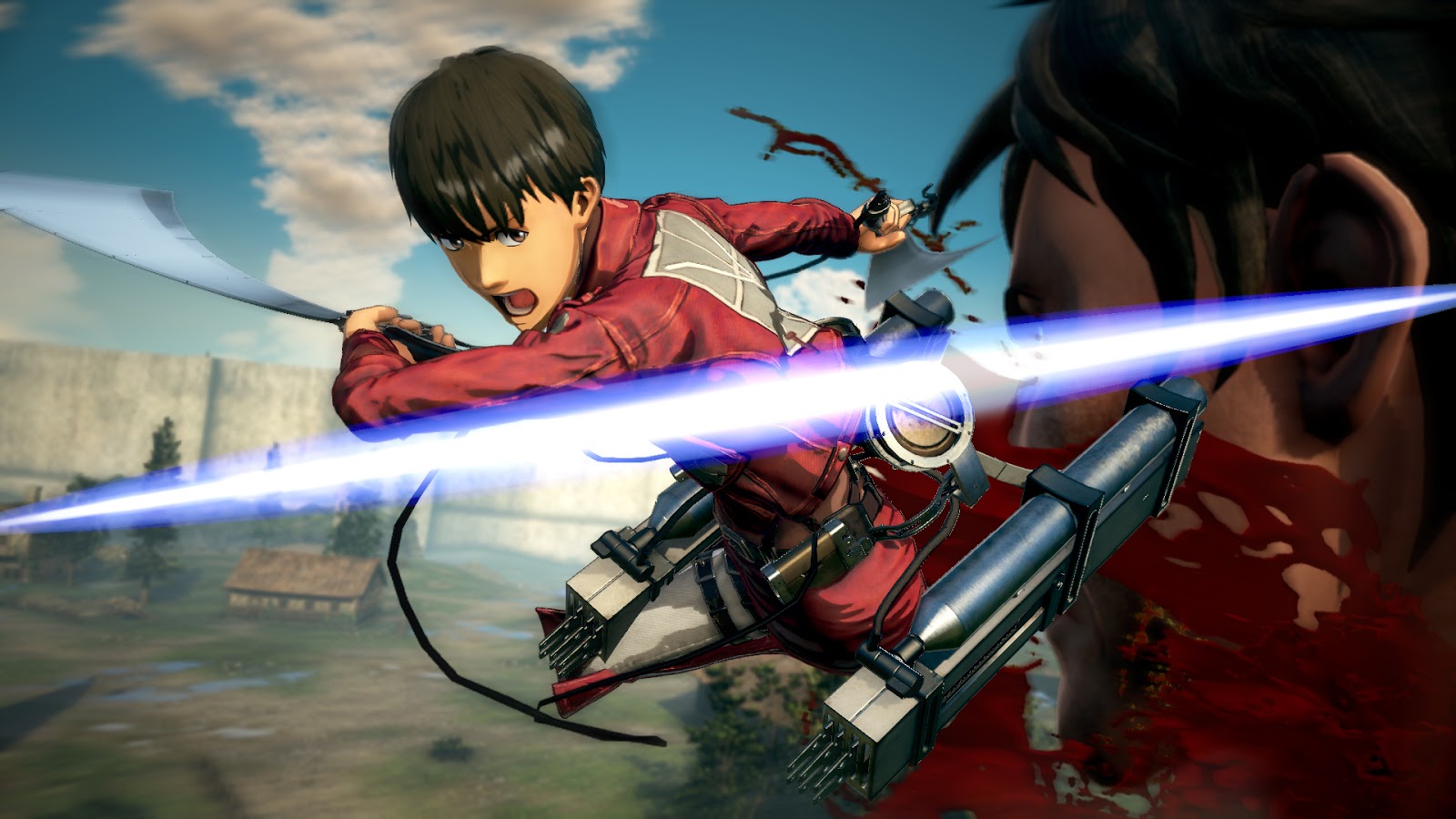 Do not get me wrong, I thoroughly enjoyed the first game, as well as this one, but the swapping of stories is just downright weird and as such had me thinking of the old game more so than the new one. A shame, too, since both are excellent. I would strongly urge that if you have not played the first then you continue holding off and play this one instead; from there move on to the first one (called “Attack on Titan: Wings of Freedom”) as it may make a little more sense. Try not to make my mistake, which was to play the first then immediately start Attack on Titan 2 up, because it will throw you for a definitive loop.

Outside of the fact that Attack on Titan 2 takes place well before the events of the first Attack on Titan, Attack on Titan 2 makes all of the right moves (even if they tease you with first-person views of using the omni-directional maneuver gear in the cutscenes) and shows that a title based on a shounen anime can mature with its fanbase; to me that was shocking as I was expecting it to be more of the same. After all, most Musou titles tend to be mediocre rehashes of the previous title. I was pleasantly surprised to be proven wrong, instead I was greeted with a new experience around nearly every turn. Attack on Titan 2 is, without a doubt, the proper maturation of an immature genre. Well done Omega Force and Koei Tecmo, well done…