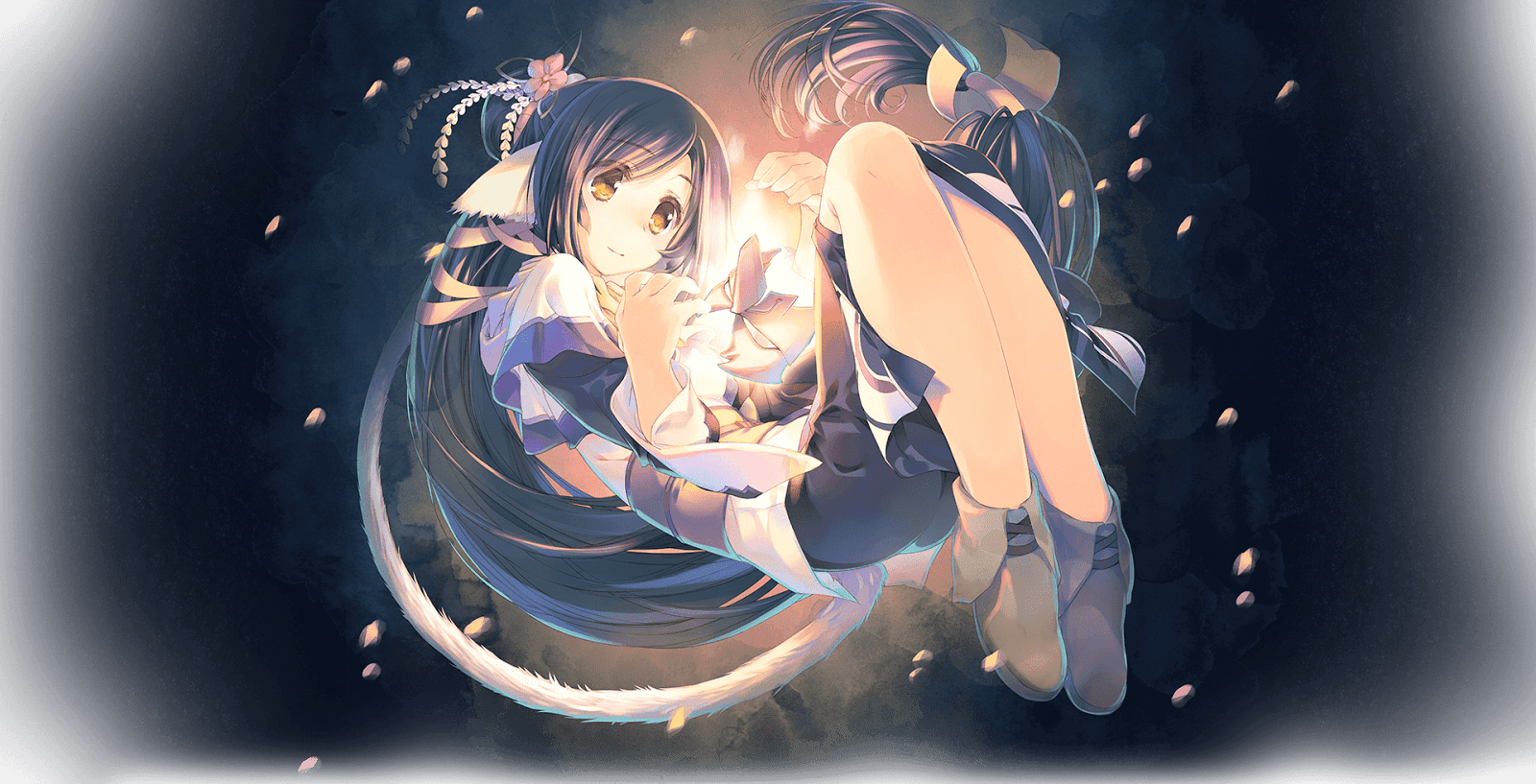 Utawarerumono: Mask of Deception is a really interesting and very difficult to pronounce Visual Novel in the guise of an SRPG. While fuelled by an engaging story and interesting characters, Mask of Deception fails to really grab hold of its audience. Despite having a solid basis for the gameplay mechanics, the extremely sparse use of that basis can sometimes make going through the game feel heavy and forced.

Utawarerumono is a series of media that started with the first game released for PC, and has since spawned manga and anime adaptations. Mask of Deception is an indirect sequel to the original game, set in the same world and shortly after the events of the first game, but dealing with an entirely different set of characters, although there are characters from the original that make guest appearances.

Mask of Deception is the first in a two part set, followed by Mask of Truth, and is stand alone from that first PC Utawarerumono game. Mask of Deception is, broadly, a story of a man and his cat. While traveling through a snowy mountain Kuon, an insanely strong girl with cat(?) ears and a tail discovers a man freezing to death. Upon learning that the man has no memories of his past, Kuon names him Haku, and so their adventures in the land of Yamato begin. 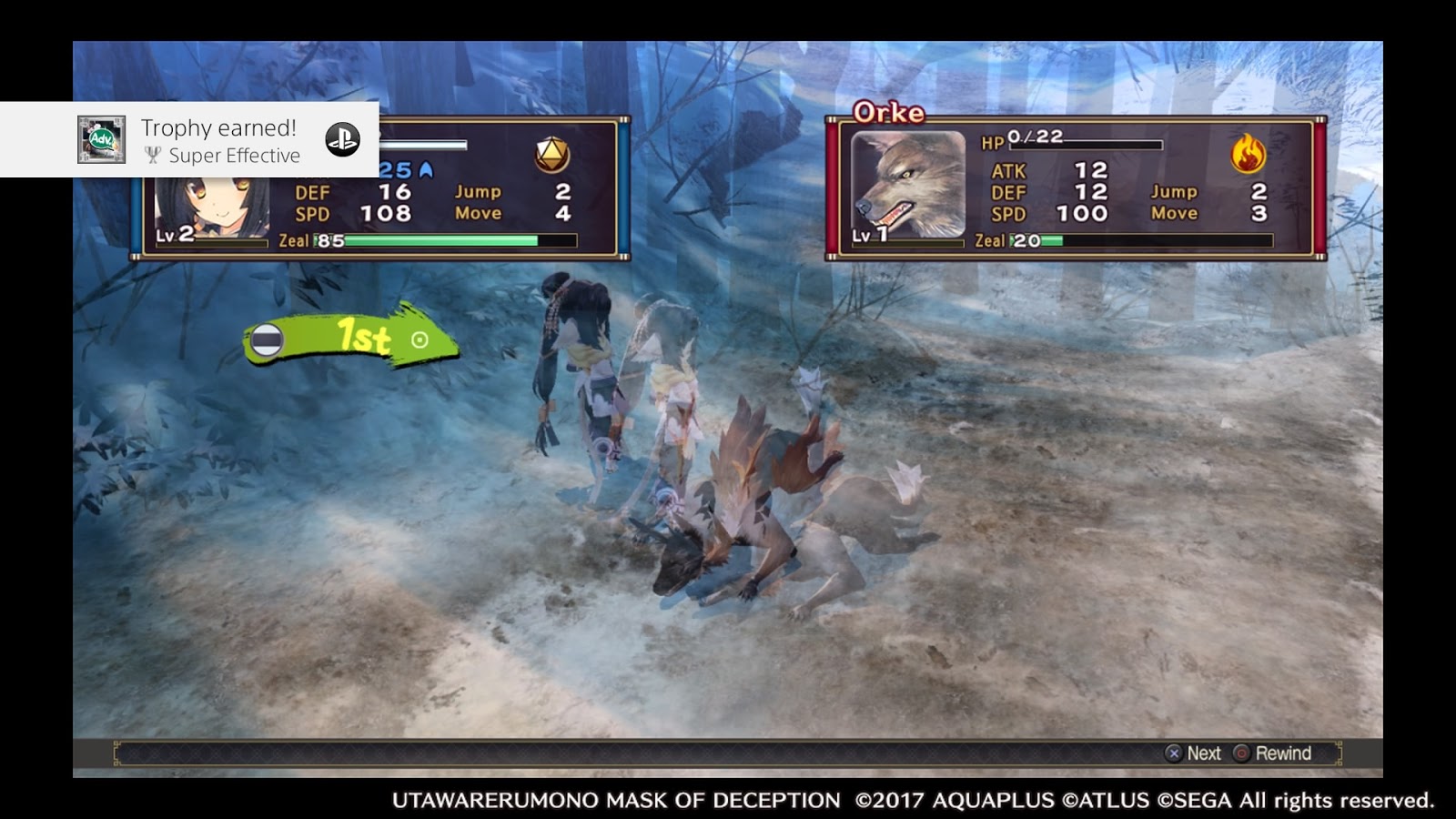 Mask of Deception has a great storyline filled with entertaining characters, a lot of hilarious dialogue, and some really nice visual backdrops for the exposition, which you’ll see a lot of. Ultimately, Mask of Deception is a Visual Novel with some combat thrown in to keep you interested, but the main focus is clearly the story. Since Mask of Deception is the first part, don’t expect a solid conclusion at the end of the game, although it did finish on a rather solid footing.

While not everything will be explained in this first game, I felt there was enough to be comfortable with. If you are already aware of the plot, either from watching the anime or reading the manga, you may be pleasantly surprised with some of the differences between the game and its counterparts. Unfortunately, trying to sit through Mask of Deception while already knowing how things turn out is both interesting to see, and occasionally incredibly painful.

As a game that I played “to review”, trudging through this was a serious chore, as the battles are so far and few between that I started getting antsy. However, if I had thought “I want to read Utawarerumono in high definition”, I almost assuredly would have had a much more enjoyable time. Mask of Deception is truly a game you have to “want to sit down to” as apposed to either told to sit down to it or being made to sit down to it, although the overall experience was positive. 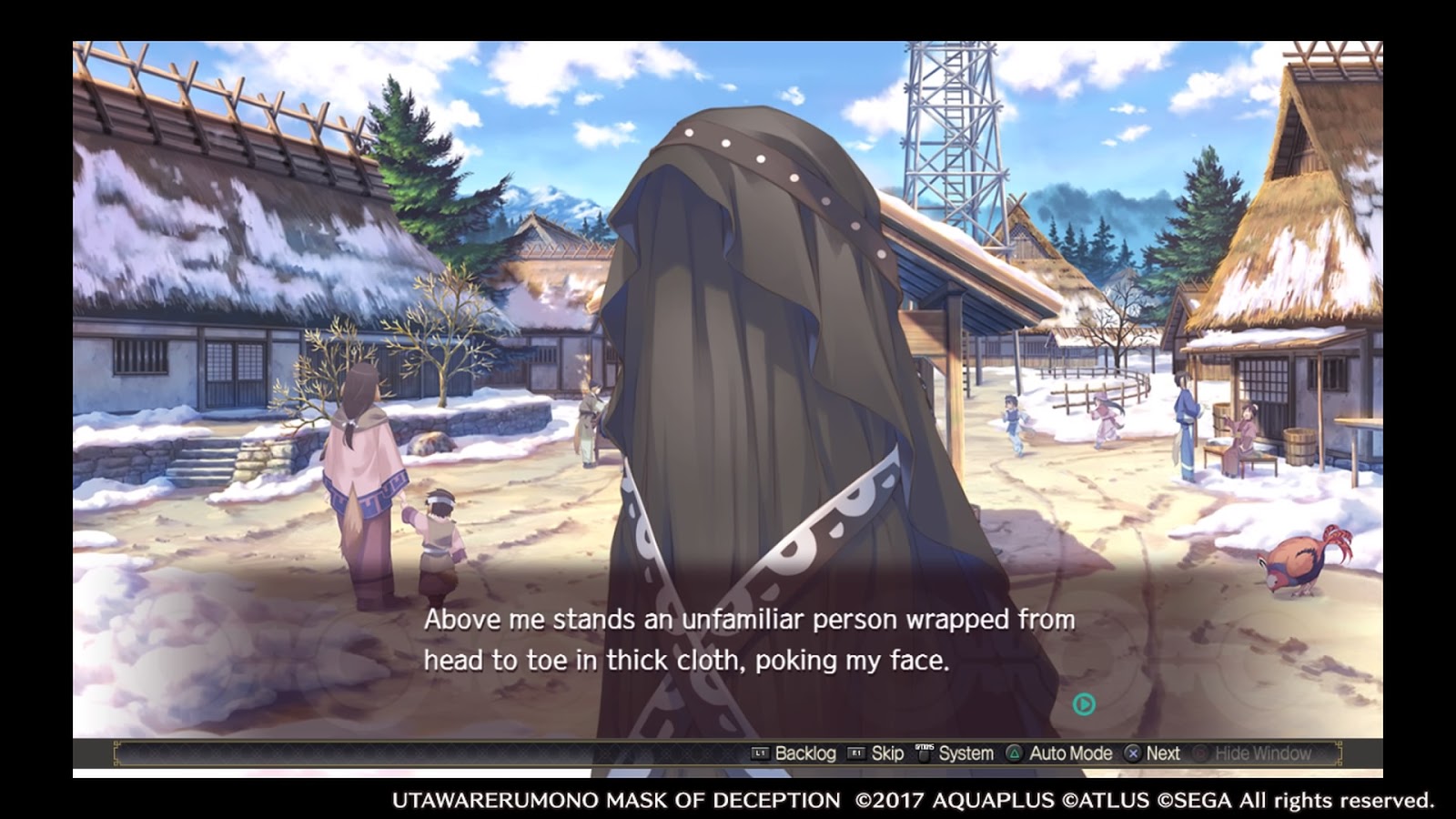 While very few, there are battles in Mask of Deception. Seventeen, to be exact, for a roughly thirty hour or so game, meaning you have, on average, about one battle every two hours. Except some fights are back to back, so it’s closer to one set of fights every three to four hours. Despite this, I found the battle system to work really well. Encounters are set up on a grid type field, and units will take turns moving and attacking, similar to: Disgaea, Fire Emblem, or X-Com. In this case, you only have three base stats: attack, defence, and speed, which should be rather self-explanatory, as well as health and zeal.

Attacking enemy units is really interesting, as you have chain combos, which will increase in length as you level up. Longer combos dish out more damage, and may also give more zeal points. Combos can be adjusted to exclude later hits in the combo after they’ve been unlocked, which is useful because some moves require zeal in order to be used, which you may want to stockpile for special moves.

Hitting 100 zeal will send you into overzeal, which gives you an extra turn and allows you to use a super powerful finishing move, if you have it unlocked. In addition to the standard rock-paper-scissors element effectiveness, Mask of Deception features a few things that I really liked seeing. The first of which is an “expected results” notification, which will tell you what the outcome of an action will be if you don’t successfully hit the action combos. These action combos are similar to Legend of Dragoon; you have to tap or hold and release a button at the right time to initiate a critical hit and continue the combo. 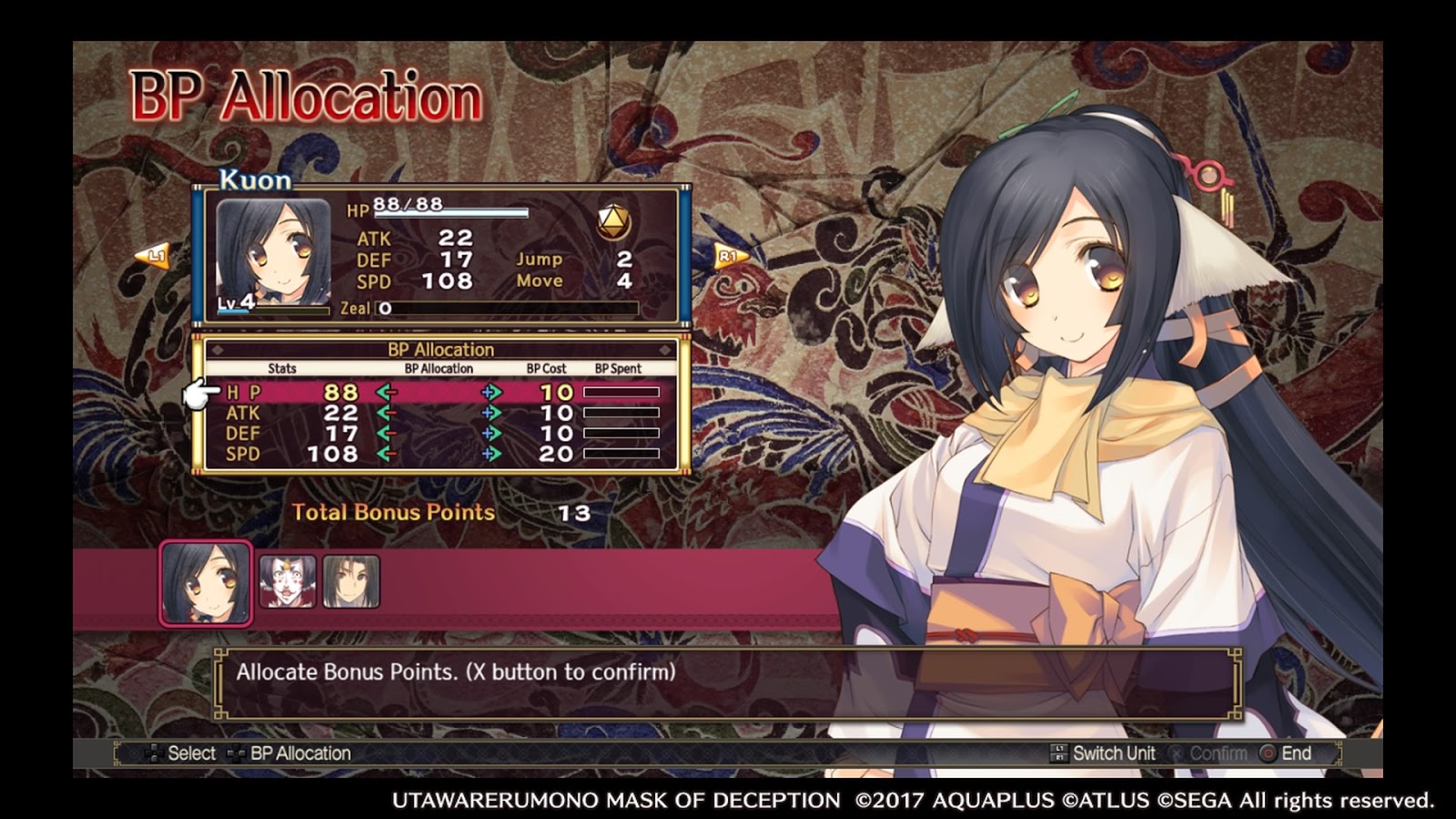 More often than not, I find this style of Visual Novel/Game to have on seriously glaring flaw: lack of good leveling. Yes, characters have levels and grow through either smacking enemies or earning the post battle bonus experience (surprisingly not for healing or buffing though), but a lot of the time I find that this style of game won’t make areas available for getting exp off of monsters very easy to come across, or the gains are really small, especially if enemies in a stage you need to beat are particularly smart or can smack you around (I’m distinctly remembering trying to new game Agarest War on hard).

Mask of Deception takes care of this in three ways that are great to see. First is the ability to replay any stage you’ve beaten as a “free battle” at any point in time, even right before starting another story mission. This is really great if you want to level some lesser used characters, or need a chunk of experience for a lot of units. Second we have the “retry battle” function, which lets you retry the battle from the beginning, but you keep all earned exp/levels, in case you just needed that little boost to get you through.

Finally, we have the ability to “rewind” actions taken, up to a large number of turns back. Fighting a boss, but put your mage a little too close? No problem, simply roll back the other 12 units’ turns and repositi 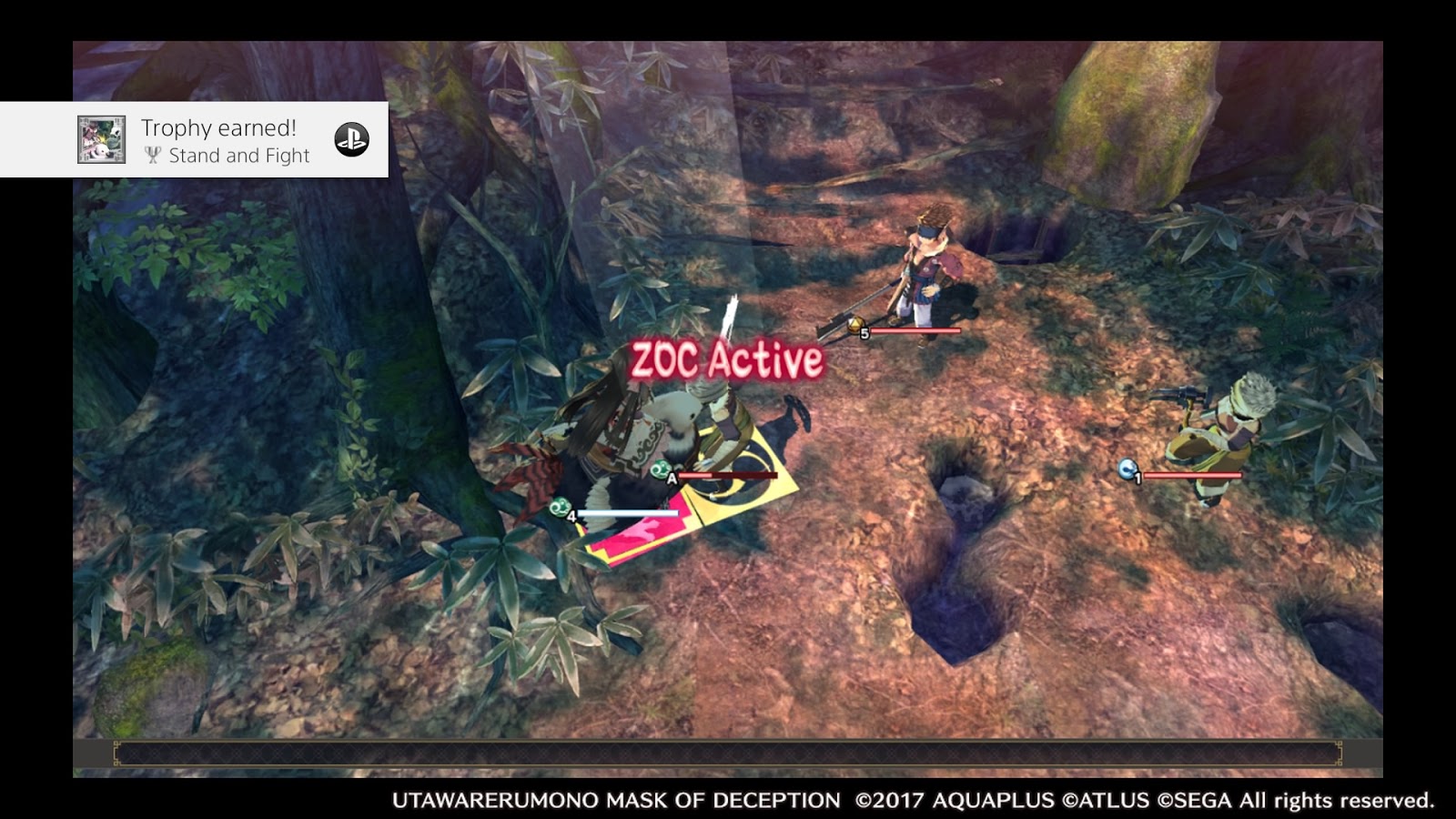 on and try again. It’s really helpful if you misjudge a units actions, or effective attack range. As an example, on the second last encounter, I didn’t notice an enemy with a spear, who snuck beside my back line units and proceeded to kill three of them in a single combo. I had to roll back to the beginning of the battle, but I managed to save them.

Mask of Deception is an incredibly easy game, although if you’re used to fire emblem and not wanting units to die, it may get a little trickier, but ultimately not that challenging. While the battle system and story is really nice with some great visuals, ultimately the game is held back by being more of an interactive novel than a game, which can be quite misleading. The battles are too far in between, and if you’re not prepared for the heavy text, it can seem like a pain or chore to make it through all the exposition or talking.

I feel really divided about Mask of Deception, since I really enjoyed it, but it really bothered me at the same time. Honestly, everything is there to make Mask of Deception a solid game, but it isn’t a game: it’s a novel, and that’s what you need to be prepared for. 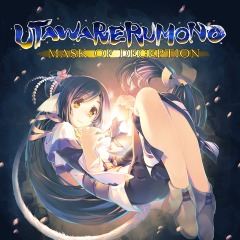