Hoboy what a week! It’s been filled with two things:

Since the Facebook issue is only somewhat related to gamers, I’ll focus on the massive situation with Guild Wars 2.

Earlier in the week ArenaNet announced that they banned over 1600 accounts for using illegal third party software.

Many people have expressed confusion as to which programs are considered to be illegal according to ArenaNet’s Terms of Service. What angered many in the community was the fact that this ban explicitly stated that there would be NO APPEALS. As in, it didn’t matter if players had a CheatEngine installed on their computer, they would still be banned for SIX MONTHS.

For the record, CheatEngine is used by game developers to change a games code to gain unfair advantages. It is open source and functions as a memory scanner, a hex editor, and a debugging tool. It is used for having infinite health or ammunition in game and it is also the program that allows players to create aimbots which are commonly found in games like CS:GO.

Passionate GW2 players did what all internet warriors do, which is to QQ on Reddit. By doing so, the Reddit moderators deleted all account complaints from the site, and started a mega thread discussing the ban itself. People were kind enough to be civil which is a shock considering the horribly toxic PVP community base… I’m not even joking, I read through the entire thread.

One developer who had open dialogues with Anet staff ended up in the cross-hairs of the banwave. It was an interesting read but it shows that even testing mods without waiting for confirmation is bad news. In fact, while I think this person should get an appeal, he was pretty humble in his post even if the ban were to stand. We’ll see what happens later.

Why is this huge?

Let’s consider that in the MMO world, the reigning champ has been and will continue to be World of Warcraft. The fan base in GW2 isn’t nearly as large despite its devoted player base. In fact, it has a thriving, largely passionate – and toxic – PVP community. (I’m sorry. I’m not a PVPer.) The thing is, there are some people who have been hit with this ban that perhaps shouldn’t have. Apparently, that didn’t matter when it got rolled out.

I see this as Anet taking a positive step by banning wilful cheaters, despite not telling what programs triggered the mass ban. They gave a generalized statement, leaving users to guess at which ad-ons were the culprits. It makes sense though. Why would Anet say which mods are acceptable and which aren’t when people could easily attempt to circumvent the TOS? They wouldn’t. (Although, I will eat that statement later in this article. Keep reading.) 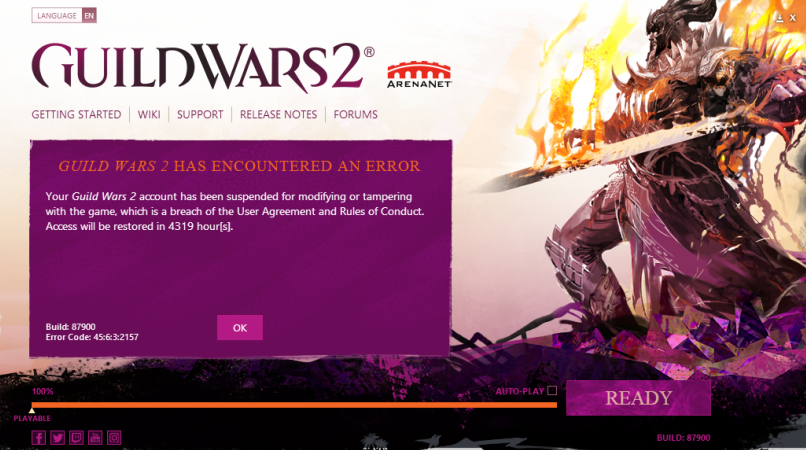 Anyways, after I thought I knew enough about the situation, I stumbled across a different Reddit post written by someone who works for an anti-virus company. In the course of his day job, he uses certain programs that are meant to catch viruses and they achieve this by reverse engineering code. He explains how users in GW2 were likely targeted as a result of spyware installed from a patch, which checked the programs running on everyone’s whole computer! You can read the post about that here.

He does provide a TL;DR version at the top of the page, so you don’t have to read the whole thing to get the gist of it. Anyways, if his post has any merit, it’s mildly horrifying in the wake of the privacy breaches on Facebook, but I digress…

So, on one hand, Anet used a method of discovering cheating programs in order to initiate a mass ban, and yet they failed to deal with the blatantly obvious PVP cheaters who were boosting people’s accounts after payment had exchanged hands. These players were only given a three month ban but didn’t receive any dishonor, much to the outcry of GW2 players.

I feel as though Anet is being rather contradictory here when it comes to PVP and perhaps has driven away some of its fan base. They are trying to find solutions to a problem with their PVP player base and yet has gone about it in a strange way. At least to me. This might be common practice for all I know… As I said, I don’t tend to PVP so what do I know?

Anet released another statement this morning listing the culprits that earned people their bans. As I previously made mention, one of those is called CheatEngine. So even if the program wasn’t used in GW2, game devs still received a ban just by having it on their system. Take a look at the post here: 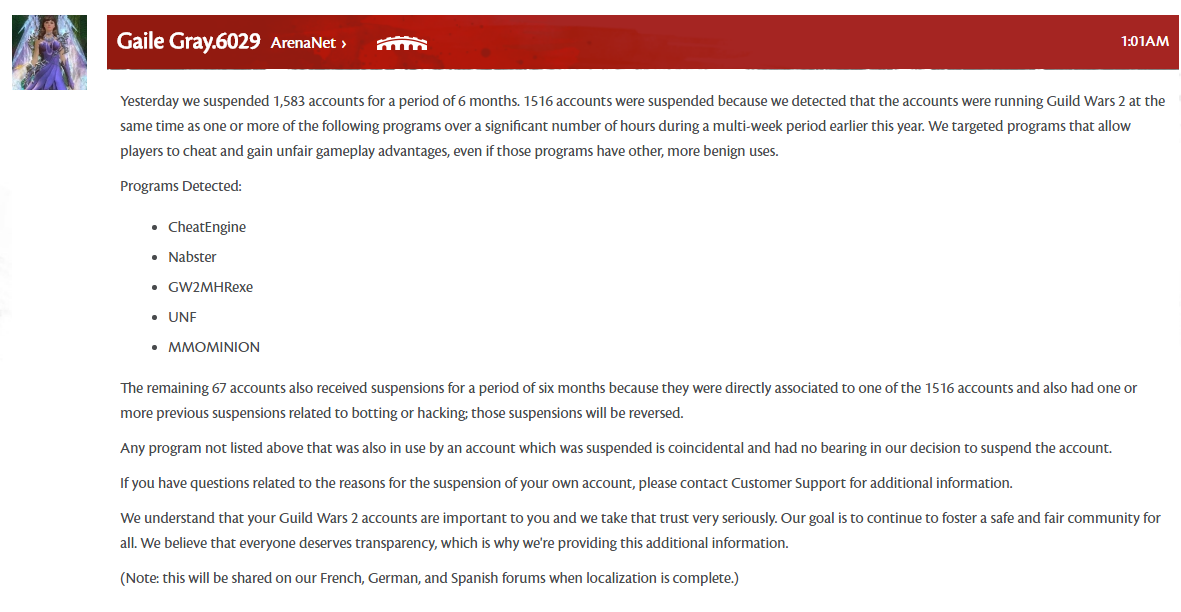 So while I’m upset that Anet would take a blanketed approach to stopping cheaters, I’m also not comfortable with the idea that they feel they have the ‘right’ to check over whole computer systems. If in the coding one can prove that programs were used to cheat in GW2 – because that is the property that Anet owns – then you have a justified reason to ban players. However, checking out whole systems to see if there are cheats anywhere that CAN affect GW2 is NOT alright with me. Your EULA should not be extending that far, regardless of other companies following the same practices. One cannot ban people because of a potential threat!

In short, Anet, I love you, but for the love of gamers please find a better way to take such severe actions.  Ban the known account sharing PVPers like you should have long ago which is taking REAL action against them. And don’t snoop on people’s systems! The GAME is your property, not the computer.

To the cheaters, GET GUD SON or STEP OFF. Learn how to play the game properly. Otherwise, what’s the point of playing the game then? You aren’t owed anything. You aren’t some PVP God that entitles you to money or items. You’re pathetic and should move onto something else. I don’t care.

And to those of you that earned yourselves a lovely ban because you willfully cheated, GOOD. You get no sympathy from me.

Until next time peeps.