comments Share
You are reading
Atelier Lydie & Suelle: The Alchemists and the Mysterious Paintings – PS4 Review Like all good things, they must come to an end. Reaching the end of its trilogy, Atelier Lydie & Suelle bring to a close the mysteries started off by Sophie and continued by Firis. Moving back to the ideas of alchemists belonging to a location, join the twins Lydie and Suelle as they aim to keep a promise to their mother to become the best alchemists of the realm while also somewhat babysitting their useless father.

In a lot of ways, the end of the trilogy felt like a letdown compared to the first two entries. Sophie’s adventure re-experimented with time moving forward without real time limits allowing for the exploration of the space around her town. Firis took the series in a whole new, and amazing Game of the Year worthy direction, with the journey of two sisters across a continent as Firis explored the lands outside of the cavern village that she grew up in to obtain recommendations to take the Alchemist Certification Exam. Coming to a close, Lydie and Suelle takes an overly safe route with the sisters being led on a hand holding adventure that only moves forward once you’ve completed a goal. There’s no moving forward without it.

Now, I’m not saying that it’s not a decent adventure. The writing is just as good as it’s ever been. The character designs are as fabulous as ever especially with the prince of the realm and his punni mask. But mechanically after the previous two it feels more like something that the beginning of a trilogy should have been in order to draw in a new audience as it’s very accessible but not feature heavy. The story really only moves forward once a particular task has been completed and you can’t really fail at these tasks either. There are no timelines so you can take your time in order to stack the deck, or the materials, in your favor in order to ace the requests being given to you. 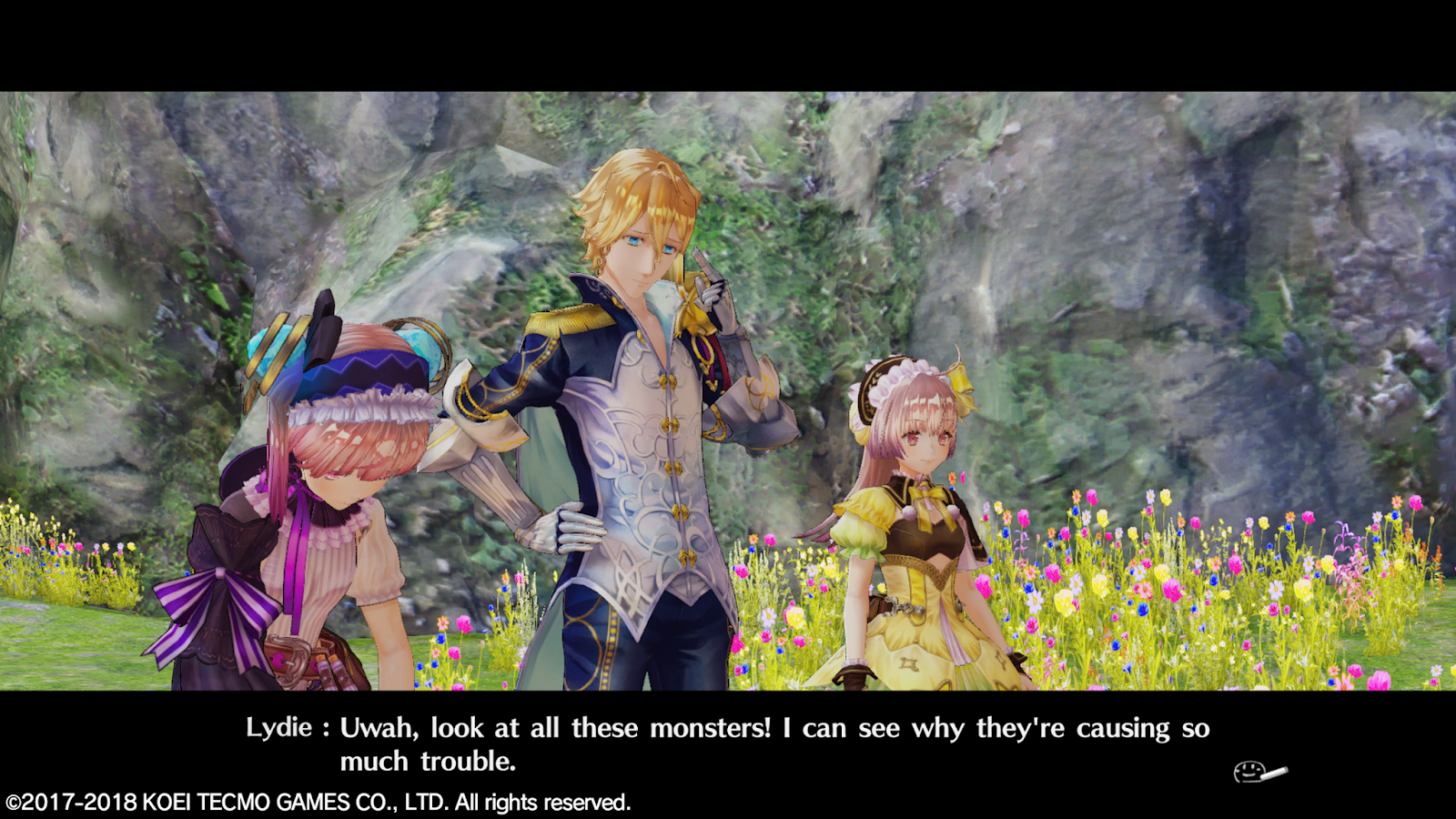 Like all budding alchemists, Lydie and Suelle start off at the bottom of the ranks making things go boom and more often than not cleaning more than synthesizing. This is until one fateful day in which as luck would have it, they both discover a mysterious painting that they can delve into for materials of amazing quality and afterwards find a teacher. I had wondered and assumed that the teacher would have been either Sophie who taught Firis or Firis herself but I was pleasantly surprised with the direction of it being Firis’ rival and best friend who took up the mantel. This works out better as Firis will join the party later on and she’s even more awesome now than she was before.

So with the stage set, each chapter falls into a pattern of having to complete xth amount of tasks in order to bring up the sister’s popularity before being able to head to the castle in order to grab the current exam in order to bring up their rank. These tasks can be anything from pick up ten or thirty materials, jump ten times, fight in three or ten battles, perform alchemy or pick on a specific type of monster. Most of these will be chapter specific but it was nice that certain alchemic tasks such as performing the synthesis of a Neutralizer with specific qualities would already be marked as done if it happened to be in your inventory. In certain cases the tasks required were almost done before they even started.

Once these tasks are done and you obtain and then complete the exam, the real fun begins. After every exam a new painting is opened up for exploration and these are really what sell the title Alchemists of the Mysterious Paintings. Each painting is different from one another and new paths will open up as time goes on but it’s their themes that clinch it. Without too many spoilers, the first is a haunted Halloween styled forest which wouldn’t fit in the actual land’s environment but being in a pocket dimensional space? It’s perfect. This allows for plenty of different locations to be explored which otherwise wouldn’t have made sense. These locations are also really needed as unlike Sophie who had new locations unveil upon the map every time she explored further or Firis who simply kept walking and exploring to uncover new ones, Lydie and Suelle are stuck with the ones currently being granted by the story. There’s no moving outside of those parameters and sometimes you really just want to get the chapter done and over with because your sitting on a bunch of recipes and no current access to the materials in other to synthesize them.

Combat I am happy stuck with the turned based approach that is based off of character speeds instead of everyone setting up their actions and performing them at the same time. Starting off with a party of two, and then three, once you eventually get access to a fourth character then they can either perform support actions such as healing hit points or mana as well as a follow up attack like Firis shooting a hail of ice arrows after a frost bomb had been thrown. Another neat little aspect is environmental effects such as an ice cavern which will drop stalactites onto everyone battling if a wind attack is being used. Does it hurt? Very much so. Was it worth using it? You bet.

Atelier Lydie & Suelle: The Alchemists and the Mysterious Paintings is a decent end to the current trilogy but I wish that they would have gone for gold and pushed the envelope further like Gust had done for Atelier Firis: The Alchemist and the Mysterious Journey instead of having played it safe. It’s everything that an Atelier entry should be but after the previous two that pushed what was capable, they played it too safe making it feel more like the introduction to a trilogy instead of the end of one.