So what is Shuto Con? It is an annual anime, cosplay and gaming convention that adopted the tagline “It’s All About U!” for attendees. With things kicking off Friday morning and running until the end of the afternoon on Sunday (3/23/18-3/25/18), there was a lot to see and do. But my primary takeaway? I had a really good time and can easily see myself attending again going forward.

Why is that important, you might ask? Well, this is my first time attending Shuto Con, and I really had no idea how much I would actually enjoy it. I did not enter blind by any means – my oldest daughter (who turns 22 soon) first attended several years ago, and has been going to Shuto Con on and off ever since, including the last couple of years. She would come home, tell me about the things she had seen and done, and assured the rest of us we would enjoy it. So, as a first time attendee, I will be writing about my overall impressions here, with more articles to come about specific panels and other aspects of the conference that we spent larger chunks of our time with. 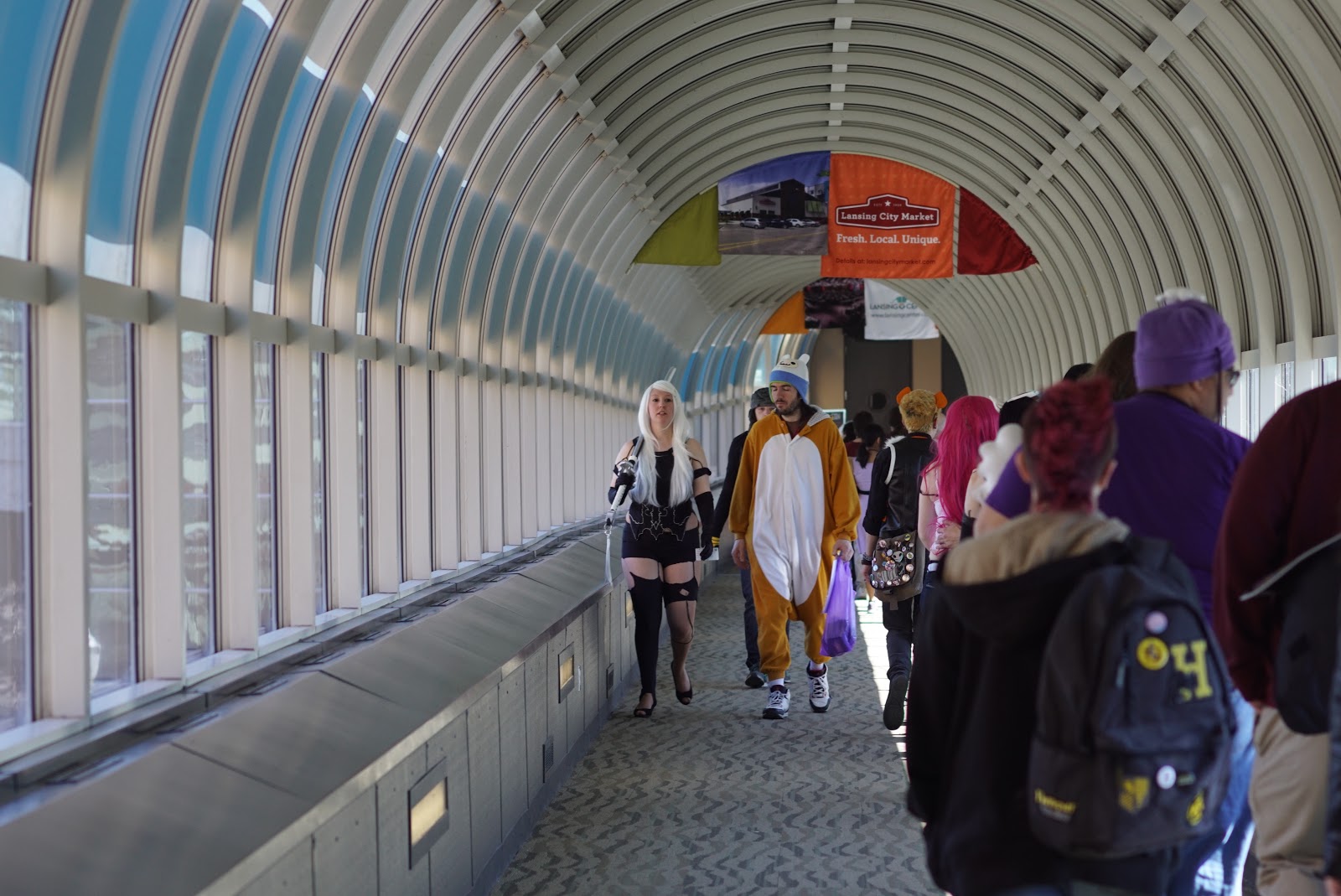 Everyone’s impressions of an event like this are going to vary for a variety of reasons. We are a site that focuses heavily on reviews, and those are based on opinions – opinions that not everyone on the team always shares. Sometimes I really like a game someone else could not stand, and there have certainly been games that I scored lower than team members would have. Robert also attended Shuto Con, and I expect he will have some different opinions (he and I attended some of the same events, but we did a lot of separate ones as well).

So walking in the door and getting registered was pretty easy. It helped that Heather (who was handling most of our photography) and I had my oldest (Raegan) in attendance again this year to show us the ropes. We got in early, before there was a lot of scheduled activity. We were familiar with the venue, which certainly helped as well. We attended the shop area first and foremost and while some of the booths were empty that morning, they were all well filled-in by our arrival on Saturday. We um… may or may not (we certainly did, in fact) spend quite a few dollars on various items over the span of the weekend. There was quite the collection of shops, from scented candles, to lots of different artists (and again, these are subjective, but I found a few I really liked, several that didn’t pique my interest, but the variety was solid) and a ton of licensed merchandise. Probably the only bad or surprising thing about the storefronts was that they closed a bit earlier than we expected on Friday (they closed at 7), so we had to come back the next day to pick a few things up that had caught our eye earlier in the event. 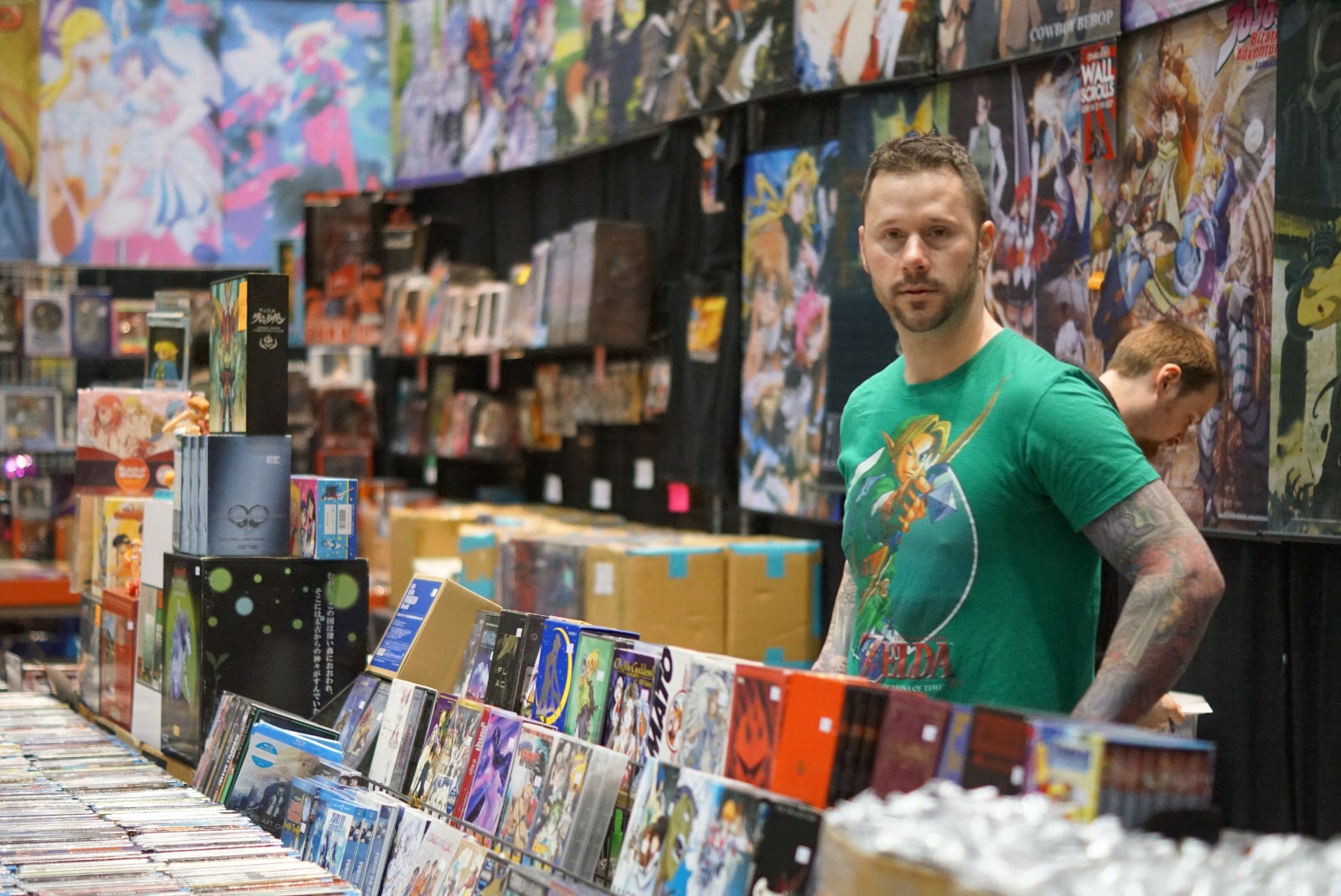 Next up (since we still had a bit of time to kill before the opening ceremonies) was a room that I had a tendency to gravitate towards any time there was a lull in events I wanted to see: the video game room. Frankly, a room like this is a perfect fit for a convention like this. Over the years Shuto Con has placed more of an emphasis on gaming, but it makes perfect sense. Chalgyr’s Game Room was entirely focused on gaming early on (for years we ran with the tagline: Where it’s all about the games). However, the line has steadily blurred over the years. I have always had an interest in titles with an anime aesthetic. I started Chalgyr’s Game Room back in late 2009, and some of my earliest reviews were Final Fantasy games. The eleventh game that I reviewed was the very anime-styled Record of Agarest War. It did not even use English voice talent – it was all subtitled, but I thoroughly enjoyed it. However, over the years CGR has added tabletop and board game reviews, and in 2015 we began to cover animes as well (starting with Robert’s review of The Princess and the Pilot). We have had the privilege to work with some really great publishes, like NIS America (such as with Toradora!) to Rooster Teeth (RWBY comes to mind) and more.

I bring all of this up because in some ways, Shuto Con has grown in a similar path to Chalgyr’s Game Room – we just started in different places. However, the end result is a similar space where their video game room (which runs non-stop throughout the conference) has become a very popular hub within the convention space. There are projectors for competitive fighting games like Street Fighter V and Super Smash Bros. There were smaller stations set up where players could enjoy popular titles like Cuphead, Call of Duty, Star Wars Battlefront II, Overwatch and a whole lot more on nicely sized single monitors. For those looking for a more arcade feel, custom cabinets for popular fighting titles lined some of the rows, and some uniquely Japanese games that I had never seen before provided guests with gameplay opportunities ranging from banging on drums to dancing and rhythm-based button pressing and a whole lot more. Add to that a couple of very cool VR stations (including Vive, and PSVR), and I came away pretty impressed – especially since it was all free (except prize-earning claw-type games, but that is to be expected I think).

If there is a few complaints to be had, there were some difficulties with one of the VR stations, it was a little colder than most of the rooms (it had kind of a wide-open warehouse-like feel) and for Heather (who doesn’t particularly love loud, enclosed spaces), the volume during peak hours was a bit rough. Still, there were several vendors who came in and put this all together and they did a really good overall job. A few stations went down here and there along the way, and there were a couple of games that could have been here that were not (Mario Party was probably the most glaring omission), but this room was one of the busiest throughout Shuto Con, and with good reason. Simply put, It was a great deal of fun.


Outside of the shops and the gaming areas, we began to see the numerous cosplayers start to trickle in steadily over the first couple of hours. As with anything of this nature, the quality is going to be pretty hit and miss, but there was no shortage of creativity on display. Some of the earliest ones that caught my eye before the opening ceremony included a person walking around with a very long (I mean like three feet long) Alien head with a sign hanging around the neck that said: Tell me I’m pretty. There was a pretty eye-catching D.Va (from Overwatch). The materials were mostly cardboard, but the size of the outfit and the bright pink color certainly made it eye-catching (editor’s note: I’m also biased as D.Va is hands-down my favorite Overwatch character, just sayin’…).

A handful of others such as an inquisitor from Warharmmer, a trio of raptors and a really nice Lighting (from Final Fantasy XIII – and I have always been a huge fan of the character despite many Final Fantasy fans deriding her as a ‘boring female Cloud’) were also really impressive. Even when I was simply standing in line waiting to get into the main conference room for the opening ceremonies, there was a lot to see, which certainly made the time go by faster. 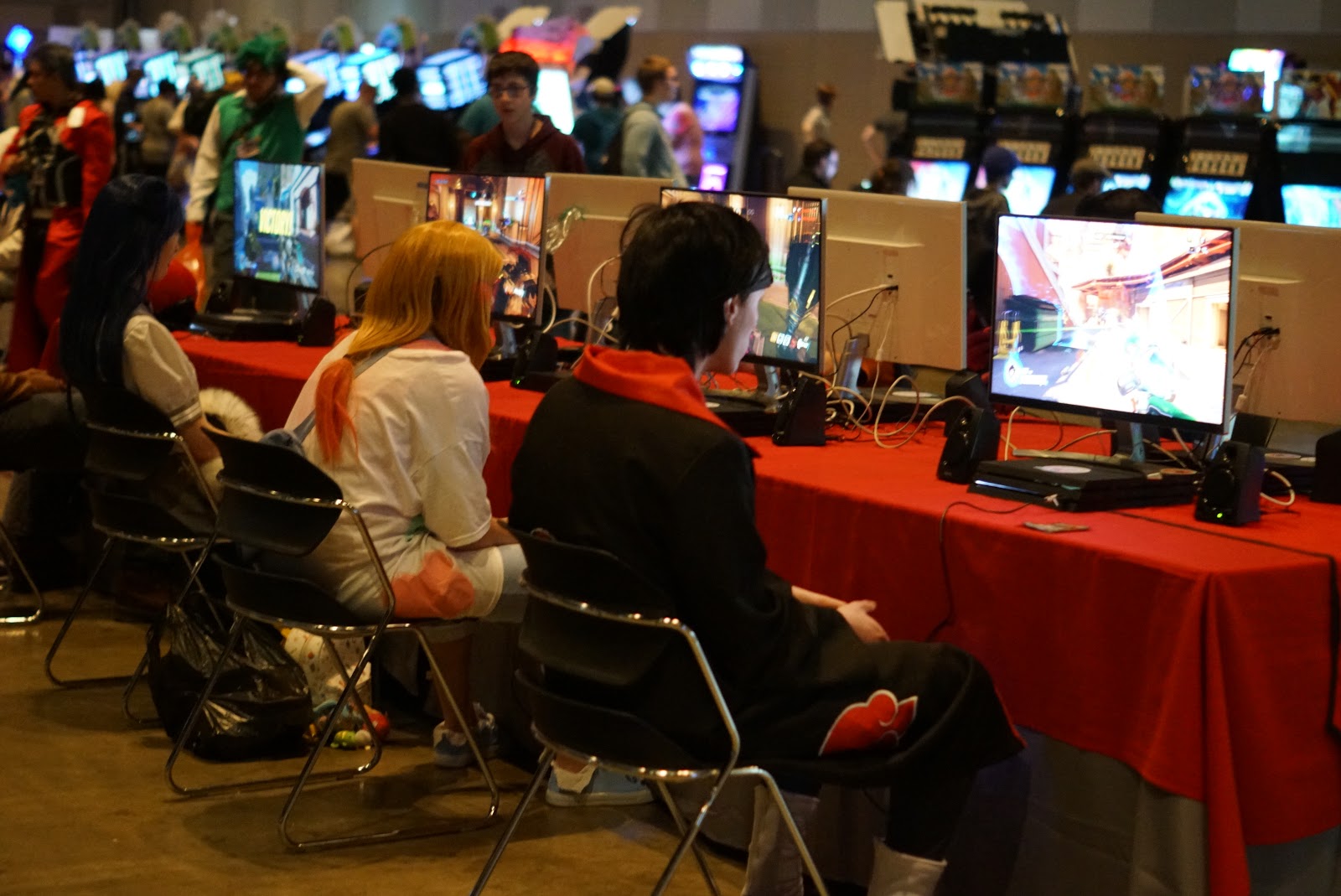 And there we have it – Part 1. This has already turned into a pretty lengthy write-up with lots to look at, and we haven’t even kicked off the conference officially. Check back for Part 2 soon where I begin to talk more about the planned events and touch on more of the aspects of Shuto Con 2018 that I really enjoyed, and the handful of areas that I felt could still be improved upon. 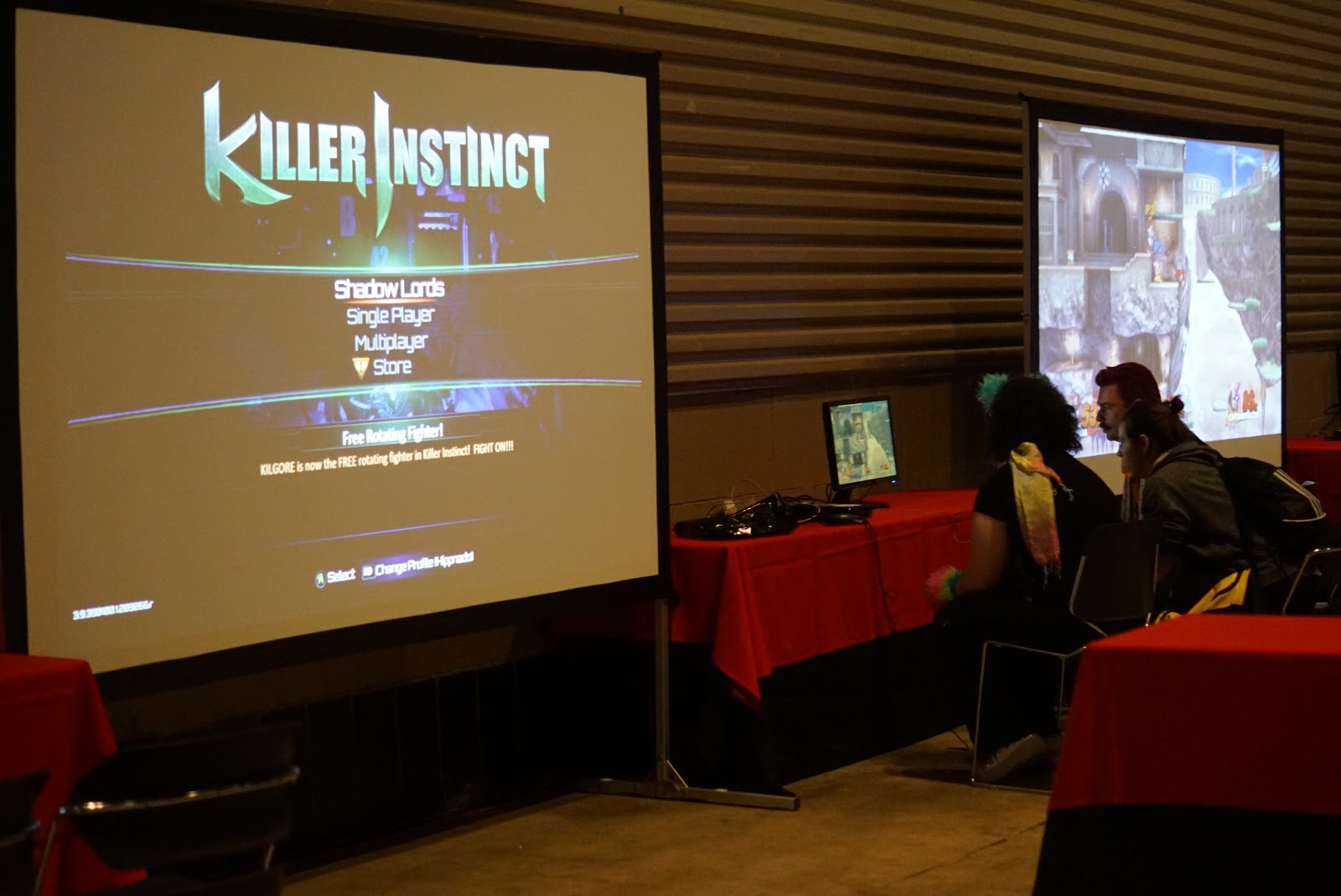