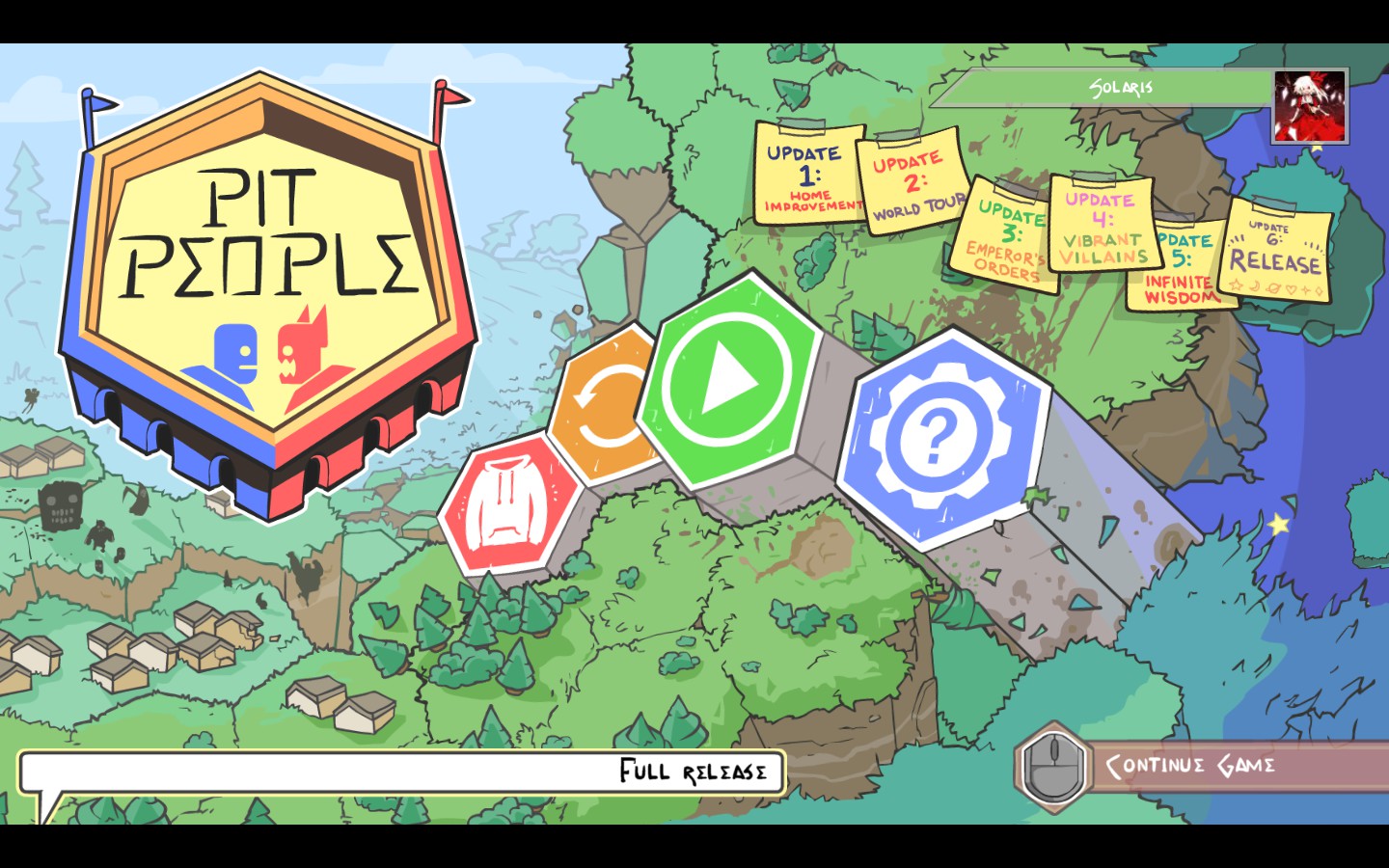 Hello glorious adventurer, and welcome to the world of Pit People brought to you by The Behemoth, those same wonderful people that brought us Castle Crashers. With their signature art style and humor, prepare to submersed in a weird world that’s a mutated cross between Pokemon, X-Com, and toilet jokes. So hoist your trousers and prepare for some questing, because shit is about to get weird and beary.

If someone asked me what the plot of Pit People is, I would probably answer “yes”. There is, generally speaking, a weird overarching plot-line that incorporates some of the main characters, but it’s almost entirely bad jokes, good jokes, weird, and bears. So I suppose what I’m trying to say is that the plot isn’t very important here, but if I were hard pressed to answer, it’d be a tale of a man and his son overcoming impossible odds, and science.

General game progression will happen through picking up main quests in your city, venturing out to complete them, and then returning. There are also a bunch of side quests with their own storylines as well, which can be taken before leaving, and a bunch of “instant quests” on the world map that you can pick up while on the go. Like Alphonso’s birthday party, and he didn’t invite you, what a dick! And he was murdered by his party guests, and they didn’t invite you to that either! Or you can bring your friend to Tinkletown! 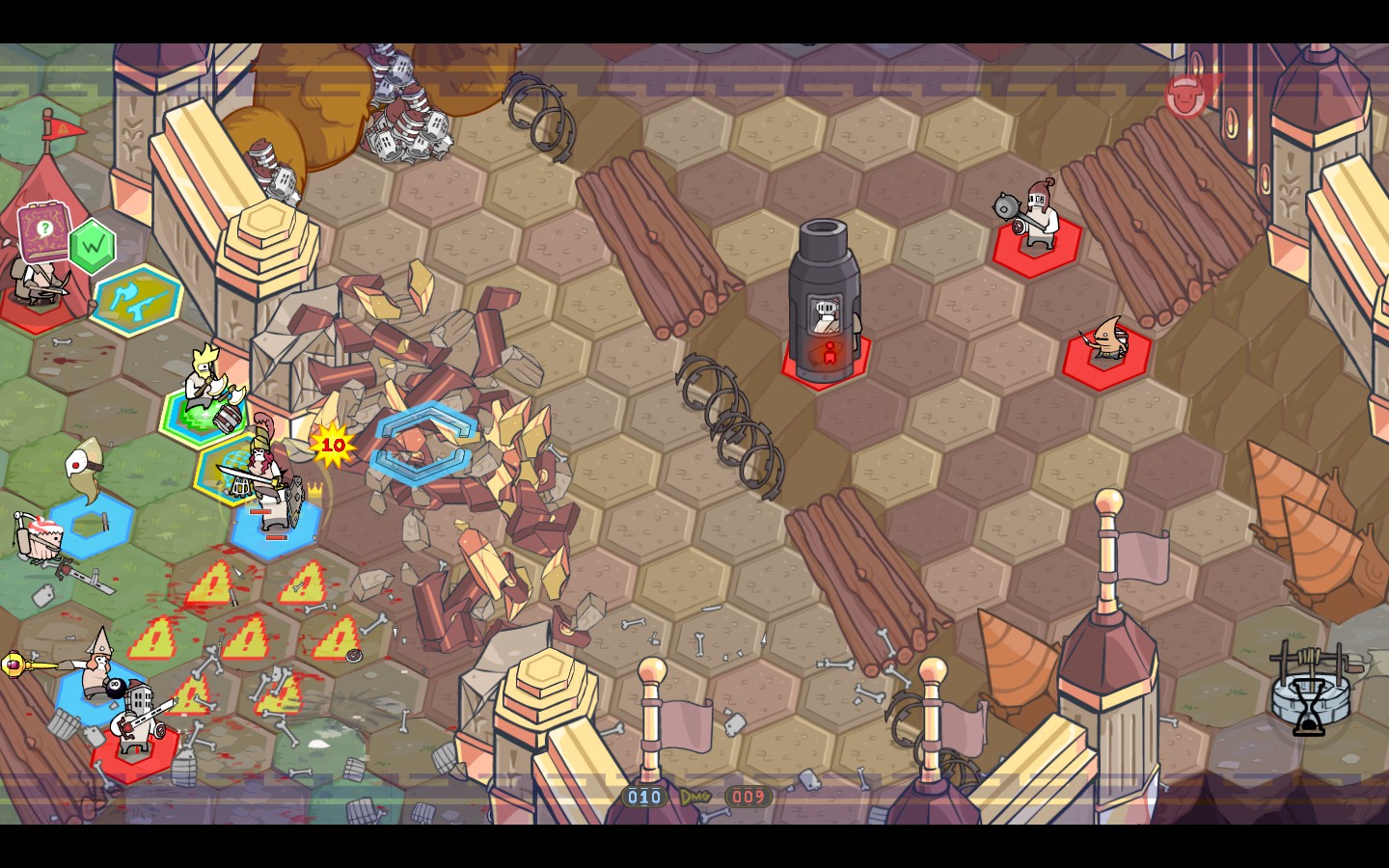 So how does one go about partaking in this wonderful world of slapstick humor, demiclops, living cupcakes and poop jokes? Well, it’s quite simple, really. As mentioned earlier, you have a town where you can shop, recruit party members, equip your party members, and participate in the “unfair arena challenge”.

When you leave, you can roam around the forest looking for fights. Getting into a fight, you generally start on opposite sides of a hex grid map. You then take turns alternating between your team moving and attacking, and the enemy team moving and attacking. There are ranged moves and melee moves, and certain types of armour are either more or less effective against different types of weapons.

Unfortunately, here is where the wonders of the most benevolent and merciless of RNG gods come into play. Basically, as long as your turn ends with your movement onto a tile where you can attack an enemy from, you will, generally speaking, attack ONE enemy. This means that if you’re surrounded by a bunch of enemies and want to escape by killing the squishy ones, pray you attack the squishy ones and not the big burly one that doesn’t care if you’re attacking him with a tank, much less that tiny toothpick you call a sword. 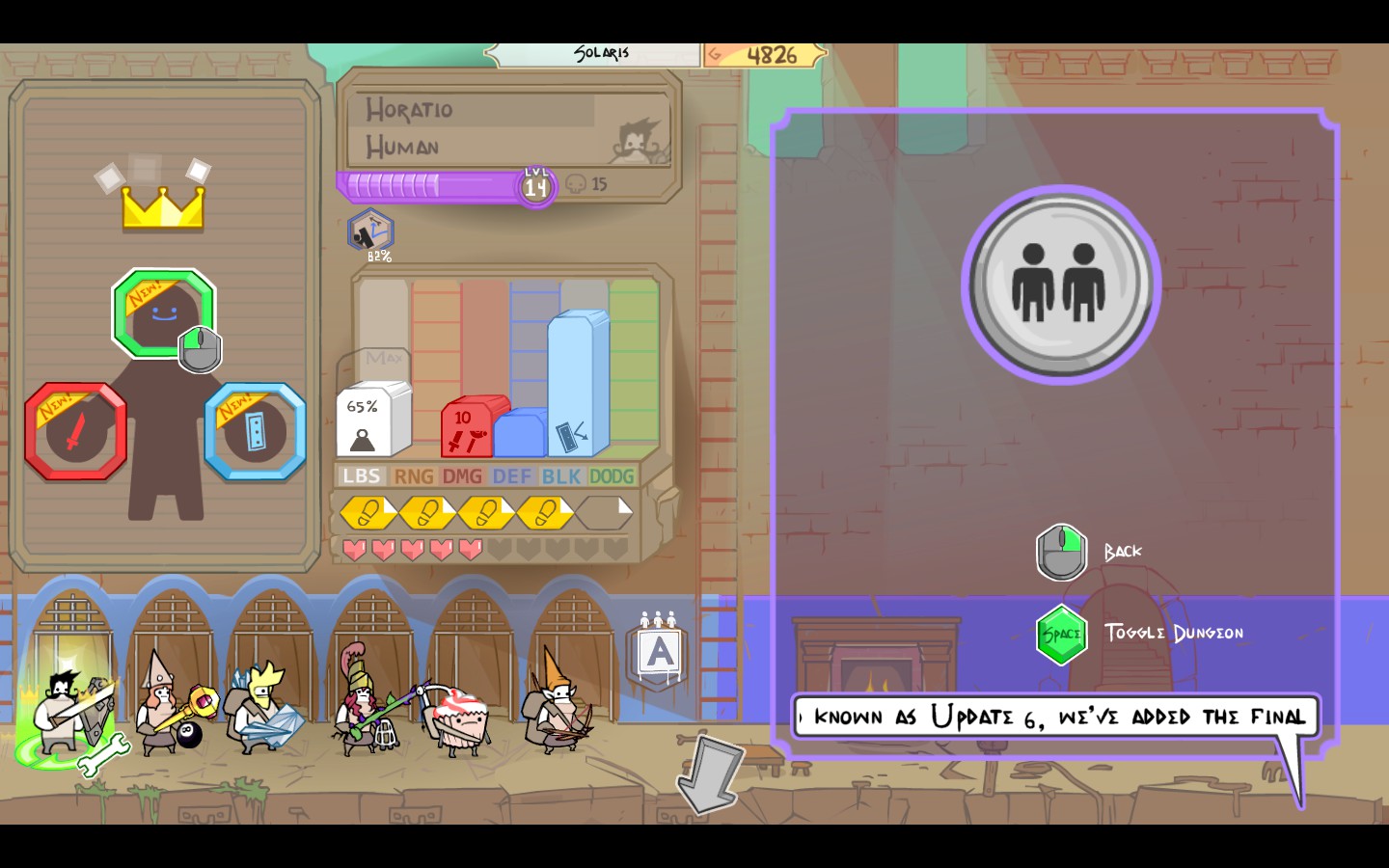 There is a neat little blocking mechanic, where the bigger and heftier shields have a higher block chance, but tend to be bulkier, which affects your equip limit. The Pokemon aspect gets thrown in when you find out you can actually catch enemies as long as they’re the last enemy left alive on the field and someone has come equipped with a capture net, and you have a free cage. Upon completing your quest, you will return to the city, retrieve your rewards, spruce up your party with the captured units, and then head back out to go beat some baddies faces in.

Supporting both a local and online co-op function, you can grab a buddy, or find one, and play with them too. Team composition is a fun and exciting experience, with a wide variety of possible minions, some requiring multiple spots in your roster, each with their own positive and negative aspects. Perhaps you’ll have a horde of giants, or a mushroom bonanza?

With some humour that’s really on point, a load of characters, quests, and items to mess around with, and a surprisingly large world map to travel, Pit People is one hell of a chaotic journey, but definitely a fun one.