comments Share
You are reading
City of Brass – PS4 Review A Tasty Recipe For Rogue-lite Delight

Other than Crypt of the Necrodancer and Invisible Inc., rogue-lites usually fail to hold my attention for more than a dozen hours. I love that, like in real life, they require practice, hard work, skill, and a lot of luck to make meaningful progress. I appreciate that, on an absurdist level, any progress made, besides the knowledge obtained, is rendered nearly meaningless upon death or failure, since said failure strips you of all earnings and demands that you restart from the beginning. But the one characteristic that makes me lose interest faster than a lion loses interest in a rotten cucumber smothered in animal deterrent spray is the gosh-damn procedural generation.

In most rogue-lites, procedural generation is purported to make each playthrough “NEW!” and “UNPREDICTABLE!” and “LIKE SEX WITH A BEING COMPOSED OF SWEDISH LIGHTNING AND NORDIC THUNDER!”. In actuality, it renders the environments and level design surreal in their heartlessness, exhibiting the impression that, at best, these crucial aspects received only an imitation of creative human sympathy or, at worst, that they were fabricated by a rogue algorithm inspired by the rugged uniformity of the prison toilet system. To put it bluntly, while I understand the utility of procedural generation, my soul generally flees my body through my retinas any time a game touts it as a “FRESH, IMMORTALIZING!” feature.

However, like the two games aforementioned, City of Brass – a first-person rogue-lite with a vivid Arabian Nights veneer – shows that if you have an enchanting art style, enemies that are a pleasure to duel and manipulate, and a combat system that’s rhythmic and versatile yet simple to execute, procedural generation can become less like a vapid maze of eyesores and more like a tool that actually contributes degrees of surprise and suspense.

Imagine you are Aladdin, but instead of befriending an awesomely erratic genie or wooing some ironically stinky princess, your passion – no, your obsession – is to infiltrate a cursed city of treasure, loading every pocket of your fanny pack and every crevice of your toned, bronzed anatomy with ambrosial gold! Gold coins! Gold statues! Gold pottery! More gold than a hypnotized sultan could be duped into spending in 6 lifetimes. The problem is, the city is infested with a variety of laborious traps and demons, former would-be thieves who tried and failed to journey their way to the city’s central trove of unspeakable riches.

Thankfully, you came prepared for such resistance; with a scimitar in your right hand and a whip in your left, you will (hopefully) be the first to slice and crack your brave bod to the heart of the city, by conquering thirteen stages (twelve stages and a final boss) with a moveset that proves to be as useful as gold is savory. You can carve and flagellate enemies. That’s obvious. But the whip can also be used to stun, drop a demon on his boney buns, disarm weapons and traps, knock back projectiles, pull enemies into slicing range, collect riches and throwable items, and swing you out of (or into) deadly pandemonium.

And it can be a gosh-damn blast. When a skirmish becomes particularly rambunctious, with five-plus demons taking swings and hurling fireballs at your unarmored loins, the relationship between the sword and whip transforms into a duo capoeira dance synchronization of crowd control. Combat is replete with situations where you will, in one sequence, push an armless demon into a spike trap, pull a sword-wielding demon into trap door, spin around and crack a fire projectile right back into the face of the wench who lobbed it, then whip-grab an explosive urn to toss it into a group of animated skeletons that the red, burly bastard-of-a-genie refuses to stop summoning.

Speaking of bastards, the enemies are just too fun to beat up on. They cover their booboos when thrashed in the head, and look as confused and frustrated as a kitten on ice every time their legs are wacked out from beneath them. And the manner in which they soar across the sand when struck with an explosive urn? Don’t even get me talking about it; it’s too good. Moreover, these dudes and dudettes pursue and attack you with absolute reckless abandon. As soon as they spot you, their sole mission in death is to hunt you down, pierce you with pointy objects, and (most likely) bury you up to your waist in sand (so they can presumably rub gold coins on your chest, tauntingly). And they never stop chasing you. Never ever. So if you’re thinking that sprinting into another area will halt their pursuit, you’re as wrong as gold is (presumably) good for the chest skin.

Of course, being a rogue-lite, City of Brass can be a disaster of difficulty. It feels like it took me just under a year to make it past the sixth stage. But don’t be fearful or fretful; recall all that gold you’re so inclined to collect? Well, not only does it dictate your score in online leaderboards, but it’s also used to purchase all manner of helpful tools, from a phantom warrior helper to weapons and armor with elemental attributes. One of my favorite weapons by far, so far, is a mystical club that severely increases knockback, allowing me to manhandle foes from one end of a room to the other. 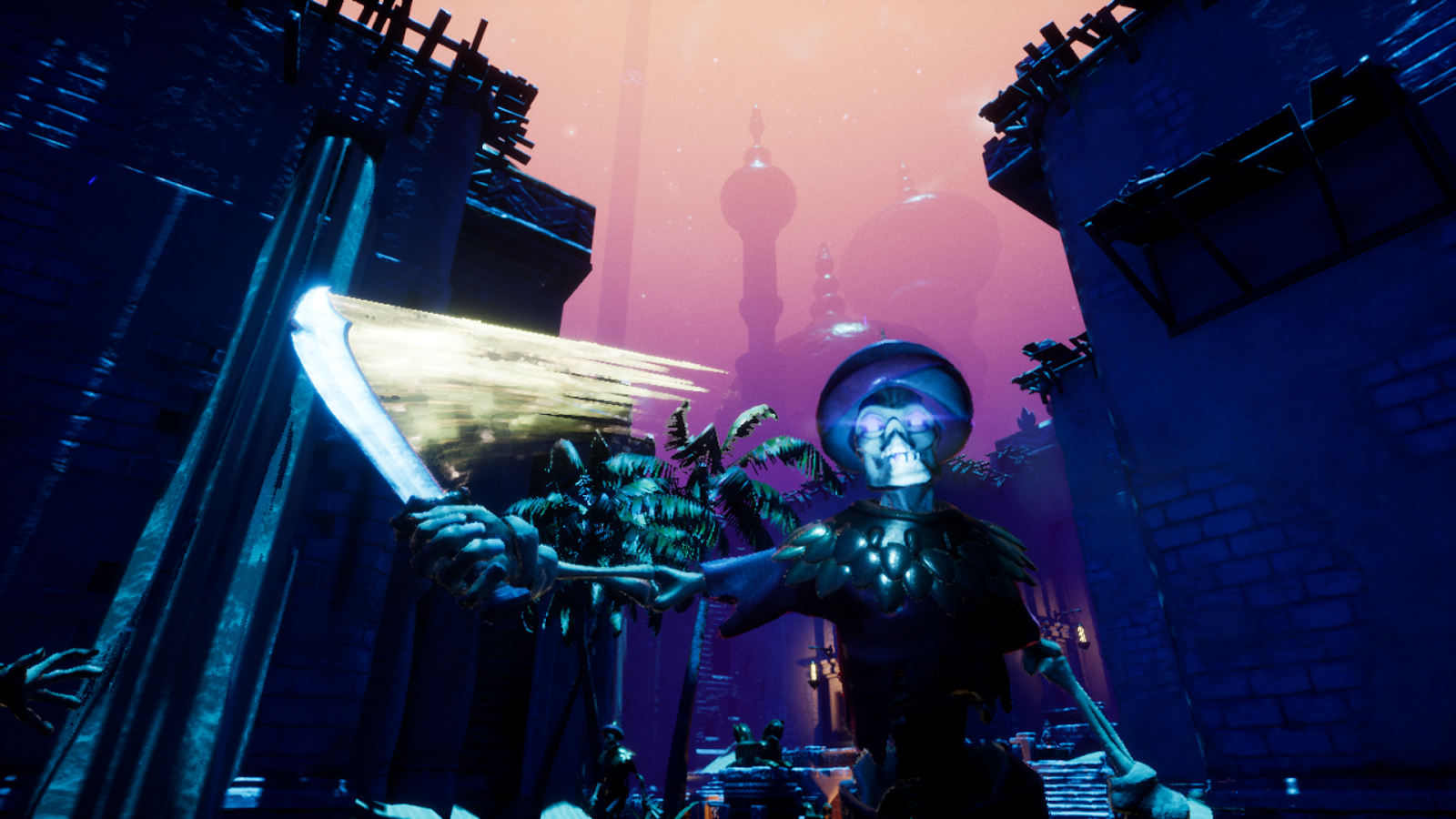 If helpers and weapons aren’t enough to instill you with confidence, checkpoints are unlocked every third stage. That is, if you manage to best the mini-bosses that guard the keys to the path you seek. And still, if the game manages to be too difficult or too damn sissy, you can curiously fondle the Blessings and Burden settings, which lets you increase or nerf stats and characteristics, such as health, your and enemy attack damage, and enemy aggressiveness, to name a few options. A word of warning, though: if world notoriety is important to you, know that activating Blessings will disqualify you from the leaderboards. Depending on which ones you activate, they can make the game way too sissy for my taste; inversely, Burdens are only fit for the buffest or most experienced of thieves.

Unfortunately, not everything in City of Brass shines like gold polished on the chest of a subdued intruder. For one, like almost everything that operates on the Unreal 4 engine, this game makes my base PS4 run like it’s attempting to initiate time travel. My PS4 sounds like a DeLorean blazing through grasslands at 87 mph five minutes after starting the game.

For comparison, God of War, one of the most visually splendid games on the console that I’ve had zero technical issues with, doesn’t tax my system nearly as hard. I understand that this may be an optimization issue. But I definitely would not have been stymied to find myself back in the 1980’s after finishing a run of City of Brass.

Secondly, character movement takes a little bit of time to adjust to. Really, the turning feels way slower than it should. Your hero turns as though he’s standing nipples deep in a snowbank, and he’s terrified of said snow making contact with said nipples as he’s figuring out the best route to warmth. From what I’ve gathered online, this may be an issue unique to the PS4 version of the game, since it’s the only version that runs at 30 fps. Regardless of the issue being present and baffling at first, it becomes a workable character flaw once you get used to it. Thirdly, auto-aim and hit detection can be amazingly inaccurate and irrational on rare occasions. Regarding auto-aim, your whip will sometimes refuse to strike exactly where intended. If you’re trying to, say, separate an enemy’s sword from his hand, the insubordinate camera can snap from the hand to another body part. Or if you’re trying to trip an enemy by aiming at his feet, the camera can snap up to his torso, causing you to miss the trip attempt, resulting in a headbutt to your chin. Regarding hit detection, enemies have managed to headbutt me from ten feet away. Enough said. Fortunately, these issues were not prevalent or problematic enough to transmogrify City of Brass into City of Irrational Ass.

You’ve probably noticed that I haven’t mentioned anything about CoB’s use of procedural generation. That’s because, similar to my experience with Crypt of the Necrodancer and Invisible Inc., I was too engrossed with the gameplay to pay it much mind; it made me amnesiac to the soporific effect of the coldness of algorithmic level design. Don’t get me wrong; even though CoB’s environments aren’t as cold in composition as most titles in its genre, thanks largely to its first-person viewpoint of an Arabian Nights aesthetic, they still feel empty of the screams and whispers, the elevating voice, of unique artistry. But that’s fine, I suppose; when procedural generation has gameplay this inspiring to play off of, and when it contributes to producing moments of genuine uncertainty, it can prove to be a supplemental blessing rather than a downright visual burden.