This week I’m going to talk about two things. The first will be about the new story content launching for Guild Wars 2 and the second is reviewing the World Health Organization’s ruling on video game addictions being classified as a mental illness. Let’s get started! 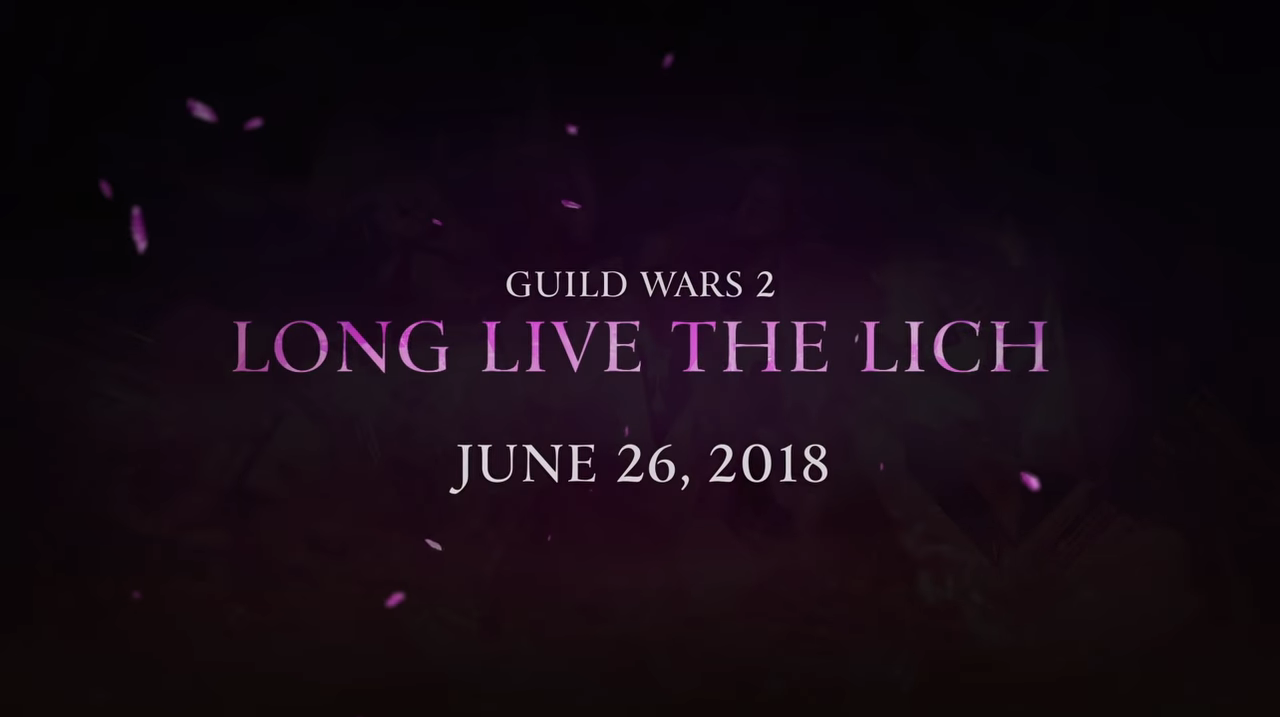 Earlier this week ArenaNet finally launched the long awaited story trailer for Season 4 Episode 3 titled “Long Live the Lich” and fans have been patiently looking forward to it.

I’ve covered previous episodes of Guild Wars 2 in other Jaggy’s Corner’s and we’re picking up where we left off. Joko and his minions are still wreaking havoc on Tyria. The other few times player’s have faced this enemy, he has bested them and run off. Now, players are going to war with him.

Let me just say that ArenaNet continues to amuse me with their presentation. Joko has a sense of humor, “10 seconds to curtain. Places for act one please! Places for act one. Break a leg people.” Already, viewers are sucked right into the trailer’s story because Joko is waging war. This is the moment we’ve been waiting for. (Hopefully. I want to take down that little pansy.) Of course, our plan is to meet him head on. It’s going to be nuts.

In this next episode, players gain access to a new Legendary Warhorn called Verdarach. A new map releases called the Domain of Kourna. A new fractal called Deepstone launches where players will kill an ugly spider. Also, the fractal contains some interesting looking traps. New story content will push forward the narrative. The Tyrian champions hopefully come together to face Joko and his undead army. Finally, there is a new roller beetle mount. A beetle! Honestly, just check out the trailer to see what it looks like. It looks awesome and I want it! Anyways, the trailer ends with Joko saying, “End scene.”

I love the general design of this trailer. Players likely won’t get a chance to face Joko just yet (we are only on Episode 3 after all), but I can’t wait to beat him into the ground. The people of Tyria have taken down the elder dragons and before that, Scarlett, and we’ll succeed in defeating this foe.

The new story will release for players on June 26th but be prepared. Historically, when Guild Wars launches new content, the servers have been a bit wonky. Be prepared peeps! There will always be day one bugs.

Check out the full trailer,

Earlier in the week I was hoping to cover this particular topic. Instead, I will cover the topic here. Buckle up peeps!

The World Health Organization (WHO) made a ruling. Gaming addiction is now categorized as a recognized mental illness. The BBC originally announced the new ruling and the outcry has been astounding.

First, I’d like to chime in. Yes. I do believe that gaming is also an addiction that can cause people a lot of harm if not dealt with properly – like any other addiction. I once knew someone that had issues functioning if there was no internet connection (although, that wasn’t just because of gaming. It was an addiction to the internet itself.) When I say ‘issues’ in this case, what I mean is that this person had full on panic attacks, crying fits, etc… It was as though nothing could be done to fill the void left by the power outage/internet company updates/etc…

As with many addictions people are subjected to, there will be different reactions. Some can’t function properly, as I explained above, while others become violently hostile. Plenty of people have highly addictive personalities. If it isn’t gambling, it’s smoking. If it isn’t smoking, it drinking… People become stuck in patterns of behavior much more easily than others and gaming is just another medium.

If that seems weird with video gaming, think about years ago when Blizzard included a system message in World of Warcraft that said, “You have been playing for 1 hour. Go take a break.” Today, in Twitch Streams, people have become so focused on their stream that they have forgotten to eat or drink. In fact, streamers have died because of it (although, keep in mind that those people died due to years of poor habits.) As a result, there are bots specifically designed to remind people to perform basic functions like drinking water. So yes, I do recognize that gaming addiction is just as real as any other addiction. It does have some negative affects for people in all age categories. Thus, I’m not discrediting the need to deal with such an issue.

My issue with the BBC article and WHO ruling, is the amount of time they deemed to qualify gaming as an addiction. The ruling given was that 20 hours is enough to warrant such a harsh reaction. It is significantly less time than what most gamers consider to be appropriate. In fact, while I’m about to reference a Twitlonger post written by a friend, I would like our readers to understand the gravity of the determination. In this post, Alex details his own life and mathematically calculates how much time he spends on various social and school activities. Based on his explanation as well as my own personal experience, I tend to agree with his thoughts on the matter.

When I was younger and in high school, I spent significantly more time than 20 hours watching Television. If not that, I practiced playing my Clarinet rather than completing other homework (though playing the instrument was part of my homework, so it wasn’t necessarily an excuse). I also spent a lot of time riding my bike, socializing, dancing, and learning to program in computer languages. I spent time painting models (like Warhammer figurines and cars), beading, and learning how to play board games. Yes. I spent a lot of time around and on computers. An argument could be made that I too am addicted to gaming. However, as most of you many know, writing for video games is effectively my main profession. Even with all the time I sink into video games (for fun or for review), I spend a fair amount of time volunteering, attending writing events, getting together with friends, and watching movies. I can guarantee you that I spend infinitely more than 20 hours a week on video games. Yet somehow, I still have plenty of time to do other things. Tell me, am I addicted too? In my case, it’s not something I do for fun, it’s also my career path. However, I’m old enough to know that bills need to be paid, chores need to be done, and exercise is key to maintaining a healthy lifestyle.

Many people are going to argue that because playing video games is my profession, that it makes sense to play more than 20 hours per week on them. However, others will play more than that time because they are trying to make video gaming into a profession. People who watch a ton of television aren’t trying to make that into a career. Just because the rest of the world outside of gaming doesn’t understand why the industry is so large, doesn’t mean it should be discredited as a valid means of escape. To date, the video games industry has brought in millions of dollars to businesses, fostered tourism, and has helped many young adults learn life skills. Video gaming as a career teaches the younger viewers about professionalism, major issues in the world (like net neutrality and the importance of voting), and forces them into running business (like being self employed through streaming). ESports has become large enough that the Olympics will have a eSports division in 2024. (And there are many websites that covered the pros and cons of this particular topic). So, while WHO makes the video game industry seem bad with their ludicrously low ruling, video gaming has some major benefits.

Here’s the problem: people want to find creative ways to blame video gaming for everything from violence to attention disorders to depression. None of those things can be blamed on video gaming. Parents are responsible for their children’s upbringing and often (not always) people turn to video gaming and television as a way to escape reality. People are depressed. People are upset with the political climate. People are disgusted with complacency. Yet no one stops to think, ‘maybe these escapisms are becoming more prevalent because the world fucking sucks.’

“What we’re doing then is over-diagnosing, we’re sort of pathologising a behaviour that for many people is not harmful in any way.”
– BBC News, WHO gaming disorder listing a ‘moral panic’, say experts

Video gaming at 20 hours is not an addiction for plenty of gamers. In my opinion, that low of a number serves as an easy way to over medicate the populous or to force people into paying more money for treatments too early in life. Video gaming is not the root of the problem, so stop using gaming as a scapegoat for bad parenting. Again. (The industry has gone through this kind of thing before).

At the end of the day, people are pushing their problems onto other people instead of taking a stand against actual video gaming addictions. I’m talking about the kinds of addictions where people aren’t going into work, paying their bills, or medically suffering as a result of their gaming habits. Even then, the issue is more likely depression or anxiety or other such legitimate mental health issues. I don’t believe that the BBC and WHO did enough research to back their diagnosis, and several sites have called them out on it. I’m inclined to agree with the same article quoted above, where the author states:
“The decision to class gaming addiction as a mental health disorder was “premature” and based on a “moral panic”, experts have said.”

I’m inclined to agree in this case.

I’m super excited for the new episode in Guild Wars 2. I want to take down Joko after all the harm he has caused. So remember, it releases on Tuesday, June 24th and it’s going to be an awesome time.

I don’t think the BBC and WHO did enough research on video gaming professions and how that could affect the ruling. I want to know what happens from this point to see whether or not WHO imposes solutions. Video gaming addictions can be difficult to diagnose, as with any medical ailment, and I think more research needs to be done before a true ruling could be made.

What are your thoughts? Do you think 20 hours is too low of a number? What should be done about it?
Let us know in the comments below.