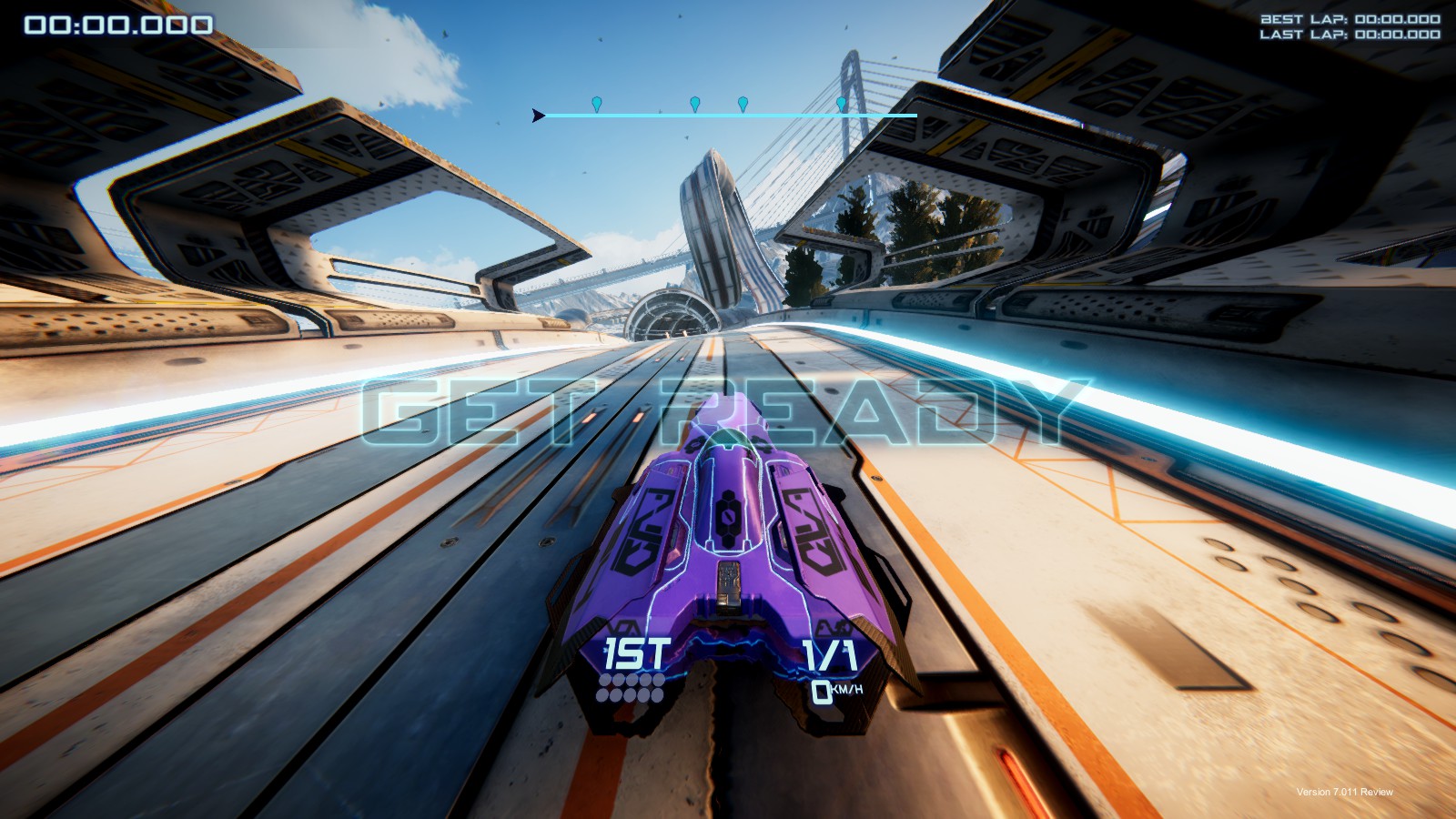 This game is everything I want in a racing game. It really does feel a lot like F-Zero in the sense of how it plays, looks, and its ship designs. Antigraviator excels at providing players with amazing background music that doesn’t break a players concentration. And considering the speed at which players can accelerate to, concentration is important.

The Music and Graphics Design 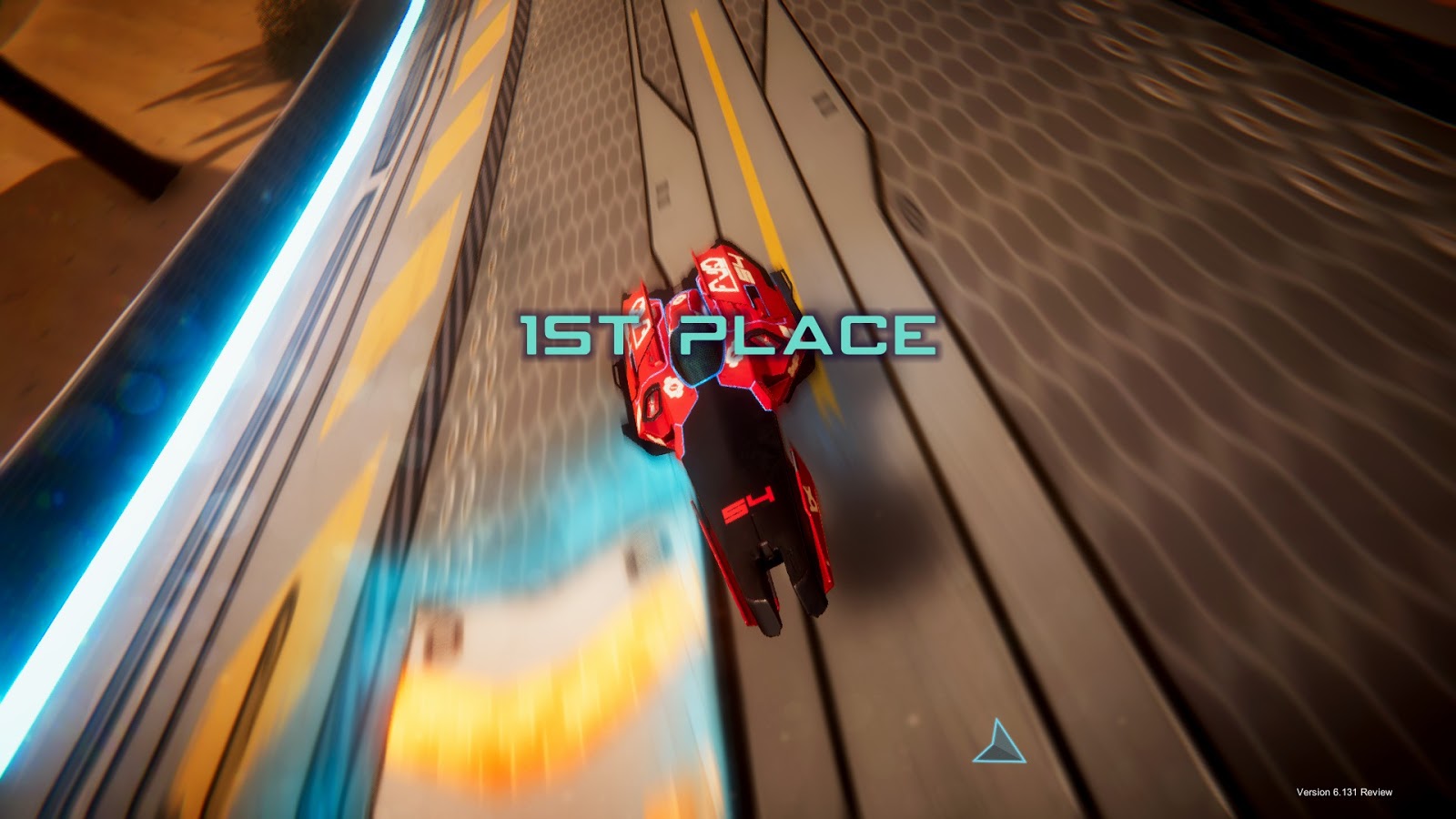 Unlike other racing games out there like Grid, F1, and Gran Turismo, Antigraviator has a more futuristic and almost sci-fi look. That’s even true when playing on courses that are set in the desert. It looks polished and sleek, showcasing various ship-like tunnels with flashy lights and boost pads to kick players along.

The design of the game is gorgeous in every aspect. The colour palette is bright enough for players to see the boost pads, most of the time, and is still complimentary to the environment of the track.

Each track is titled and one caused hysterical laughter. The one I’m talking about is entitled “Michael’s Bay” and I’m sure it will be popular to play online. At least we know that the developer, Iceberg Interactive, has a good sense of humour. (You get extra props for that track title by the way.)

Antigraviator is accompanied by a futuristic music backdrop that doesn’t distract players from achieving their goal, to win first place. This is important to me because I find other racing game music does not fit as well as it could. And if the music is wrong, then my focus is likely to shift. Nothing is worse than driving with music that doesn’t compliment the driving experience. And I definitely don’t like losing in racing games because of something silly like that… 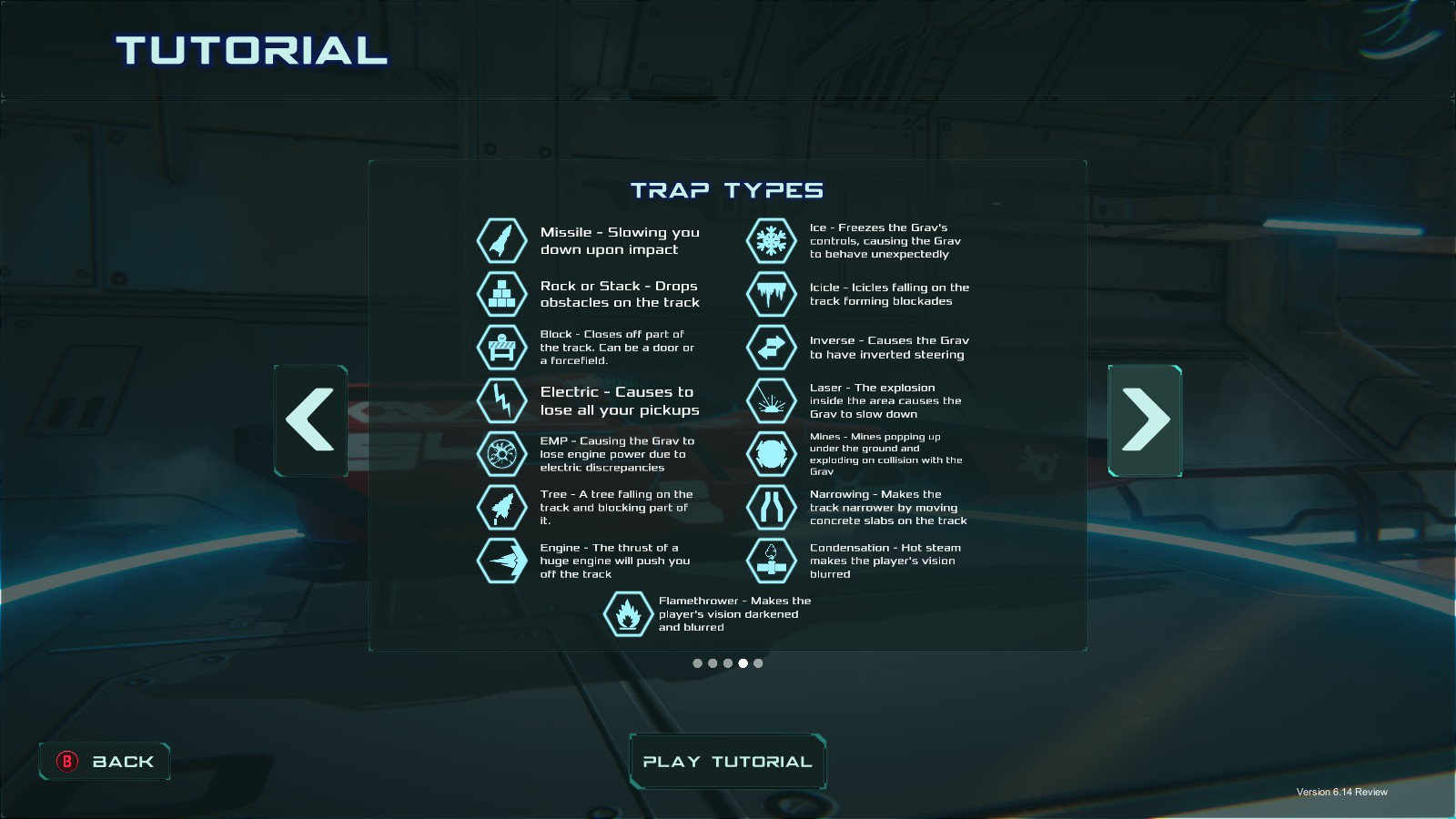 I said before that this racing game is fast and I’m not even joking. The developers added a motion blur effect that really hammers home the idea that the players are moving at 500+ Kilometers per hour. That said, it can cause a challenge to play because the motion blur effect blends the scenery together in such a way that often obfuscates the track. As strange as it is to say, there was a map where the desert background blended with the track to cause me to lose focus for a second. The result? I crashed head long into a wall. It was wholly my fault. That crash was a result of my hitting boost, rounding a turn to hit a boost pad that I didn’t know was there. It was both comical and shocking at the same time. Lesson learned, this game is all about speed but control is infinitely more important. Knowing the track will help in the long run.

Now you might be wondering what happens after a crash. Unlike more ‘realistic’ racing games where players must front the repair costs, this game doesn’t penalize you. From what I’ve gathered, the game gives you currency to be able to buy the other vehicles or features. Other than that, this game is designed to just pick it up and go – another feature that I enjoy. Vehicles and addons are not race gated like in others. In fact, the player gets to race on any course of their choosing without the need for unlocking. Sometimes a player just needs to race, ya know?

And also unlike other racing games like Grid or Gran Turismo, the vehicles in Antigraviator have excellent immediate acceleration. Most racing games invoke a five second penalty or a financial cost associated with a death, but not this one. So, in order to be successful in this game, a player must learn the tracks and handling of the vehicle quickly. If not, you’ll always be doomed to make 8th place. What this means is that Antigraviator is a game hinged purely on player skill. 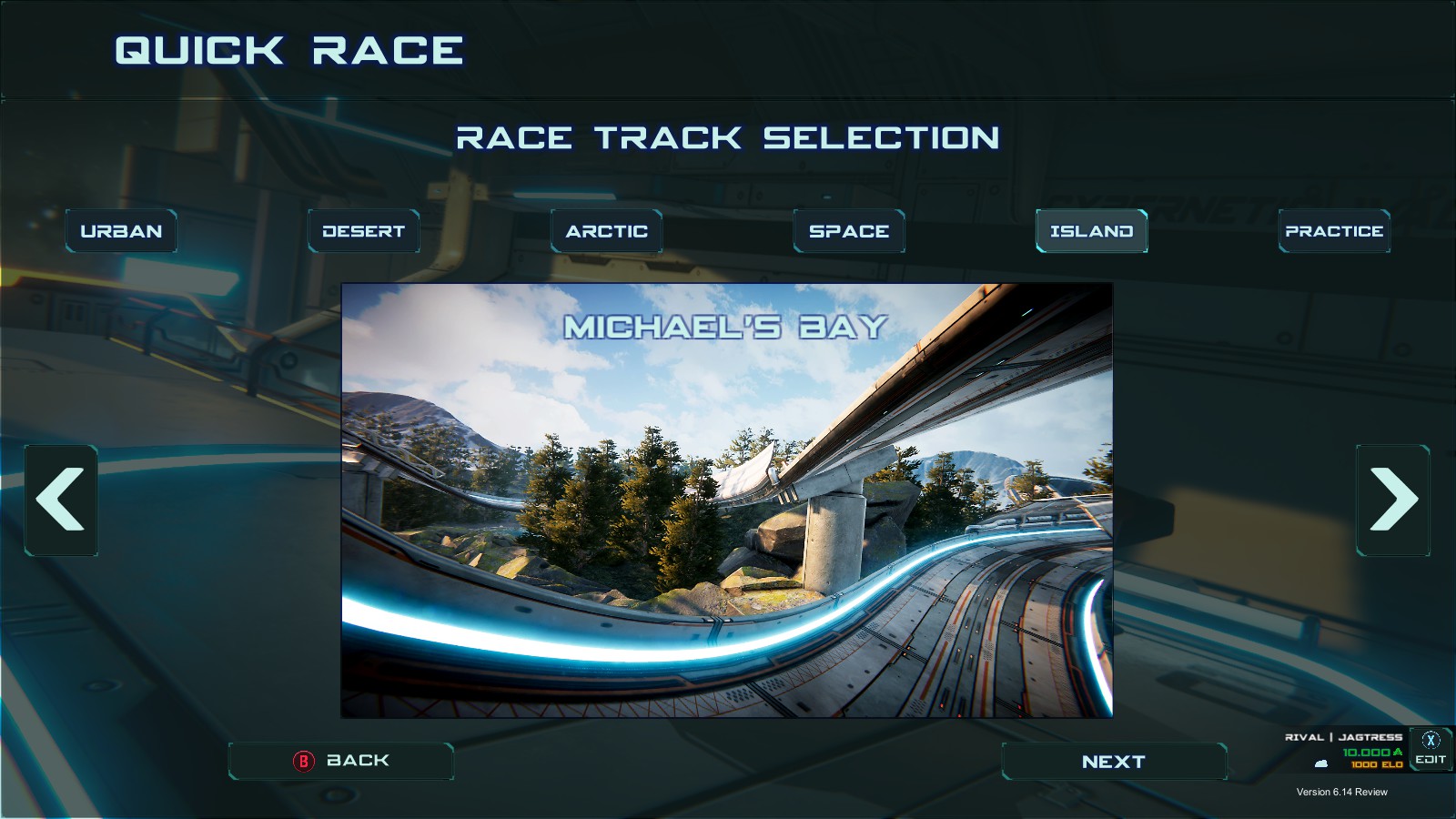 The first in game feature that I’ve abused is the ability to do a barrel roll! I’ve often opted to use the barrel roll over attempting to drift turns. It’s a feature that has become integral to gameplay for people like me. You’ll just have to try it out and see for yourself.

That said, it can be very easy to get turned around in this game. Thankfully, I have not received the “wrong way” warning often, but since this game is bent on speed, it is something to be mindful of. At one point, after the colossal crash in the desert, I ended up with this warning because I was facing nose down.

The second feature I like about Antigraviator is being able to set traps for opponents. It’s a card taken out of the Mario Kart books, and it’s a feature I enjoy. Causing friendly mayhem in this way achieves a fully entertaining experience without forcing players into a cartoony game. (That’s not to say Mario Kart is bad. I quite enjoy Mario Kart, but having a game with graphics that are tailored for adults is nice to have.) 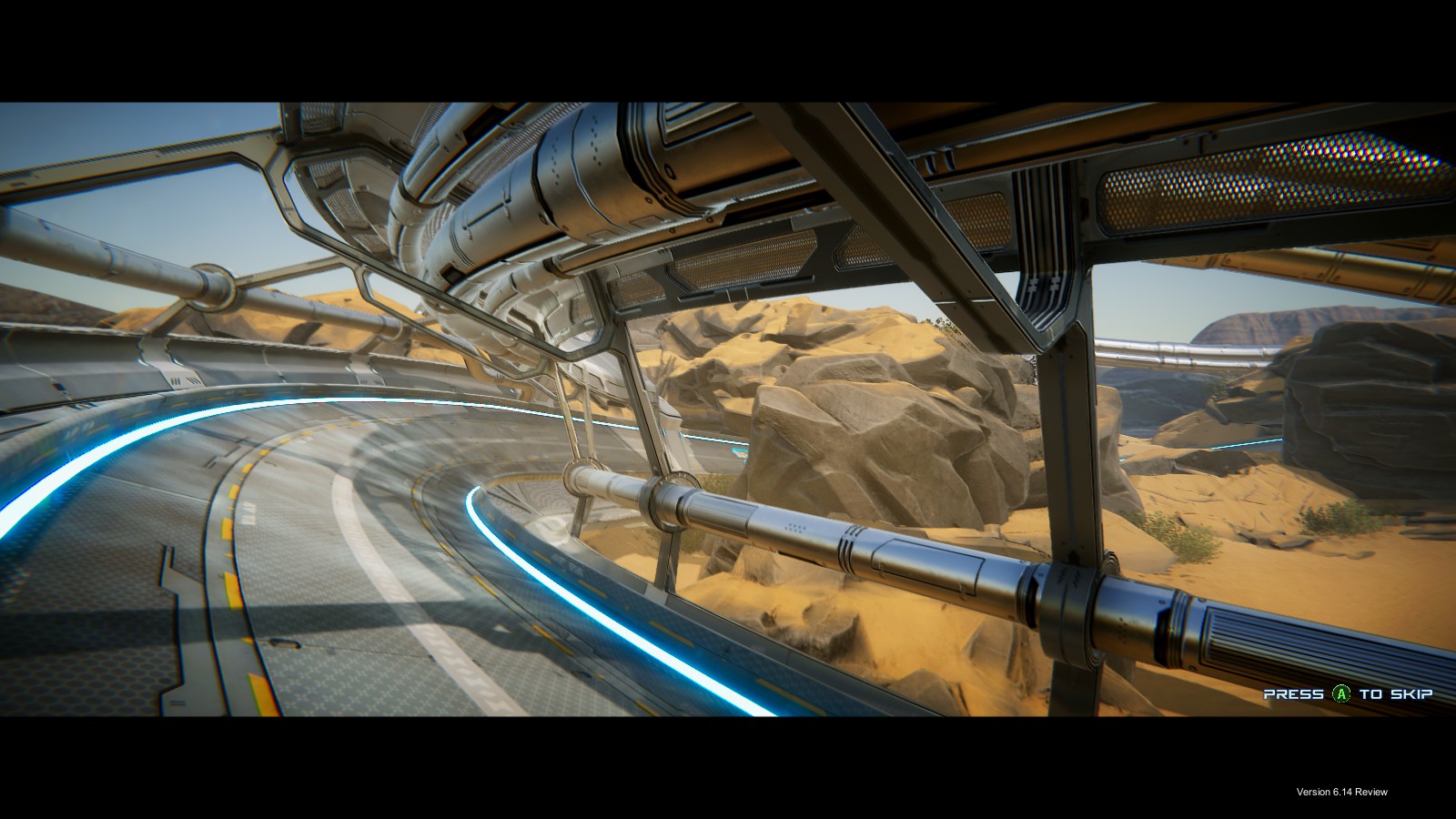 Players can purchase and customize their vehicles to suit their needs. Much like F-Zero, each car has a bar for acceleration, handling, hull strength, shield duration, and pickup storage. The vehicle you start with has decent levels in each of the categories, making it the most balanced choice. Depending on a players style, other racing vehicles will focus on one or more of those elements. Essentially, find one that suits your individual style and go race! I’d love to see more than three or four choices in vehicles but otherwise, I like that there is a bit of variety.

A thing I noticed about the game is despite the handling abilities of the vehicles, the downforce is well done. It’s not something that is easily explained but in a game like F-Zero, the vehicles felt light. A small tap of the analog stick caused the vehicle to zip from side to side. Antigraviator actually achieves a level of smooth turning without making the car seem like it’s heavy. I find this to be both a good and irritating feature. It’s good in the sense that balancing a vehicle’s feel in a super fast racing game like this is normally challenging and they were able to execute it with ease. I only find this irritating because of my love for drifting. I need a lighter feel of a car to achieve that, though I don’t consider it to be a hindrance on the game. This is likely why I abuse the barrel rolls so much…

What can I say? I’m a drifter.

Racing to the Finish 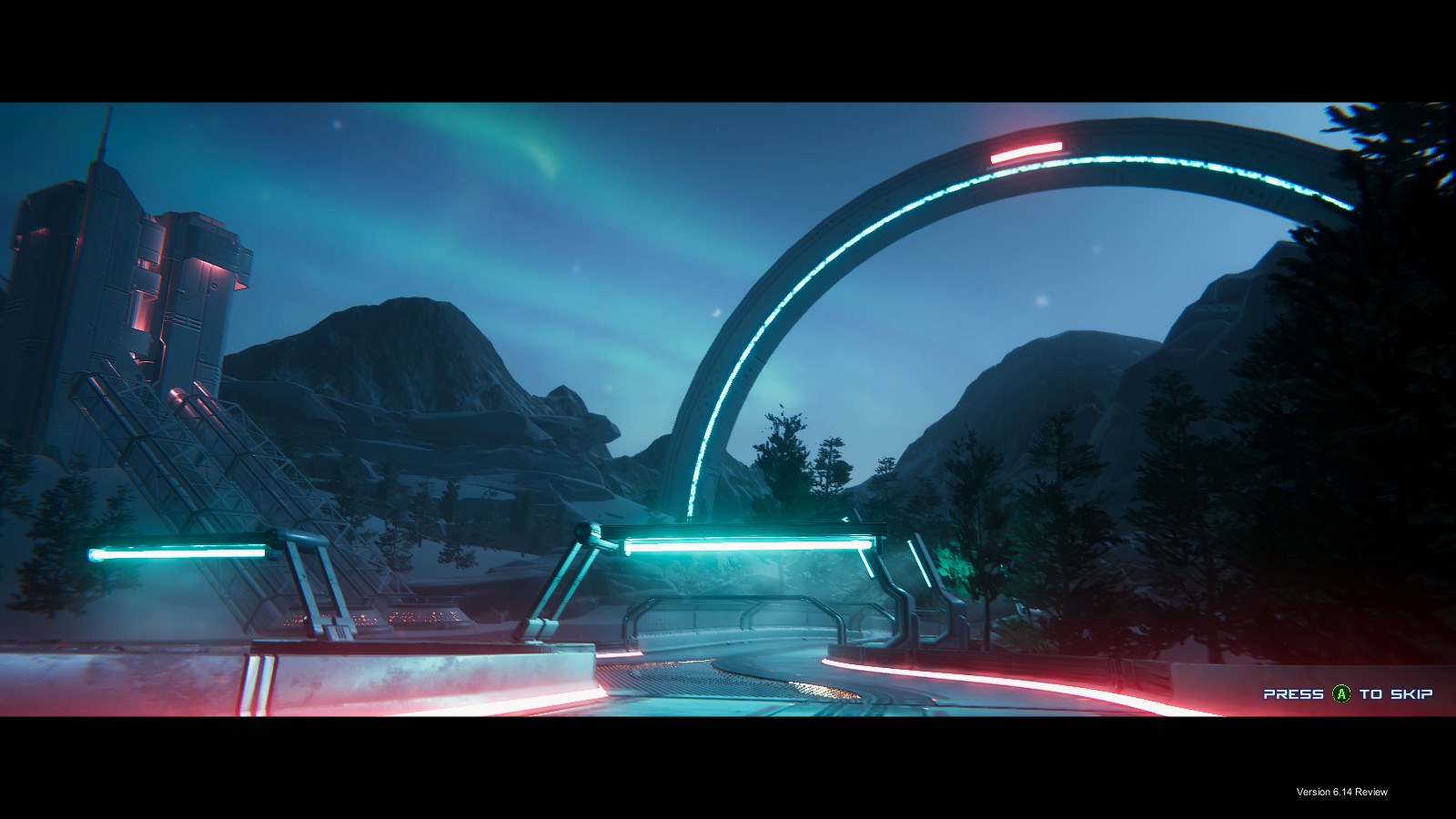 Antigraviator is a long awaited PC game for me. It fulfills a need of having a racing game that doesn’t anger me. I say anger because no other racing game compares to Gran Turismo – a game I have high regard for. This game fills a different need when it comes to racing, and that is to have something that fulfills the need for pure speed. In short, it is a sleek and fun racing game that can be played solo or can be played to cause mayhem with your friends, making Antigraviator a racing game not to miss out on.

Overall I give this game an eight out of ten. It’s polished and entertaining even if players have to concentrate a little harder at the beginning to win.

Give your racing heart a boost by checking out the game when in launches on June 6th on Steam.

I look forward to seeing everyone on the track!