This weeks’ news consists of a new patch called No Man’s Sky Next, an announcement for Stardew Valley’s Multiplayer, and Psyonix released some huge Rocket League news for the upcoming RLCS season.

The free patch for No Man’s Sky recently launched and it has caused people in the gaming industry to take notice. Last year, when No Man’s Sky was made available to the general public, the consumers were angry. The developer promised a ton of features but delivered none. Sean Murray addressed the Press with buzzword articles, constant delays of its release, and many more blunders! Needless to say, the game went down in history as one of the biggest disappointments.

Steam, in an extraordinary and different stance on their refund policy, allowed players to get their money back even if more than two hours were played (which is the maximum allowed to be played to qualify for a refund on Steam). To date, because of the massive upset, it maintains more than 80,000 negative reviews. Most of the games sites gave No Man’s Sky poor scores and the general concensus was that it was dead on arrival… until now. 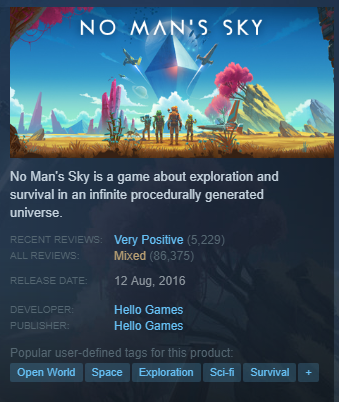 Hello Games, the development team behind No Man’s Sky, obviously had a great vision and they set out to right the wrongs of the past. It was clear that No Man’s Sky was released much earlier than intended, which is largely in part what led to the negative reviews on Steam.

To give a brief summary of what has been changed, No Man’s Sky has been completely overhauled. At the beginning, there were some quests, alien languages, and minor crafting features. Later, two updates released that brought in base building, ground vehicles, and a complete graphics change. Once Atlas Rises launched, No Man’s Sky featured quests, freighter ships, a pseudo multiplayer mechanic, and another graphics overhaul. Finally, Next launched a few days ago and has inspired enough people to write positive reviews on Steam. Over the last week, it has garnered more than 1k positive reviews bringing the games status to ‘mixed’.

How did that happen?

Well, in case you aren’t willing to fork over $60 USD for a game that was essentially a shell, we have all the information right here.

To summarize No Man’s Sky: The Complete New Edition (Obviously that isn’t the title of it. The update is called ‘NEXT’), here is a list of new features:

In a way, it’s a good thing that gamers were willing to give a game that was kicked to the dirt and left for dead to rise from its ashes. Make no mistake. Despite the additions and changes to the game, and the precedent it has set, don’t let the story of No Man’s Sky be the expectation in gaming. Most games do not come back from the backlash. Most don’t have a development team of 14 that are able to redeem themselves.

As an example, perhaps gamers remember the debacle around Mighty No. 9. Remember that? You should. It failed horribly after being successfully Kickstarted in two days. (Someone give us a real MegaMan game and no one will get hurt! Editor’s Note: 20XX, *drops mic and walks away*) And while Hello Games has earned its success, it’s too early to expect that all companies will revive their games from the dead. I say that because there are still plenty of hot mess games and they are often abandoned.

No Man’s Sky has a $60 price tag and from my understanding, it appears to be worth it. While I’m not endorsing this game personally, I will reinforce a belief I have, which is let the reviewers, streamers, and Let’s Player’s give impressions of a product before the public makes any purchase. Various people have vastly differing opinions when it comes to products, and that should be taken into consideration. Don’t let this Cinderella story sing the praises of all future games because very few will have the chops. Yes. It is an admirable story but make informed decisions anyways. That’s all I ask for.

Anyways, here is a clip from CohhCarnage’s stream of No Man’s Sky. Take a look at it and decide for yourselves whether this is your style of game:

There is a large post about the upcoming addition of multiplayer to Stardew Valley. Many people, myself included, have been happily playing in the beta. For the uninformed, players can marry each other, have individual cabins, share the wealth, and even have the other players make up for the skills that they personally lack (like fishing).

The Stardew Valley Multiplayer Update will be out for PC, Mac & Linux on August 1st!https://t.co/WsIdIVW73Y

To summarize some of the upcoming changes on August 1st, players can expect the following:

After a killer Season 5 of the Rocket League Championship Series, Psyonix boasts an even better Season 6. Firstly, they are raising the prize pool to be $1,000,000. Additionally, there will be $100,000 on the line for the Rival Series.

Signups to qualify for RLCS and the Rival Series begins August 6th. As with last year, Saturday August 11th will be the NA qualifiers and Sunday August 12th is the EU qualifiers. This format continues for the subsequent couple of weekends. The Rival Series Play-In begins September 1st. Any players that are citizens in EU or NA and are 15 years old or more can enter the qualifiers.

What I’m super excited for is the official debut of Kyle “Scrub killa” Robertson from Scotland. He recently turned 15 and is ready for this season in RLCS. He has been a force of nature on the field and many have had him on their radar for quite some time. To illustrate my point, here is a montage of his plays thus far:

The reason that the Rocket League community has set their sights on this young lad is because of his list of achievements. Due to many tournament restrictions with regards to age and eligibility for prize winnings, he has competed in a few minor tournaments like weeklies. Most recently he placed second in Rival Esports: EU 1k Cup and won first place in the Twelve Titans showmatch series back in February of this year. Previously, he has placed first in the Gfinity Challenger series and GO4RL Europe. Here are Scrub Killa’s list of accomplishments.

Personally, I can’t wait to see the Scottish player tear up the arena this season. All of the details for RLCS can be found on the official website.

What do you guys think about any of the topics above? Are you jumping on the No Man’s Sky bandwagon? How do you feel about the multiplayer for Stardew Valley? And who is on your radar for Rocket League this season? Let us know in the comments below!

Until next time,
Article by Susan N.