Ever thought of having your own restaurant? How about one in a strange world with Spirits and Fallen Angels? What about summoning the aspects of food also known as Food Souls (such as Rice, Milk, Black Tea) to help you fight monsters in order to gather ingredients to serve at your restaurant? Well if this is for you then look no further. Food Fantasy is a unique type of gacha game (or hero collector) from Elex publisher of Clash of Kings that takes a new and fresh twist on the genre.

One of the “wow” factors for this game was its take on managing a restaurant and playing a JRPG at the same time. Not only did I find it exciting that I, as someone who can’t cook, was able to create food so good that lineups would be forming outside the door, but I could also scratch that itch for the single player progression at the same time. This is what makes Food Fantasy stand out as it has two unique parts to make one fully baked experience.

The first is the restaurant, were we need to hire staff to act as the cook and waiters for our customers. This restaurant becomes a “carte blanche” for how we want to develop it everything is left up to the user on how they wish for their restaurant to look and feel. The more ingredients we gather the more we dishes we can start to create. Imagination plays a bit of a factor when making new dishes, but a guide also helps to push us in the right direction. We use our Food Souls to help us act as a cook and waiters to maintain our store while we are out hunting for new ingredients or making deliveries to our clients!

The second is how the JRPG side is handled. As per the usual for a mobile game, the system Food Fantasy uses is energy with a world map that uses a linear choice progression with a 3 star rating system. Once you have achieved 3 stars you can quickplay the same levels for loot without having to replay the entire level. The combat is smooth but also requires a good composition of tanks healers and damage to not be rolled over. Throughout certain fights there are occasions when a monster will have a timer appear on them in several places. These timers need to be pressed on as quickly as possible, the faster we press them the better. 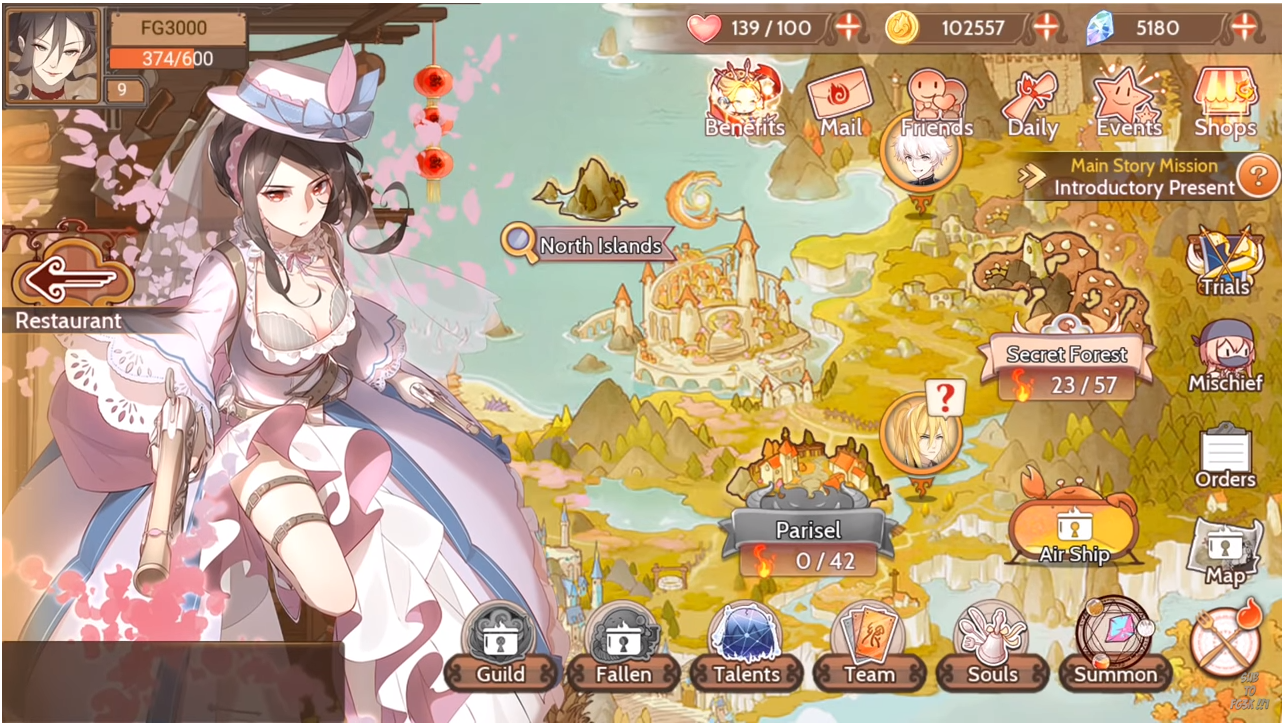 What this does is it interrupts almost a “cast time” before a very strong attack. Most of these attacks will 1 shot your entire party if left unattended. This also is the reason for not having an auto play feature in the game. A fight has special moves that each character can use as long as they have their counter-parts in the fight with them, but there is also spells that we can cast as well once we have built up enough energy.

We have the ability to pick and choose which skills we want through our leveling up and mastery allowing us to aid our food souls in combat. Things such as a damaging fire spell, or a heal, perhaps a defense buff. There are plenty of options to choose from and it comes down to either preference, or having a spell that your team composition may be lacking. These spells each have a cooldown and energy requirement, so do not spend them unwisely using your flames might be ok for dumping energy when at max, who doesn’t love a little bbq. But if it’s a heal or defense, its best to save those for either after a strong attack, or if we fail to interrupt the boss in time.

The Food Souls we summon often have a counter-part to make them stronger. For example we have Milk and Black Tea. By having both of these Souls in our party we activate the special ability that both souls possess. Milk gained an AOE heal and Black Tea unleashed hell on all enemies. There are tons of other combinations such as Chocolate and Coffee or Dorayaki and Sushi. Having the proper combinations can greatly increase your team’s potential in combat.

Most of the time I don’t play any mobile games with sound, but I couldn’t get enough oh how well done the voices were done for this game; even the background music had a nice ring to it. Tons of voice actors were casted to make sure this part was a hit!

Food Fantasy is a lot of fun to play with its great mix of elements. It has food, it’s a JRPG, its got tons of collectable Food Souls and it even has extras to do on your down time waiting for that energy to come back. A game after my own heart. On top of such an awesome game, I also want to give a shout out to the devs for actively requesting and implementing feedback into the released version launched just this last Friday.

If the F2P doesn’t turn this game into a massive pay to win, then it will remain a stellar success!