comments Share
You are reading
Hakoniwa Explorer Plus – PC Review 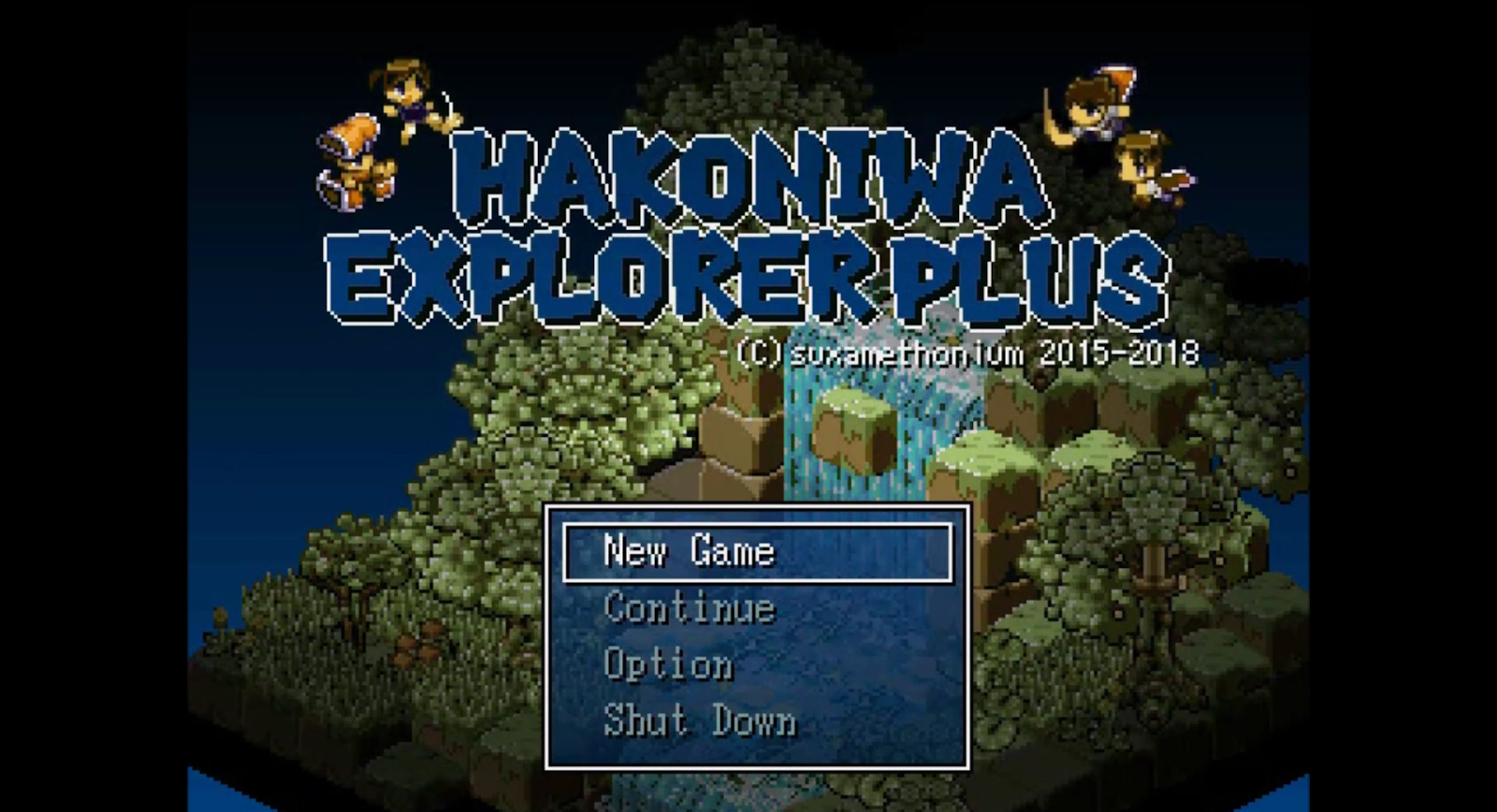 Do you like isometric beat ‘em ups? Equipment durability systems with a limited inventory? Freeform exploration and dungeon crawling? Boobs and butts? Well then, Hakoniwa Explorer Plus is a game for you.

Hakoniwa Explorer is most certainly a rather unique experience. Is there a plot? Not really, you can pretty much just randomly explore as you please throughout most of the game. There is something about getting a nice tan and being partial completionist, but that’s mostly the extent of what you need to know. Ultimately, Hakoniwa Explorer focuses more on the gameplay department, which can be gratuitously described as a combination of slapping enemies and item management.

Essentially you can choose your gender and name, and you then wake up in a house with a girl in a Japanese school swimsuit. Because why not. Turns out you’re an adventurer or explorer or something, and you beat up the local monsters for money. Controls are pretty simple, with arrow key movement, attacking and jumping with Z and X, and menu and item use with A and S. Which I discovered rather quickly, as the first thing I did was accidentally slap the girl in the swimsuit. She then proceeded to beat me up and take ten percent of my cash. 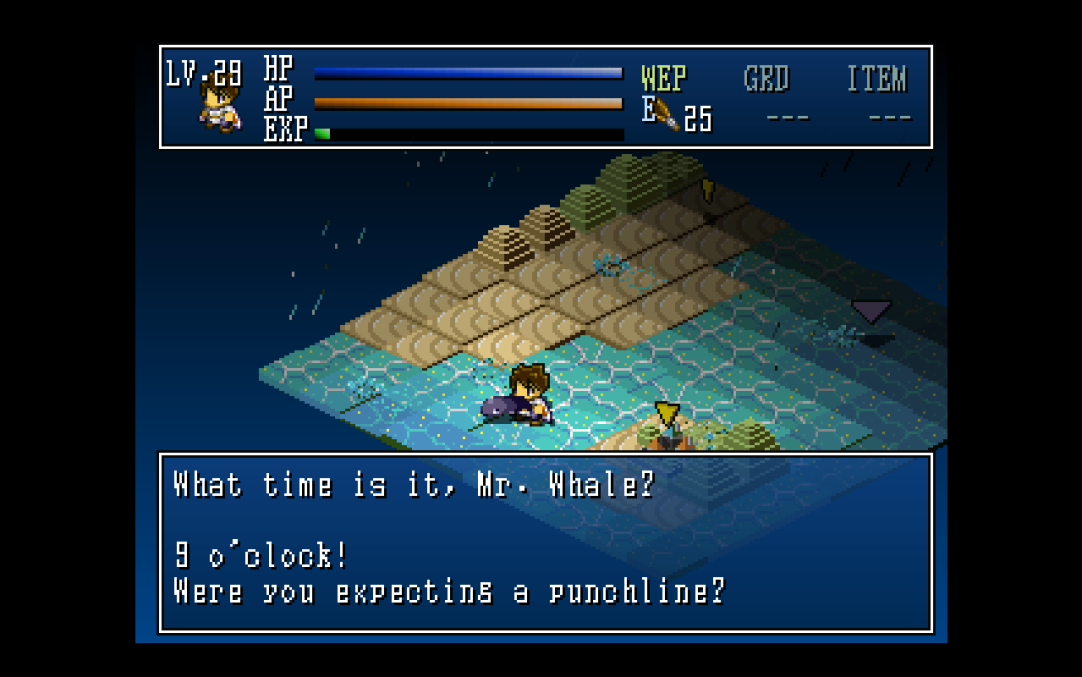 After that I found out that simply walking into someone is the “talk button”, as it were. Which would be fine if it weren’t for two glaring problems. First of all, if you walk up behind someone, you slap their ass, which is kinda weird when you do it to the cat or the old man, but if you do it twice, you piss the townsfolk off. And no, I don’t just mean “hey stop that”, I mean full on pitchfork mob, as everyone on-screen will start to attack you. Second issue is that sometimes people will sit in a doorway, and you can’t get through it because you keep talking to that damned old man. What makes this even more interesting is that you have a “grudge meter” for how displeased the general populace is. A few accidental but touches and some justified self-defense later and everyone hated me. Cool fact, if the townspeople in the desert hate you, they literally set you on fire. Like, seriously literally.

After you’ve gathered info from the townsfolk, they may tell you about possible dungeons nearby, that you must explore the world map to discover. World map and dungeon exploration are quite similar. You have an isometric grid that can show up to a 10×10 brick area, and as you move closer to the edges, more will show up as the area behind you falls away. I would have liked the maximum size of the shown area to be just slightly bigger, but the 10×10 was acceptable. On the world map, you can swing your weapon (or bare fists) to destroy terrain, and in dungeon you can do the same to monsters and chests instead. Those of you who recall I mentioned gear durability, here is where it comes into play. 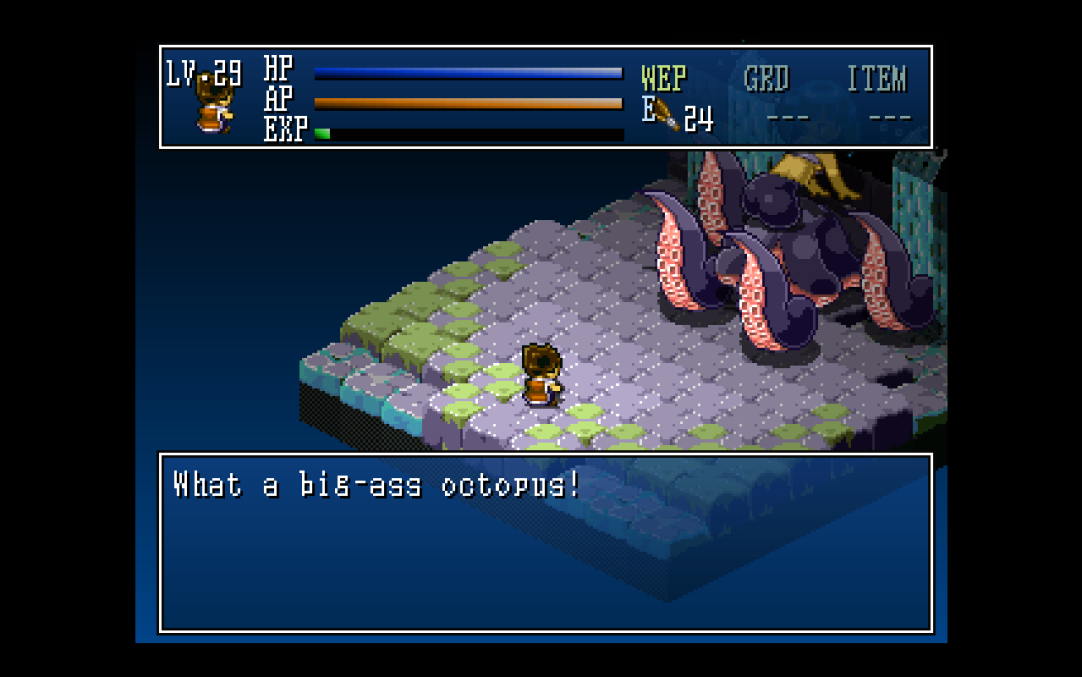 Both armor and weapons have durability that will decrease on each swing, regardless of whether you hit anything or not, so be prepared to swap gear on the fly pretty often. Unfortunately, your inventory is significantly more limited than I’d expect most people to feel comfortable with, forcing you to juggle between hording weapons, armor, and item, or leaving inventory space for picking up monster drops. There isn’t too much of a goal in dungeons other than basically “get through them”, and you aren’t particularly penalized for leaving, and if you die you only really lose ten percent of your cash. It can be rather aggravating to hit some of the enemies however. Especially the flying buggers, where I had a hell of a time figuring out where exactly they were hovering above.

Ultimately, most of the time I ended up leaving my weapon unequipped and just continuously used the default punch as much as I could. This was useful for standard enemies, but the bosses can be rather…unforgiving, to say the least, mainly because they can drain levels from you. Oh yes, the bane of my existence from Demon’s Souls is back with a vengeance. One of the first major enemies I fought was a succubus that I started the fight at level 24. I ended the fight at level 9. I wasn’t exactly pleased. 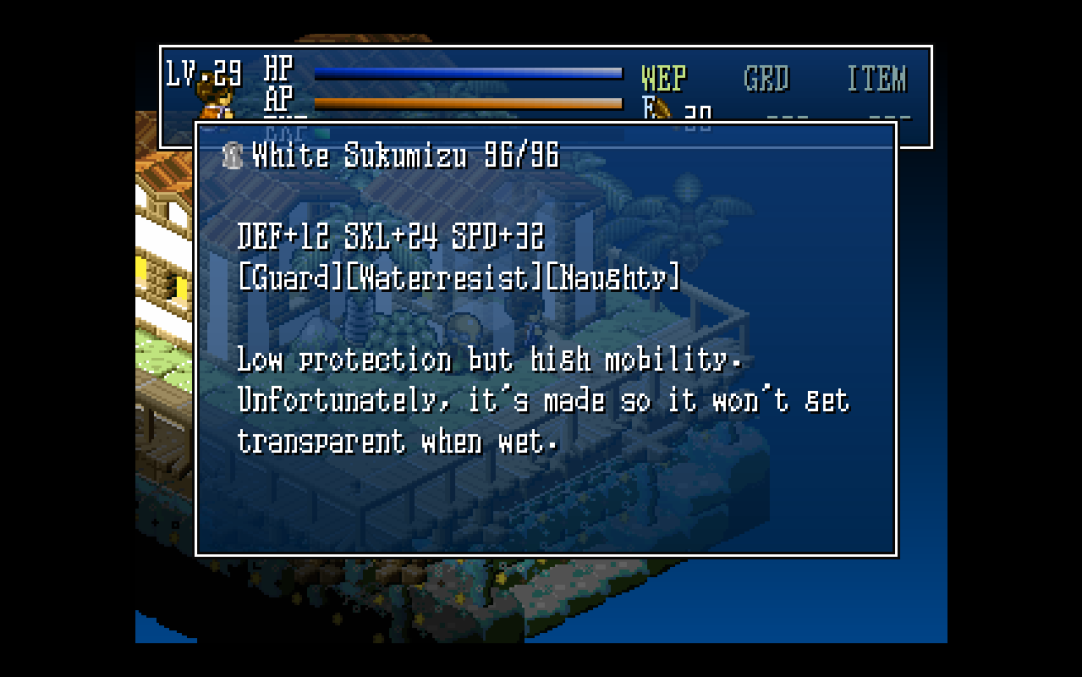 As you perform certain feats, however, you’ll earn in-game trophies. The more trophies you collect, the better the shops will be, in addition to the fact you can turn in worn out gear materials in for shop experience. Based on the degradation rate, I’d expect that to be very often. Occasionally the camera would give a really weird super zoom in during combat as well, which was super annoying. On the plus side, you can open the menu and swap gear whenever, even in battle, and you can basically save anywhere and anytime you want, for the most part.

Overall, I’d say Hakoniwa Explorer Plus is a quirky little adventure game with a lot of interesting gags, a solid base mechanic, although it may need some slight tweaking, and enough big boobed/butted large bosses to easily identify the improbably female boss cast. While there are a lot of aspects that need a little touching up, such as the supped speedy rate at which your weapons deteriorate, the gags, simple gameplay, and school swimsuits will probably have you coming back for more.