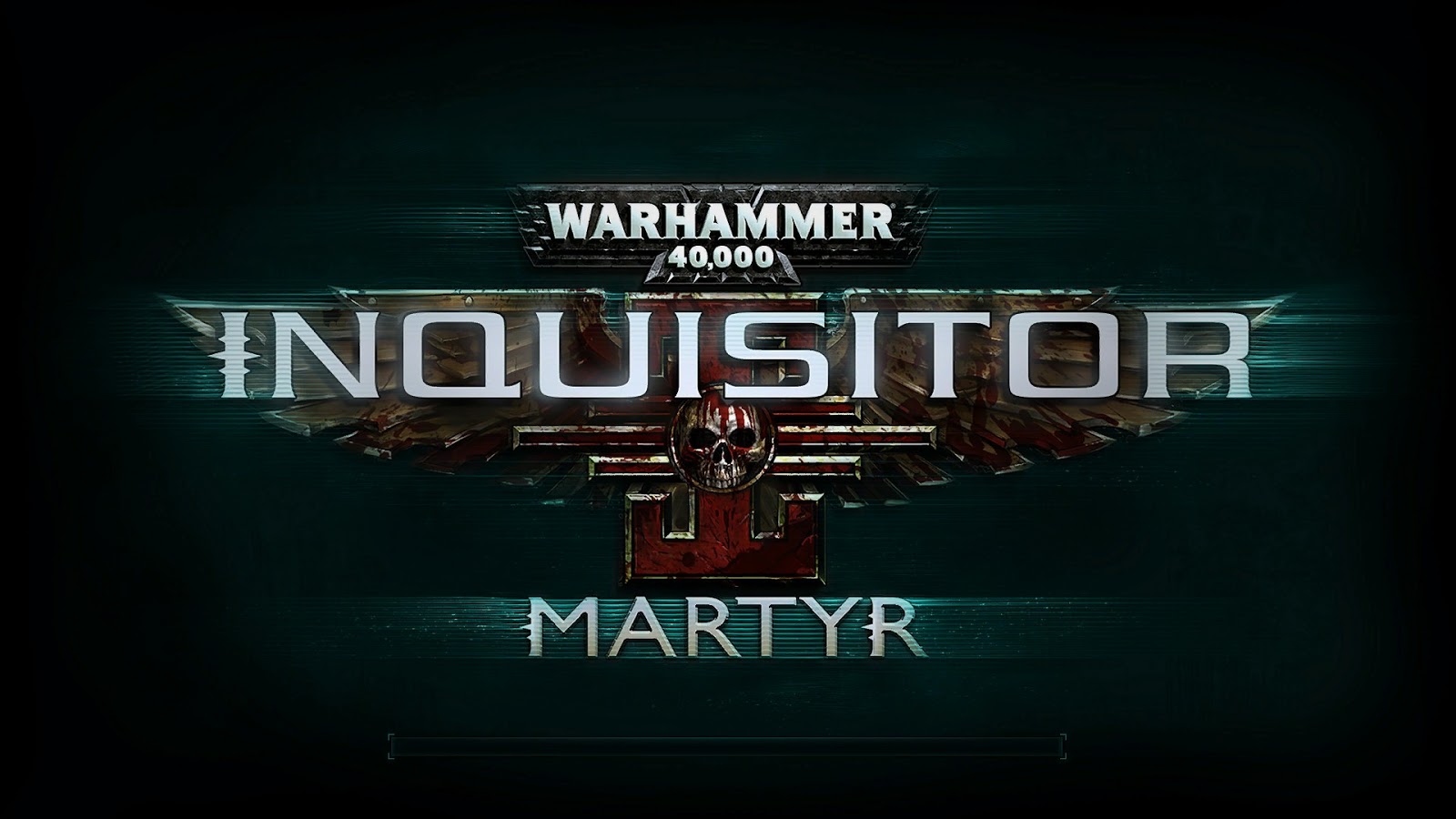 Earlier this year I had the chance to sit down to an initial bout of NeocoreGame’s Warhammer 40,000: Inquisitor – Martyr which is the follow up title to the dev’s The Incredible Adventures of Van Helsing 1, 2, 3 and the Final Cut. Put into the shoes of an Inquisitor in the Warhammer universe being sent to a seemingly derelict ship named the Martyr, you’re going to be shot at, charged at, spat at and have a generally unwelcome reception from the “locals”. It’s a good thing though that you’re a badass because you’re going to need the firepower that comes from your position as you will be often be single-handedly taking them all out on the way to your goal.

When I originally sat down to Martyr with Robert both of our reactions were that things were quite rough around the edges for a title that was moving into the final beta stages before release which was just a short time ago. Just to make sure that I played the smoothest possible version, I’ve waited a few weeks to make sure that everything was ironed out before jumping back into the space based crusade.

So if you’ve read the preview, linked above, some of the issues that I had are still there while others have been smoothed over through the versions. The main issue which is a little better now is that you are still stuck going through the entire introductory system with a new character. If you had a character before I want to note that they are now gone and the dev’s had mentioned as much that there would be a server wipe before moving into the final stages. At least now the introduction feel much smoother, faster paced and with all of the elements in place, fun. However as much fun as it now is, you still have to do it repeatedly for every new character. *sighs* So available for your space crusade are three overarching classes each with three sub-class options. The first of these is a Crusader which acts as the tank of the group, the second is the Assassin which is quick on her feet in either melee or from afar with a sniper rifle and the last of them is the Psyker who is essentially the Wizard of the three casting impressive feats of destruction to any in their path. Each of these three come with three starting options that help shape your character from an early stage in a manner of playstyle that is more appropriate to you. Starting off with the Eradicator sub-class, I had my Assassin ready for critical hits from afar until I also gave her a sword once she was better geared to literally jump in and decimate her foes before they even knew she was there. They say to give her a shotgun but a sword is so much more satisfying!

Unlike a lot of other ARPGs, Martyr is mission based forcing the player to make all of their preparations before launching out to tackle their objectives. This is honestly one of the points that I’m still on the fence about as near the beginning before the equipment started to get good it almost felt like it wanted to force you to join up with others in order to survive the even remotely tougher objectives that you have to pull off. As time passes things smooth out and your one-person army is more than enough to handle things on their own as long as you keep your surroundings in mind and make sure you aren’t swarmed.

The other reason that I’m also on the fence about the mission based structure is that preparation honestly becomes everything as once you launch, you cannot change a single aspect of your character’s gear until you get back. So basically if nothing good has dropped in a while, if the chests for completing missions have dropped you junk leaving you worse off than when you started and the captain of your ship’s store is crap, that’s too bad. 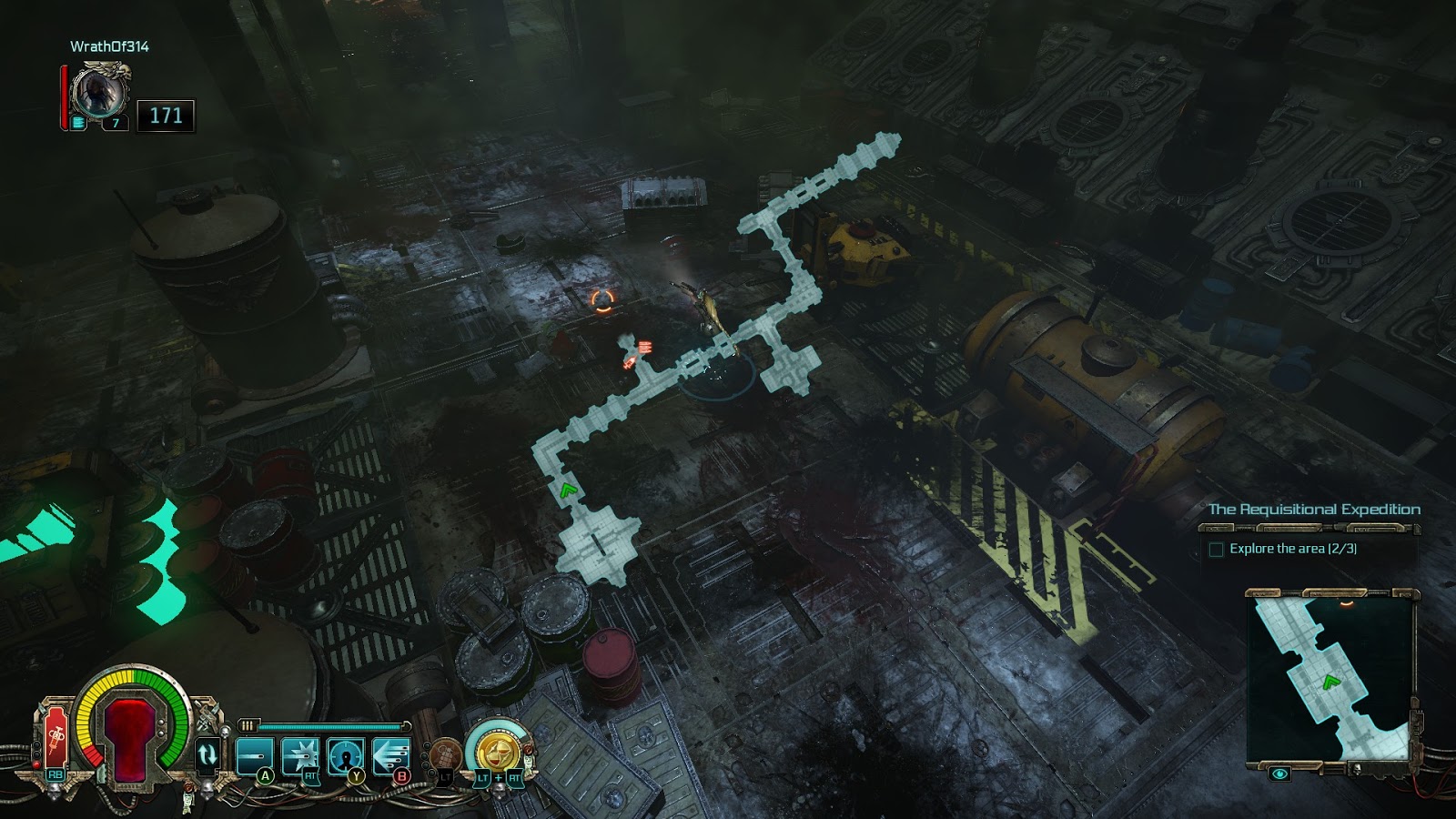 Even if you pick something amazing up on a mission you’ll have to wait until you get back to equip it. With this style of RPG being all about the loot, the loot has been mostly removed from the equation with slim random placements of chests and most of your gear coming from the completion of a stage. It changes everything about the style and only time will tell if it really works as what is present now is already better than what was previously available in the late Early Access stages.

After a certain amount of missions and having rescued or recruited several members for your crew, new options open up in the form of crafting / salvaging and changing up what your medical implants can do for you. Crafting can be done with the materials that come from salvaging unwanted or older gear that no longer has a use. This can be one way to supplement yourself if nothing new has fallen in a little bit. Your options will be limited at first but once you start finding blueprints the world is your oyster. By comparison, you implant which leads to your medical options can be modified in accordance to the capabilities of the item itself. More health? Better buffs? Better everything but less uses? Things to think about especially if you know what you’re about to come up against.

Once you’ve completed your preparations, you can select where you want to go from either the terminal of your ship’s bridge, or by pulling up your notifications to immediately jump into your next available campaign mission. Because of the mission based structure, campaigns aren’t these giant overarching be all end alls. While some do push forward the main story, others are side-plots that work great for building up your characters. In either case, each of these will have various missions that are required to be completed in randomly generated levels that follow along a plotline. 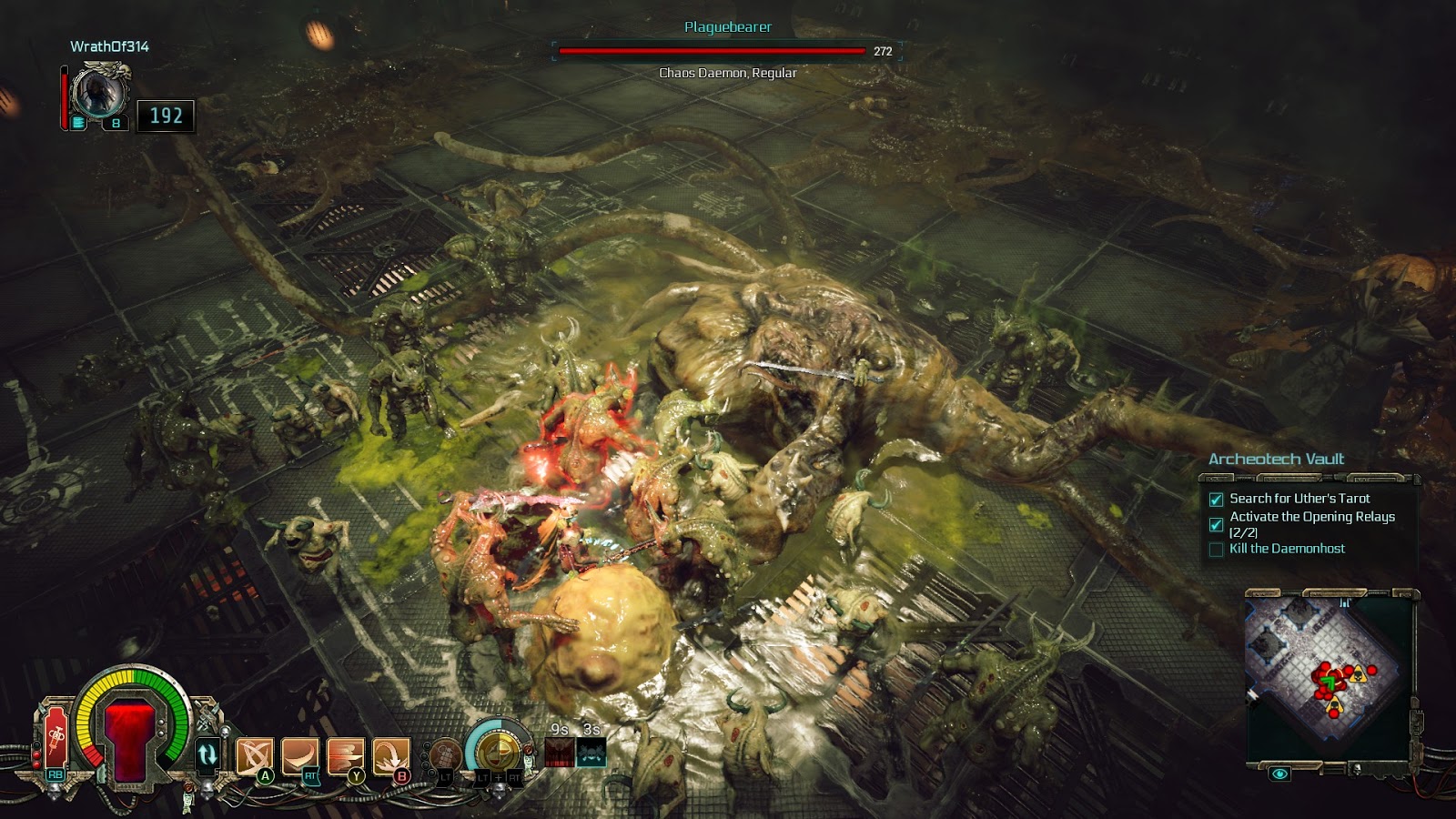 In one case after the story got going I had to rescue a Tech Priest from the clutches of Pirates. How I went about it though was entirely up to me. Each stage of the campaign has choices that can be made in regards to sabotage and subterfuge. Leading the pirates away on a fake distress call I went in and eliminated those that stayed behind. As things never go according to plan, the rest came back leading to the next mission where it became a no holds barred fight to their death as I clearly won. I am still here to write this after all.

It’s these little elements that lead to some interesting mission objectives like snatching up an officer to interrogate. You have to make sure to not kill him as you tag him for teleport and then be able to pull off the teleport without dying. With the possible swarms of enemies you’ll need to be either brave or be smart by taking cover behind something close.

One of the best features to come out of Martyr, though no good if you get swarmed, is the cover system. This lets characters and enemies alike hide behind destructible objects like half walls or pillars in order to have it soak up the damage instead of you. The other great thing about cover is that when your hidden your health will regenerate faster than it would otherwise allowing you to keep a health injection for when you really need it. The downside to cover is that your enemies can use it too making you have to be a bit creative in your approach. I like how it was not simply limited to you but that anyone could use it which makes the world that much more believable. 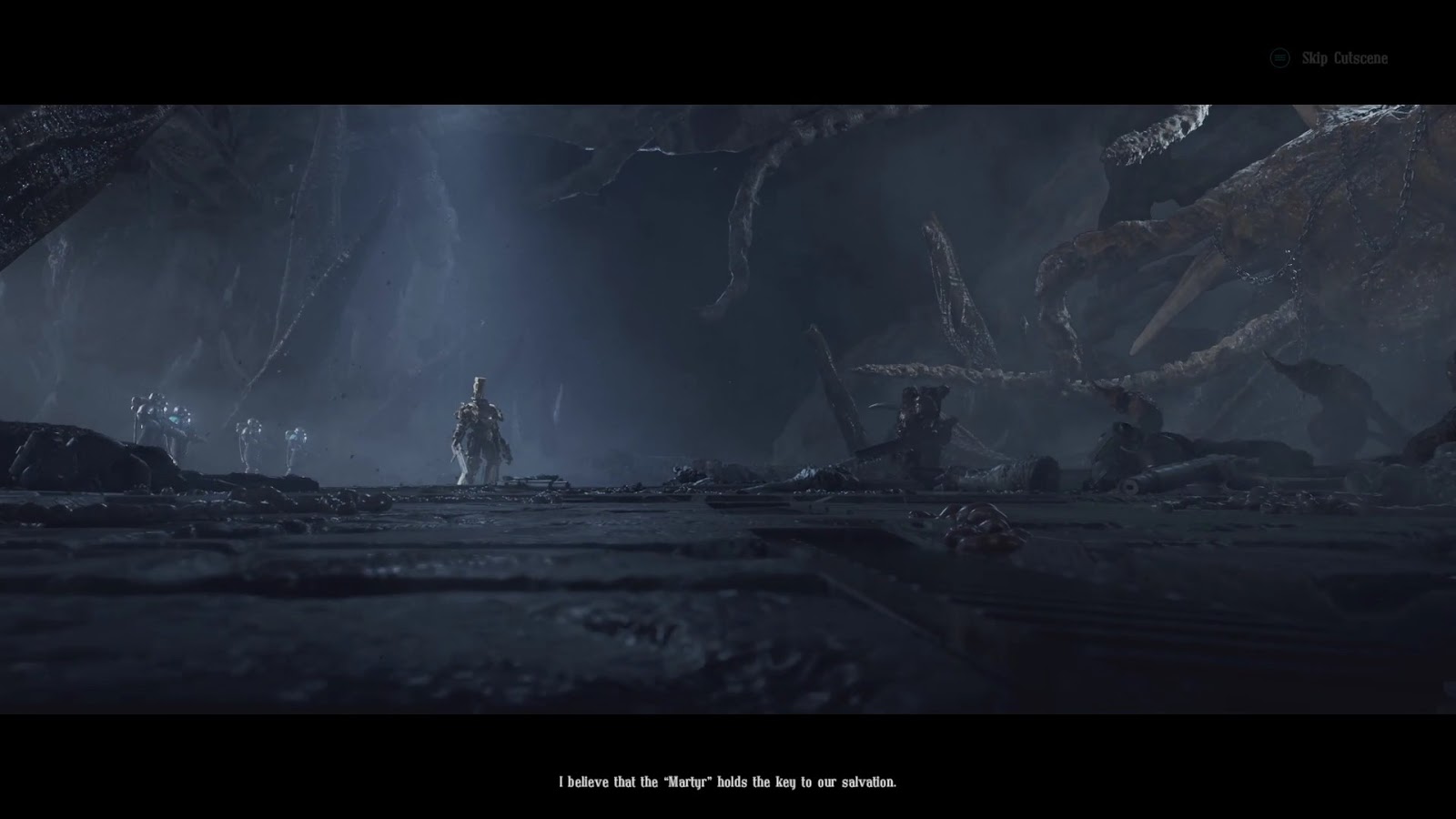 The keyboard and mouse will sound to most people the logical choice when it comes to the PC even if there’s full controller support because of the availability on the PS4 and the XB1. The level of customization is much larger though the level of effort to move around your surroundings felt heavier than that of a controller. The reason is that you can either move forward with your keys or your left click but then to look around that’s another set of keys or your middle mouse button. Adding in that the Assassin is the only class to dodge and can only dodge directionally according to the button press, that’s a total of ten keys just for your movement and your camera if you flatout ignore the mouse. TEN! Add in the various skills and what not, your looking at twenty some odd keys if you want the full motion of controls.

Using a controller however is much easier as you move with the left stick and view with the right. That’s it. If you want to dodge, then you click on the left stick which was a bit odd instead of mapping it to a button but oh well. The reason of the motion of controls felt natural with the standard attacks and those that required cooldowns. Inventory management takes a bit longer to go through compared to clicking and dragging but that’s a price to pay for the controller. Where the controller suffers compared to the mouse and keyboard however is that often you are left wondering what the targeting system is up to.

Because the default attack button is also the interact, often my characters would meander off to go open a supply or medic chest instead of attacking the enemy. Other times instead of activating a switch to move on with a stage, they would go attack whatever was closest or, like the other case, go open a chest because why the hell not. Targeting with ranged weapons while in cover was also challenging because you can’t really aim it but hope that the system points your weapon properly which was often not the case compared to with a mouse which allowed you to properly zone in on your enemy even if they were very far out of range. Hurray for super long distance warfare! 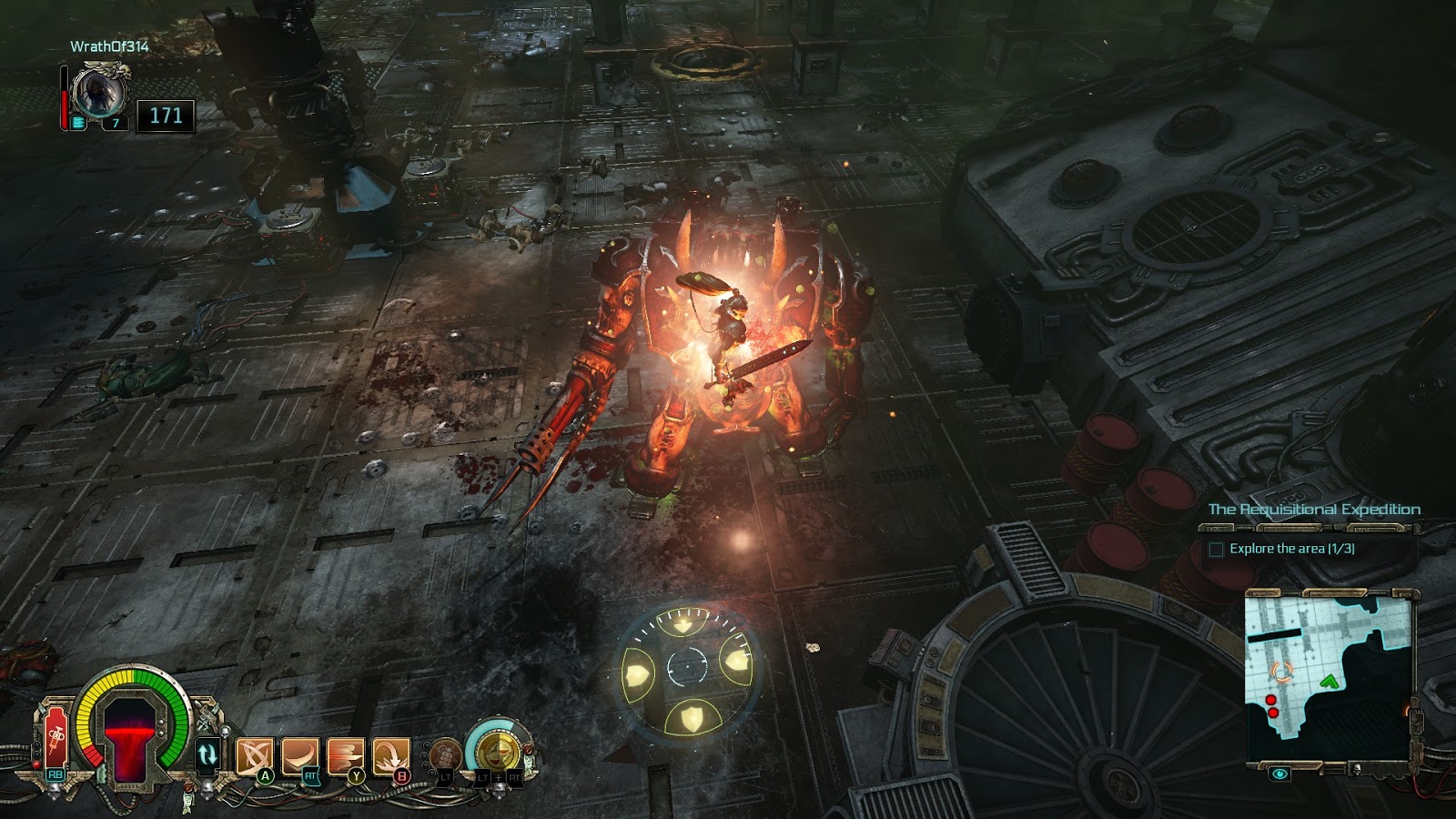 There’s one last feature that I’ll be honest that while I’ve looked into it, I haven’t dived into it. This is what NeocoreGames have called the Cabal which is basically a Guild system that allows for any member to gain passive bonuses just from being a member. Looking through the available lists there are plenty out there, some big, some brand new and surprisingly, a decent amount French. If I wanted a French speaking guild from the Province that I live within? A lot of them seem open to new members and are freely open to join. I found that pretty cool.

Warhammer 40k – Martyr: Inquisitor has a lot of great ideas and is easy to sink hours upon hours into but there are still some areas that felt rough. The title itself however hasn’t just been left to its own devices and I want to give the developers huge props for the work that they are putting into it, the events that they have ongoing and the general work that keep putting into it. Like The Incredible Adventures of Van Helsing, NecoreGames pay attention and work towards making the best product they can with feedback from the fans. Should you check it out? Yes. There’s plenty to do and a lot of “Hack & Slash” Action RPG adventuring to be had.