Last year Richard got to experience the craziness that is Touhou in its dungeon crawling format while I doubled up and tried to focus on the platforming. Moving up to today, it’s my turn to dive into the Roguelike dungeon Crawling that Touhou Genso Wanderer hides behind its many portals and locations.

Prior to Reloaded I’ve played the introduction to Genso Wanderer when I borrowed it from a local library for my brother. Because of this I had some idea of what I could be expecting in the lower, or higher, floors of the various dungeons that await Reimu and her party. Solo or with a partner, you’ll be guiding her on various quests serious or otherwise as she explores the many mysteries that await. I say “serious” but let’s be honest that evil was released by Rinnosuke not letting Reimu play with his golden ball which accidentally releases the seal when Reimu went for it anyways. Gearing up for yet another whoops adventure, there’s no shortage of weapons, armor and experience to be gained. Only a shortage of food which can, and will, kill you.

Touhou Genso Wanderer: Reloaded is a both a roguelike in name an in nature. Dungeons are large masses that are both random and treacherous making every step you take your possible last. Using the classic formula, nothing moves until you do. Taking in a one to one step ratio, unless other factors are involved, everything and everyone will move one step or attack once you do. This can let you carefully plan out your actions or see your demise coming from a mile away unless you get really lucky and survive the oncoming attacks, otherwise it’s back to town! 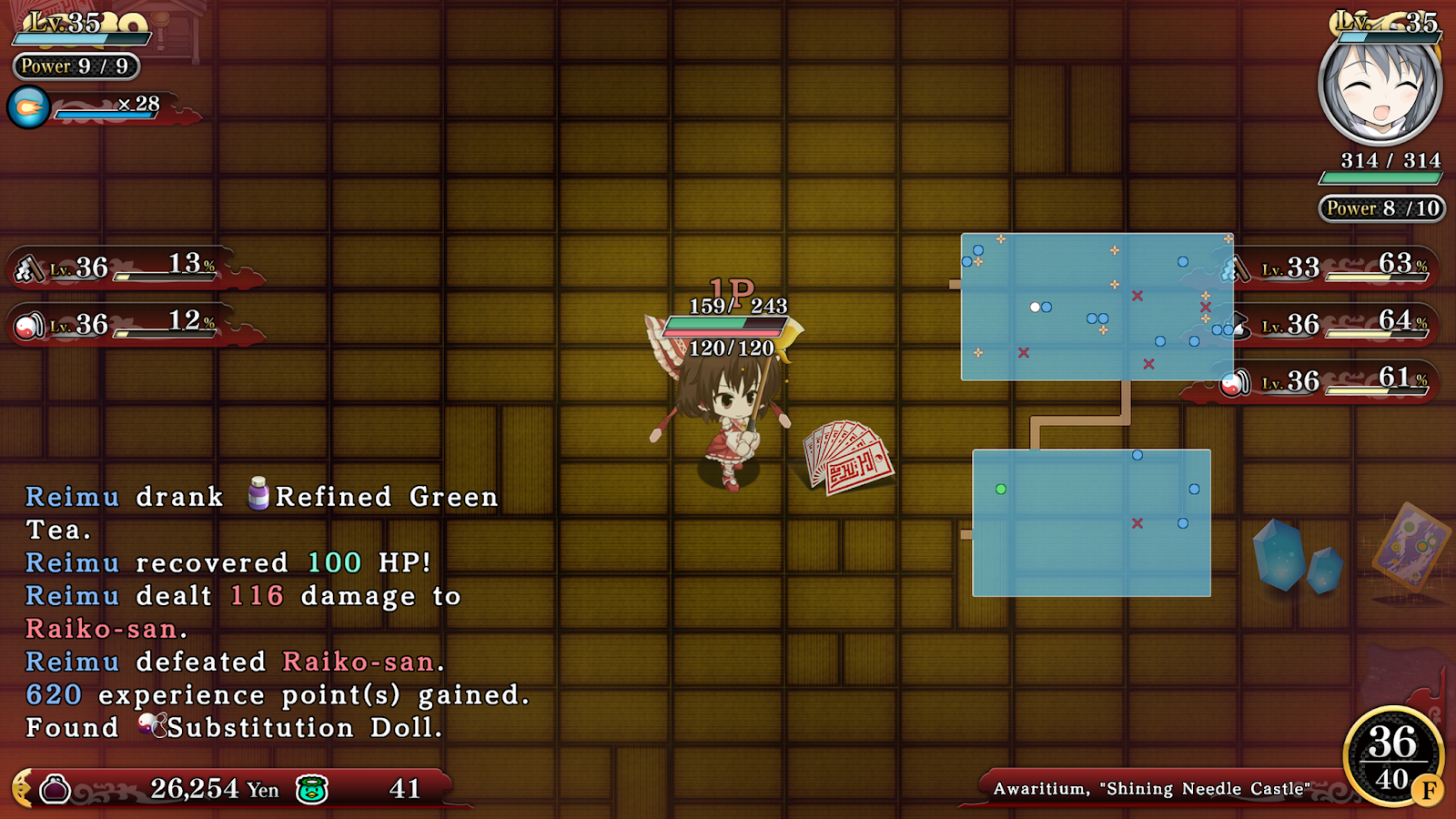 Hit points fall to zero? Back to town. Hunger his zero, your health with drain with every step and thus when it hits zero? Back to town. There are some elements that are a little more friendly as if you fall in a dungeon you don’t lose everything which I actually found surprising. You actually get to keep the stuff you picked up off of the floor in which most would laugh gleefully at your misfortune or stupidity as you bravely declared that you could handle a situation instead of retreating.

Normally in these cases if you fell you lost everything or a good portion of your stock. Instead, being able to keep them, it allows you to prep that much better for your next outing without having to worry about losing your favorite spatula. What? It was an awesome two-handed weapon before it became a chisel… and now a giant deathscythe after merging it with Cloud’s sword.

The point that I want to make is that without that worry of loss, there’s a stress that is never enforced making you never really question your decision as to whether or not you should go back. While it increases the enjoyability, it also decreases the difficulty as you don’t need to worry about dying, you just need to worry about getting back to where you died with no strings attached. One way or the other, you’ll always start back at level one so maybe that’s the offset as often times there’s a way to boost yourself to be a “stronger” level 1 the next time. 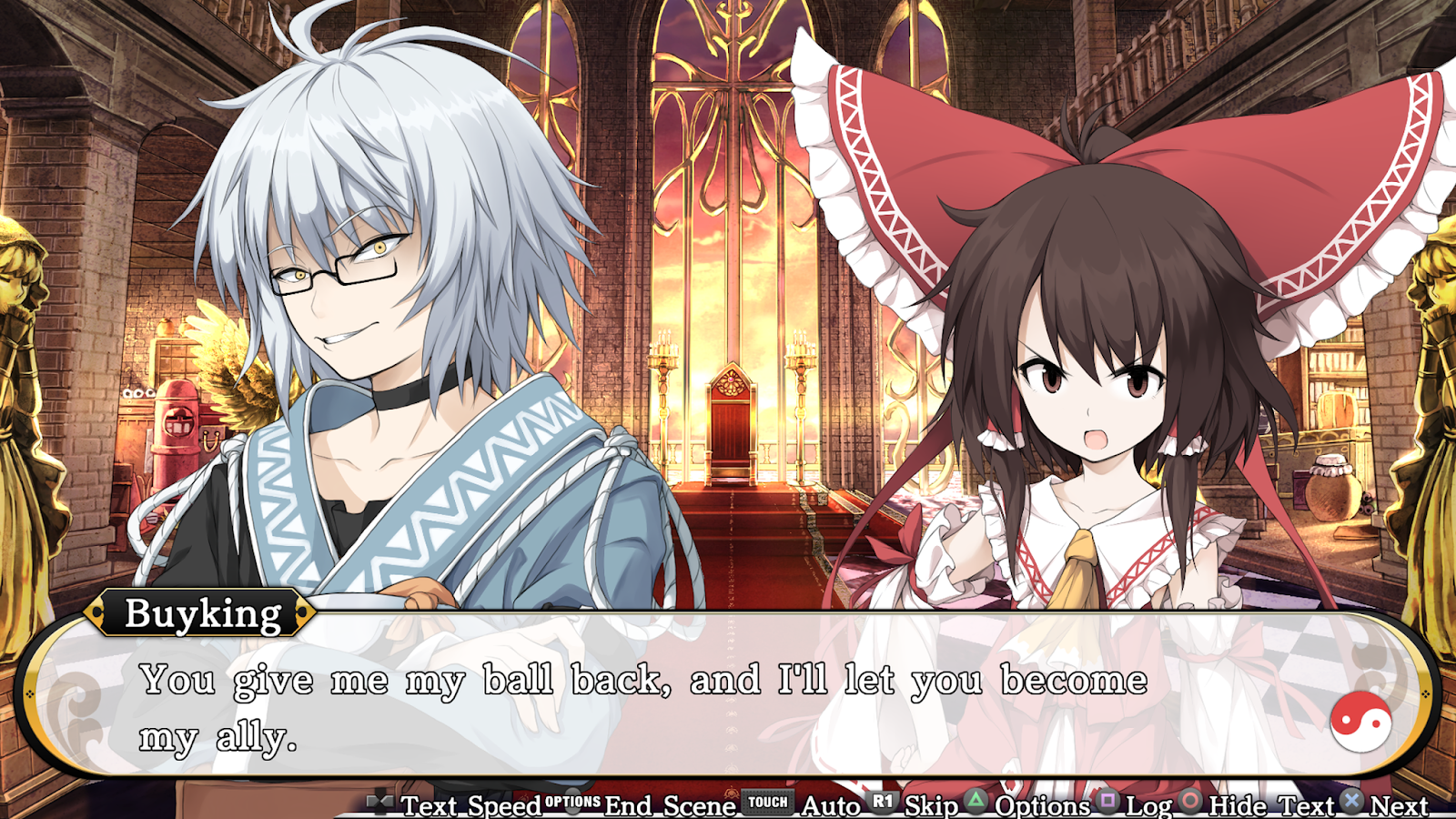 Setting aside dying for a moment, the mechanics are extremely enjoyable. Moving around the dungeons is a pleasure and anything but a chore. The standard has you moving left, right, up and down. The advanced has you being able to move diagonally though often it’s a bloody chore and not worth the effort because of some half-baked control schemes. Genso Wanderer is both responsive with your thumbstick or d-pad as well as having the option to hold down a shoulder button that will only allow you to move diagonally just to make sure you don’t mess something up. Adding in one more quality of life improvement is that by holding R1 you can zoom through the passageways between rooms regardless of the twists and turns. Holding “O” is already a godsend with you zooming but it’s only built for straight lines. Having the pathfinder option just makes it that much better.

Now while in these dungeons there are going to be plenty of floors with rooms for you to explore as you look for the gateway to the next floor. They are generally not that hard to find as your biggest worry is going to be a combination of traps, enemies to slay and level up off of and going hungry. As Richard would state, Pro Tip, and in my words, *spoilers* if you make early enough on a basic enough potion it has a property that can be merged into an item which reduces hunger. This means that instead of going through a truckload of Red Bean Cakes, you may only need one for several to a dozen floors worth of exploration allowing for you to go that much further. *end spoilers* This leads into one of the biggest features, fusing the hell out of anything and everything!

By use of what is called the Nito box, you can fuse just about anything with anything else through the use of accumulated points. Adding weapons together can increase the base strength but fusing them with other items can give that weapon new abilities such as life on hit or increased damage to flying enemies for example. Each fusion costs about one-hundred points so it’s not cheap per say but with the amount of junk that you’ll be picking up off of the ground, you can grind it all for points which also liberates some space in your inventory! 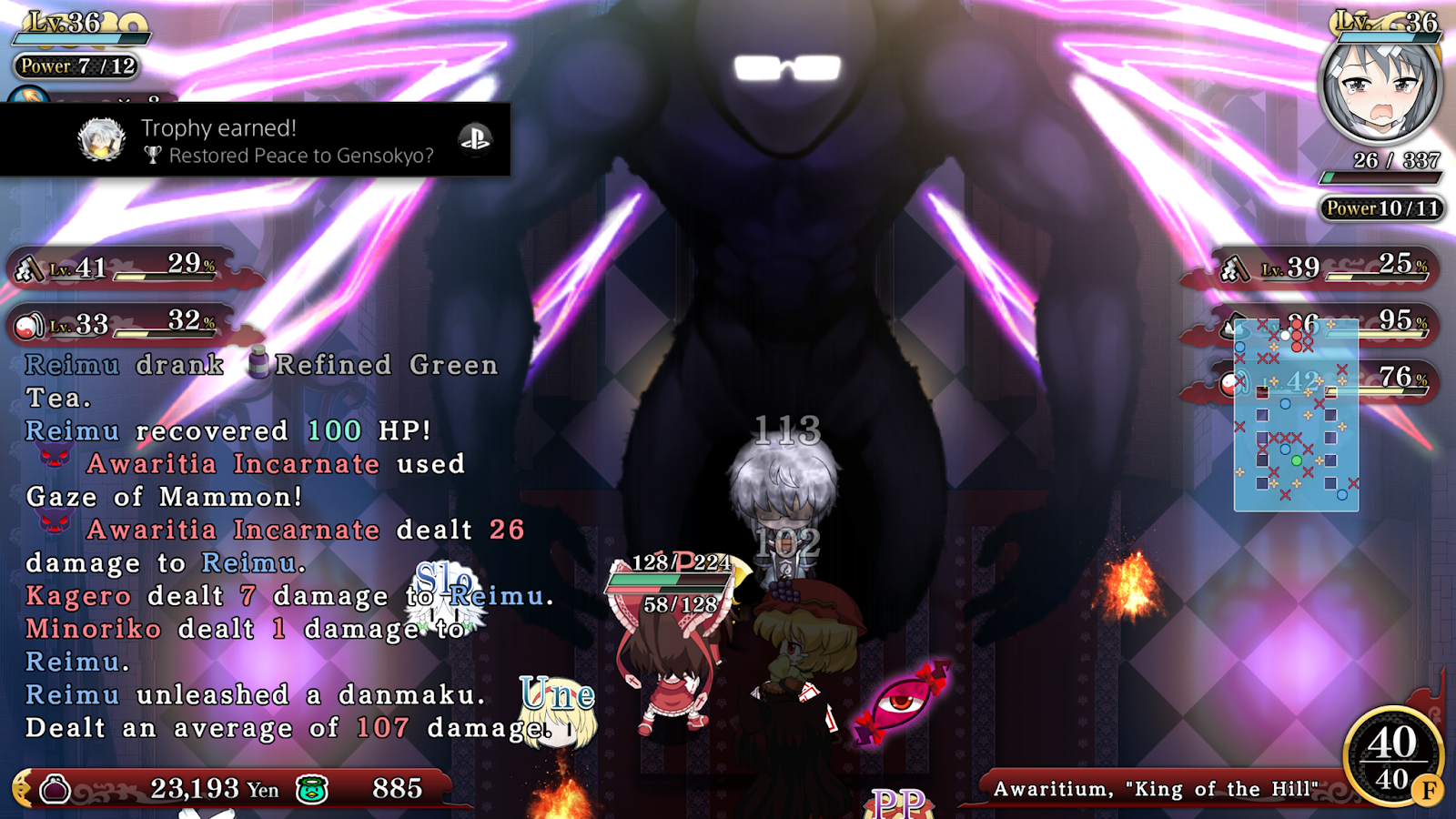 So while potions, scrolls and food (in which why would you want to get rid of!?) give about a point each, equipment yield many more with you looking at seven or more. So with the cost of fusion being one-hundred, it takes a fair amount of points to do anything but it’s worth it and besides? The great part of fusing all of these items together isn’t that you can get much better gear, it’s that you can do it anytime and anywhere with no restrictions. You don’t need your town, you don’t need the Yokai’s town, you just need to open up your inventory and go for it!

I quite enjoyed Touhou Genso Wanderer: Reloaded. It has many of those classic elements that make a Roguelike what they are alongside other factors that made it enjoyable as you aren’t always making hard choices as to whether or not to pick something up because you are out of space. Being able to grind it down for points and then use those points on something else makes for a fantastic feature as you aren’t stuck waiting for a blacksmith but you can do it yourself keeping the dungeon crawling rolling for a lot longer at a time. 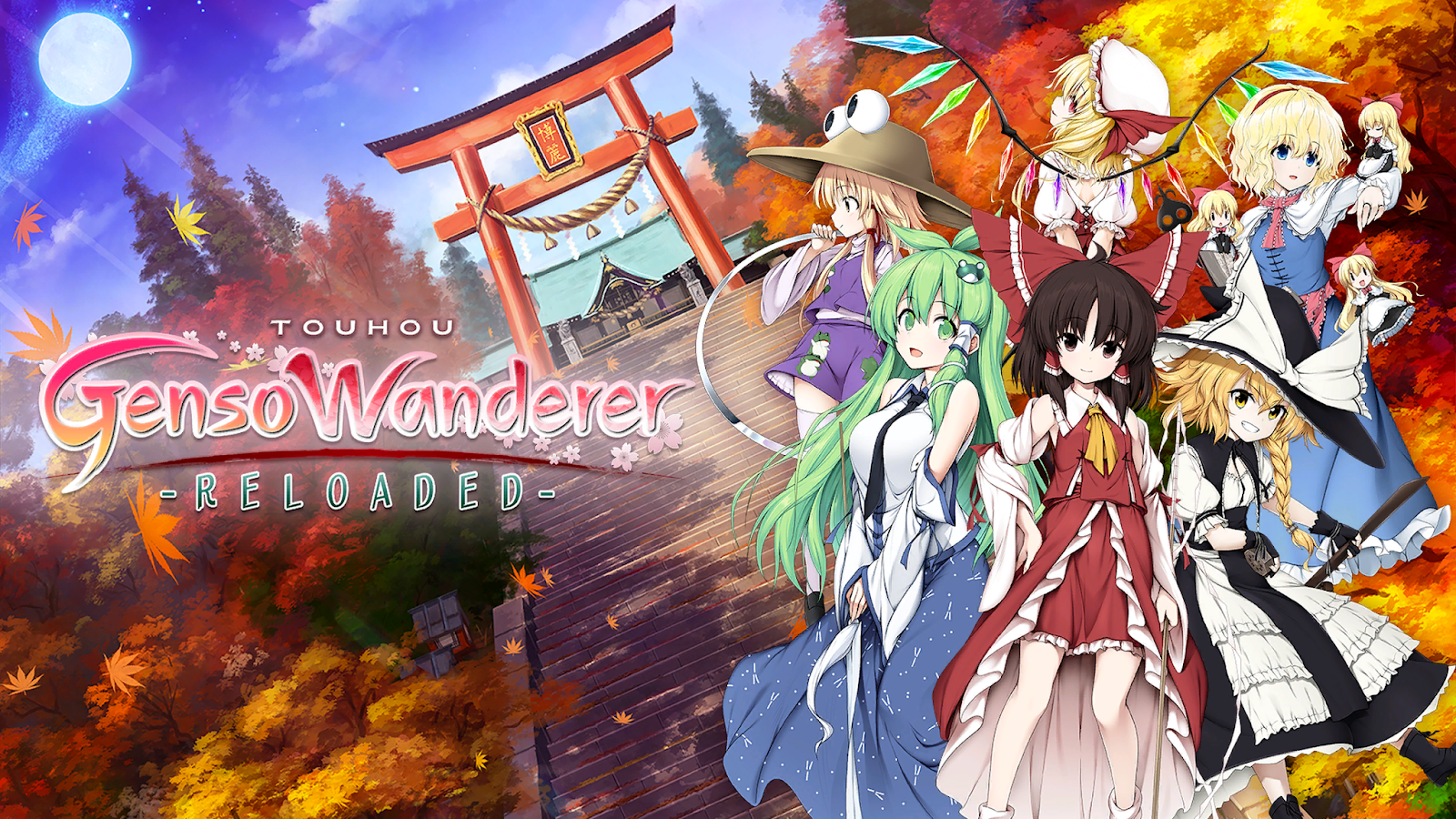