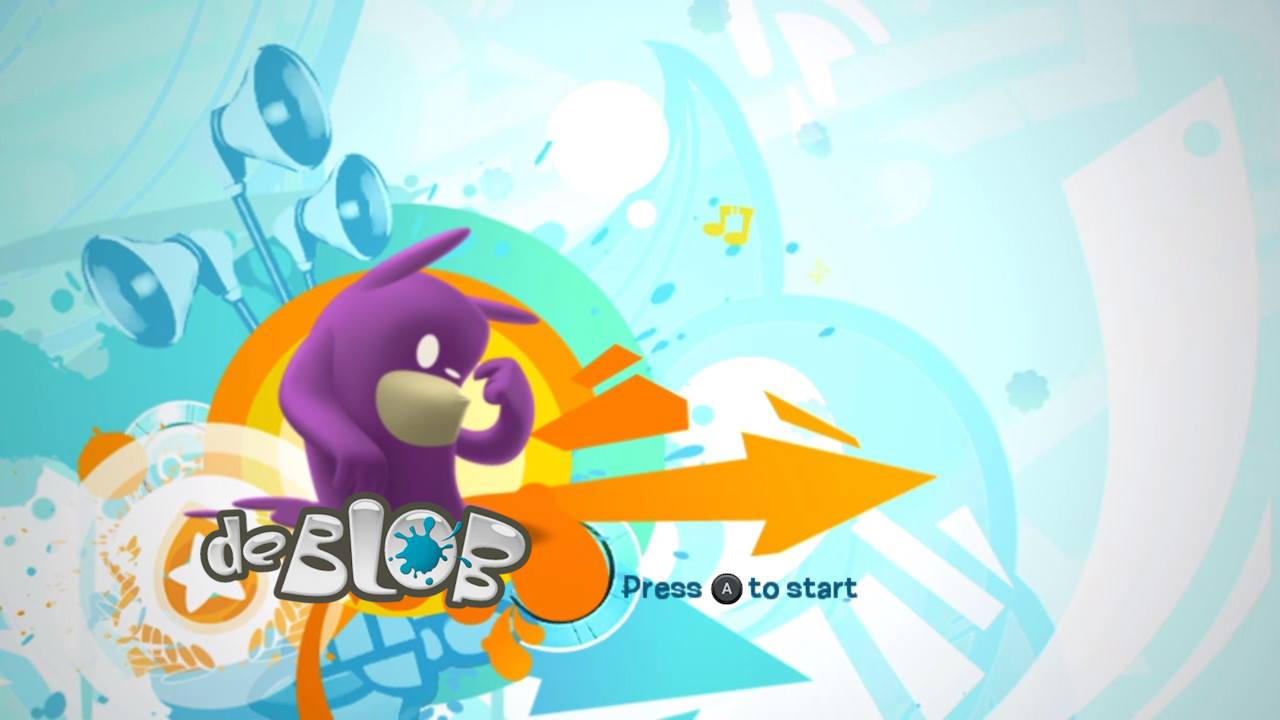 I think it’s worth pointing out right from the start that I am partially color-blind. No, not like a puppy. I can see color, but I have a hard time differentiating between red and green when they are mixed (like plaid). So although there doesn’t seem to be a color-blind setting, I didn’t experience any difficulty with discerning color – hooray!

I really appreciated being able to pick out which “mood” I wanted to play with – this decides your background music. I started with blissful, which definitely kept the frustration level down as I struggled with the first level.

Be prepared the play through the entire level without quitting as this game only saves at the end of each level. I got about 25 minutes in, and thought it might save after I opened a gate. Nope. I had to start over. 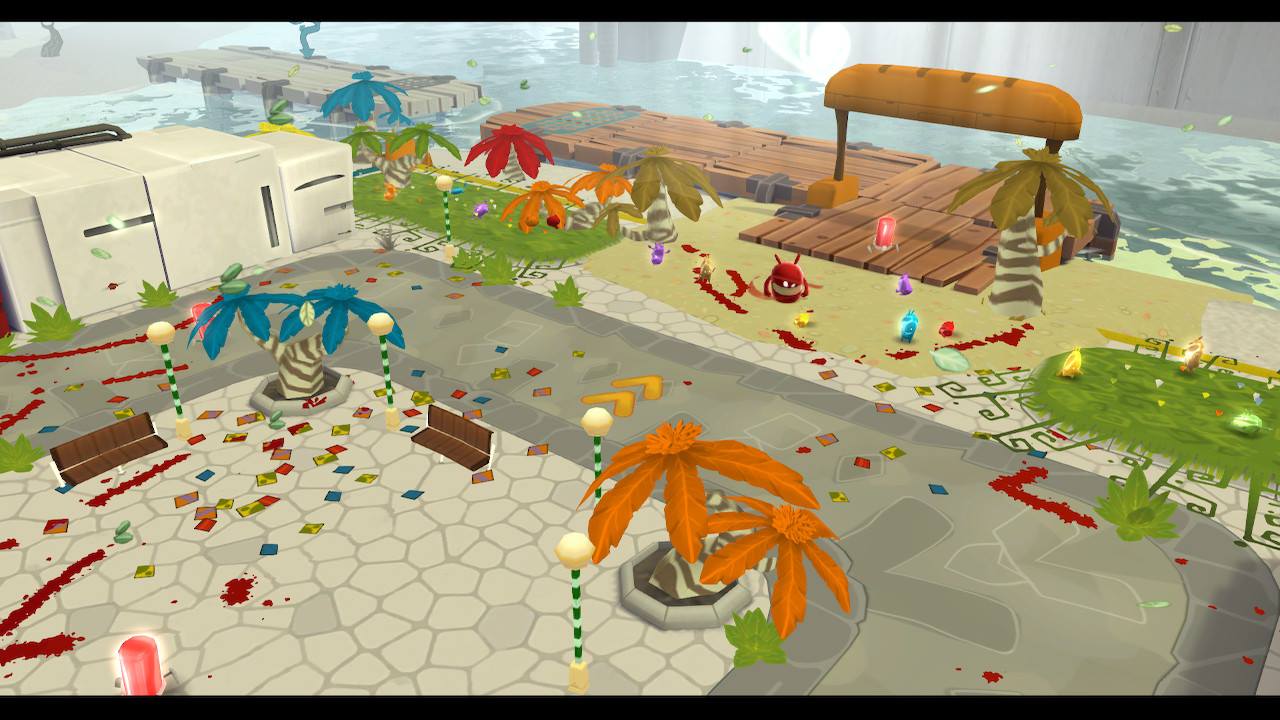 Colorless minions from the INKT Corporation have invaded the town of Chroma City and de-colorized everything and everyone. In order to restore the world, you have to work with the underground rebel color group to gain color energy and overpower the INKT Corporation. You play as a round blob that can absorb color and disperse it all over buildings, trees, park benches, lights and other minions.

Each level as a timer that counts down until the INKT Corporation tracks you down, AKA game over, in which during this time you need to accumulate enough color energy to continuously move forward. You can gain more time by running over the little alarm clocks that are either randomly placed throughout the city or that are generated from coloring little people, Graydians, freed from colored buildings. You can get color energy from passing special timed challenges given to you by various members of the underground color rebellion. The challenges that I have seen so far are pretty straightforward: color this many buildings in these colors, race to the following checkpoints or squish this many INKT Corporation minions.

There are other power-ups and extra lives along the way – keep an eye out for them! 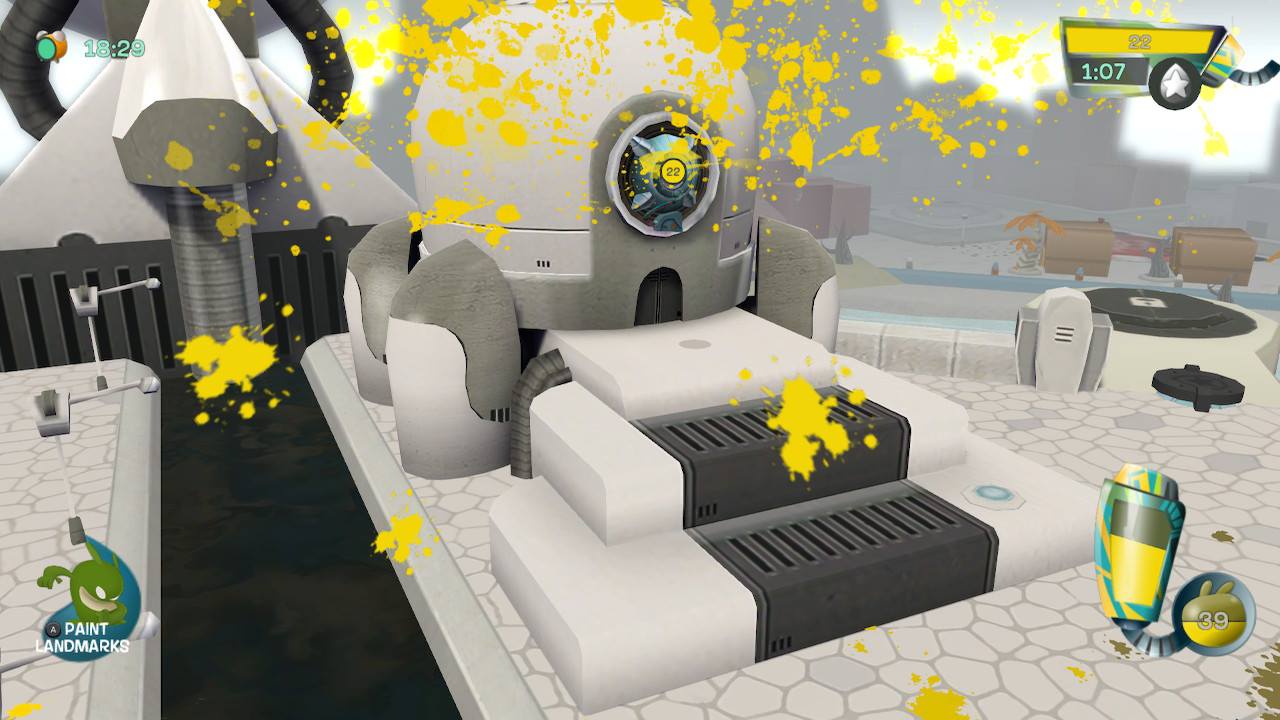 At first glance, the control scheme seems to be simple (ZL to target, ZR to brake, A to jump, L to move the camera, etc) but when the camera doesn’t let you look up and occasionally moves on its own (which can cause you to jump in the completely wrong direction) it makes for a messy situation. I found it very difficult to jump up to certain high platforms because either the blob would stick to the side or launch himself back down to the ground in the opposite direction that I was telling him to go.

Targeting and smashing into paint bots gets you more paint. You can mix and match to get different colors. Mix all three to get a lovely shade of poop brown and try not to feel like Mr. Hankey while you are bouncing around the city trailing brown paint behind you. Don’t want the color you have? No problem! Run through some water and you’ll be a blank blob canvas again. That’s also the only way to get the black oil stuff off of you – so pay attention to where your water source is. 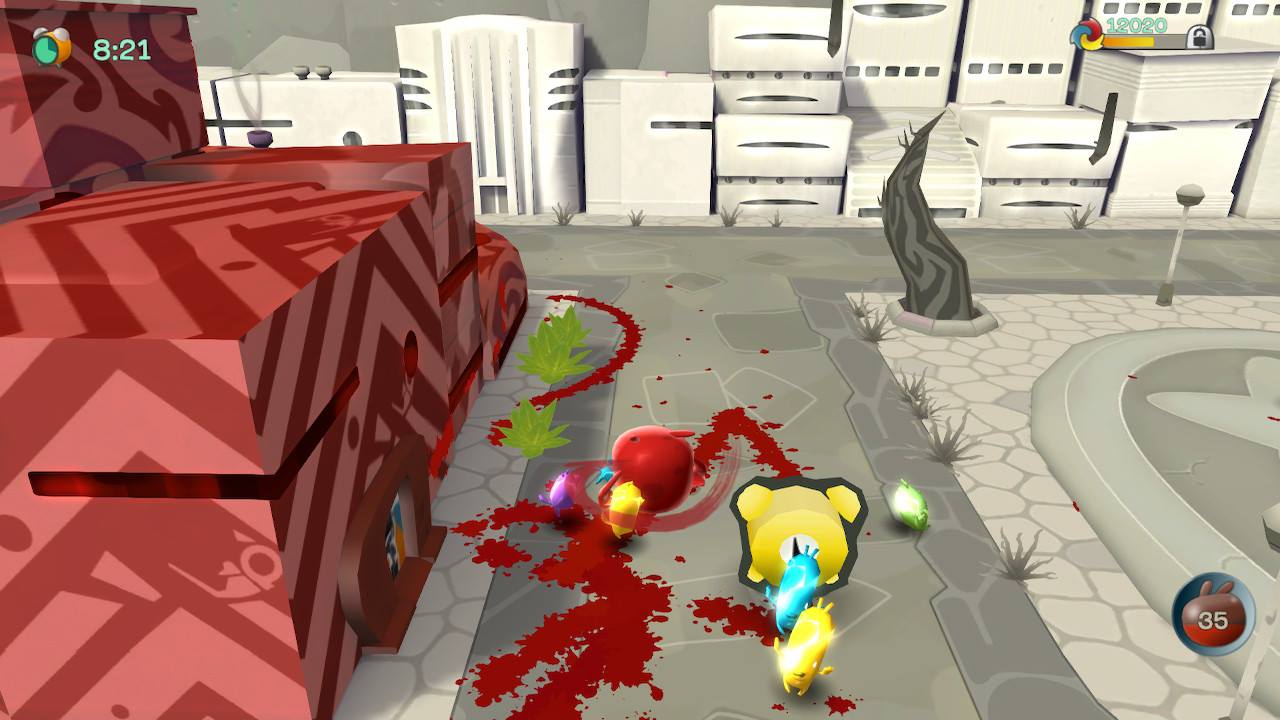 Once you are through the first gate you are given a compass that helps you locate the closest color bots and challenges.

After the first level you will start encountering enemies. Use the same targeting mechanics on enemies. Unlike paint bots, where you can sometimes just roll really fast into them to get the paint, enemies will hurt you if you don’t belly-flop them.

There are three multiplayer “Blob Party” modes that you can play with up to 4 players: 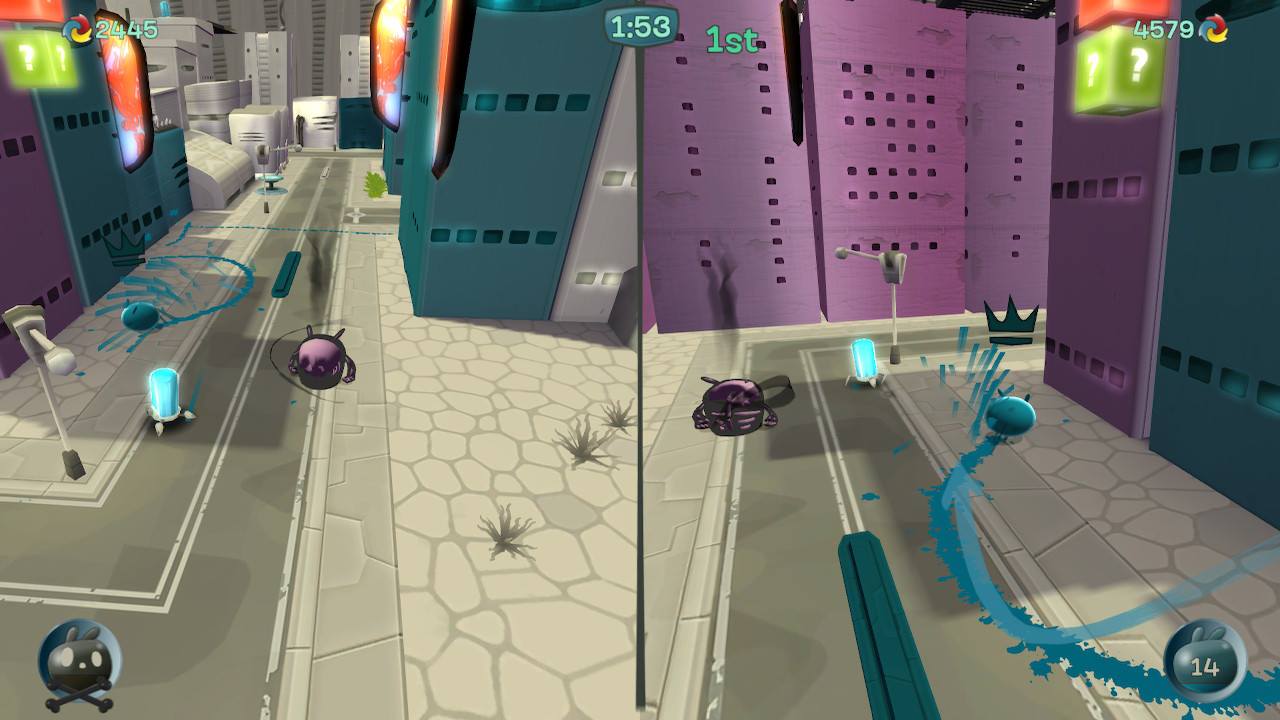 Although the levels and tasks can be quite repetitive, I didn’t find that it was detrimental to my level of entertainment. I tried to be super colorful with my painting, which led to higher scores when finishing a block.

If it wasn’t for the lack of autosave at each checkpoint and the wonky jump mechanics, I likely would have score this game a lot higher. The multiplayer is definitely its redeeming element.

This game is definitely kid-friendly. My thirteen year old step-daughter and I had a blast in the co-op levels.

Kudos to the developers making the INKT Corporation employees work in banking and accounting jobs. I can definitely relate to finance-related work sucking all the color out of life. 🙂