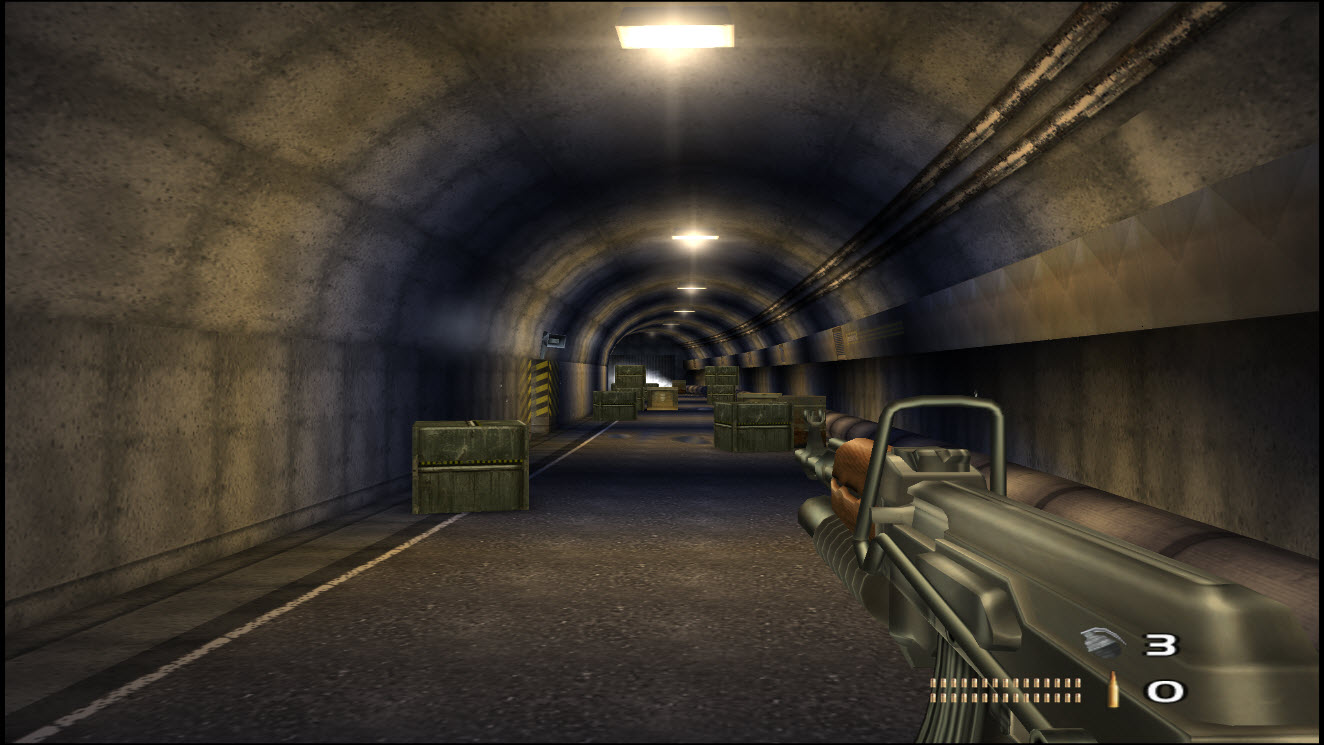 Timesplitters 2 is a first person shooter for the PS2, part of a popular series. The story is about a soldier facing aliens who try to alter human history by traveling to different periods in the past and giving time crystals to villains. Although time travel and alien invasions are classic themes, the story does not make a lot of sense. What do the aliens hope to accomplish by helping the villains? And why does the hero become another character whenever he travels to a new time zone?

Anyway, when you start a mission you must complete some objectives to reach the end, where the villain awaits you. Kill him, grab his crystal and a time portal opens; enter while the aliens swarm on you and return to your space station, ready for another mission. Objectives are different in each stage and the same goes for enemies, scenery and guns. Also, the experience changes when you alter the difficulty level: at normal level you gain access to more areas and have more things to do. This motivates you to replay the game at both normal and easy difficulty. 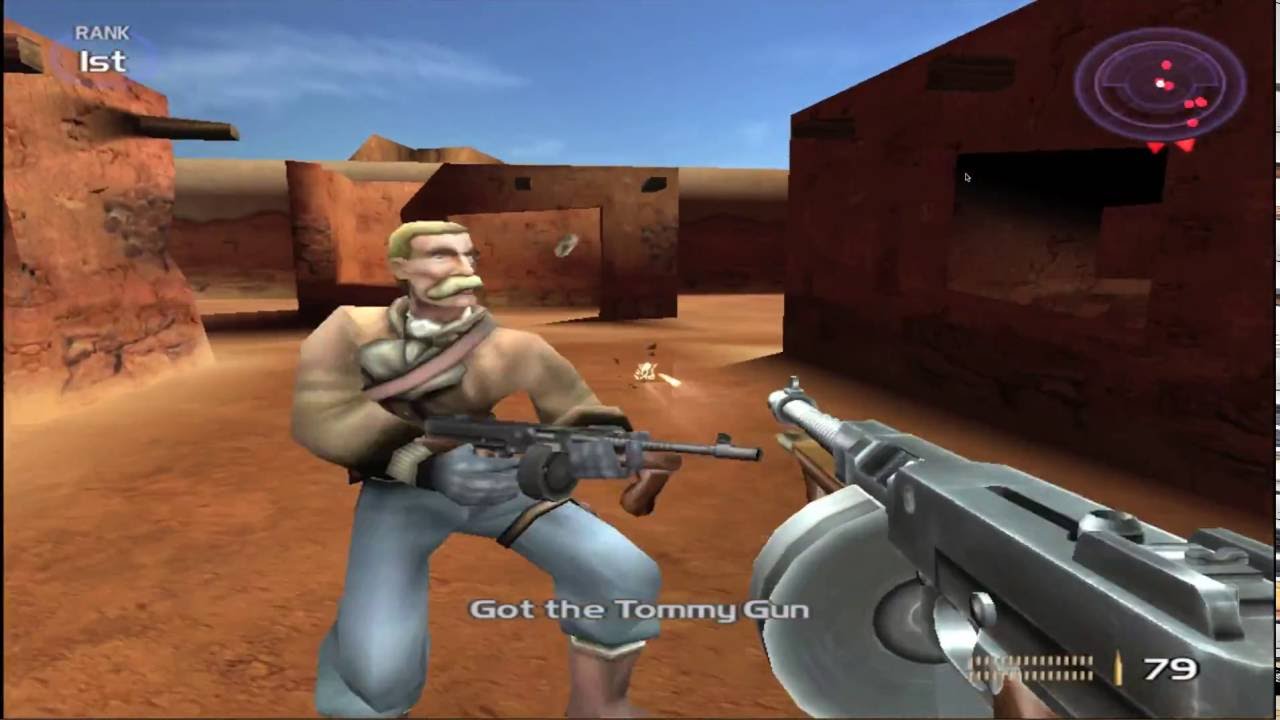 The stages are short and well designed. The first one is a soviet military base where horrible experiments are held. You also fight outlaws in the Wild West, face a sinister cult that prepares to sacrifice scantily clad fair maidens (!) in the catacombs below the church of Notre Dame, explore the surface of an alien planet where a UFO has crashed, walk in the streets of future Tokyo with its neon lights or escape from the secret base of a lunatic who reminds of a James Bond villain.

Usually “run and gun” tactics are required but sometimes you need to do something else, for example in Tokyo you must follow a hacker without being noticed and in Paris you have to free the maidens before they become zombies. Besides the variety of objectives, I loved the fast action and effective guns. Whether you destroy a running car using a tommy gun, fight natives in a Mayan temple with a crossbow or blast aliens with laser rifles, all weapons are nicely designed and fun.

Besides the campaign there are other modes, which allow you to fight computer controlled enemies in various areas. You will find “deathmatch”, where you must achieve a predetermined number of kills before your opponents, “capture the bag”, where you steal the enemy’s bag and bring it to your base, etc. Conditions are variable, e.g. you may gain health whenever you exterminate a foe. You are given a multitude of options (location, type of enemies, guns available, winning conditions), so you can make the experience suitable to your tastes. I played these challenges for a while and they add replay value to the game. 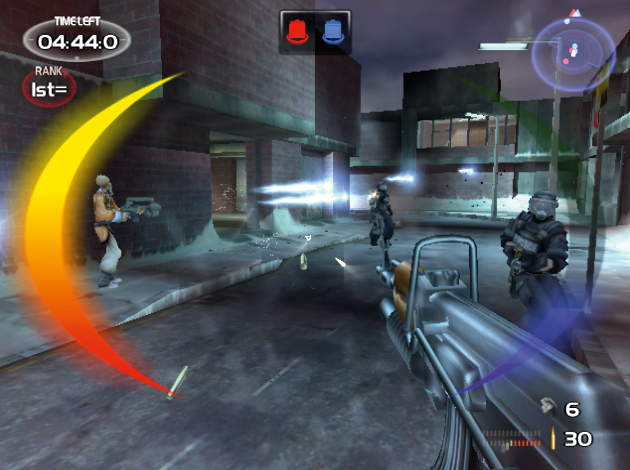 Technically, Timesplitters 2 is solid. The graphics are colorful and each stage is unique in terms of appearance and design. The music is also very good, especially in the Wild West and Soviet stage. The controls are precise, helping you shoot, run and dodge easily.

Despite its many positive aspects, Timesplitters 2 is not among my favorite shooters. The campaign had only ten missions and there was a serious lack of cohesion and atmosphere, as each mission seemed to have been taken from a different game and did not make feel I was progressing towards a goal. I would prefer to have more stages and fewer time periods. I was satisfied when I completed a mission, however when I finished the game I forgot about it quickly.

In general, Timesplitters 2 offers fast, entertaining shooting action and more than adequate production values. Since I only checked the single player modes, I cannot say anything about its multiplayer aspects. If you search for shooters with a developed, original world or a dramatic story you should probably check Rogue Trooper or Cold Winter, respectively. I cannot deny it was fun while it lasted though. After all, what other game gives you the chance to shoot zombies aided by Quasimodo? 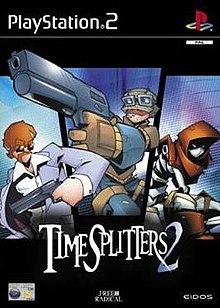 Facebook Twitter Pinterest E-mail
Previous article The Council: Episode 3 - Ripples - PC Review
Next article What is Shenmue? Part 3: Brush up on your Jiu Jitsu moves ahead of the launch next week - News