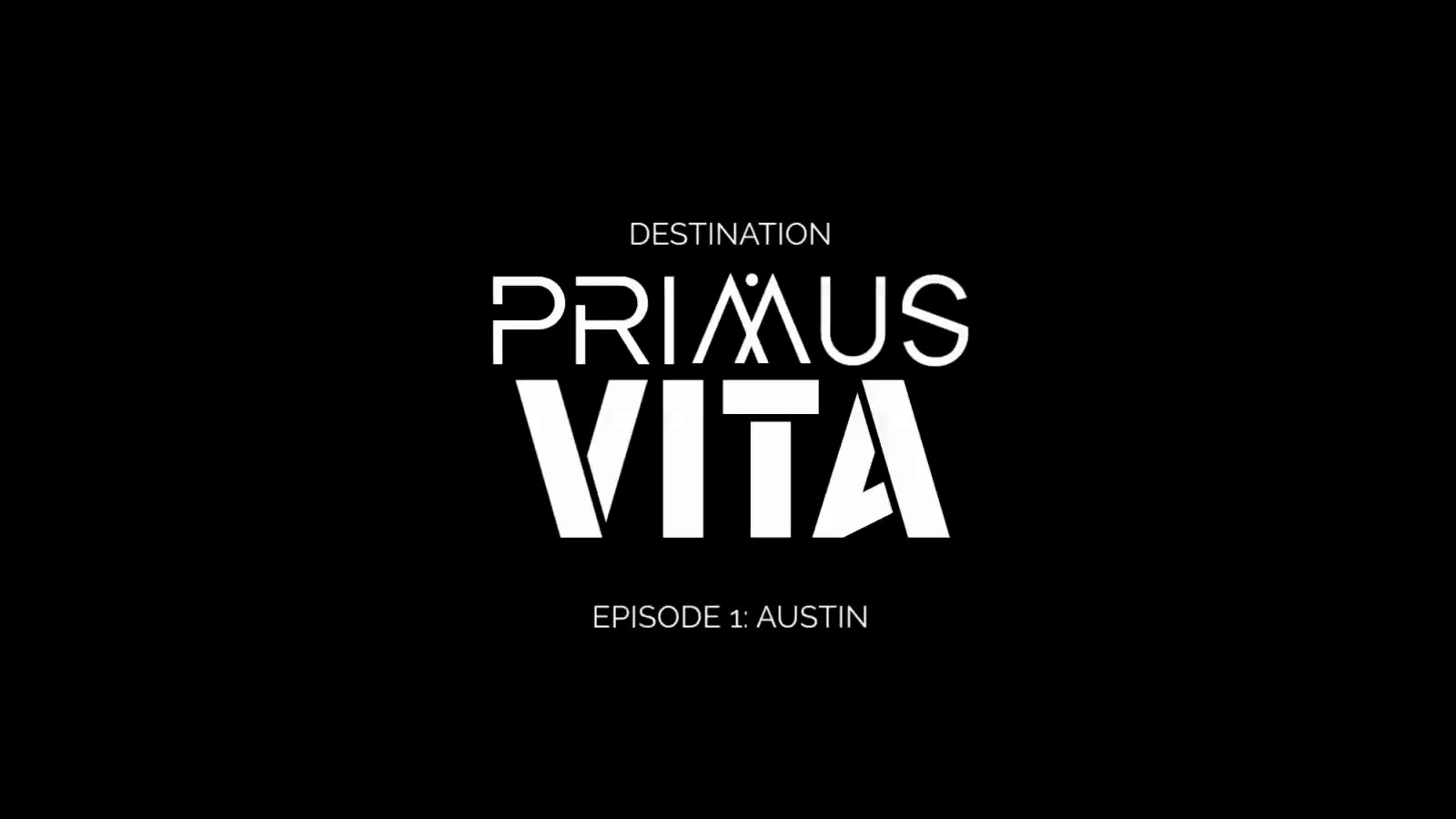 Epsilon Games have launched their first video game titled Destination Primus Vita. They are located in Montreal, Quebec and have received a ton of praise from the media (Such as the French Metro Paper).

The Vita universe created by Anne Gibeault began as a series of novels. After that, it continued its life in graphic novel format. Then finally, her vision lead Primus Vita to the video game space.

While Vita is the indie developers first video game, I couldn’t be more excited for Canadian content. And for the first time in a long time, a puzzle game pulled me along for an unexpected ride that I really loved. This isn’t a game that is chalked full of puzzles ‘just because’, it is a game whose story is told through the memories of a challenging past. 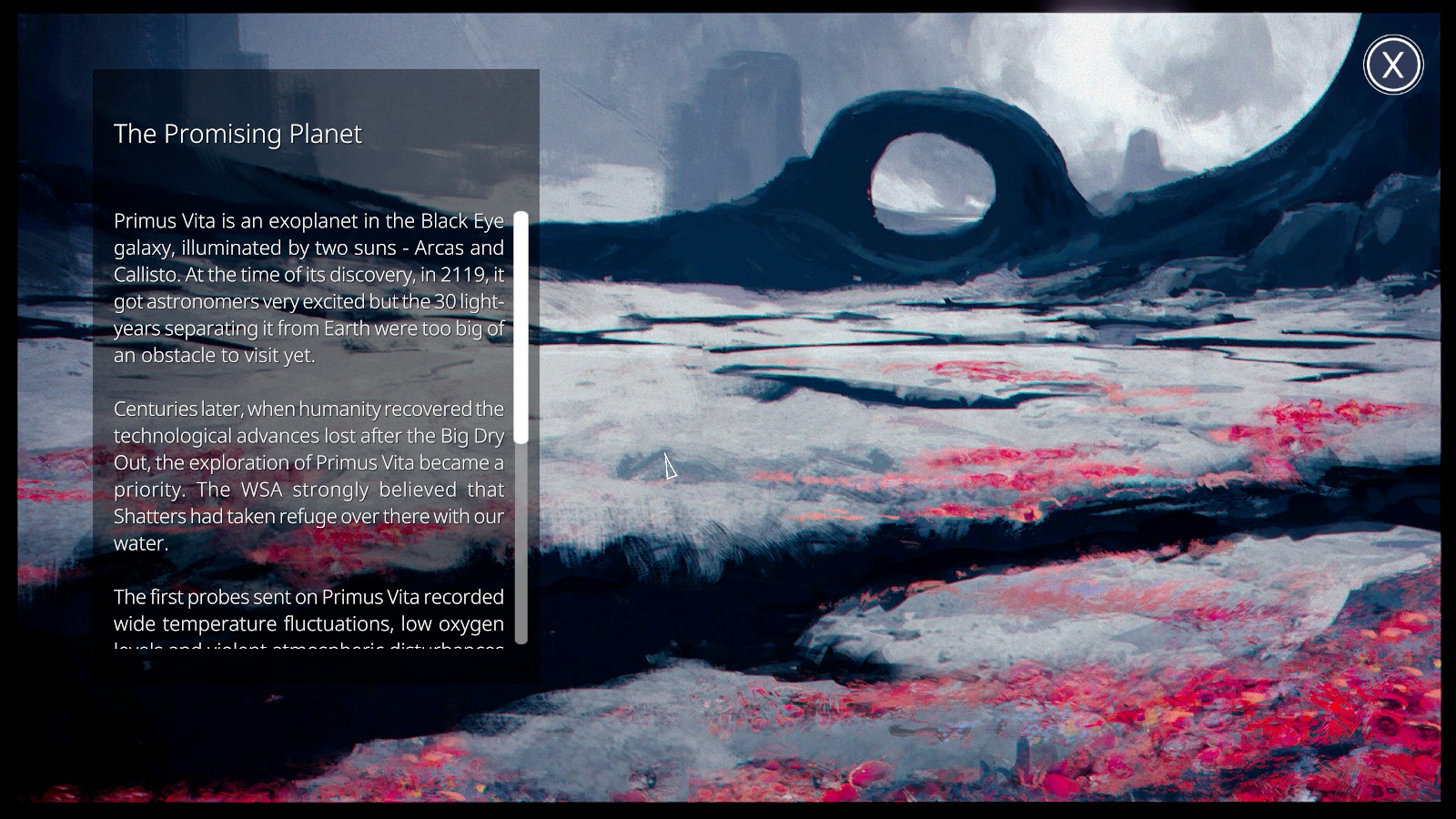 Players fill the role of Austin Moreno, a woman who wakes up from Cryosleep to get the information about Earth’s dire situation. Years before, an alien race known as the Shatters stole Earth’s supply of water. She must now work with Crew 121 to steal the water back. There is only one problem, the Shatters are hostile and a great deal stronger than the humans.

A computer AI, NIM, wakes Austin up to put her through a series of memories to prepare Crew 121 as they take the four year travel to Primus Vita. Austin must replenish her relationships with the others so that judgments aren’t based on past situations. After all, they have to work together to build some armor that is capable of handling the Shatters and the unfriendly atmosphere… 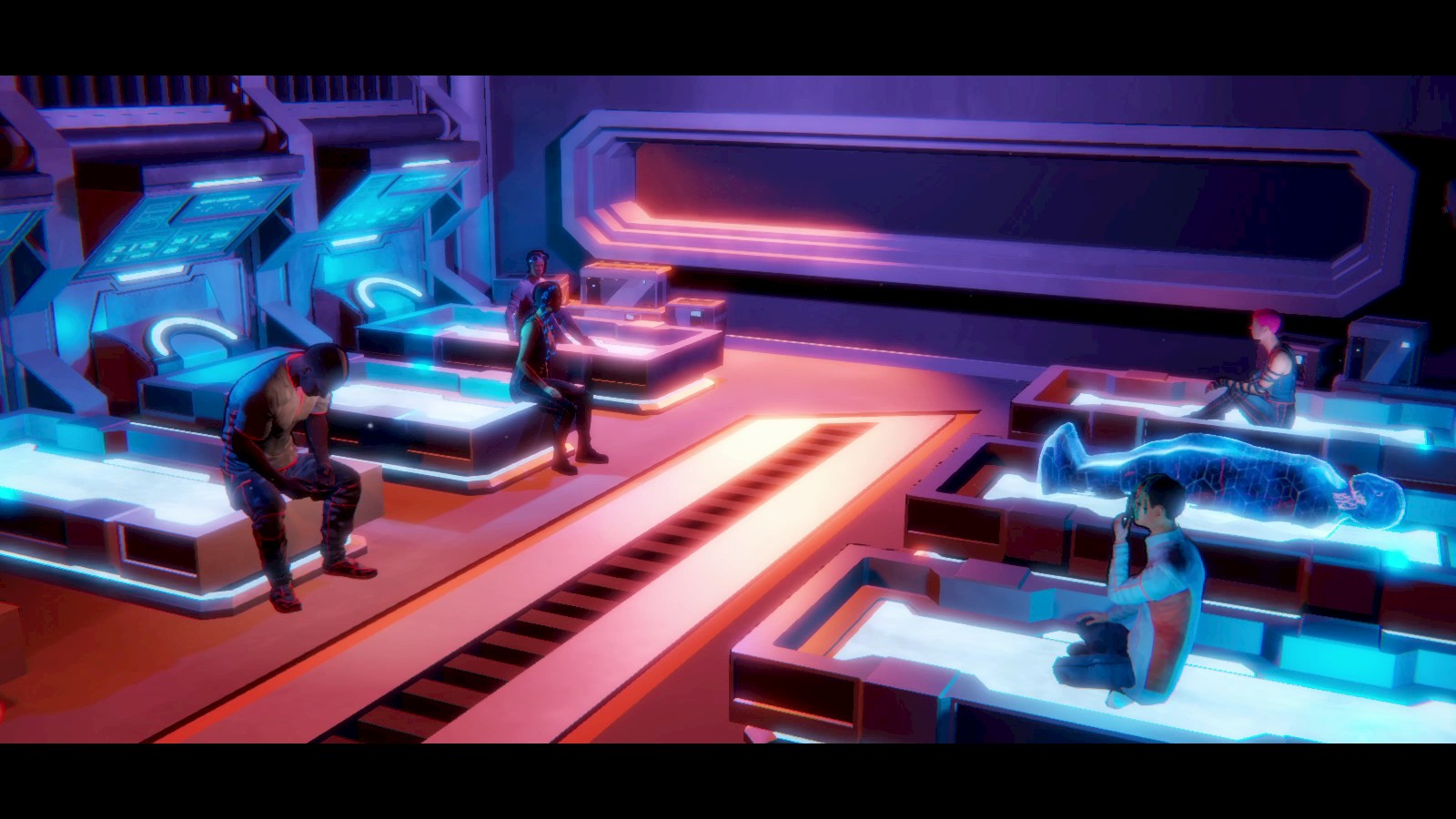 This is the most abstract puzzle game that I’ve played since Antichamber, which indicates how infrequent this sort of puzzle game is. In fact, I’d argue that it’s a little simpler to complete. It’s abstract in its presentation to the player, which is something I love about Primus Vita.

After being woken up, NIM explains the situation so that players know what they are up against. NIM then presents players with memories to relive. This is partial to entertain the crew, but also to restore relationships among each other. Once a memory section begins, Austin is facing a room a short distance away. Each memory has clues that Austin must find. The crew members will be part of those memories and decisions made in the interaction will determine the relationship status.

Players know how many clues are found in each memory by wall panels with a score out of the total. Once all clues have been found, the scenario completes.

I find this both good and bad. Players know exactly how much progress they’ve made, but it is restricted in progression by certain clues. What I mean is that sometimes a clue will open up a section that was previously unavailable. While there is an indicator of interactable items or people, the little white dot is tough to see. To help the player, there is also a sound to accompany the interaction but sometimes the game sounds mask it. In short, while the game is abstract in visual design, puzzle progression is quite linear.

Because of the game’s design, players get the sense that Austin is narrow-minded, often missing crucial events that negatively affected her relationships. It’s quite intriguing, in my opinion. 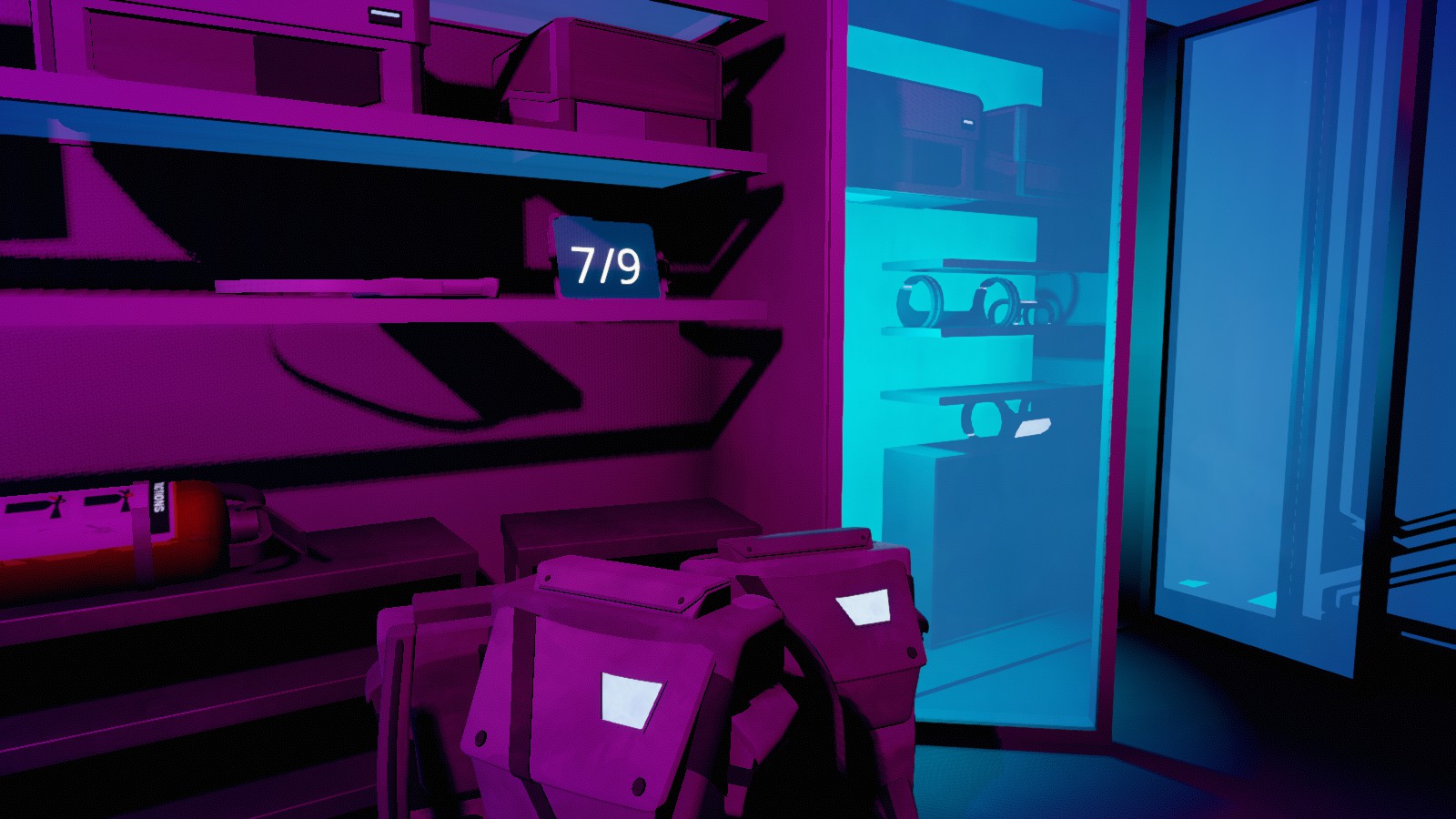 For the most part, I loved many of the puzzles like the generator puzzle or the collection of metal pieces. I half expected to solve the cryptogram puzzle, which uses the symbolic language of the Shatters, but unfortunately, that part is solved through dialogue – much to my disappointment. I happen to love cryptogram puzzles…

There were certain puzzles that were focused more on QTE than actual player input. Running out of areas when they are crumbling around them would have been much more interesting than a QTE section. Thankfully, there is only a handful of them, and that made me happy. I often find that their function in gaming is a simplistic means to an end.

Puzzles in this game are not difficult once players find the necessary clues. That said, there were puzzles that could be solved without direct interaction of the clue. For example, there is a screen that shows a path the players need to recreate. The solution to that puzzle can be seen at a distance. If a player doesn’t directly click on a clue, then the clue doesn’t show up for the puzzle hint.

Every puzzle requires players to think about what they’ve seen in the memories and they must use that information to progress. The ultimate objective is to restore the relationships, make the armor, and save Earth from the water thieves. 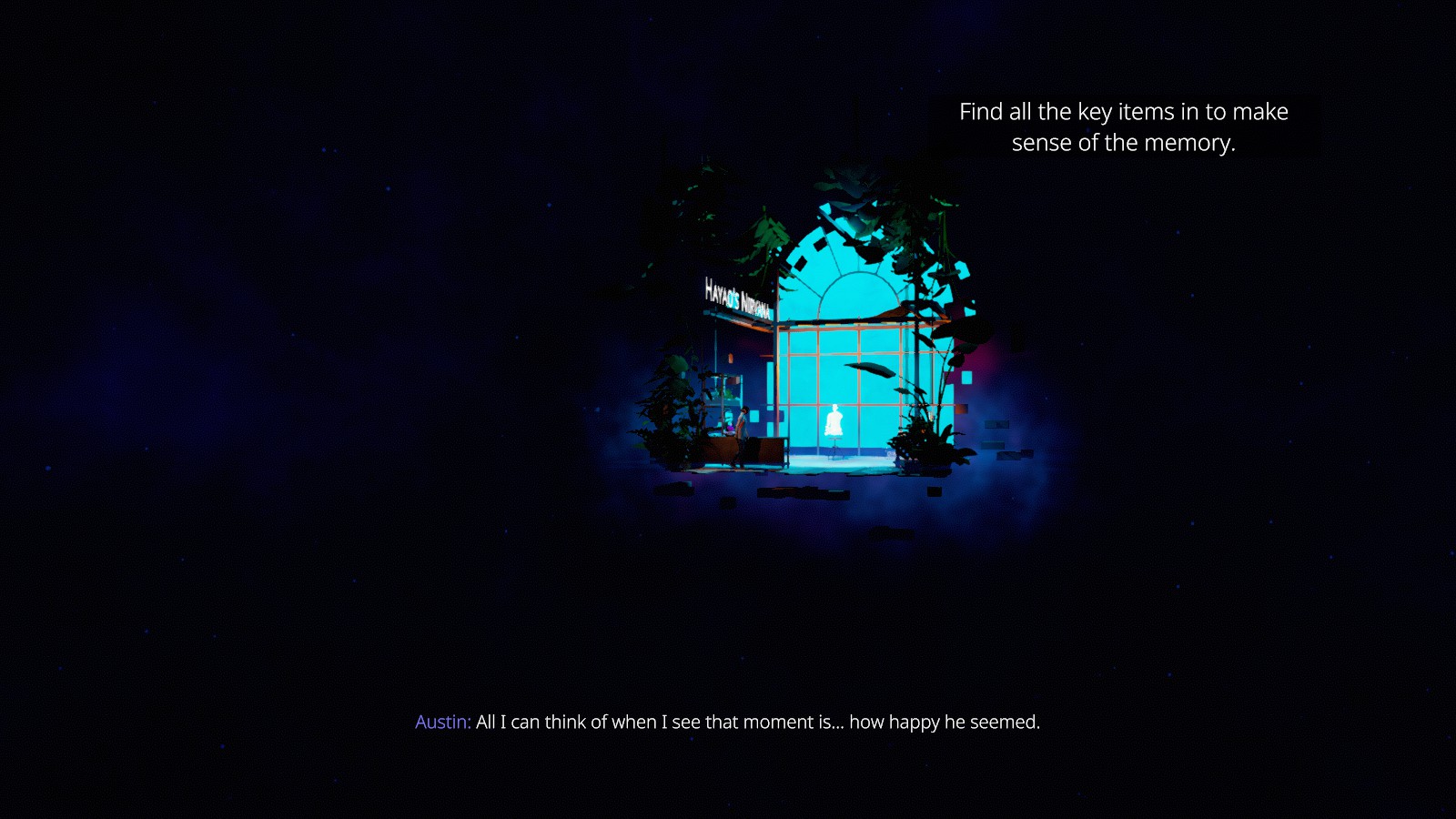 The problems I found in the game had nothing to do with the story and its ending heartbreaking revelation, it was the use of QTEs and two of the timed puzzles. I had issues with both but for different reasons.

As a general rule, I tend to find QTE sections uninspired and lazy on the part of the developer. In Primus Vita, I found that while I dislike the use of QTEs, it worked well when they were used. My issue with their use is that often in video games, they are overused and unnecessary. I know that it is a bias that I have, but it is one of the issues with the game for me.

The second issue is that I’ve never been a fan of timed mazes. But, my reason for that is because of how many times I had to restart due to a lack of options. It had nothing to do with visually teaching the player part of the Shatter’s language. Let me explain the lacking menu options to illustrate why I hated the maze sections. 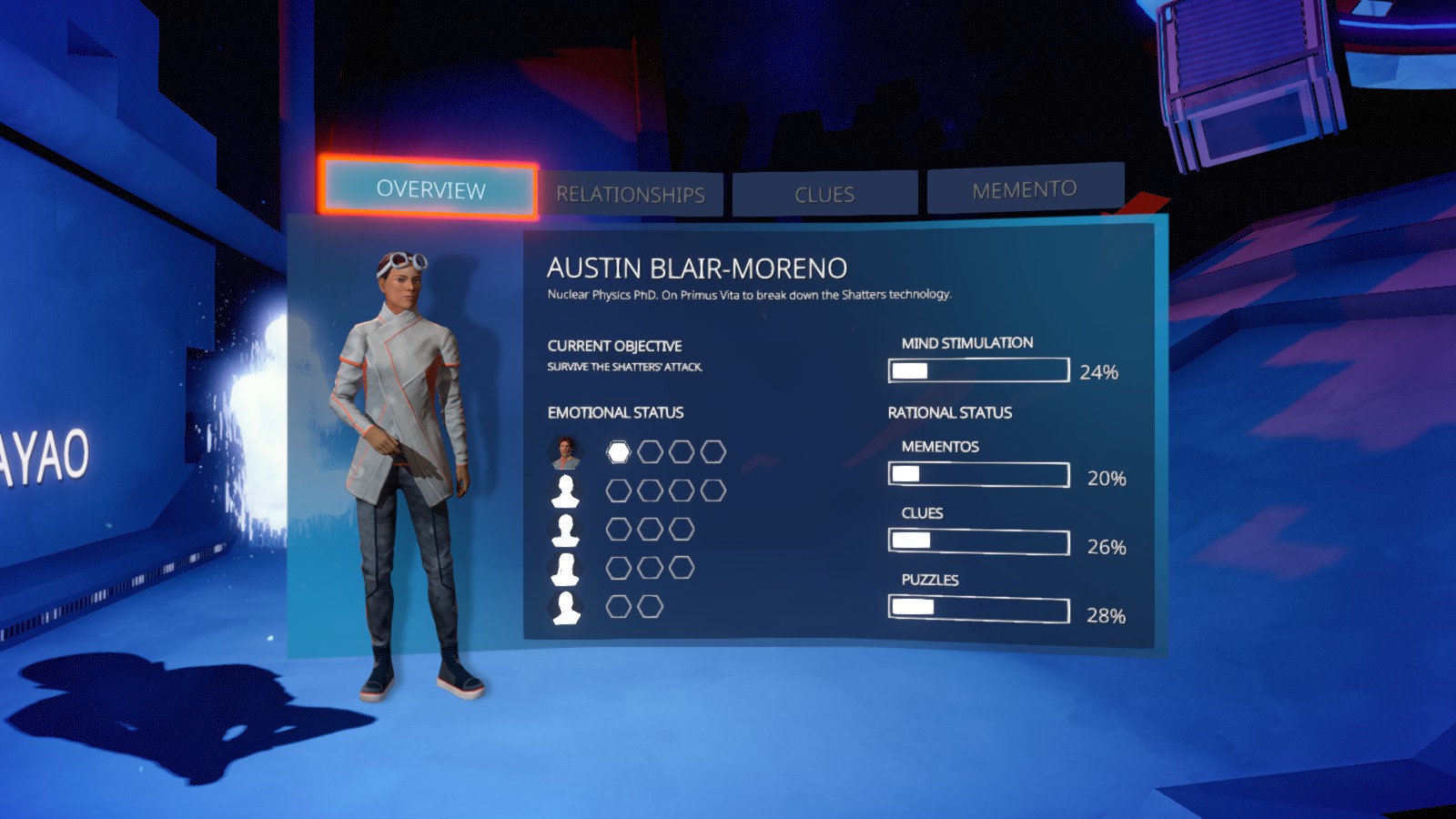 There is no fullscreen mode option! Players can increase or decrease pointer speed, but it isn’t limited to the game. What I mean is, when in the options menu, the game gives the illusion that it is being played in fullscreen mode. Once a player is back in the game, Primus Vita acts in borderless window mode. So, increasing the mouse speed is great in theory, in actuality, the mouse slid onto other monitors causing me to click on my desktop than the location in the game. This was particularly frustrating in the second maze. I failed it a bunch of times because of that one oversight.

As it stands, players can adjust volumes, choose inputs, and alter the pointer and navigation speeds. What the options lack are resolution sizes, fullscreen mode, and brightness effects. And while I feel that most of these options are not necessary, a lack of fullscreen mode sucked me out of an immersive experience.

Slightly related to the options menu is the UI functionality. After the second maze, the timer remained at the top of my screen. It wasn’t a gameplay issue but a mere nuisance that could not be rid of.

There were moments when I tabbed out of the game which caused the relationships menu to stretch beyond my monitors’ capabilities. It was unreadable. As a result, I couldn’t see my relationship status or momento list for the better part of the game!

Thoughts About the Game 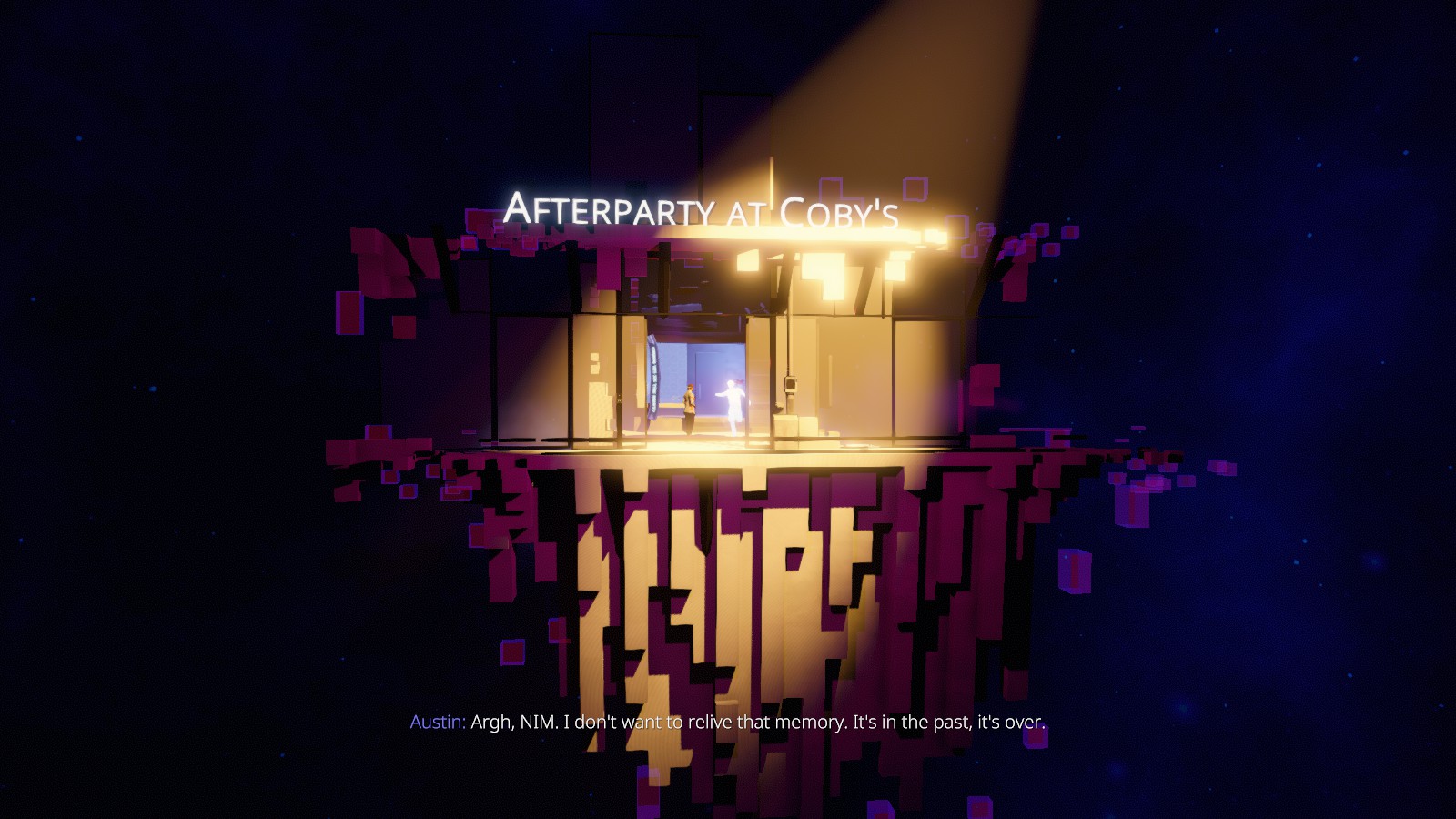 Even though I had my gripes, there were some pleasant story surprises. I quite enjoyed that Primus Vita’s puzzle design helped to shape the character growth and tell the overall story. It’s not often a game releases where the puzzles are the primary thrust. Each momento and interaction helped to fill in the story gaps without it feeling like the puzzles were simply there.

Despite the issues I had with the menu restrictions, I recommend Destination Primus Vita. It’s not hugely complicated and has a very compelling story.

My final score on Primus Vita is a seven out of ten. The game has an excellent foundation, amazing character development, and an intriguing narrative. As such, I look forward to the other character episodes. After all, I need to save Earth!

Destination Primus Vita: Episode 1 – Austin can be purchased on Steam. Be sure to check out their website for more information about the characters and the game. There is also a comic book!