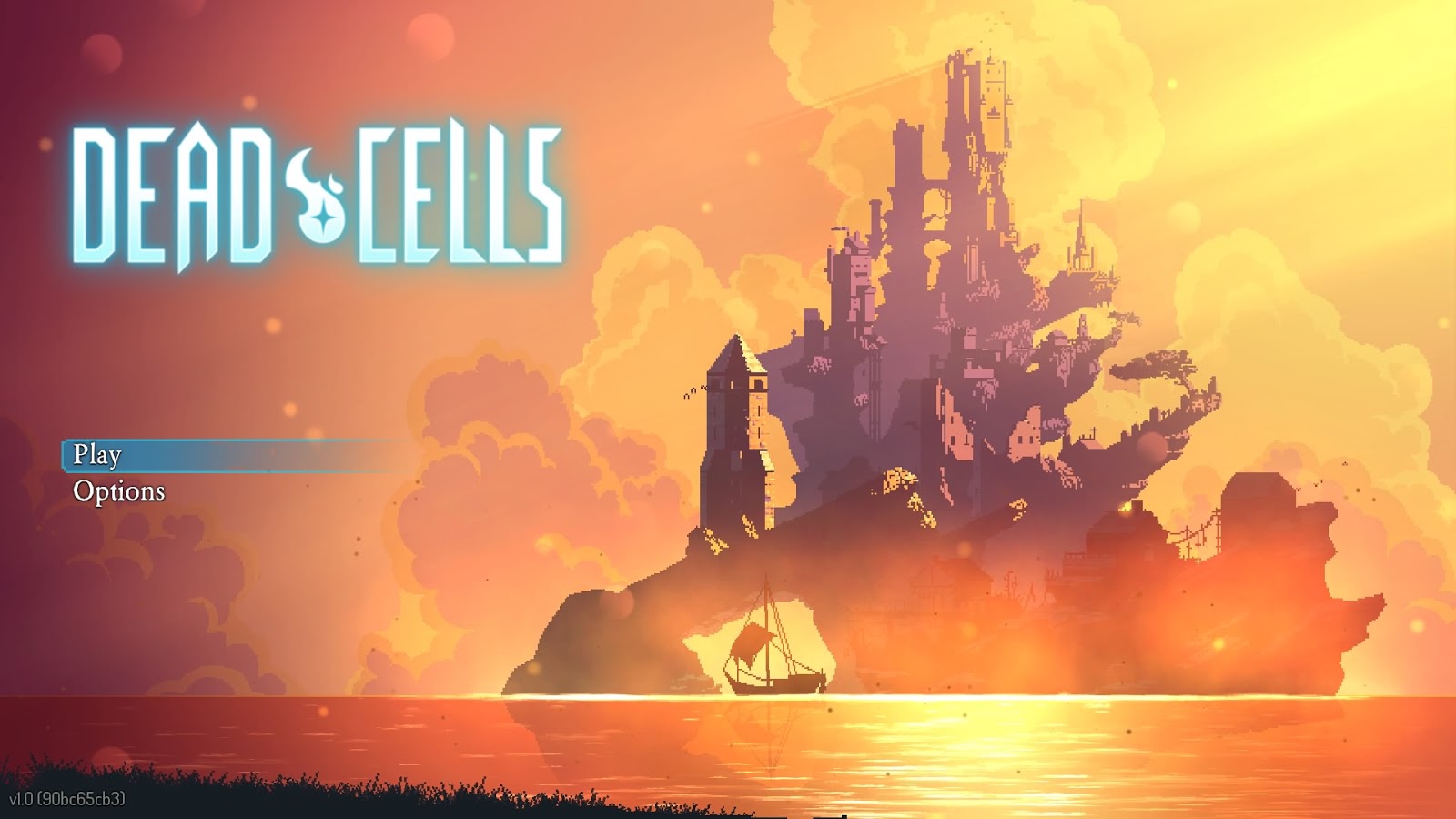 Dead Cells is a really interesting rogue-like that had me laughing, crying, raging, and celebrating, all within the span of an hour. If you like 2D rogue-likes, come and join us for a look at Dead Cells, in a review that has definitely not been looted.

To give a bit of a preface for Dead Cells, the feeling I got upon starting to play was a sort of Rogue Legacy meets the Souls series. Now, while I generally hate comparing something to the Demon/Dark Souls, the comparison here is more in regards to story and tone, rather than any semblance of gameplay or difficulty. You aren’t exactly given much of a story. You are some sort of amorphous pixelated blob, or series of cells I’d presume, that lands in a castle dungeon, upon which you immediately possess a headless corpse. That’s it, that’s all you’re given.

More understanding of the world, or castle in this case, that you’re in is revealed by exploring the castle and finding examinable objects that will provide bits of exposition or background. As far as I can tell, this king who may or may not be evil used the castle as a prison, and some sort of disease spread amongst the people. 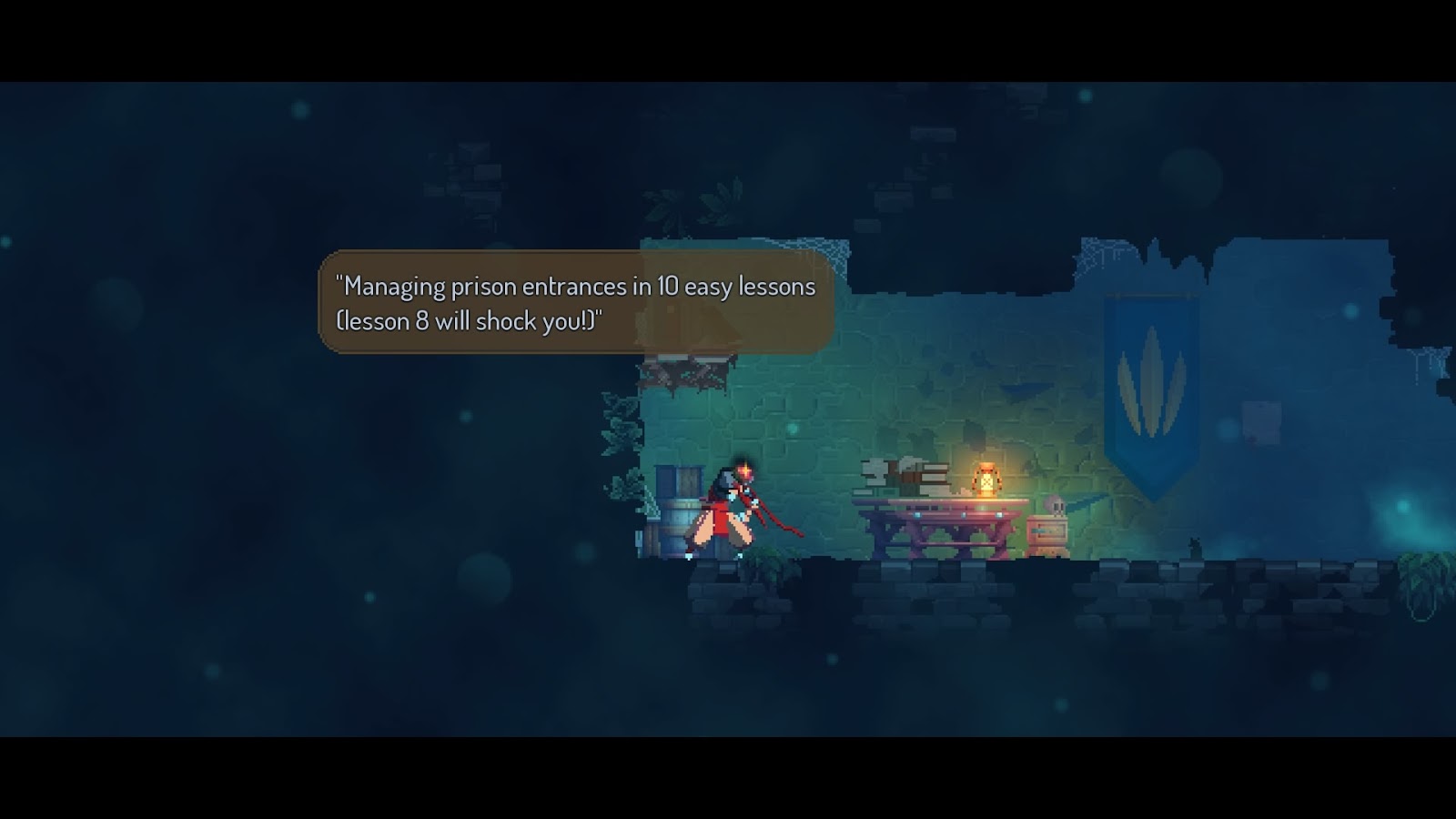 In terms of gameplay, Dead Cells is a rogue-like through and through in a lot of the traditional senses. You start off in the dungeon, collect weapons from enemies, collect blueprints for unlocking gear, gather stat increasing…paper?, and beat up enemies for their…life essence in the form of “cells”? Okay, so maybe not ENTIRELY traditional, but the main basis is there.

You have a 2D side-scrolling adventure where you can carry two basic weapons, two traps/skills, and an “artifact”, but you’ve gotta find those throughout the stages. If you die, then you lose all your gear and character upgrades, and need to start again from the beginning dungeon area, with the whole dungeon layout changed up on you. Thankfully, you can purchase permanent upgrades during every intermission that happens between area transitions, where you may also heal and acquire character traits, labeled as mutations. Mutations can be combo damage modifiers, health augments, or even a form of life leech.

During actual exploration of the castle, there are a few things you need to keep in mind. You have your two weapons and two skills, and they can all be used simultaneously. You are, however, restricted to only those weapons, meaning if you find more, you have no inventory, and need to choose if you’ll replace what you have, or leave the item where it is. While this is a perfectly acceptable gameplay mechanic in general, I would like to point out that drops are, primarily, very luck dependent. (Editor’s Note: I don’t even need to read the next sentence to start laughing at your bad luck!) In other words, it is entirely possible to make it halfway through the game without any sort of reasonable new gear provided your luck is that bad (that would be me, by the way). On the plus side, it certainly made me get more skilled at dodging enemy attacks and learning patterns. 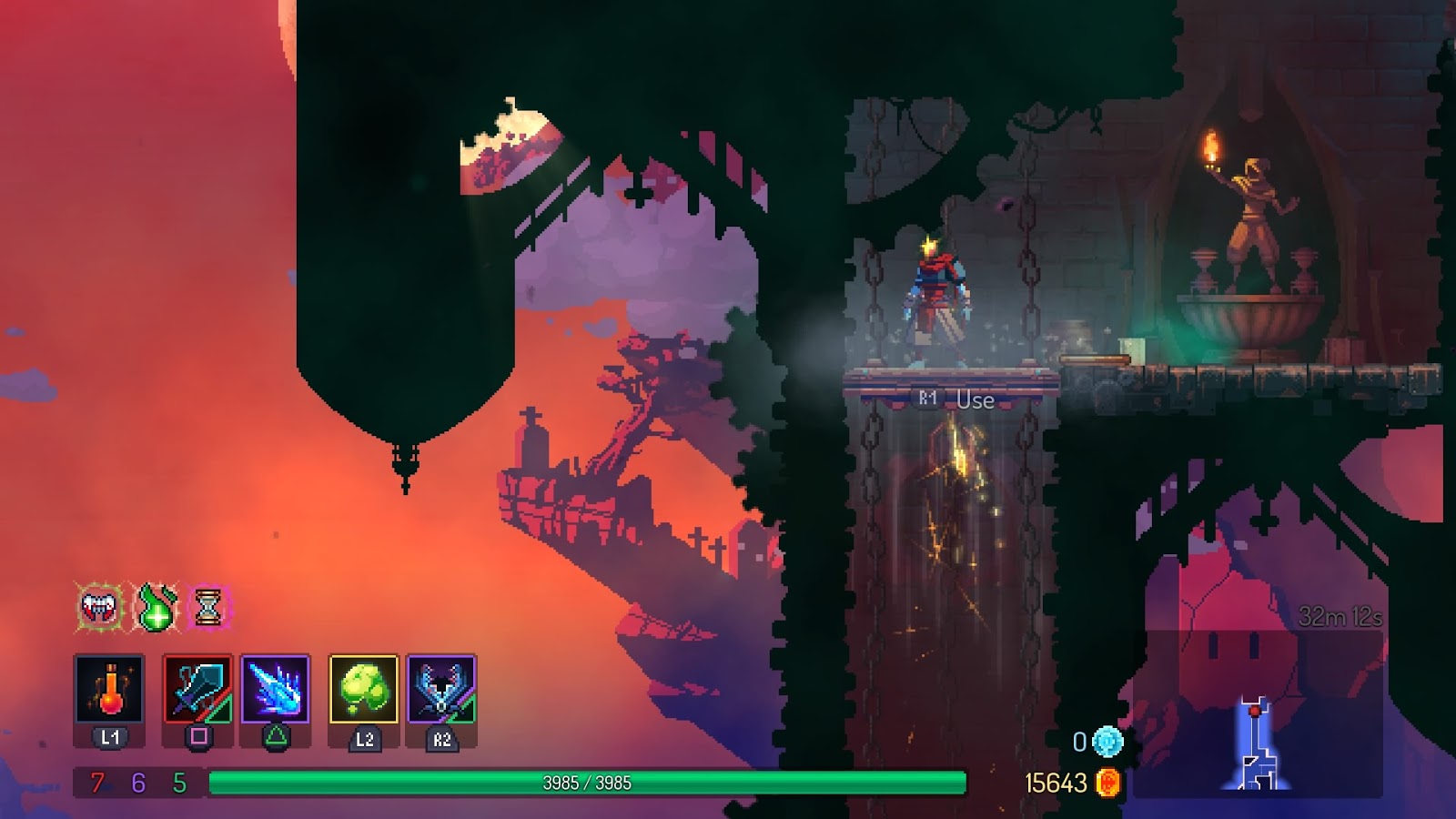 In addition to the fairly standard rogue mechanics, there are a number of really interesting aspects. Throughout your castle exploration, you may notice a timer near the minimap, that will fill in as you explore. The timer pauses during the intermission/upgrade segments, and will also pause when you enter a “room” with a chest, “choice”, or vendor, giving you ample opportunity to contemplate your choices. So what purpose does this timer serve, if any? Well, there are doors that will only remain open up until your timer hits a certain amount.

For instance, there is a door in “The Promenade” that I’m fairly certain closes at the 2min mark. This is an interesting way of promoting faster exploration, and really increases game pacing if you bother with the doors. Since you will not be able to return to previous segments of the castle unless you die, you need to balance exploration, speed, and enemy combat in order to work out a good balance of finding treasure/weapons, earning cells, or making it to the timed doors.

Fortunately, even if you die, upgrades and weapon plans will remain with you, although the weapon plans need to be unlocked by paying in cells, same with the general upgrades. Also on the plus side, you can “invest” cells into an upgrade, and have those cells remain used there. For example, if there is a weapon that costs 20 cells to unlock, if you put 17 cells into the weapon unlock, the weapon will still only require 3 more cells, even if you die. You can generally find plans in secret areas, dropped from enemies with a star above them, from elite monsters, or from bosses. 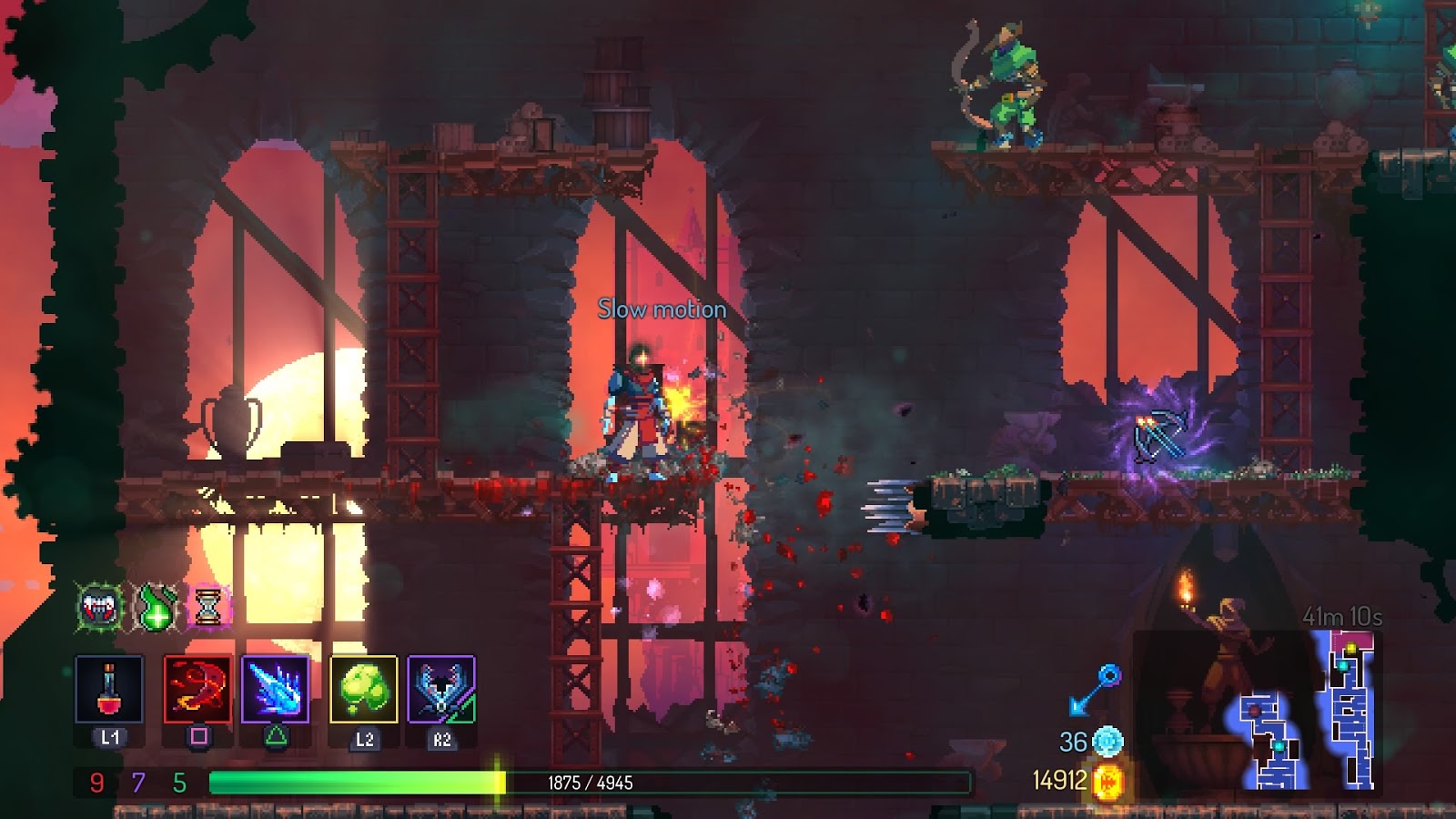 The elite monsters act as a very neat little optional miniboss, as you can simply avoid the obelisk/monument from which they spawn, although they tend to drop some nice stuff, and are the way you unlock runes, which are another permanent upgrade even if you die, and will usually allow you to explore new areas of the castle zones, and is also how you unlock the daily challenges, which are pseudo dungeon areas that give you a preset layout and time requirement which you need to beat.

With a timer and handy teleportation gates strewn about areas, Dead Cells certainly feels a lot faster paced than most of the other rogue-like games I’ve played. Even the combat, with liberal use of the dodge roll, feels a lot more fluid and technical. With a fresh soundtrack that I felt really captured the ambiance of each zone inside the castle, and some pretty dang nostalgia inducing pixel style graphics that aren’t grossly overdone or under-styled, Dead Cells is certainly a game I’d recommend for any fans of the rogue-like genre who are looking for a challenge, especially since there is such a wide array of platforms to choose from.