comments Share
You are reading
Memorable Music in Gaming #37 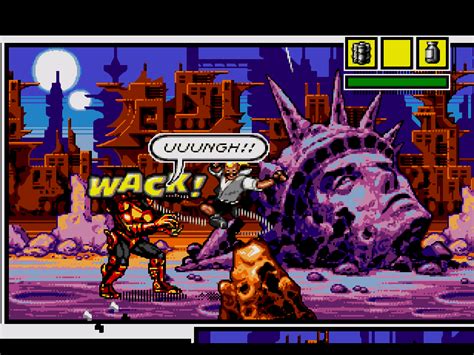 I have really had my retro gaming groove on over the last couple of weeks, due in no small part to the Sega Genesis Classics release. Seriously, I have hundreds of songs playing in my den, many of which I haven’t heard in a couple of decades. I can’t claim to have remembered them all, but it’s striking to me just how many of these 16-bit era tunes ring familiar as soon as I hear the first few notes.

This was such a unique game at the time, and while it was never my favorite, the visual aesthetic was undeniably striking as the game moved from pane to pane in true comic book fashion. Equally unconventional was the soundtrack, but songs like this help to bring a lot of life to the ‘on-page scenes’

I’ve long been a pinball fan (and have plenty of video game pinball reviews on this site to prove it). Sonic Spinball was a really unique take on the character and pinball. This particular song, with its frantic, explosive pacing felt the most ‘Sonic-like’ of the bunch in this game.

It’s kind of ‘easy’ to pick theme songs in compilation articles like this. They are often the most memorable because they are the first thing you hear when firing up the game. Oftentimes devs do their best to make it a particularly catchy song as well, knowing full well that it will be part of the first impression. In a game loaded with cool tunes, I admit that the intro theme feels a bit like a cop-out, but just listen to it. This was a very fun song and it really showed off how good the Genesis hardware could sound.

Columns was the first game I ever played on the Genesis. When my uncle bought his, he had only a handful of titles on it, and this was the one he was best at, so it was the one he started me on. It was also one of the only Genesis titles I could get my dad to play with me as well (as his favorite NES games were probably either Tetris or Duck Hunt – we dig our puzzle / action games apparently). The match-three gameplay was simple but addicting, and the visuals were crisp and pleasant if unspectacular, but there is a haunting, echoing quality to Clotho that hit me the moment I fired this game up again recently. It just SOUNDS like Columns in my mind and perhaps more than any other song in the Sega Genesis Classics collection, Clotho really took me back to my earliest days with the console.

So full disclosure: I don’t really love the Shinobi games. I remember the first one from the arcade super fondly, and I played through all of them on the Genesis (usually just renting them for the weekend – thanks again, Dad!), considered them entertaining enough and moved on. They always felt high production with solid sound effects, nice graphics and catchy music. Of all of the tracks in any Shinobi game, Whirlwind was always the one that stuck with me the most.