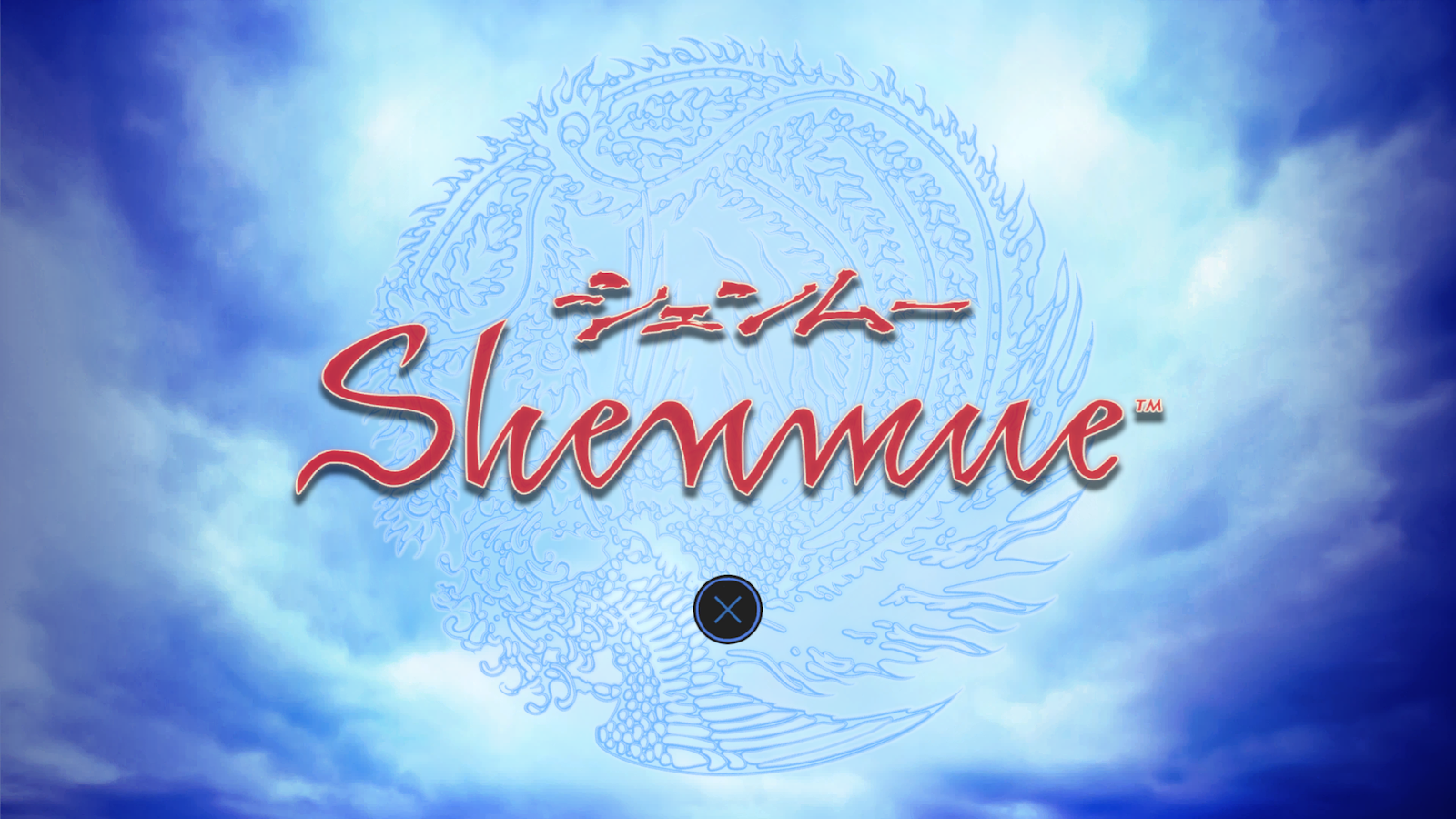 The year is 1999. I’ve got a PlayStation that I had only recently bought from Louis for 80$ which was just about all I had in my savings not yet having a job and no longer having an allowance. Games for me had become presents for my birthday or Christmas that while are thankfully six months apart, take some time to come back around and I just got The Legend of Dragoon. It looks fantastic. The cinematics were amazing even if the gameplay looked a bit blocky, it was still ahead of Square’s Final Fantasy VII. I didn’t know that Shenmue would be releasing, I didn’t know it was a thing, I didn’t hear about a Sega Dreamcast in earnest until Sega were no longer playing the console market. I now know that however, the Dreamcast was a ahead of its time and Shenmue? It in a way would be the benchmark for years to come.

If you would be to evaluate Shenmue from today’s standards then you may think that it looks dated, the controls are a bit clunky at times and the voice acting short of Ryo, your protagonist, is damned awful. In a way you would be right as Shenmue I & II is a remaster of an older title. That said, Shenmue is from 1999 and the closest that may come to it visually in the console market are The Legend of Dragoon and Final Fantasy VIII’s cinematics. Pre-rendered screens. Shenmue has one look and that’s for everything. Cinematics and Gameplay. The closest that would really come near to this now huge Cult Classic acing it’s Kickstarter for the third entry would be Square’s Final Fantasy X two years later on the PlayStation 2. Even then? Shenmue looks better.

The tale of Shenmue starts off on an early December morning when Ryo, your protagonist’s, father is murdered in his Dojo by a man named Lan Di. Vowing revenge after getting his assed kicked, Ryo leaves the house four days later in search for this man and will do almost anything in order to find him. I say almost anything as there’s a lot of ass kicking but no killing which means as mad as he is, there are some lines that he still will not cross even if it looks like he may come close to it at times. 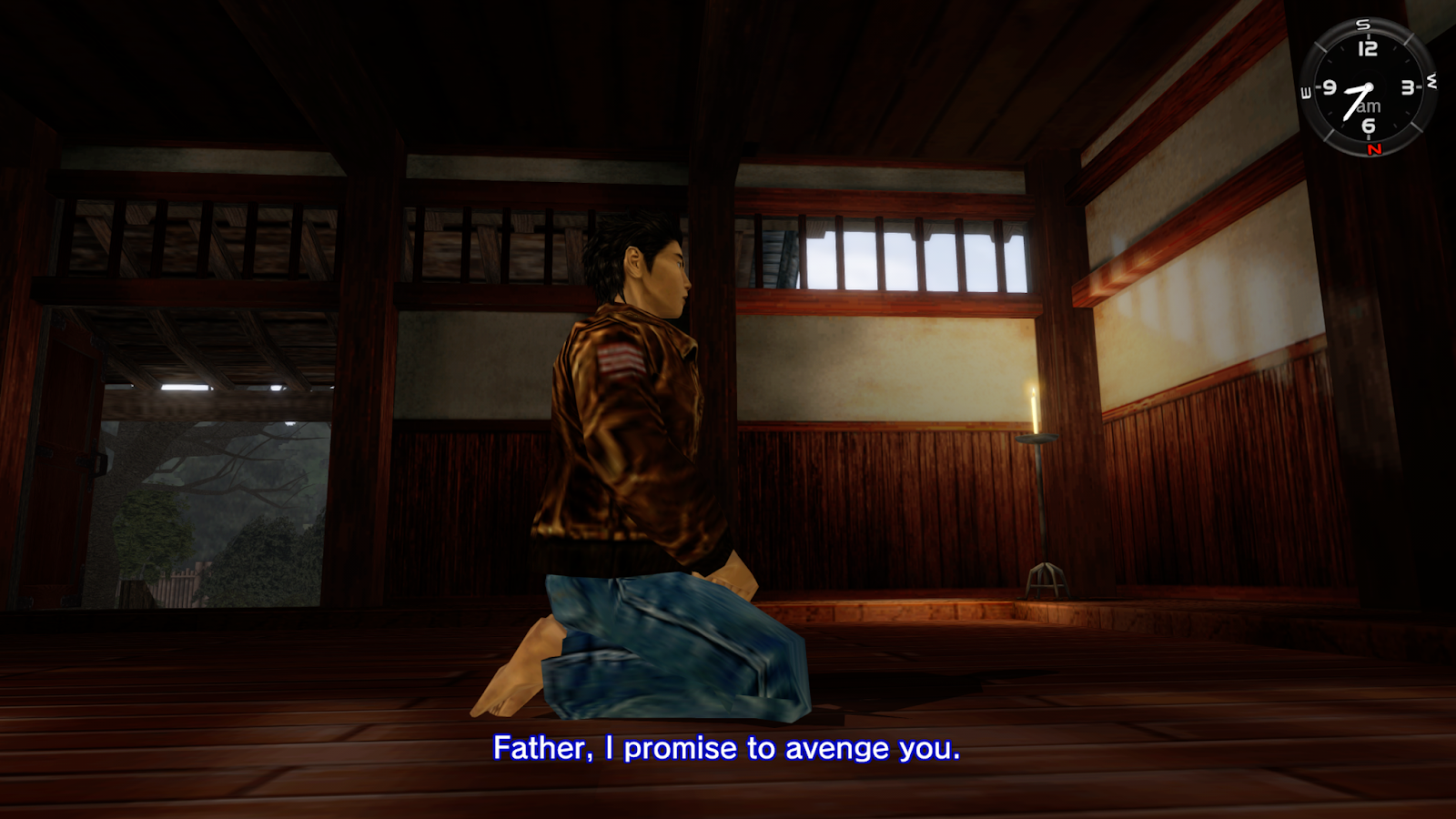 From this point, you are given control of Ryo and of where his search will take him. Keeping in mind that this released in 1999, the Japanese city that was realistically re-created for this adventure is amazing. Now while you may not be going into a lot of store fronts, there are still a fair amount that can be entered and loads of people to talk to even if most will simply ignore you or tell you that they aren’t interested in boys or being “picked up” when all you want is directions to find someone or somewhere. You’ll soon learn that you have specific people to go to for most things and you’ll simply have the sleuth out the rest with these random passersbys.

Now as much as I would love, and I mean LOVE, to complain about the city’s layout? It’s been re-created from the existing one of Yokosuka, so if I was going to complain? It would be to the city planners at the time. That said, once you get your bearings, it’s like any city. You learn the shortcuts and you know which paths to take in order to cut down on the time it takes to make it from point A to B. The only real issue becomes learning your landmarks because there are no mini-maps and the most you have to help direct yourself are maps posted throughout the city stating that “You are here”. It does help but I’ll be damned if I didn’t get lost multiple times looking for one particular shop that I literally ran by because I was looking on the wrong side of the street.

What makes Shenmue really interesting is that while it can feel like an RPG, it’s more of an action adventure simulation with added elements such as combat, minigames and what probably was the father of QTEs. Quick Time Events. That’s right people, Shenmue LOVES its QTEs and this was back in the PS1 era of things long before the PS3’s Golden Age of these mechanics. That said, and while they are part of my list for worst mechanics ever, they work. As much as I hate the dreaded things, they actually work and enhance the performance, not detract. The reason for this is because of how natural things feel, as it is a living and breathing city, you don’t just go around picking fights with people and grinding for experience. Instead, the fighting known as Free-Fighting, comes around once in a while but doesn’t really show up in earnest until near the end so because of this, the QTEs that are prompted cut down on the nonsense and feel like they belong. 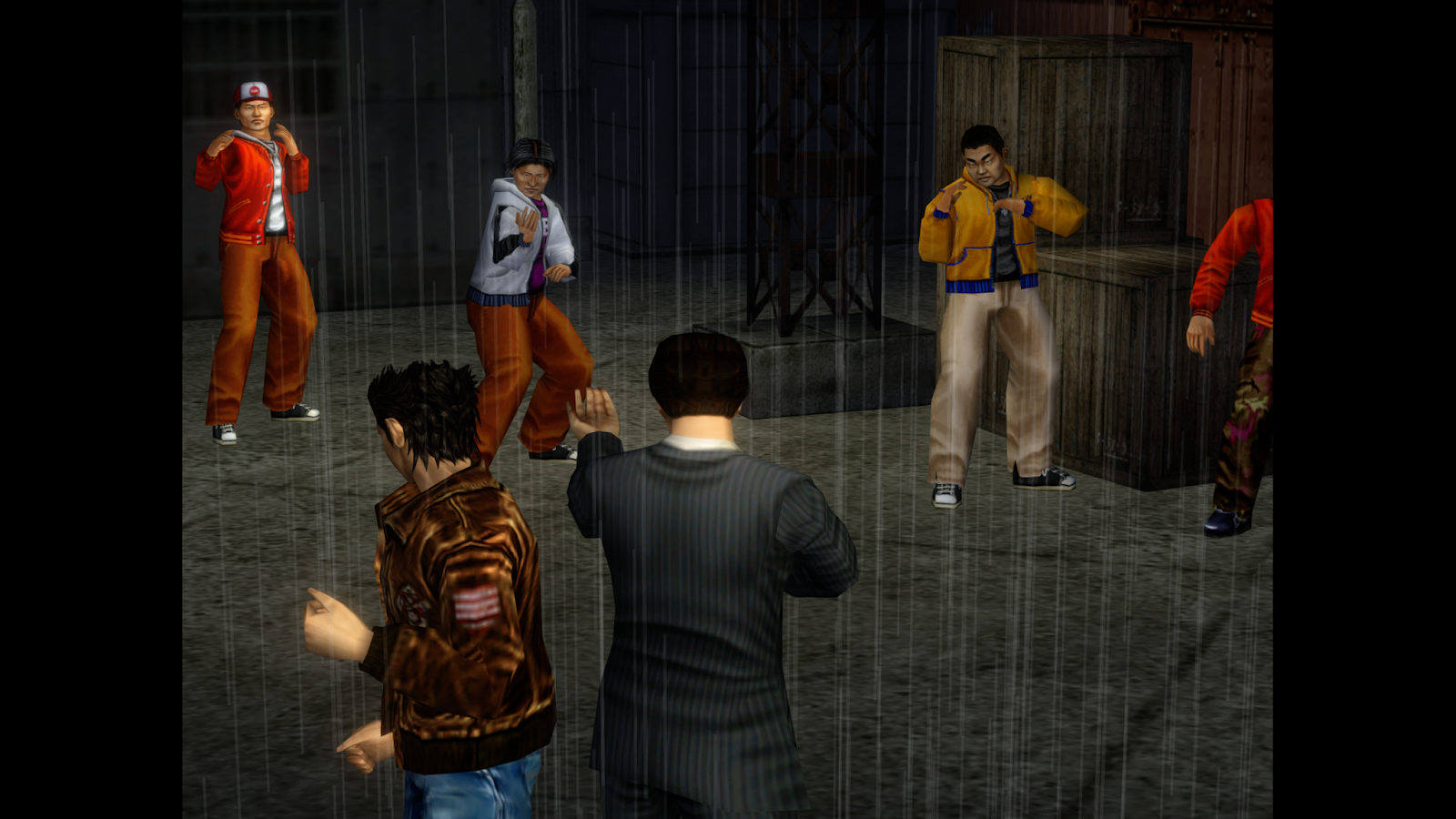 Like a lot of other features with Shenmue, the Free Fighting was ahead of its time. In these moments you’ll be put into situations that are normally one versus many unless it’s a badass of some renown which then generally makes it a 1v1 in which you’ll have to pull out all of the stops. While in this mode you’ll be able to punch, kick, dodge and throw your enemies as part of the basics. From these basics come about more powerful moves and combos that can be learnt allowing you to dodge by your enemies and then smack them in the back for a good deal of damage sometimes knocking them out much faster than simply trying to punch them in the face.

While in these combat scenarios you’ll have a health wheel that gives you a general idea of how much “damage” your own hits will deal as you inadvertently take some yourself. There are tutorials that will help you figure out your move sets but until get the chance to experience them yourself, you won’t really get a feel for it until your first fight that throws you right into the thick of things. It’s fun though and one of the better martial arts systems that I’ve had a chance to experience. While punching or kicking you can not only dodge enemy blows but your own moves can be deflected as they would be against someone who knows how to fight. It keeps with the realism that has been set out from the beginning instead of being simply tacked on for nothing better than smacking someone as an interlude.

There are two large negative points to all the above however. The first, and perhaps the more annoying of the two even if keeping in mind the original release, is “time”. A lot of events won’t happen just because you’ve triggered the necessary markers for them. A lot of these events will require both the markers to be hit and for the time of day to be within the necessary window. As there’s no way to move time forward, say by moving the needles on your fancy watch, you’ll literally have to sit there and stare at the needles until they move into place. Making things even more arduous is that you can’t go to sleep until past 9pm meaning that not only do you have to watch time go by, but often you’ll be killing time both for waiting for something to happen or waiting to go to bed so that you can start waiting for something to happen. 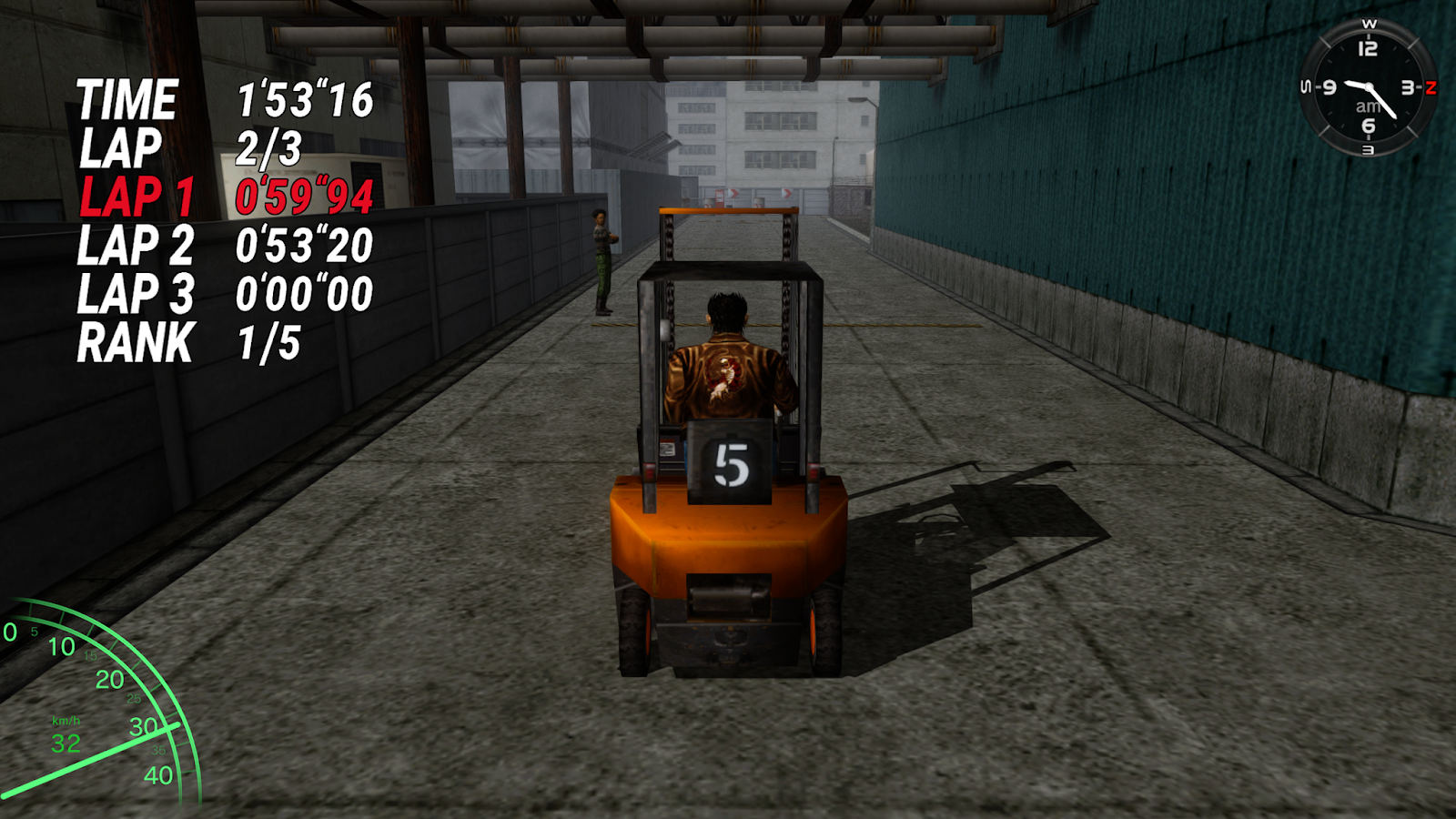 Kicking things up a notch negatively, is the what I’ve found out to be the “third disk” portion of the first adventure. It’s long. It’s not that interesting for the most part. And you’ll have to do it again and again and again. Kind of like going to work for a 9-5 because that’s exactly what you have to do! Waking up in the morning you’ll start the day off with a forklift race. From there you’ll be given a map with how many crates you have to move from Site A to Site B. There’s a break for lunch where things can happen which spices things up, but then it’s back to moving things from Site A to Site B until the end of the day. Once that’s over you’ll have to ask around for info until finally something happens or 9pm rolls around and you can finally take the bus home. Oh, you also have to wait for the bus which is just as annoying as real life because it passes just as you get there. Go figure.

Once you get to the end of Shenmue it’s a rollercoaster of Free Fights and QTEs making up for that long and overdrawn 9-5 job that you’ve had to do for the past couple hours. 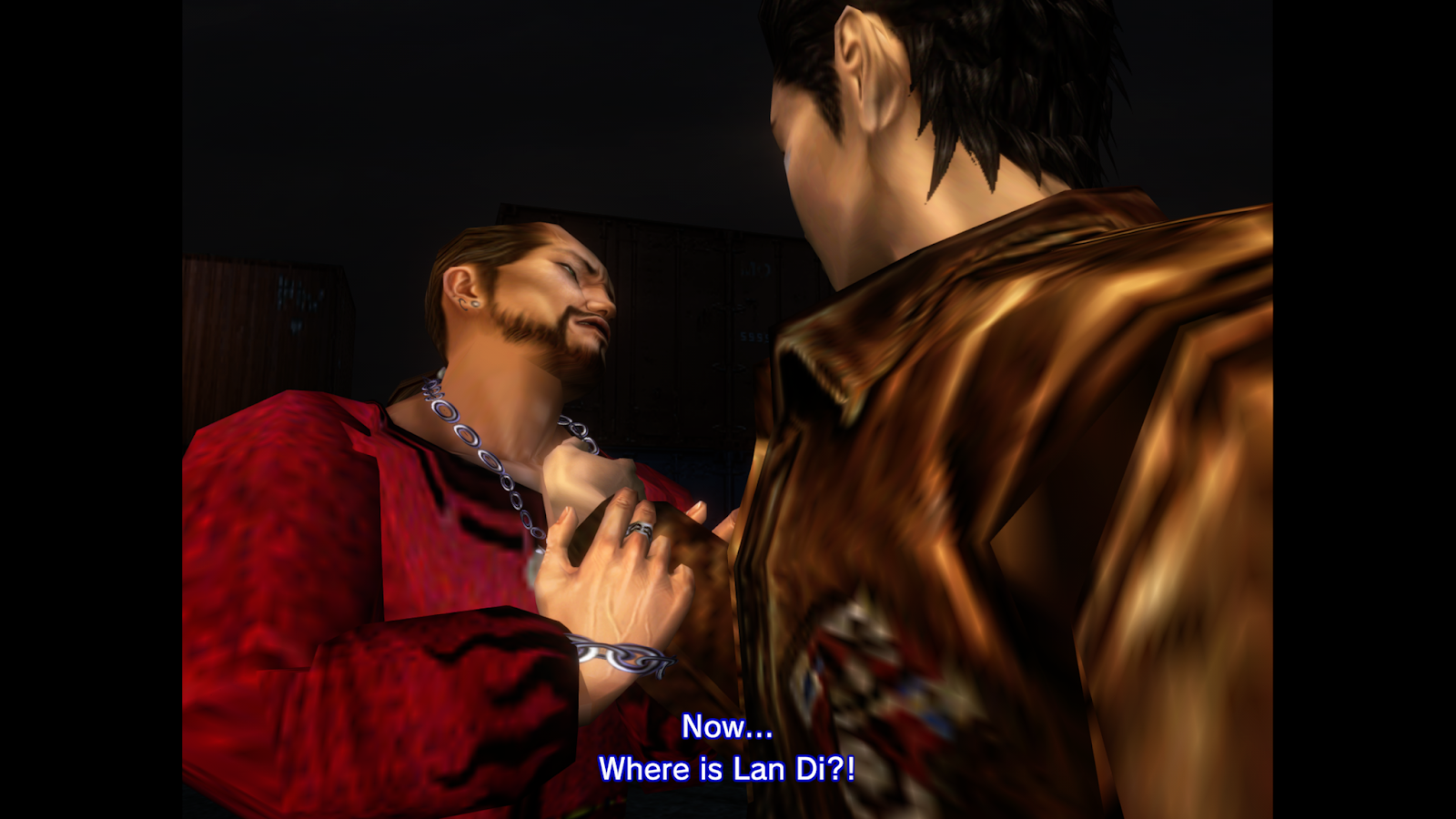 After finally getting the chance to sit through Shenmue I can finally see why this Cult Classic has not only had the following that it does, but why everyone is so excited for the third entry and why it blew right through its Kickstarter goals.

Where the score you may think? The re-release of these classics go together and honestly I have literally just finished the first and wanted my impressions of it un-biased by the second so? Come back tomorrow for Shenmue II and the final verdict!