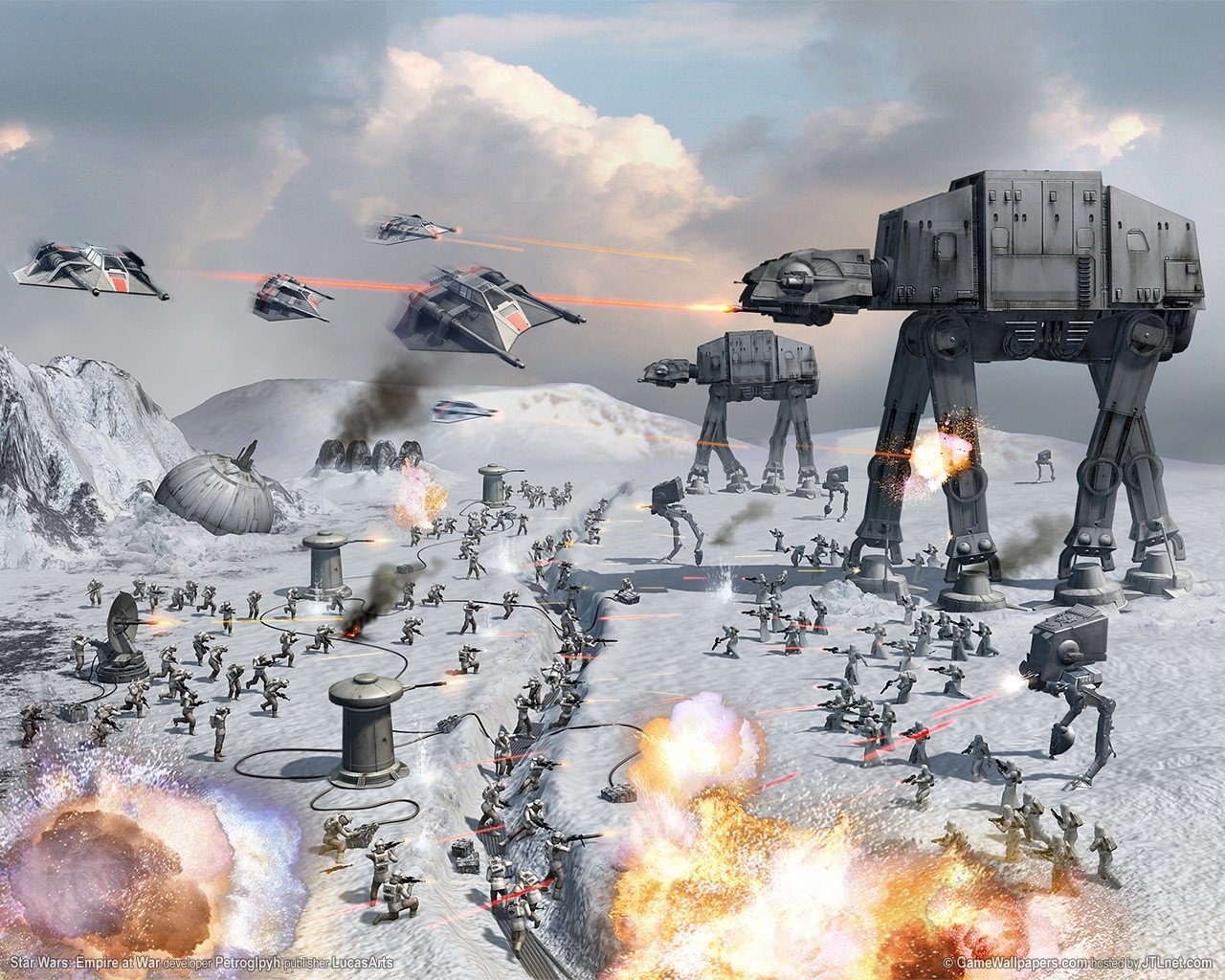 Star Wars: Empire at War is an interesting, and brutally difficult, strategy title. With 4x elements tied into more localized ground and space battles that are straight out of an RTS game, Empire at War will challenge every aspect of your strategic thinking. Though ground battles are relatively dull and managing your empire in the galactic view can be mindbending, where Star Wars: Empire at War truly and indefinitely succeeds is in its space battles. In a game as large as Empire at War, happening upon a space battle is an exciting reward for the grind that is empire management and ground combat. With the help of the cinematic camera angles and deep tactical thinking, combat in space between your forces and those of the enemy, are so incredibly rewarding that they put some of the combat in dedicated RTS titles to shame. The core game is just the start, as Star Wars: Empire at War, a game released almost 13 years ago, is still standing strong due to an extremely passionate modding community. If you have a few dozen hours of free time and are looking to crush the Rebel Alliance or stand firm against the might have the Imperial army, then Star Wars: Empire at War is right for you.

While the base game for Star Wars: Empire at War is an excellent game that was critically underappreciated, likely due to it being incredibly difficult, what has really given it its sustainability over the past decade has been its modding community. That very mod flexibility is what is driving this particular Retro Reflection, as the base game is so simplistic when compared to the mods. The base game seems to focus less on a large-picture and more on the localized, “in-the-moment” battles, as I feel each “mission” is a linear step-by-step process for Galactic domination. In mods like Awakening of the Rebellion, Thrawn’s Revenge, or Republic at War, the base game is expanded to incredible levels, making the game far, far more dramatic and makes the small-time battles far, far more significant. In many cases, a loss in one of those battles can cost entire portions of the galactic map to be lost, or a win can lead to complete galactic conquest. In all likelihood, this article will focus more on the mods than on the actual game, largely due to the fact that the core game is far “smaller” in scope and scale than the mods that are keeping the game alive. For that fact, this Retro Reflection will be largely based on the Awakening of the Rebellion and Republic at War mods. Seriously, spend an hour or wo playing the core game then play 30 minutes of either of those mods and you will understand why the focus of this article is less on the core game and more on what makes the game truly special.

Note, If you are into board games and have had a chance to play Star Wars: Rebellion then you will find a ton of similarities between it and Empire at War – Awakening of the Rebellion or Republic at War. Now … on to the good stuff. 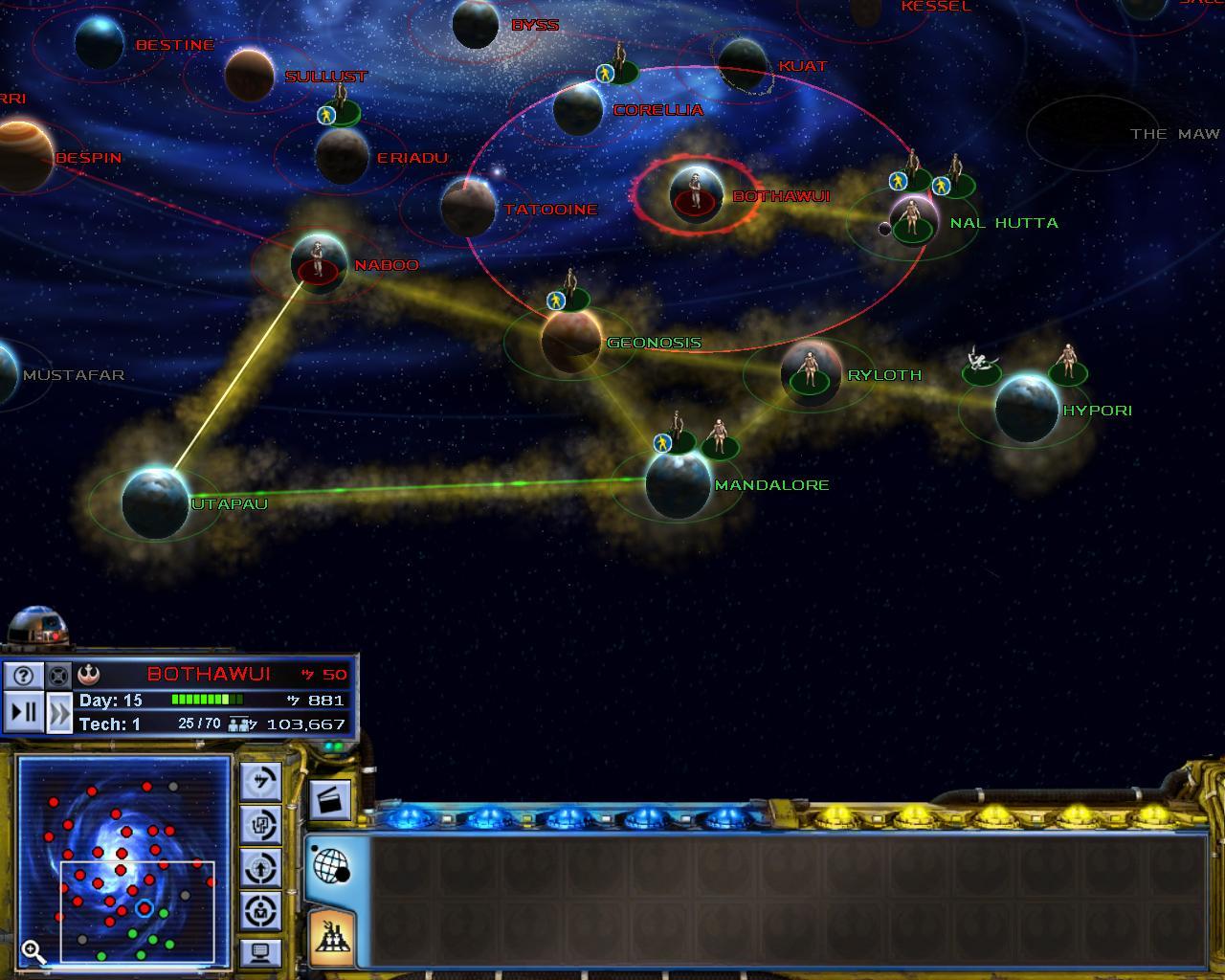 First, I am going to tackle the Awakening of the Republic mod, as it changes the timeline of the base game from pre-Death Star to post-Death Star. The core game starts while the first Death Star is still being built and it is up to the Empire to crush the fledgling Rebel resistance or, as the Rebels, race to destroy the rumored Imperial super-weapon. Awakening of the Rebellion though, takes place around the same time period as Star Wars Episode V: The Empire Strikes Back, where the Empire is trying to maintain control of the Core Worlds while the Rebel Alliance is gaining momentum and working to crush the Imperial menace for good. What I love about AotR is that every single ship is immediately recognizable (where as many in the base game seem to have some creative liberties taken), and the overall “feel” of the galaxy *feels* like it belongs in Episode V. The mod team really captured that rough-around-the-edges Rebellion feel and I love it. Where it also changes things is in the scale; by playing as the Rebel Alliance (which you should do, rather than the Imperials or the Black Sun mercenary group), you start in two separate locations, Hoth and Mon Calamari (and the surrounding planets for both).

Generally speaking, the mod also maintains a lot of the lore surrounding said planets. This means that those mentioned in canon content that have been liberated by the Rebels or are under the rule of the Imperials; a nice touch, rather than the seemingly random mish-mash found in other mods or the base game. The one critical issue I take with both the base game and the AotR mod has to do with the ground combat; in both cases the ground combat seems to take forever, which is a shame because the space combat is where it is at in those versions of the game. Some planets are hit constantly (to a point that only a few moments can pass between combat sessions) and become so repetitive, especially in the early phases of the game where ground battles can take upwards of an hour at a time (compared to the 5-10 minute space combat sessions). It is incredibly annoying but as the game goes on and those contested planets are upgraded, combat on the surface eventually just turned into rushing your units down to the invading army’s spawn point and blasting them as they land their troops. Repetitive indeed.

Upgrading planets is something unique in Empire at War when comparing it to traditional 4x titles. In say, Distant Worlds or Galactic Civilizations you upgrade commercial, military, or science elements and from there you gain influence, economy, or open access to more powerful military vessels. In EaW and its various mods, “upgrading planets” is largely military-oriented, with a few planets (like Bespin, which is a massive money-making planet) that can build mines or casinos. The ground-based upgrades are essentially mines, barracks for infantry, or factories for vehicles. Some planets can sustain ion cannons or hyper velocity platforms which though expensive, are utterly crucial to defending important locations; a well-timed ion cannon blast can disable an Imperial Star Destroyer or strip its shield, allowing a few wings of Y-Wings to swoop in and lay waste to subsystems (and unless you have some MC80’s in your fleet, hope to high heavens there is not a hyper velocity cannon is not in orbit, else whatever it aims at will be insta-dead).

Planets can also have systems built in orbit, space stations, Golan defense platforms, refineries or casinos, and on the production side they can build starfighter shipyards (B-Wings, X-Wings, T-95’s, etc.), frigate/corvette shipwards (woo hoo blockade runners!), or in some planets, capital shipyards. Though I am a sucker for the big flashy battles between capital ships, I am a HUGE fan of racing a giant pile of X-Wings, A-Wings, Y-Wings, a few blockade runners and a dreadnought or two, as Rebel fighters are heinous. However that fleet is often demolished after taking on a mixed Imperial fleet; fortunately it is not super expensive. It does, though, prolong battles as it is far more important to have a solid mix of support vessels, damage-tanking vessels, and fast attack craft. Pinpointing subsystems, like shield generators and engines can take a lot of the wind out of the larger starships, which then in turn prevents those crafts from escaping if the battle is not going their way. If you are looking for a *true* Star Wars experience, then Awakening of the Rebellion is absolutely the mod you want to dig into. You can find it on the Steam Workshop. 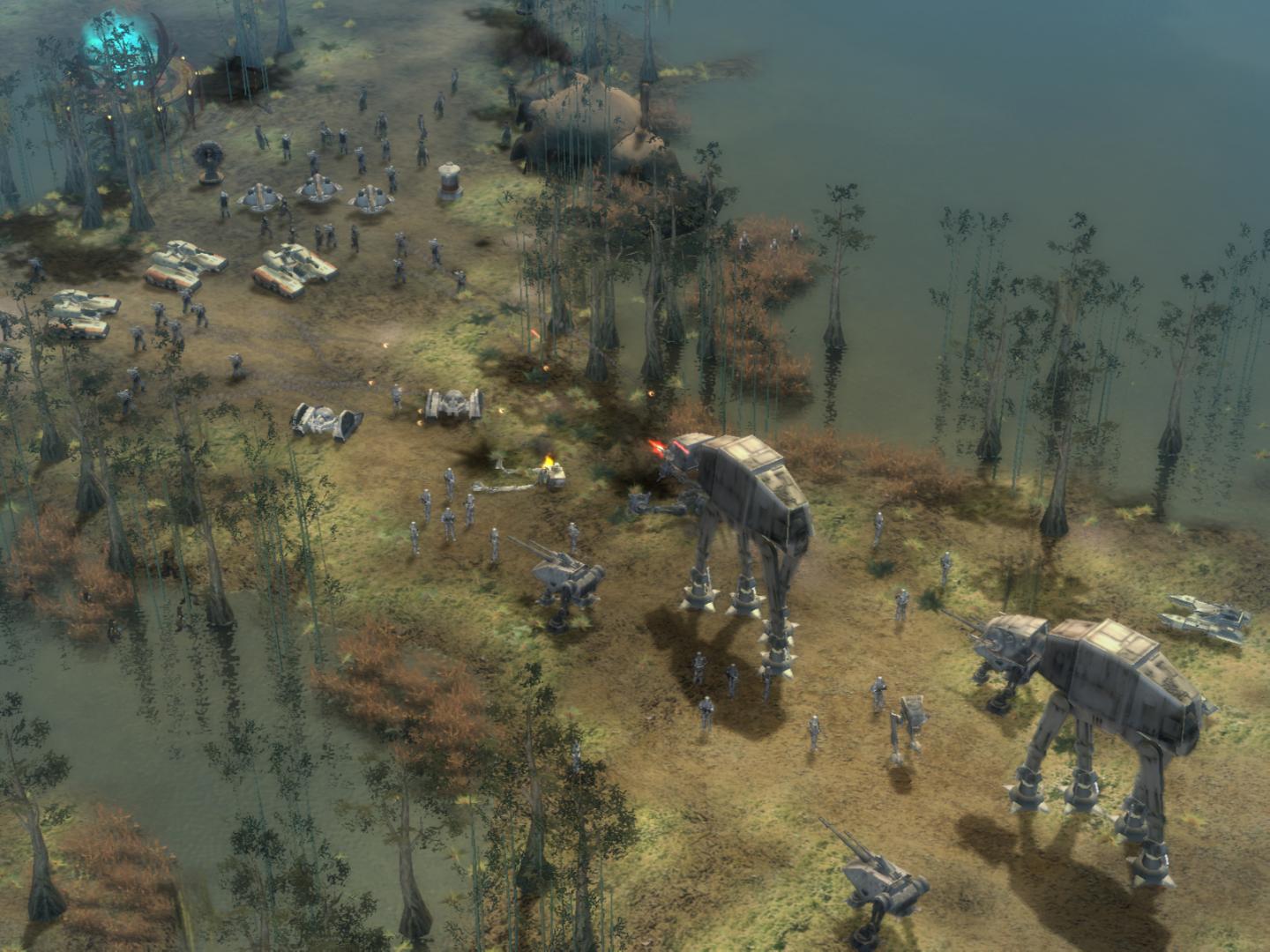 Moving back a few years in the Star Wars universe, the Republic At War mod is essentially The Clone Wars + Rebels, in game form. Replacing the Empire and Rebel Alliance with the Galactic Republic and the Confederacy of Independent Systems (CIS) and while I know very little about that period of time (I have seen the first three episodes of the Clone Wars TV show, and did not even know that there was another called Rebels …), I can say that I absolutely love the models in the Republic at War mod. In fact, I have had *dreams* about the Venator-class Star Destroyer, which I did not even know was a thing prior to Republic at War. I like it so much I am currently working on finding the appropriate instructions (and pieces) to build a Venator LEGO set (because buying one, if you can find it, is financially irresponsible). Anyhow… Republic at War is a grand campaign with a host of heroes (Yoda is seriously over-powered on the ground) that has more balanced ground-based combat that is far faster than the Awakening of the Rebellion mod, and given the host of ground-based heroes (so many named Clone battalions, seriously … so many), it is far more interesting.

Not to say space combat is not as awesome as it normally is, because it is, except CIS droid fighters and bombers are literally the bane of anyone’s existence. They drop buzz droids. Tons and tons of them, and they are the absolute WORST. They will swoop in and drop buzz droids on your corvettes and frigates and given the slow turn and acceleration rates, the ships just sit there while buzz droids just chew away at shields and hulls. They are so bad that other modders have taken it upon themselves to release mods that nerf the buzz droids by reducing the number that common ships can drop, or in some cases, limit them by reducing their damage to certain ship-types (like, buzz droids are nasty and all, but why the hell can a handful of them burn through an Acclamator, Arquittens, or an Interdictor?). I did find that space combat in Republic at War feels far, far more tense; possibly because the units are a bit more balanced.

In AotR X-Wings or Tie Intercepts are downright godlike; hell, playing as the Empire you can plop an Imperial Star Destroyer into orbit, maybe one or two small support ships, and you can utterly wreck a fleet two or three times its size, or as the Rebels, a few blockade runners, maybe a Nebulon-B, an MC80, and two or three Quasars will shred through the enemy … but not because of the big ships, but because of the FIGHTERS. In Republic at War it is not nearly as raunchy, but rather more balanced … Though it IS awesome seeing 4 Venators dropping in and roughing up a few Lucrehulks, because sweet, sweet pew-pews in space. Love it! Star Wars: Empire at War – Republic at War mod can be found on the Steam Workshop.

While the vanilla Empire at War is rich with Star Wars goodies, the mods are what really bring Star Wars: Empire at War to life, and if you are like me and are looking to maybe play a similar game but with a different franchise, fear not as there are plenty of cross-franchise mods out there! I myself am partial to the Covenant at War mod, which is a conversion from Star Wars to the Halo franchise (which is AWESOME), or if you are not afraid to be a fan of both Star Wars and Star Trek, there are plenty of Star Trek mods. Heck, there are Stargate mods, Battlestar Galactica mods, or, if you can find a working version of it, even a Mass Effect mod! So. Many. Mods. … and that is why, 12+ years later, Star Wars: Empire at War is still alive and kicking today. You can pick it up regularly on sale through Steam.