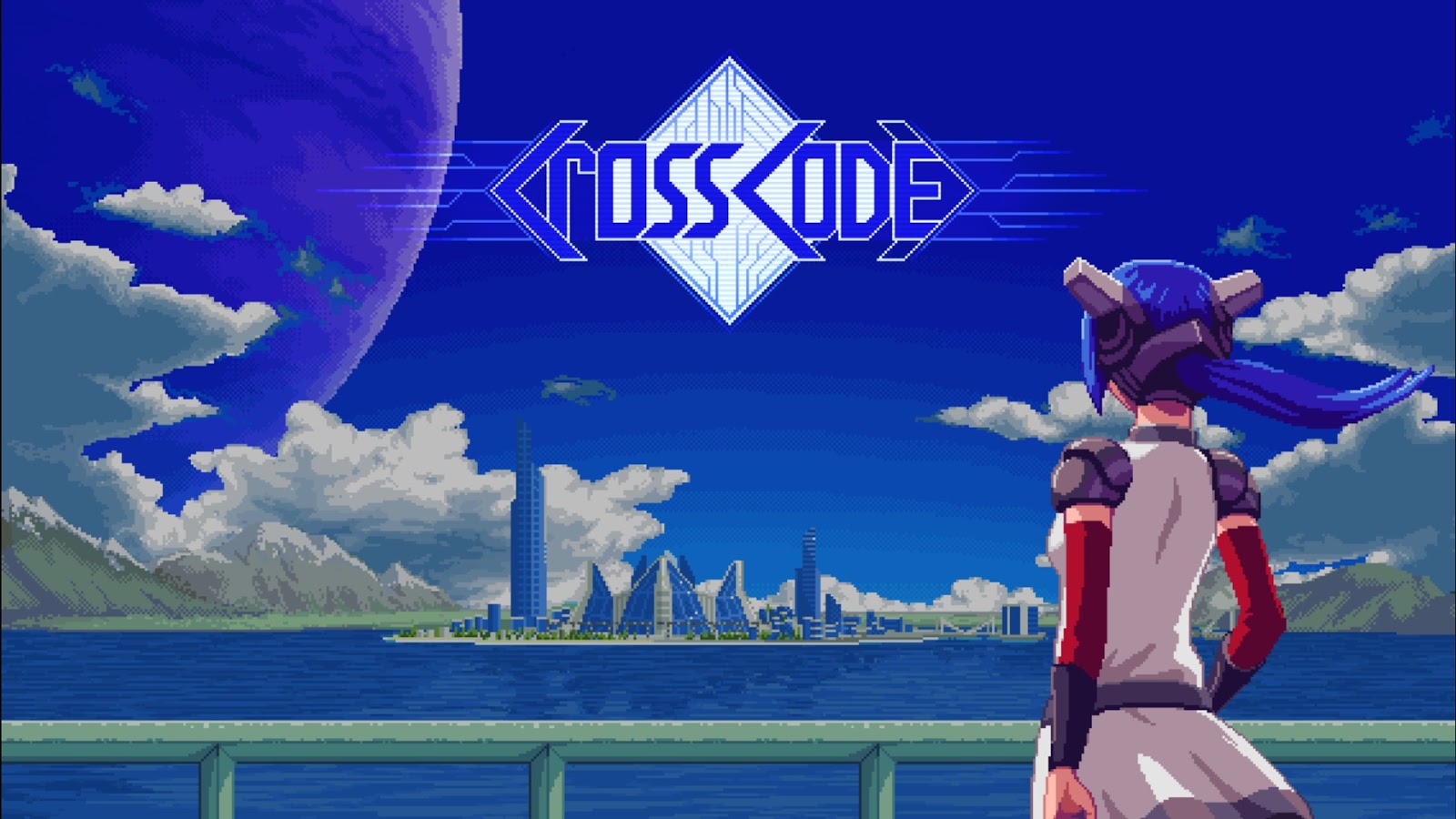 CrossCode may be my biggest surprise of the year. Following along with Lea, an amnesiac currently living inside of a fully immersive MMO, you’ll follow along her adventures through a amazingly 16-bit inspired wonder filled world that feels as alive as Ara Fell did.

Having fully released on September 20th after a good seven years of development, in which half of it was spent in early access, I’ve had a good deal of time with it both before and after its release. The gameplay is absolutely solid and even now I’m hard pressed to say anything negative about it. Because there isn’t anything negative to say.

Radical Fish Games have not only designed a retro looking world that would look amazing on a Super Nintendo, but they’ve created an experience that is solid by today’s standards. Load times are almost non-existent, combat is extremely smooth, there are different sets of menu options for how little you need to do or how much customization needs to be done. They’ve even gone as far as to allow the switching of a controller’s visuals from that of an Xbox’s to that of a PlayStation’s for it to feel more natural depending on your controller. 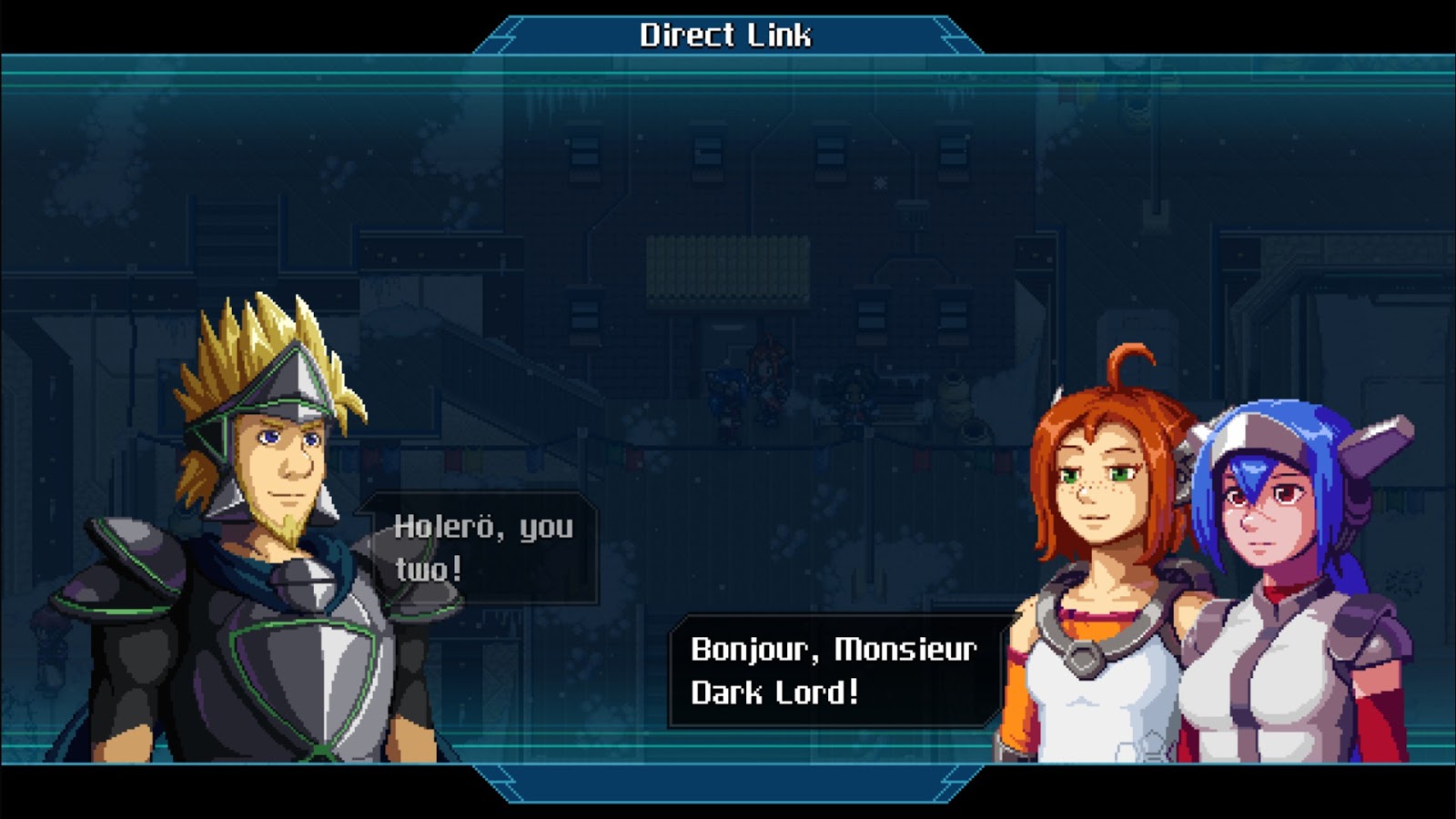 After what is essentially a super brief tutorial, the game starts in earnest in which you are slowly showed the ropes to the world that you’ll be interacting with. CrossCode, like .Hack or Sword Art Online, simulate an MMO while still being at their core a single player and offline experience. Also, like the two mentioned, you are given a class instead of being allowed to choose your own path as you are playing a specific character and not a being of your own design. And you know what? I couldn’t have been happier about this choice because of how it was done.

Being an RPG, you run around, follow story lines, complete quests, complete side quests and level up. As you level up, your base stats not only increase, but you are given points to use on a grid in order to customize Lea as you see fit. Do you want to be stronger? Tougher? More accurate as there’s a blend of elements in the mix. Not only do you get to run around with a variety of melee attacks, you also have access to a system for ranged ones that aren’t just tacked on, but are there as an actual combative option. You don’t even need to hit anything in melee if you don’t want to as the ranged system is just as powerful and often required to make your life easier.

Instead of simply using a twin-stick style to move and aim, aiming properly takes a few seconds to “calibrate”. Once calibrated a powerful shot can be unleashed and this shot not only has knockback properties, but when an enemy is glowing red, it has the chance to “break” them allowing you to cause more damage. Once the elemental systems come into play more versatility is added as weaknesses can truly start to be exploited and your enemies set aflame for much more damage than you standard non-elemental weapons would do. 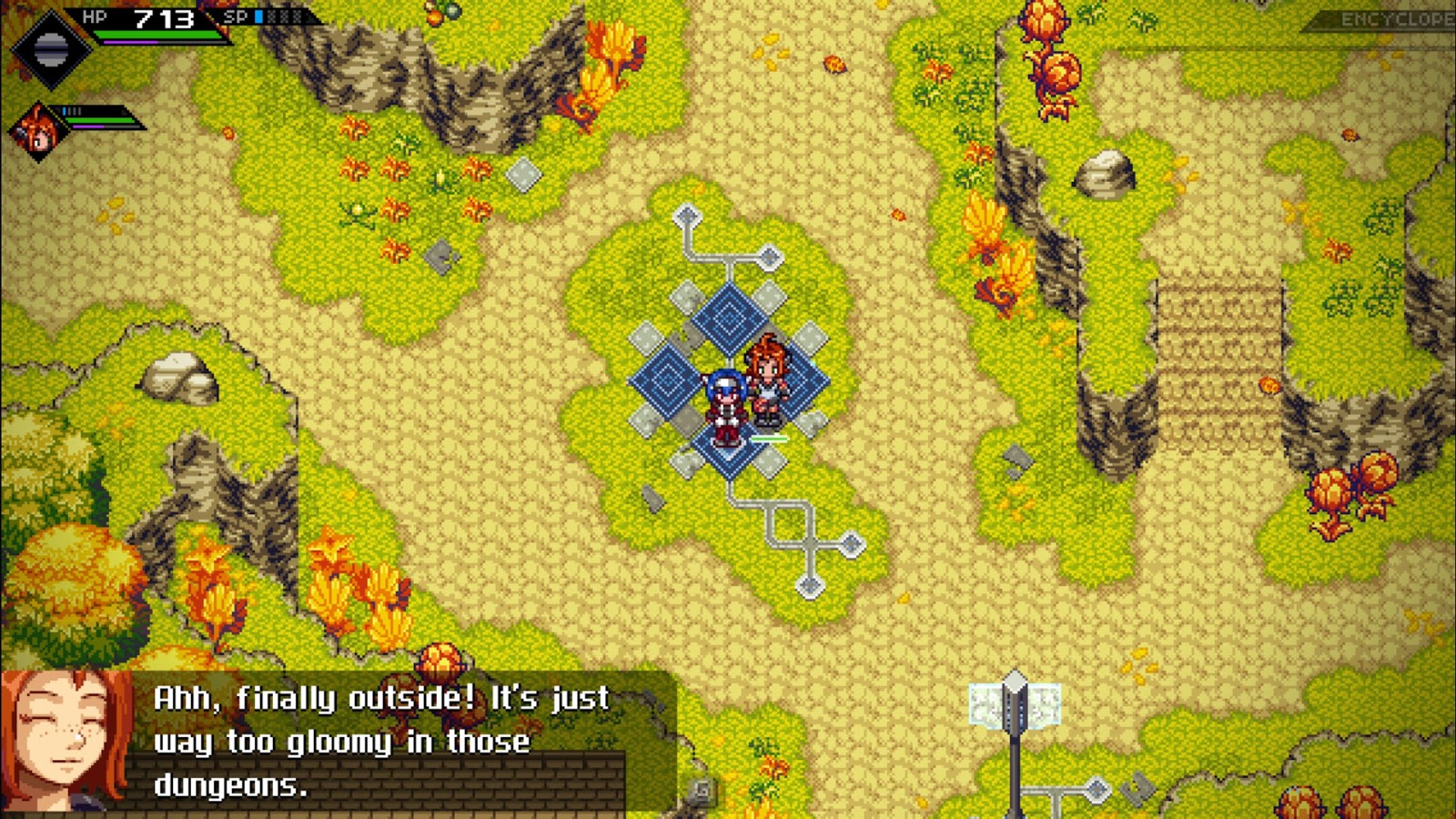 This is honestly just the tip of the iceberg. These systems play a role in the overall but the true performance goes into how the world is put together. Each “region” is seperated up into areas that are somewhat linear but often have pathways both in and out in which if you see something that you cannot get to? It’s because you need to keep going and then find your way back. The world isn’t flat either. Lea will be working with various elevations on her adventure hopping up and down hills and cliffs in order to get where she’s going.

While exploring this is where you’ll see enemies to fight, flora to smack in order to farm for materials and quests to pick up for a bit more experience and money. During these explorations though, Lea can hop from one surface over to another in order to make it further. This is done automatically but takes into account how fast she’s moving. Move to fast? You may overshoot and lose HP to the fall whether it be an abyss or just a pond as she is teleported back onto the last solid surface. It can take some time in order to properly gauge how fast you should move but once you do, the world becomes a lot easier to navigate!

These ideas carry through into dungeons that will make any fan of the Legend of Zelda feel right at home with puzzles to solve, keys to find and doors to unlock. Using both of Lea’s melee and ranged abilities is a must and often you may have to stop and think about something because it feels like it should be easy, but looks really hard, and turns out that it really was easy, but because of the design, you’ll be overthinking it and over complicating it. Battles are thrown into the mix to spice things up a bit before often stellar giant boss battles that are always a lot of fun. 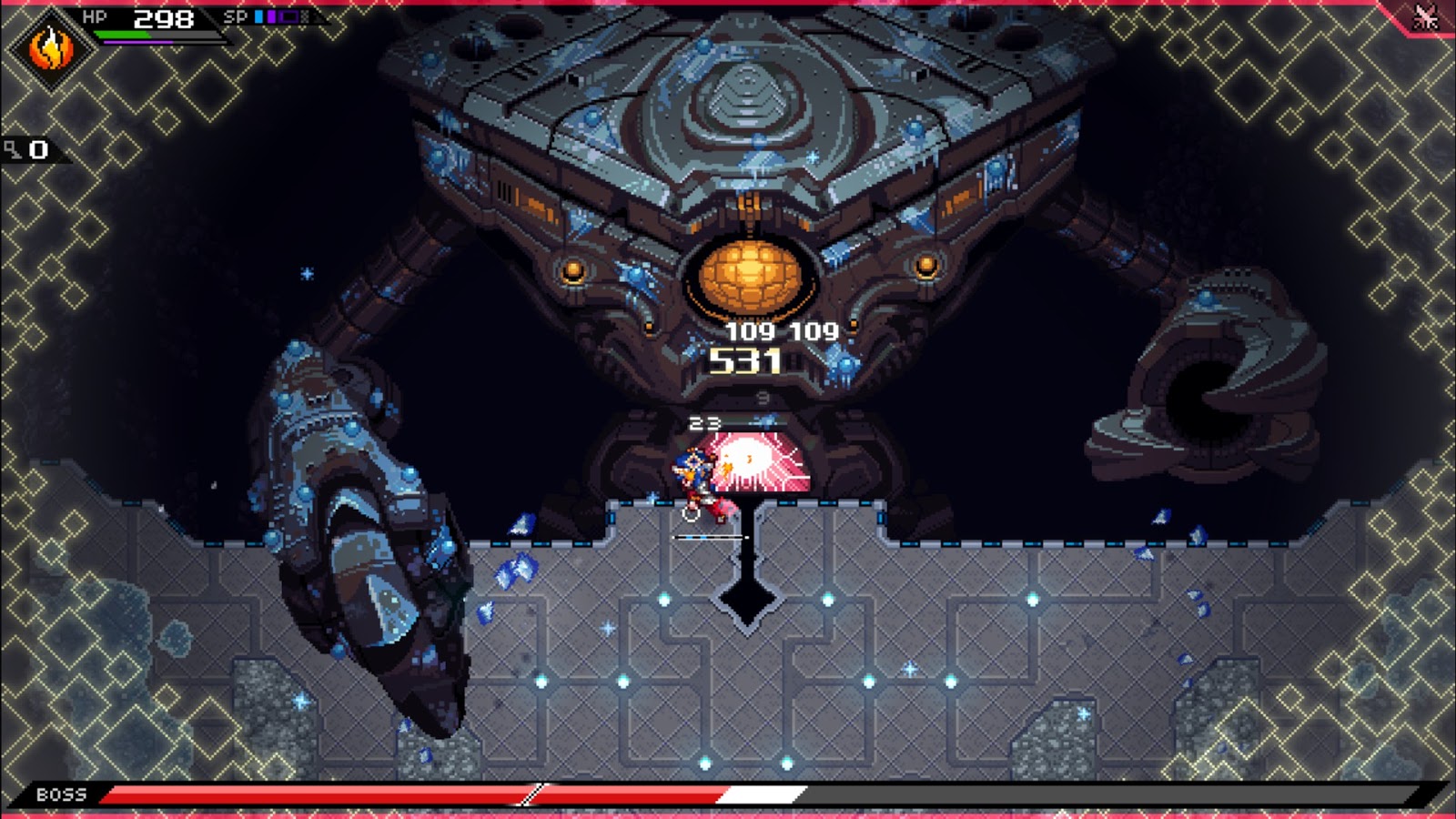 In regards to moving around the world though, CrossCode has a teleportations system that slowly unlocked as you move through and find points to teleport to. Basically your typical quick travel system to points of interest but the thing is that it’s fast. By the time that the short animation is over, you’re already in the next zone ready to move.

Throughout all of this though, and in the neat little details, is not only how fast that this is done, but that at the same time with monsters in the field, and petals or leaves floating around, other avatars are running around in parties or sitting around making the world feel alive. It makes it feel more than simply a bunch of landscapes to zoom through and in certain cases? Following these others could lead to figuring out how to get to a platform either to unlock a new area or to unlock one of these teleporters to make your future life easier.

Probably what I loved the most about CrossCode wasn’t that Lea is an amnesiac and that she’s exploring this virtual world brand newly, and for the “first time”, but it’s that her speech module is busted. So not only is she “damaged” because of some trauma, she also has other obstacles to get over and it’s through the people that she meets on this journey that allow her to grow and open up even with a limited vocabulary that is slowly expanded by being hard coded into her digital avatar. Because of this, the dialog is very well written and the 2D avatars are extremely expressive carrying over the character’s emotions whether they be sad, happy or reminiscing about the past through side dialog in the corner of the screen as you explore. It ties everything together, and it does it well without ever sacrificing another element to do so. 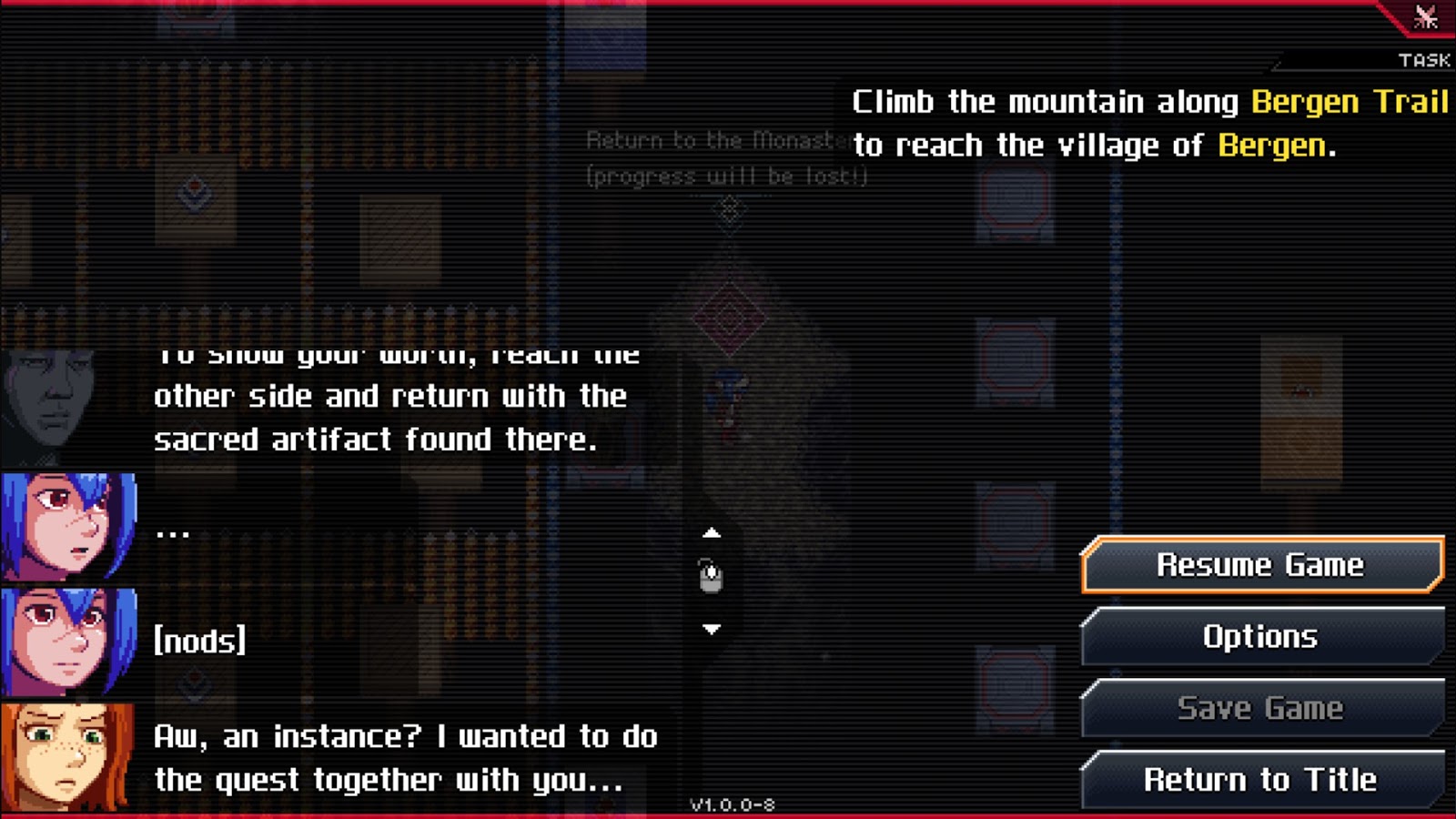 The last thing that I want to highlight are the nods to, everything. Avatar the Last Airbender and Sonic are two that I’ll mention in particular to not super spoil anything but there are hedgehog enemies that made me think Sonic. Then eventually if you explore enough you’ll encounter a blue one, that’s a boss with a giant HP bar and once defeated? You get a chili cheese dog. Hell yes! So on top of a stellar unique world, there’s also plenty of nods and pokes at other things to make the geek inside happy.

I’ve always been a huge fan of .Hack because it let me play an MMO in my solo single player style, offline, and, on my own time. CrossCode I feel has taken this a good notch higher and between the dialog, the dungeons, the exploration, the customizations, the puzzles and the visuals? It knocks it all out of the park for a hell of an experience that shows that the developers truly used their seven years to create something incredible.