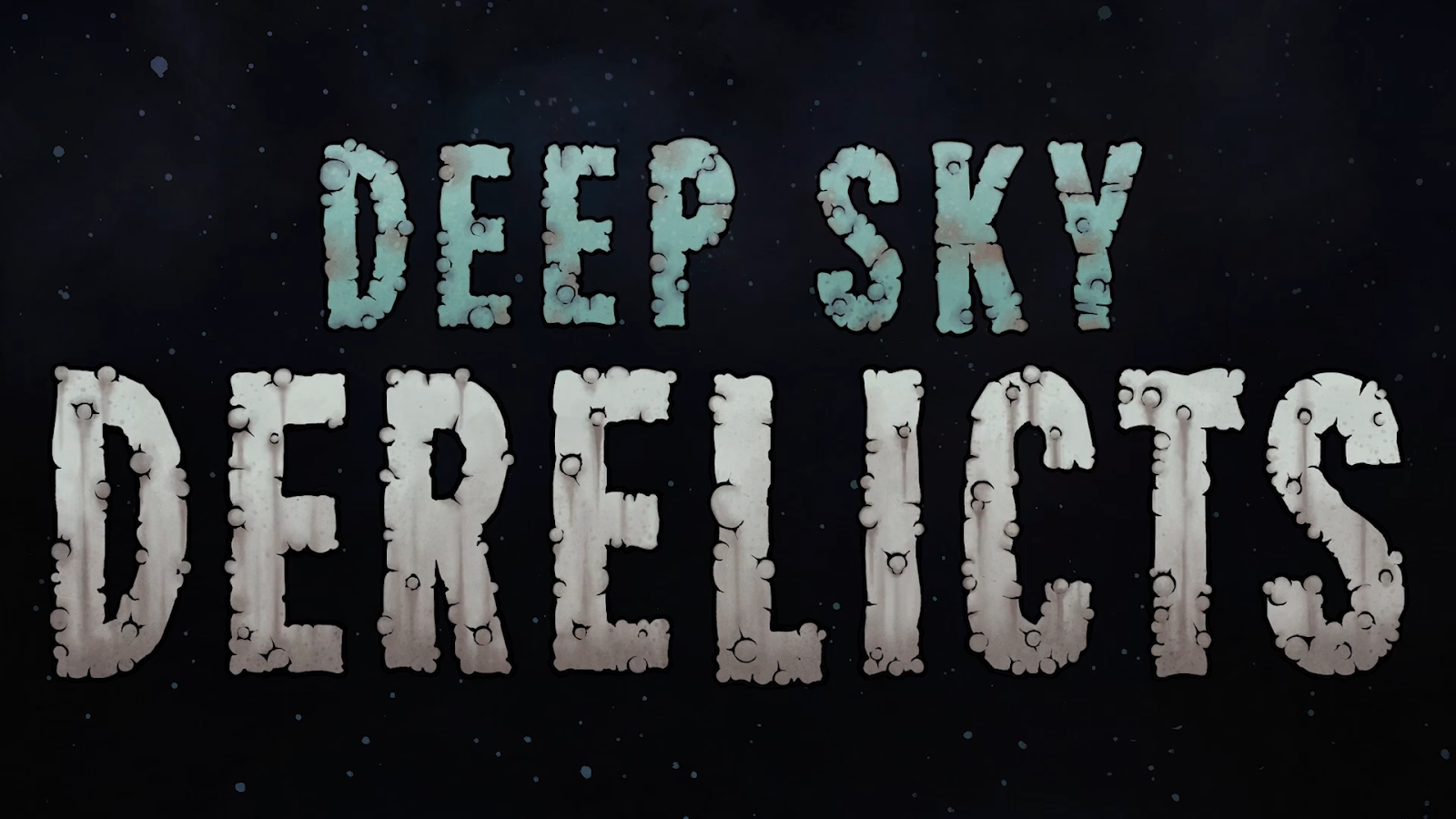 SPACE: THE SPINAL ENGINEER. Or wait, maybe that’s not quite right, but in Deep Sky Derelicts, it can be eerily accurate sometimes. Do you like space? How about mysterious alien creatures? Dystopian setting? How about yelling at RNGeesus to give you what you want/need? Well then, Deep Sky Derelicts may be what you need.

As a stateless outcast, you dream of living a better life in the “rich people area”, instead of vying for scraps. Lucky for you, you’re given an offer, a chance to make it into a life of luxury, all you need to do is find a fabled derelict alien spaceship. Sounds easy, right? Well, you don’t exactly have much of a clue where this alien ship is. As such, you need to go around investigating all the more local decrepit alien ships, hoping that they contain some clue to the location of the ship that you’re looking for. Thankfully, that just constitutes finding coordinates, but there are others looking for lost treasures aboard these vessels as well. Some are friendly, but most of them aren’t. It’s time to grab your customized team of fellow outcasts in order to fight your way through the derelict spaceships in order to earn your lunch ticket.

If you’ve ever played “Darkest Dungeon”, you’ll probably have a good feel for what you’re getting into, as well as the art style. You start the game off by choosing your three members that will venture across the cosmos, although more are hireable at the hub town. In the hub town, you can also purchase gear to outfit your crew, heal, buy and sell miscellaneous items, and accept or turn in requests. Once you’re all set to go, you head on out to the spaceship of your choosing. Once there, you can open your PDA to view a map of the area you’ve scanned/explored. You use this map to move through the ships. You have a few basic options, such as skip turn or scan area. Basically, scanning an area will show you what’s in the panels in your immediate vicinity, if anything is there at all. Enemy units will show up as red blocks on the map, and every “action” you take, they get one as well. If you come in contact with a hostile life form, battle will commence. 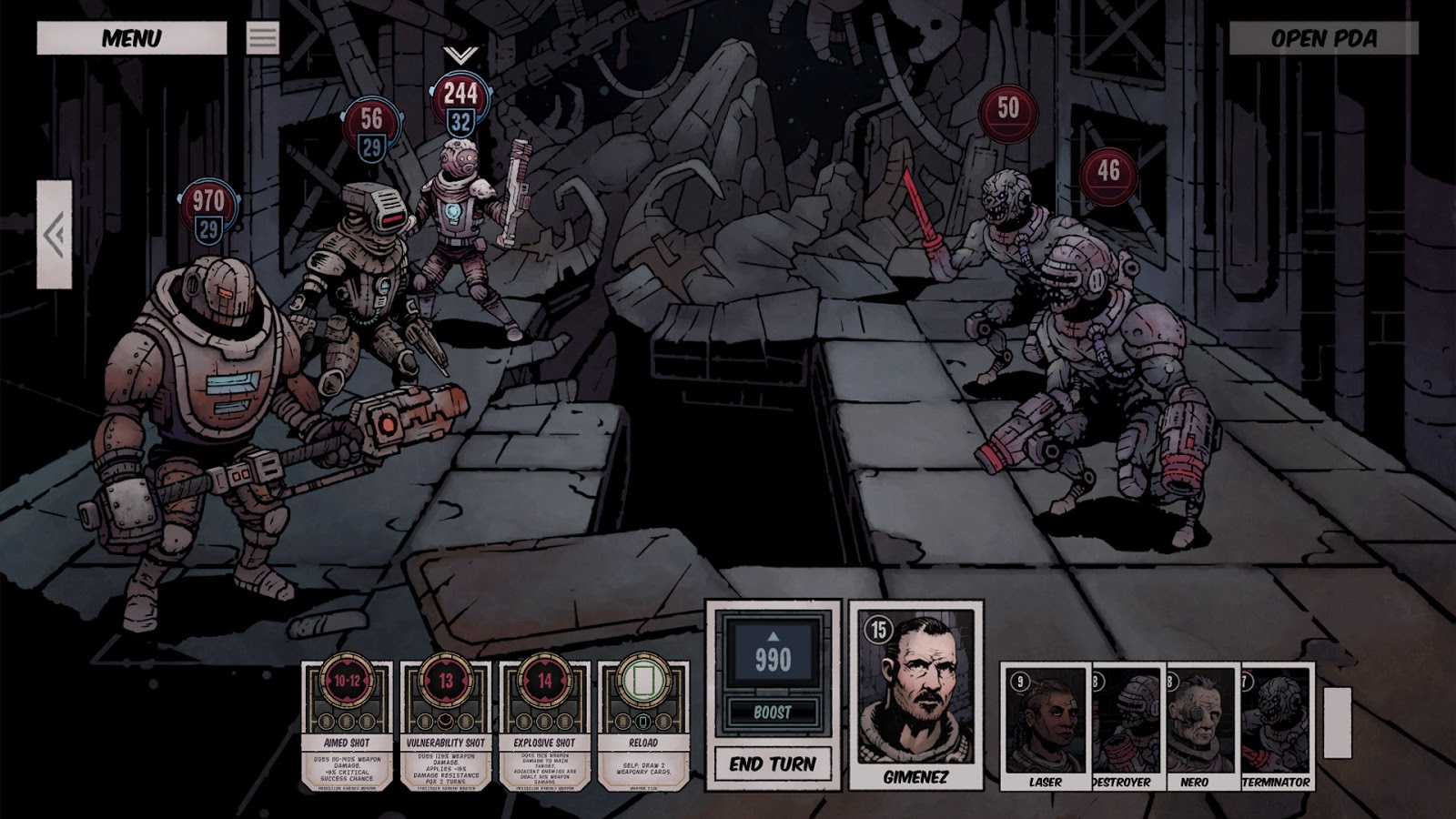 The battle system is an interesting mash up, where you and your opponents work on a turn system, with higher Initiative values taking faster and more frequent options. When your turn actually rolls around however, you have a series of cards to choose from, which will determine the action your character will take. These cards are based on your equipment and class, usually containing a buff/debuff, normal and gun based attack, as well as something “special” associated with your class. These cards are shown when equipping gear, and there are “multiples” of the cards, meaning that you could get a few of the same options on a turn, despite the fact that you have a default one action per turn.

Unfortunately, this also means you could get into a fight and only get buffs/shield regens, because RNGeesus can be a bit mean that way. On the plus side, that doesn’t really happen all that often. Units will generally have a shield value and a health value, the shield getting recharged after a battle, whereas health will remain the same until healed. Most battles don’t usually take too long, which is good, because you will consume energy every turn. You also need energy to move in the spaceship, as well as scan the area. I think you can see where I’m heading with this. Essentially, energy is your defining factor while exploring a ship, with multiple possible landing zones that you can go to and from after discovering them.

For the most part, the game is rather “basic”. You find a new spaceship, explore it, get new coordinates, rinse and repeat. Most of the fights don’t really require much strategy, at least at first anyway, and you can fairly easily get into certain tactics that you’ll more than likely be subbing out depending on whether the enemies you’re fighting happen to have shields, or whether they are organic or robotic in nature. While nothing is done wrong, per se, I found a distinct lack of drive presented to really explore the spaceships you visit, and I’m the sort of person that has to 100% explore a map, so you know it’s getting bad when I stop exploring the ships and the map isn’t fully fleshed out. 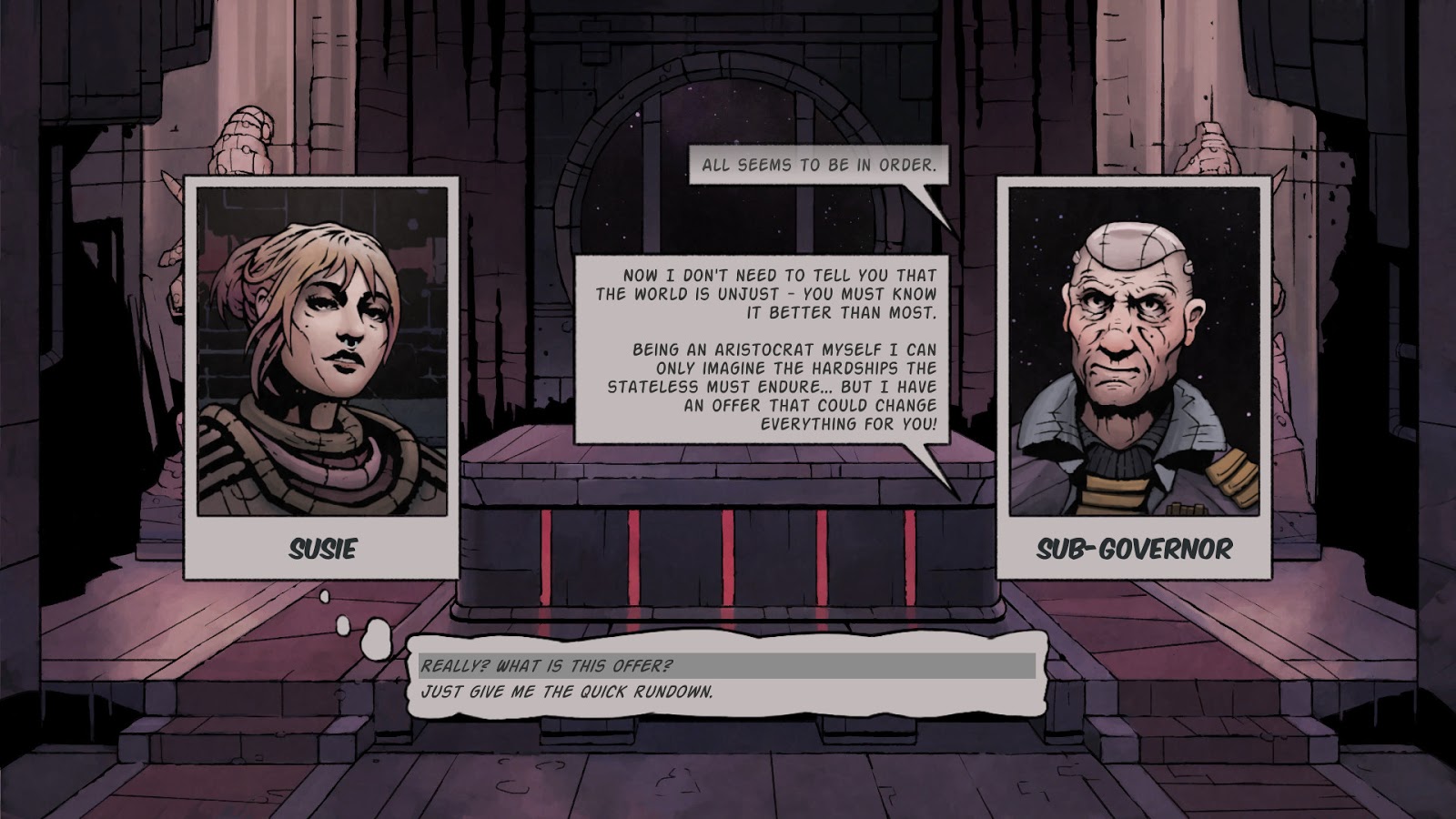 That being said, the combat is smooth, although it can be largely non-existent depending on how things go. I spent a greater deal of time than I would like to admit trying and failing to actually get into a fight so I could get some drops I needed for a side quest. The graphics are pretty good, looking like something you’d see taken out of an old gritty comic book, the music is ok, if not a little bland, and the deck building aspect is pretty neat.

Deep Sky Derelicts sits in a really odd place for me, as I can’t really say it’s either good or bad, or even just “meh”. There was a lot I liked, such as the way they handled the deck building, but there was also a lot I hated, like the awful and unintuitive user interface. The pacing can be really slow, especially during the exposition segments or ship exploration if there aren’t any enemies, but picks back up again if you have a lot of events or combat in a ship. The energy consumption is generally negligible, moreso feels to be there to keep you from ending up with a massive horde of cash, since you now need to go and pay to recharge your energy in-game. The battles alternate between clunky and tedious, to fun and interesting.

Essentially, Deep Sky Derelicts suffers from what is essentially a pacing whiplash, alternating between being rather bland and being rather addicting. If anything, I’d suggest trying to get some more variety in battles, whether that be on your own part or from the devs, and increasing the encounter rate, or at least providing an option to adjust it, to help make the game not feel like a purely exploration game instead of a turn-based strategy style. While certainly not for everyone, it does have the draw for those who enjoy turn-based, strategy, and deckbuilding style games. Those coming from Darkest Dungeon would also probably find Deep Sky Derelicts a good next step in their game list.