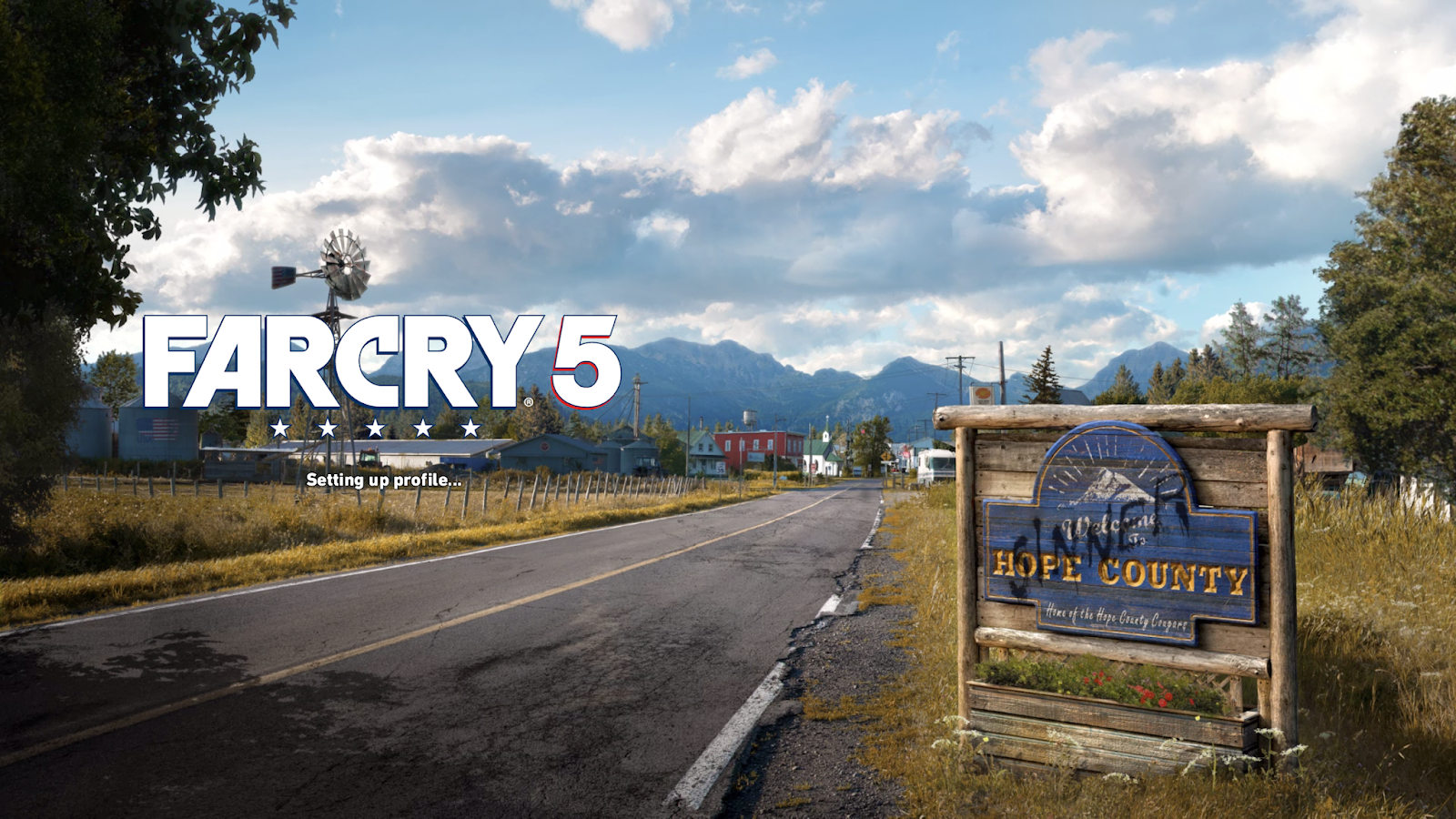 The Far Cry series is not one to shy away from controversial-ness. While I may have missed the news about the first and the second, I heard plenty about three, four, the praise for the change of direction of Primal, and the sheer apparent outrage at five as it happens on “US Soil” instead of somewhere else in the world. I’ll be honest on two things. The first? This is my very first Far Cry with the most of me having seen comes from Breanna playing through Primal which looked fantastic. The second? Far Cry 5 is terrifying because of the issue it decided to portray.

Now I’m not saying that the others weren’t as terrifying, I have no idea as I know only of the base premise. The reason that I found the fifth to be scary is because of two reasons that boil into a third. The first is that it’s no secret that there are a fair amount of people with guns and groups of people with guns that feel that it’s their right to gather together regardless of what side of the law they are on within North America. It can happen in Canada as well. The second is that religion is a scary thing especially when it becomes more of a cult that will hunt down anyone that doesn’t see things their way. See the Crusades. Add the two together and the stage is set for our protagonist, you, a Deputy US Marshall sent into this mess in order to arrest the leader Joseph. The reason for this truly being terrifying? There’s no way to reason with these people. It’s their way or death. They truly believe that they are right and will bring their zealotry “righteous” fury down upon you and anyone that stands against them and the sheer conviction that is portrayed is terrifying. Now I ended up playing Far Cry 5 all by accident. I had a chance elsewhere that I could have picked up but the timing was off. So one night, leaving a friend’s place, I saw the case and asked how she found it. She said her and her boyfriend had played through it and he was close to the platinum but he would get back to it later because he ran out of people to chase after for takedowns. Asking me if I wanted to borrow it since they have my World of Final Fantasy, I said why not?

I was not, at any point from the beginning to the end of me playing, disappointed. I even went as far to pick up Far Cry 4 and before buying Far Cry 3, found out that the season pass of 5 would include the campaign of Far Cry 3. So I did what anyone would do, bought the Gold Edition of Far Cry 5 on an Amazon sale. Now I have 3-4-5-Primal and Blood Dragon through PS+. Good things come to those that wait I suppose. There’s also a lot of Far Cry in my future.

So starting off with how real everything felt, the rest of the thrillride was enhanced all the way until the prologue was finished and that you were in the safe hands of your rescuer. Safely tucked away into a bunker, you are given a few tasks in order to get the lay of the land before heading out and taking out your target’s three lieutenants which each control a third of the county. Each of these three is scary in their own rights, but at the same time, while certain objectives may remain the same with the need to remove the cult, each is in a different physical type of terrain, and, the mentality of their followers makes each unique and just as interesting to go through. Add in civilians that need saving, private stashes to be unlocked and looted along with special NPCs to join up with you, Far Cry 5 is a hell of a ride from start to finish. So after the beginning and the thrill ride that acts as the introduction, and more or less as the tutorial, the world opens up in a much calmer manner. Now without having to worry about running and gunning, you can start to take your time to appreciate the environment and everything found therein as you can start moving at your own pace. This county, that for all intents and purposes is your world, is massive! Roads that lead from towns, to quarries, to farms, to hills, lakes, rivers and an airfield, are all represented on a scale that leads you to believe that you are there. Now while you can take a car or a truck and run it offroad, you’re more apt to make it there better with a 4×4 or a Jeep that can handle the roughness of the terrain. You’ll be doing a lot of travelling so mapping things out and unlocking quick travel points is a must. Just keep in mind that auto-driving while being much slower than doing it yourself, is safer as there’s less chances of wiping out or hitting things.

This will eventually change over time once you get access to helicopters, planes and the ability to jump from aircrafts (quick travel) and use a wingsuit. Being able to essentially base jump makes travelling so much easier but it does come with a catch. Quick travel points are not unlocked if you fly over them, you either have to drive to, or walk to them, as being in the air does not count. By this point however the adventure is either halfway done or near completion as you move through your skill tree unlocking whatever you really have left by this point.

RPG skill trees in an FPS are always interesting as they don’t always add a depth that could be needed or wanted. In this case, there are some skills that may be useful to some but useless to others. The list includes the likes of extra ammo, more health, parachutes and a wingsuit (that I clearly should have unlocked as fast as possible) along with enhancers for your unique NPCs. Skills, or feats in this case, can also be obtained in order to perform basic and advanced takedowns not only saving you ammo, but also a lot of time as they essentially take your enemy out in one solid hit. As no one expects you to take the county back on your own, there are NPCs ready to join the fight to take back their homes from the Seeds. Now while you can go about the countryside picking just about anyone up, and while they can level, there are unique NPCs that once obtained cannot be dismissed and even further than that? They are better than your average bear. I’m not kidding either, bears are vicious but why would you want a regular one when you can save and take Cheeseburger along with you? Super cuddly and sadly diabetic because they fed her too many cheeseburgers, he’ll be the best tank you never knew you needed essentially only leaving one open spot for someone else.

What was great about the unique NPCs is that there’s one of each. A gun wielder, a shotgun user, a rocket launching specialist, a helicopter pilot, a biplane jockey, a dog, a cougar (litteral one), a sniper, a flamethrower (aka BBQ specialist) and the amazing Cheeseburger. I swear, once I found that sweet lump of fluff I was in love as he saved my ass more times than I can count. Learning how to use each one in different given situations is important as you clearly don’t want someone to be launching rockets in an enclosed space. The same can be said with the flamethrower just as you wouldn’t want your sniper in close quarters 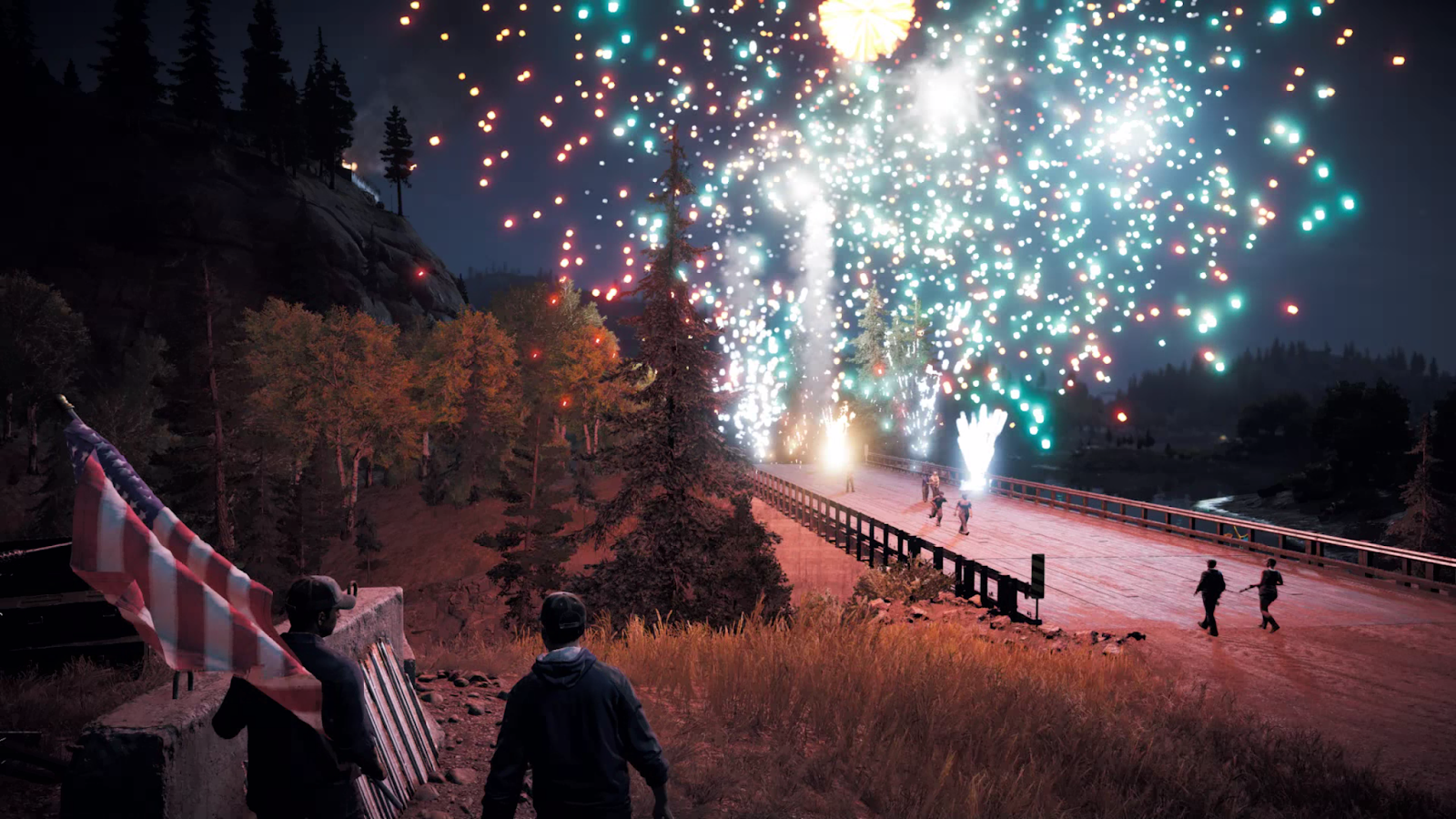 Once you’ve gone through all three areas and have taken out the major bosses, it’s time to face off against Joseph once and for all. As this is still fairly new I’ll leave spoilers out but there are some elements that border on almost magic in this realistic world so it was interesting how they played on these elements through two of the four fights. Making me think a little bit of Metal Gear Solid at one point, I had no complaints.

For my first Far Cry? I think I’m hooked on the series. Next up I’ll be diving into one of the three expansions that have been released. There’s Vietnam which interests me the least, Mars which has my attention and Zombies. Freaking Zombies. That’s probably where I’ll start. Like Far Cry 3’s Blood Dragon, these expansions are stand alones so you don’t need to worry about the core game being done to dive into them. Well done Ubisoft!