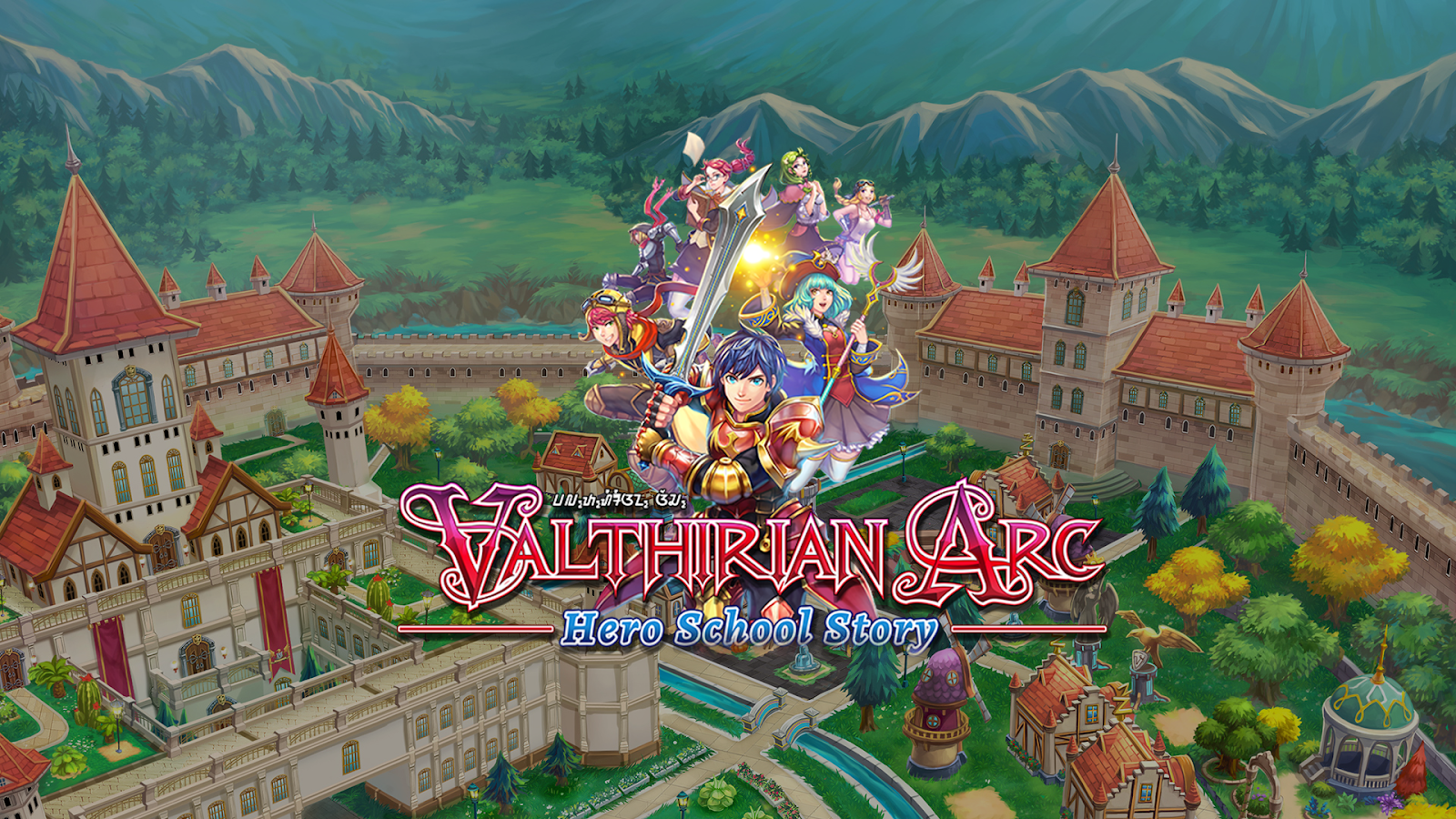 My first thought about this game was “Am I playing some strange version of Harry Potter?” But I was surprisingly wrong. Valthirian Arc: Hero School Story is a simulation  action-adventure story game that allows you to become the principal of a school to manage and build the land into the proper academy. Developed by a small company called Agate, this PC only title has now made its way to our home consoles the PS4 and the Switch.

The story opens up to the Kingdom of Vathiria celebrating the retirement of the schools old principal and has tasked you to take on this new endearing role. With the help of the remaining staff it’s up to you to shape the future for new Heroes. But be wary of the allied nations as they could be your greatest assets or your worst enemies.

You’ll begin with a handful of students that you must train to become heroes. Either through taking lessons or sending them out on quests, it’s your job to upgrade them into top level students or by evolving them into a job class. There are three job classes in total that you can choose from: Warrior, Mage, or Ranger class. With each experience and level your students get they can power up certain skills and abilities to aid them in battle or that nasty final exam. If you max out their job level before the end of the school year they can be upgraded a second time to their ultimate job class form; Paladin, Scholar, Harlequin and more! 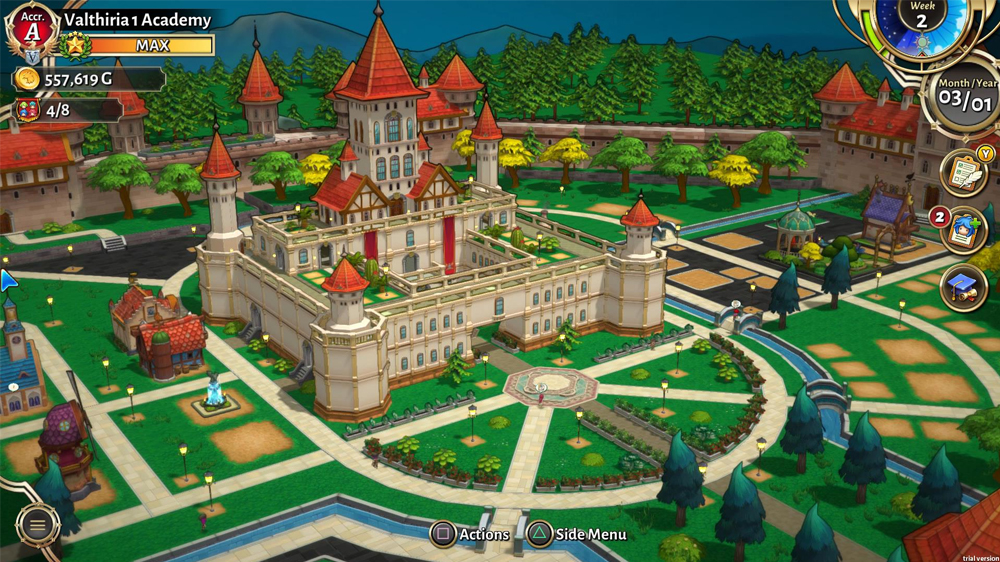 Sending your Heroes out on quests and missions is another great aspect to this game. It allows you to play through the dungeons to increase your party level and experience. It’s also a great resource for gathering material that will help you in evolving your kingdom and/or battle equipment. As you choose to participate in these events each one is slightly different, but will always end in rewards (as long as you don’t K.O. your party or run from the battle). There are tasks known as ‘Quest’ which allows you to explore the dungeons or ‘Errands’ that allows you to send a team party to leave the school grounds and aid this request, but it’s an off screen adventure that doesn’t require you to physically be with the party. They will return once their mission is finish, but you will not be able to interact with those heroes until they return.

Leveling up your academy is also a must along side strengthening your students to become heroes. You’ll need to earn points through your students in order to upgrade your school. The more you expand your academy the more students will join. You gain most of your points by either finishing daily assignments that is tasked to only the principal of the school to complete at your own pace, completing missions or graduating students at the end of their term. By evolving you gain a larger reputation throughout the kingdom. 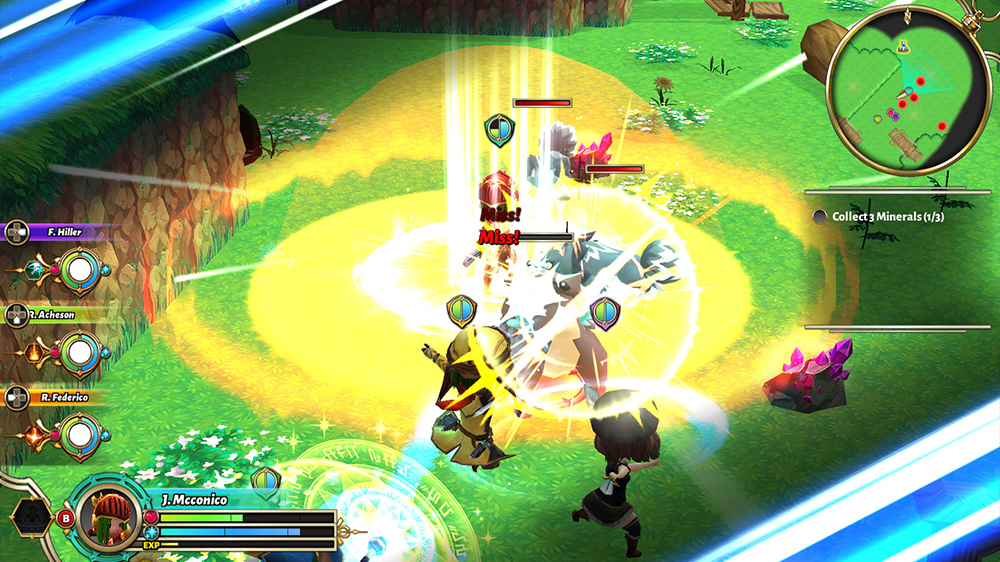 Crafting is also available to you while you are on school property. You may visit the blacksmith to enhance, create or upgrade weapons, spells or charms. By collecting the required material and currency you can power your heroes up. Note that any item you attach to a hero will automatically return to your inventory after that student has graduated.

Remember what I said about the other nations? Depending on who you help out will determine some of the endings you get in the game. Multiple ending means multiple play through possibilities.

My final thoughts on the game is that it was surprisingly fun. Its spriteful design is bright and colorful to match its flavorful school life simulation. The only negative feed back that I would have to say is that the dungeons become pretty repetitive. They would have the same look to most of them with slight variations to the environment. It was kinda… Plain? But in the end Valthirian Arc: Hero School Story  was a 8 out of 10 for being totally entertaining.