Zombie Zone’s cover explains everything you need to know about it: a young woman with a peculiar dress code, a sword and zombies. Although I am not a fan of zombie movies, I found this shallow, low budget hack and slash game entertaining.

*Note to readers from Editor: Zombie Zone is the very first Onechanbara. Back from 2015, here is our review of the latest in the series, Onechanbara Z2: Chaos* 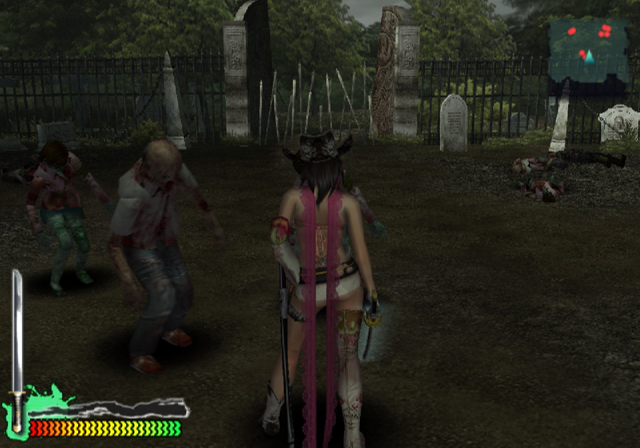 A witch casts a spell that will resurrect her dead mother but also turns everyone in the vicinity into a zombie. Strangely, the authorities do nothing about it, maybe because they rely entirely on Aya: the witch’s older, sword-wielding, cowboy hat-wearing sister. In case you expected deep family drama you will be disappointed though; the story is just an excuse to get your sword and start massacring dozens of lumbering, flesh eating monstrosities.

Wander in a large city where everyone, including the police, has become undead, slash the undead, collect pick-ups, go to the exit, repeat. Every stage consists of areas that are blocked once you enter and to get out you must kill a number of zombies. In addition, there are locked rooms and the key is carried by a zombie somewhere else. There is a tactical element though, since the main character has a flaw: if she slaughters too many monsters her “bloodlust” meter is filled and she becomes berserk; in this condition her attacks are stronger but she also loses health continuously. To return to normal Aya must pray in front of an angel statue (there is one in every stage) or consume a small angel statue, provided she has one in her inventory, or, simply, complete the current stage. As a result, sometimes you must avoid battles and other times you have to fill the bloodlust meter to progress, since some zombies can only be exterminated while you are in berserk mode. 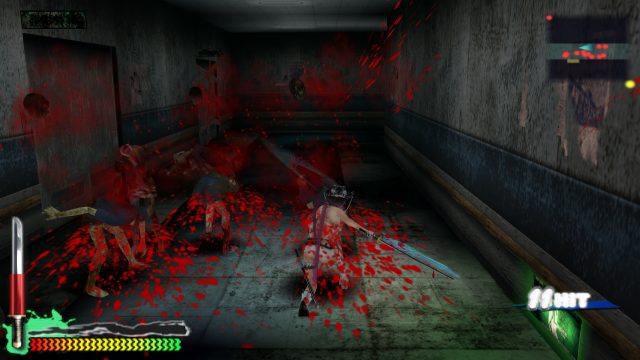 Other pick-ups refill lost health, make you stronger or grant invulnerability. Since you can replay stages you may collect these items repeatedly, however, you are not allowed to carry as many as you like: there is an upper limit, as in “Castlevania”. Thus, it is better to save them for boss battles.

Another interesting aspect is the upgrade system; when you complete a stage you are awarded with points based on your performance: time spent, health lost, number of orbs collected (orbs are left by destroyed zombies). Points are then spent to raises attributes: attack strength, speed, combo length, maximum health and a “mystery” attribute that is activated only if you raise it to the max. I chose to increase my attack strength, making battles considerably easier. 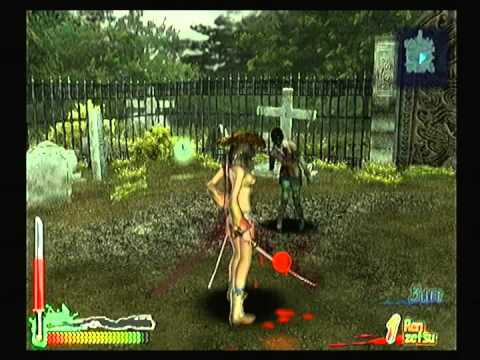 The graphics are, sadly, the worst I have seen on PS2, after “Underworld”. There are objects that appear to be 3d from a distance but when you get close to them you discover they are, in fact, badly drawn 2d paintings! The level design is repetitive and unnecessary complex at times (you will need to draw a map for the second and third stages, which take place in a maze-like hospital full of zombie-nurses), the scenery is poor and even the floor is not designed correctly: some buildings are partially submerged in the ground, making you wonder how their former residents were able to get in them!

On the other hand, Aya looks great and her animation is fantastic. Her cool appearance and swift moves, mixed with abundant blood that spurts in the air, appropriate sound effects and mindless music made the experience of cutting infinite zombies into pieces enjoyable.

The controls are precise and practical. Though there is only one button for slashing, you can link combos together and perform extra moves with “R1” (as in “The Red Star”). Generally, you fight large groups of monsters that respawn once you revisit a room, street or cave. Your attacks hurt multiple targets and deal adequate damage (except for the kick, which is used to clear the way without filling your bloodlust meter). A devastating move is the air slash, which has an impressive area of effect. Generally, I loved how a seemingly frail girl confronted armies of zombies and destroyed them quickly, leaving bloodstains everywhere.

Zombie Zone has only six stages and if you spend some time replaying them to upgrade you should not have a problem finishing it. The ending is disappointing but, thankfully, I expected nothing better. To be frank, I cannot recommend the game to anyone, since it is of low quality and short. Nevertheless, I consider it one of my guilty pleasures.