You are reading
Book of Demons – PC Review

The Book of Demons has been on my radar for quite some time now. The issue with this though is that when you’ve been looking at something for so long, you start to have certain expectations. Is the experience really going to hold up? Should you take a step back and put the title from your mind a for a while? All valid concerns, however, the second that I opened this famed book the hours went by and any worries that I may have had with expectations were nothing more than would have been footnotes.

The Book of Demons in one word is fantastic. Designed with cardboard like visuals, this Hack & Slash adventure is not only the best damned homage to the original Diablo, but probably better than the current series itself. Yes, like Victor Vran in its more adventure and wall jumping styled Hack & Slash, Book of Demons does something different with the very familiar style and it does it so well that had I started it before my 2018 Game of the Year entries, it would have been on that list.

Currently having a total of three classes in which you are forced to use the Fighter until level five before unlocking the Rogue and the Wizard, each of these warriors will have their own “unique” opportunities to crawl through the crazy amount of dungeon floors. The reason for the experiences being “unique” is that there is no shared stash between the various characters. Each character must venture alone on either Easy, Normal or Hardcore which means one death and they are permanently dead. What is interesting however is that there are leaderboards for every category including characters that have yet to die even on normal mode. 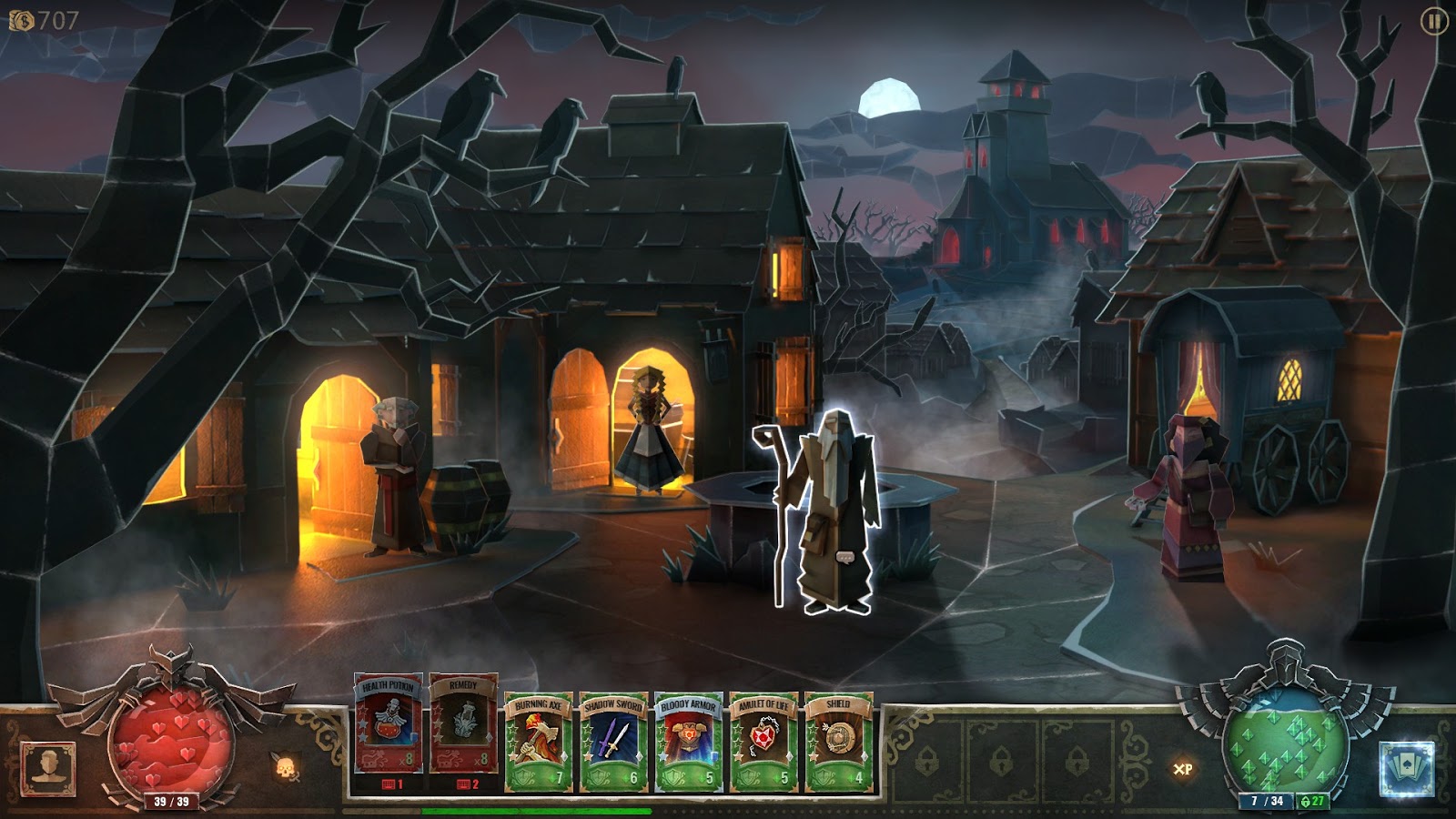 Once you’ve gotten the introductions out of the way in which you’ve talked to the local Barmaid and Deckard Cain, errrrr, the wizened old scholar, it’s time to march your way over to the cathedral on the hill and start to climb your way down through hordes of skeletons, zombies, goats, spiders and other random crazy mid-boss and main boss monsters such as The Butcher, errrr, Monster Chef.

While Book of Demons’ visuals differentiate it from the rest because of its more unique style, it’s really the gameplay that takes this now over twenty year old experience and makes it fresh. Instead of being given a massive floor with massive rooms to walk through, you are given massive floors with pathways to follow. Almost like being on rails. But this only applies to you as every enemy can move wherever they want to. This formula creates a crazy blend of elements as you constantly have to worry about where enemies are as well as where your pathway will be leading you.

Because of the pathwalking, as I’ll dub it, even the Fighter class has the ability to hit things from a range which felt a bit odd in the beginning but then became very natural. All three of your classes because of the gameplay mechanic will be “ranged” but of these, only the Rogue will be able to fire at things from incredible ranges and even into the darkness beyond her line of sight. Wizards by comparison will have their short ranged magic but once they cast spells they gain the ability to launch “X” number of a certain type of spell. Ten fireballs for example. Once these fireballs have all been cast, then it’s time to load up another ten or another spell type. 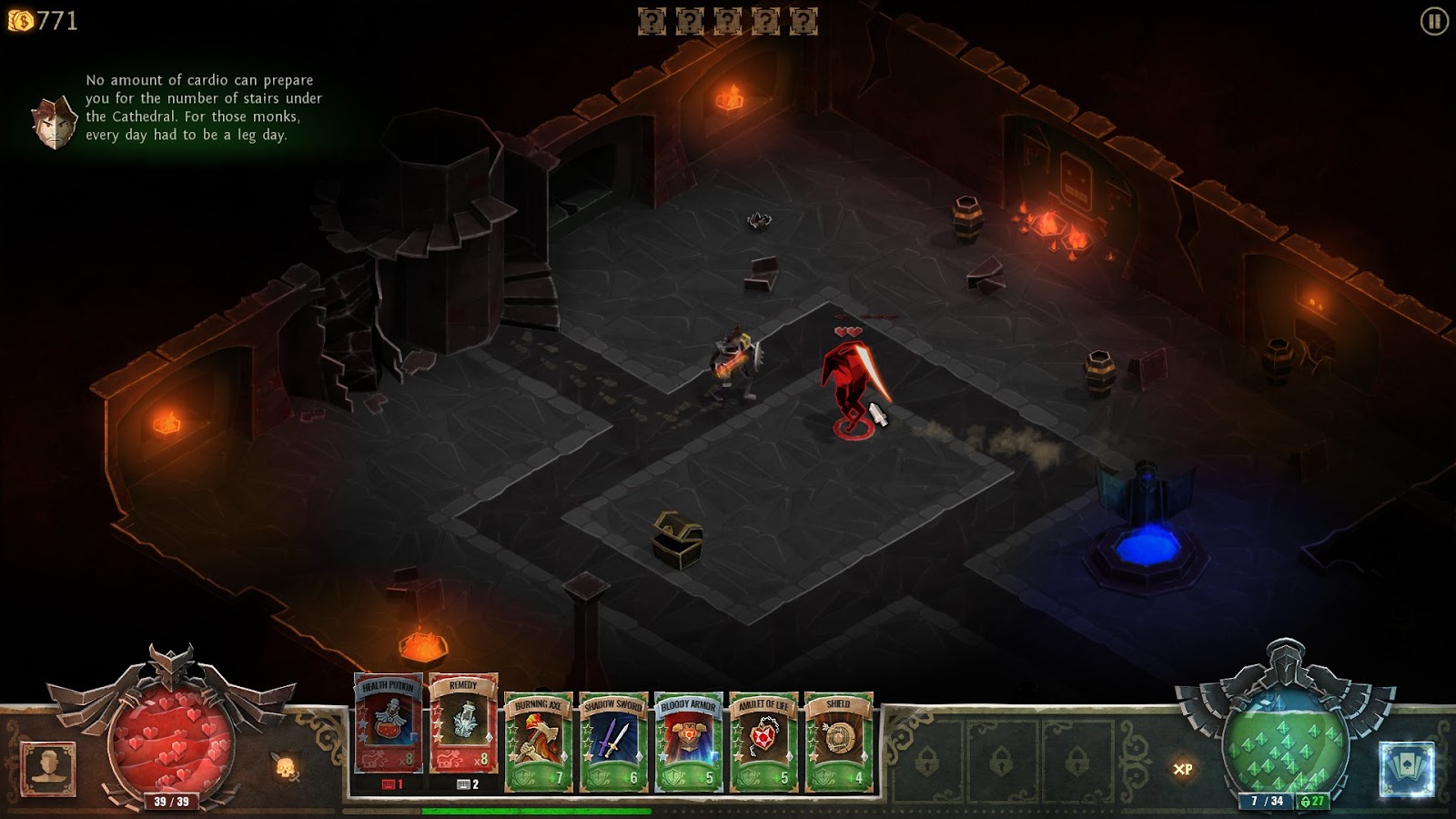 Moving from floor to floor, enemy types will start to differ and evolve in order to not only create a more diverse experience, but also to try to kill you in more than one way. Melee, ranged, magic, stampeding goat men and frost ghosts, you’ll also be dodging flying spears of various elemental damage, poison clouds and swarms of nuisance spiders. Each of these beings will grant you experience in which you can use to level up. Once you’ve leveled you get to choose whether you want to add one point into your health, for one, yes one, extra Hit Point or if you want to add it into your Mana. Health, self explanatory. Mana? Kind of the same thing however while it can be used in order to cast spells or abilities, it also functions as a resource pool for which equipment can be used. New fire axe that sets things aflame? It takes eight Mana to be equipped. This eight Mana is now blocked off from usage until it is unequipped.

Adding in another touch of complexity to the above however, is that items and equipment all come in the form of cards that have to be placed in your deck for exploration. Where do you get these cards? From Dungeon Crawling. How do you increase the amount of cards that can be equipped for Dungeon Crawling? Leveling up you say? Nope! That would be the wrong answer. Instead, in order to carry more cards, you’re going to need to amass one hell of a cash flow in order to pay for unlocking of these slots from the Wizened old guy back in town. You would think that while trying to save the world people would be out to help you for free? Nah, even here things run on capitalism.

As you move through the floors of the dungeon and begin facing more and more powerful foes, you’ll need better equipment. As equipment comes in cards, and the cards require a large enough mana pool in order to support them being equipped, one of my first thoughts was that some cards could be useless after a few floors. What do you do then? Thankfully just because you’ve picked up a card for either an armor which drops health when you’re hit or a potion that restores only twenty hearts when you’re up to forty plus, each card will have multiple upgrades that can be swapped between. Being able to swap instead of having to flat out replace or grumble that an upgraded version costs more and that you can no longer equip it was fantastic. 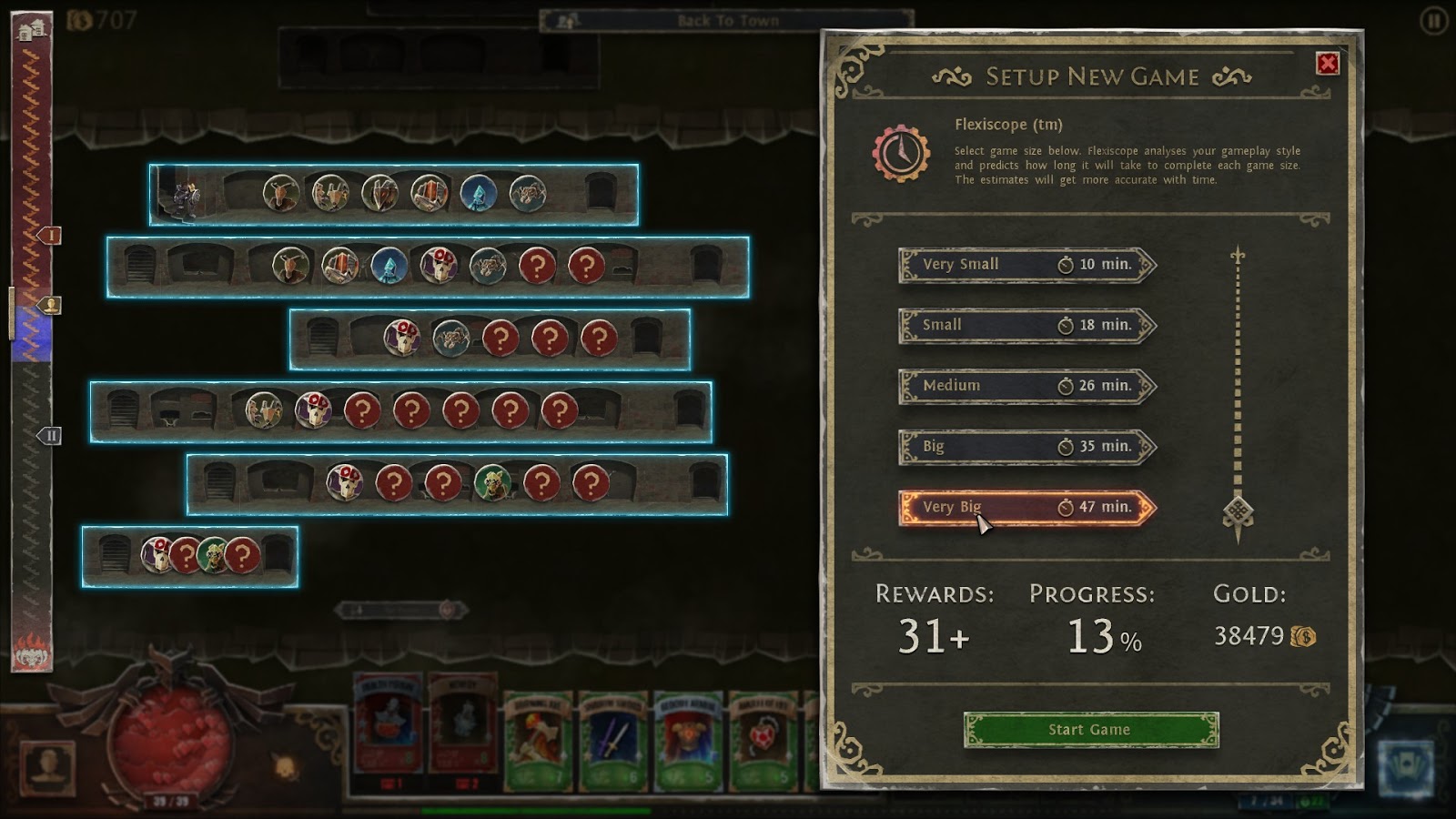 One feature that I truly appreciated is the option for how long you wanted to play. We get busy. Personal lives, work, unexpected circumstances, and because of that sometimes we have the time to sit down for hours at a time while others? I’ve got twenty minutes between getting home from work and going back out for chores and appointments. With this probably in mind, each run of Book of Demons can be set to be either short or super long and each one of these runs has an estimated loot and time calculator. This lets you know how much time something should take so if you’re not sure on your time, or if you’re honestly not sure if it’s a good idea to clear that many floors in one go, you don’t have to!

Finally, the one thing that some may notice if they load it up, or have followed information from the devs, is that Book of Demons is just the beginning. Loading up the game you’ll be presented with many different pedestals in which only one can currently be selected. The reason that only one can currently be selected is because only the Book of Demons has been released. Thing Trunk have put into place something that I could only WISH that some other developers would do and that is to have all of their next projects through the same interface even if they are a few years away.

I would honestly saw that if you are a fan of Diablo, Torchlight, Grim Dawn, Path of Exile, Victor Vran, The Incredible Adventures of Van Helsing, or any other number of Hack & Slash titles that have spawned from Blizzard's horror inspired Dungeon Crawler, Book of Demons is a must. Great gameplay, graphics, audio and plenty of jokes and tributes to go around, this Hack & Slash is worth it. With it also being the beginning, I'm looking forward to seeing what Thing Trunk come up with next.