Even now when I think of Warhammer 40,000, I still think of a tabletop game. The miniatures, the giant maps and the table(s) to support the battlefields. Sitting down to Mechanicus invoked that style of fondness for miniatures as you are never at the forefront. Instead, you sit above a digitized table as you tell your “minis” where to go as they dungeon crawl under time limits on a planet that is both waking up and trying to kill you.

Mechanicus took me by surprise. Now I might not be as harsh as Robert, but he isn’t wrong when he says that a lot of Warhammer titles aren’t as good as they should be. Turn based strategy? RPG elements? Dungeon crawling? Mechanicus has everything for a solid experience and I’m happy to say that Bulwark Studios delivers on it.

Beginning with a tutorial you are giving everything you need in order to attempt to survive this planet which is waking up and trying to kill you. Having essentially woken up a hive of Necron, your forces are now on a time limit for how much they can gather before needing to leave the system. Technology, tactical information, historical information, and relics. All of these are up for grabs but as to whether or not you’ll be able to acquire them? That’s up to hold bold you want to be. 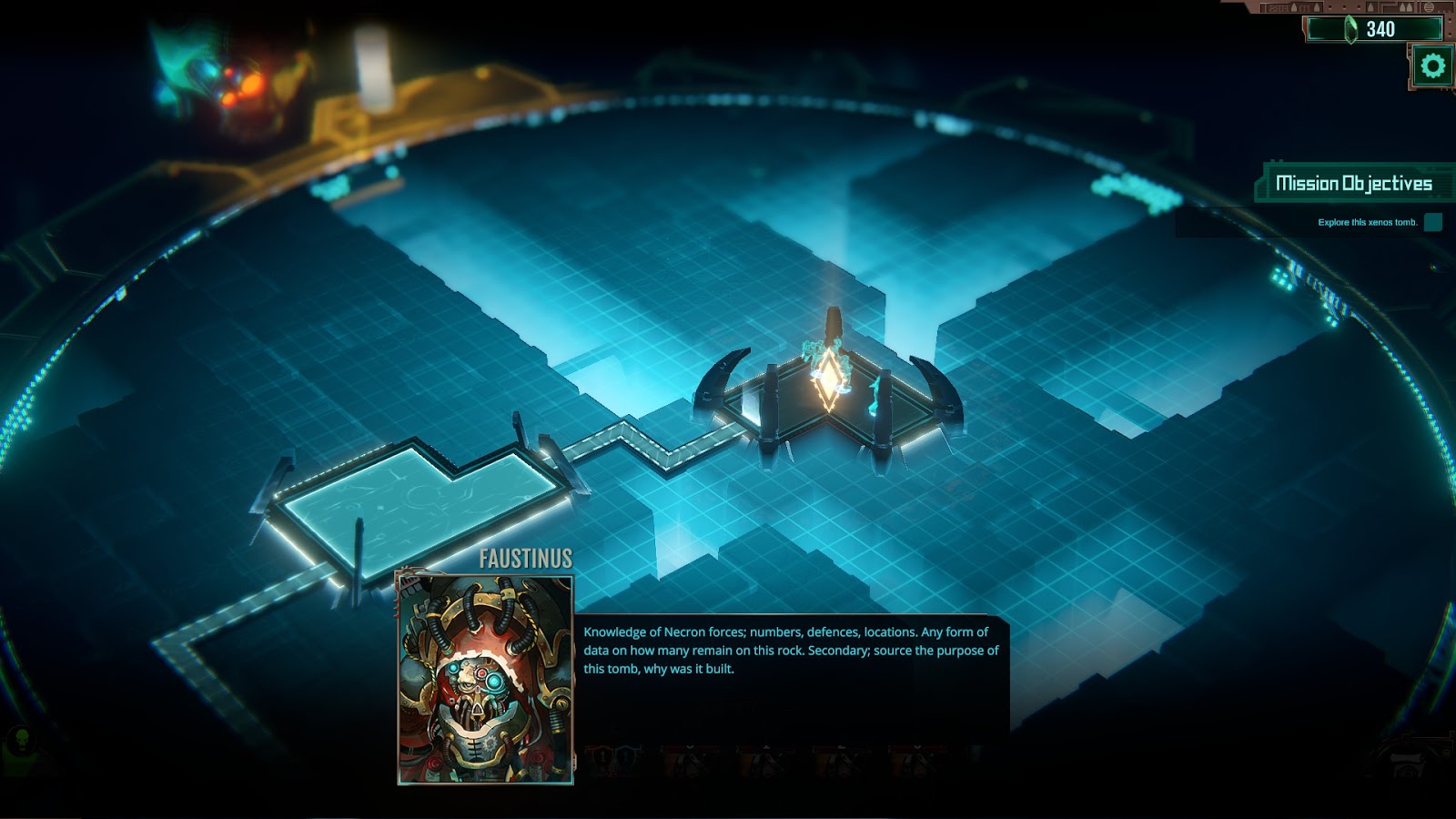 Starting off, gameplay comes in two flavors. The core of Mechanicus will have you sitting at the digital table with a layout of the stage that your forces are about to enter. At first I thought that it was a bit odd to showcase the entire layout and show which rooms lead to which through the lines that connected them. I mean isn’t the best part of exploring a dungeon to find out where things lead on your own? The answer to this question would generally be yes however, in this case? I’ll take knowing exactly how to go in and out in the fastest way possible even if I mean to explore every room.

The reason for the above is simple. The planet is waking up and you’re on a time limit. Alright that makes sense. Tying into that aspect, each location that you’re going to explore isn’t quite awake, not at the beginning. It’s through your explorations, your poking and your prodding that it wakes up and when it does? It tries to seriously kill you. By each location waking up, a meter will start to fill which will affect your foes in different ways. Clicking from zero to one will add extra enemies to your eventual fights. One to two could add the time that it takes for a Necron to resurrect itself in order to attack you again if you don’t put it fully out of its misery. This meter keeps on filling until you book it out of there after fulfilling your final objectives and each increment will also further add to the overall planet waking up.

Exploring the dungeons is a fair amount of fun as it’s basically a choose your own adventure. Do you do A? B? Or do you do C? Let’s be honest that like in real life sometimes all of the options suck. It happens but it’s what you do with the results that you are given that matter. One of your units fell down a hole while trying to excavate something. Do you blow the whole hole up? Do you hastily scramble to get your unit out? Or do you take your time in doing it all properly? C you said? The crypt that you are currently exploring just woke up and the meter just went from partially above zero to halfway through one. Enjoy more enemies when you run into them! 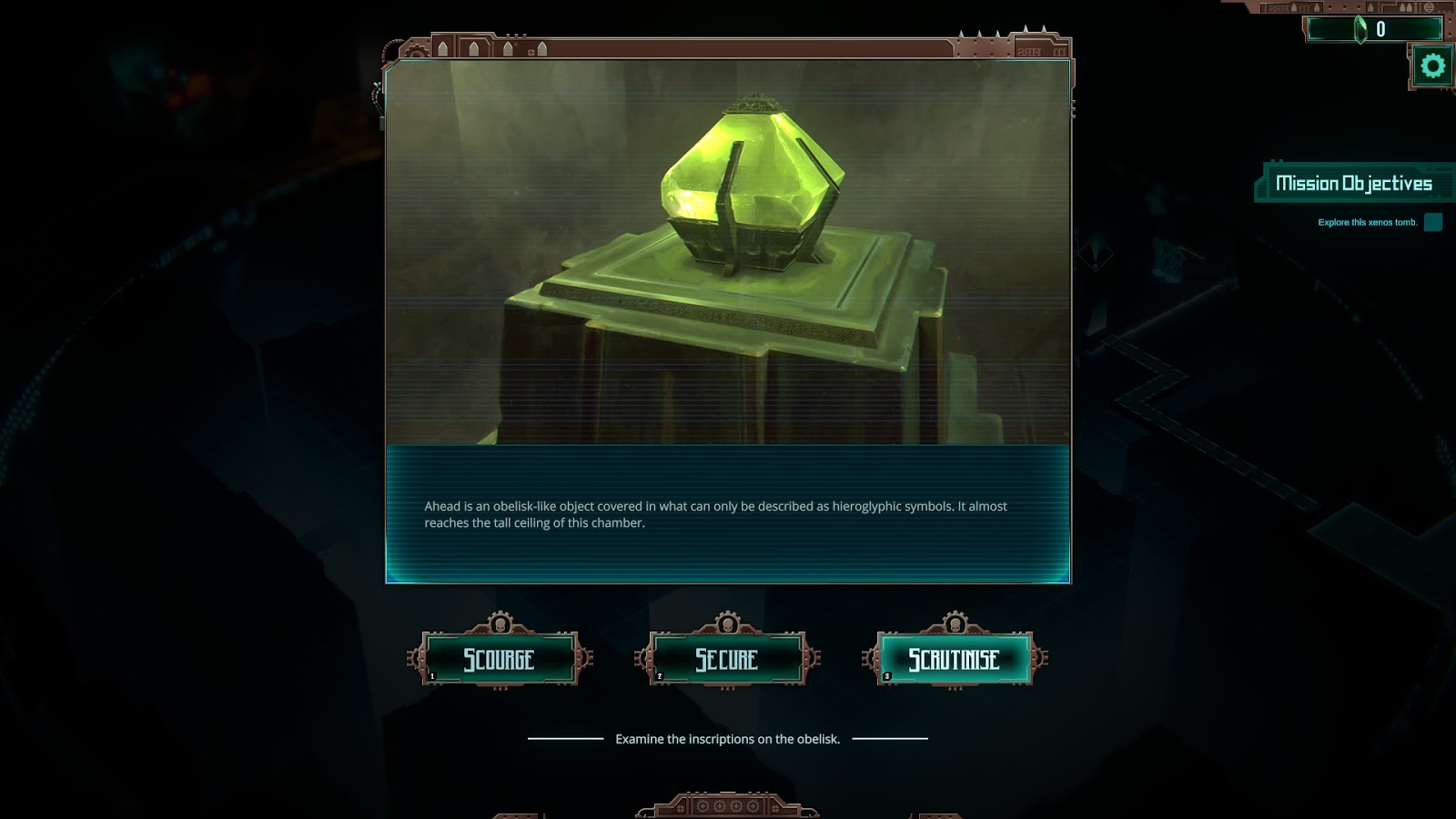 While exploration is fun, the combat system is even better. Acting a bit like you think it would as a turned based strategy, Mechanicus has a few tricks up its sleeves that made me both want more and question why some others in the style haven’t done the same. As a base rule, every unit can move, and every unit can attack. Base rule. Once you get to your priests though, this is where things get interesting as while the base rules apply, they can take combat a step higher through the use of accumulated Cognition Points (CP).

With the use of CP, priests can move past their normal allotted movement ranges in order to cover more distance. Now while that still sounds normal enough as others have allowed it, they can do this, multiple times. Hell, they can even use CP in order to move far enough to a spot that will allow then to obtain CP on the next turn phase if they are standing beside a CP generator. So not only do you need to calculate your moves for the next turn, you need to calculate your moves for the CP that you have on hand. Very handy when running away from something big and scary or moving towards another unit that needs healing or that can heal.

Unlike the movement though, weapons, also for priests, are a bit different and cannot use the same rinse and repeat tactics. Starting off with a simply melee weapon or a ranged one, once you attack, your weapon goes into cooldown mode. I thought this felt weird at first because it put a bit of a damper on battle as often you had to wait a whole extra turn to finish things off because a weapon was on cooldown. Also because your basic fodder was too far to deal the final blow. As the adventure moves on and your priests level up however, more slots unlock allowing for multiple ranged and melee attacks. The cooldowns make a lot of sense once you get to that point as otherwise the balance would have been utterly broken. 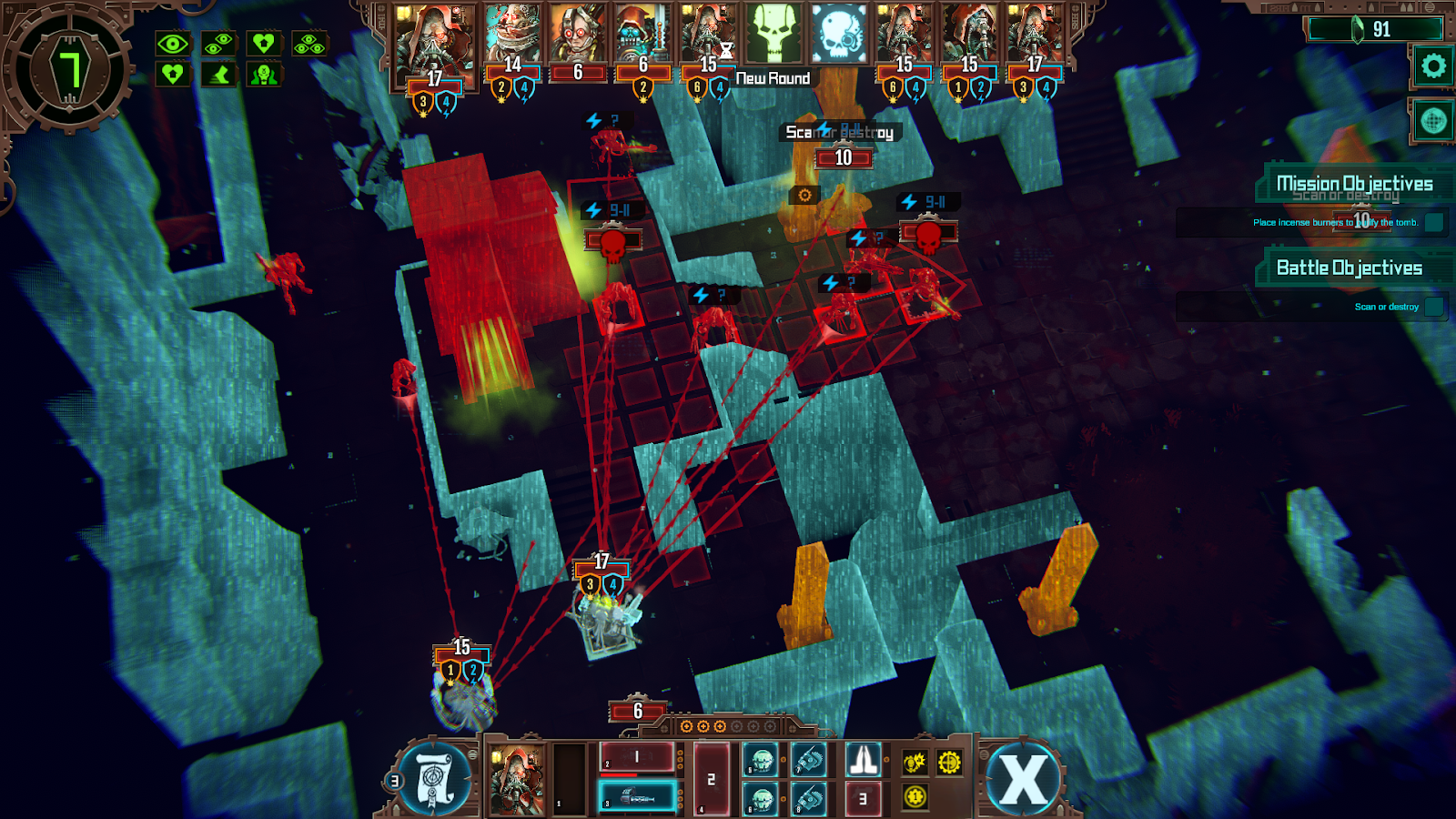 Your priests are not the only ones with tricks up their sleeves however. The Necron forces aren’t quite down and out for the count once you take out their hit points. Once a Necron drops to zero hit points, it goes into a recovery mode. This amount of time is dictated by the meter bonus that the enemy gets the longer that you stay in a mission or from the mess ups that your forces caused. While it’s down, CP can be gained from them before delivering the final blow that will take them out once and for all. You can let them get back up so that you can kill them again but why would you risk your own force’s lives?

Speaking of your forces, you’ll be starting the game off with two basic technopriests and one basic minion type in which you can have four of to basically be your meat shields as you start exploring the planet. More priests are to come and this is where Mechanicus shows its RPG elements. Unlike your basic fodder that can move around, hit things and take hits, your priests do everything they do and more. Flipping switches, downloading information from terminals and extracting CP from obelisks and other sources. They also have more hits and can be loaded out differently with the equipment that you pick up. Basically they are your RPG heroes and each can be as different or as identical as you want them to be.

While leveling up, your priests will have options to progress into various disciplines that will affect how they perform while sortied. What I really liked, and what you are essentially told in-game, is that these priests are versatile and can be customized as you see fit. Not being bound to one path allows for varied loadouts but do be careful as it’s fairly easy to create a Jack-of-all-Trades. Having all of these paths to follow regardless of the potential pitfall allows for you, the player, to go about your experience as you see fit. Do you want a damage soaking cheetah on the battlefield? What about a glass cannon? As you get more priests as you explore the planet you can experiment further with your “hero” units. 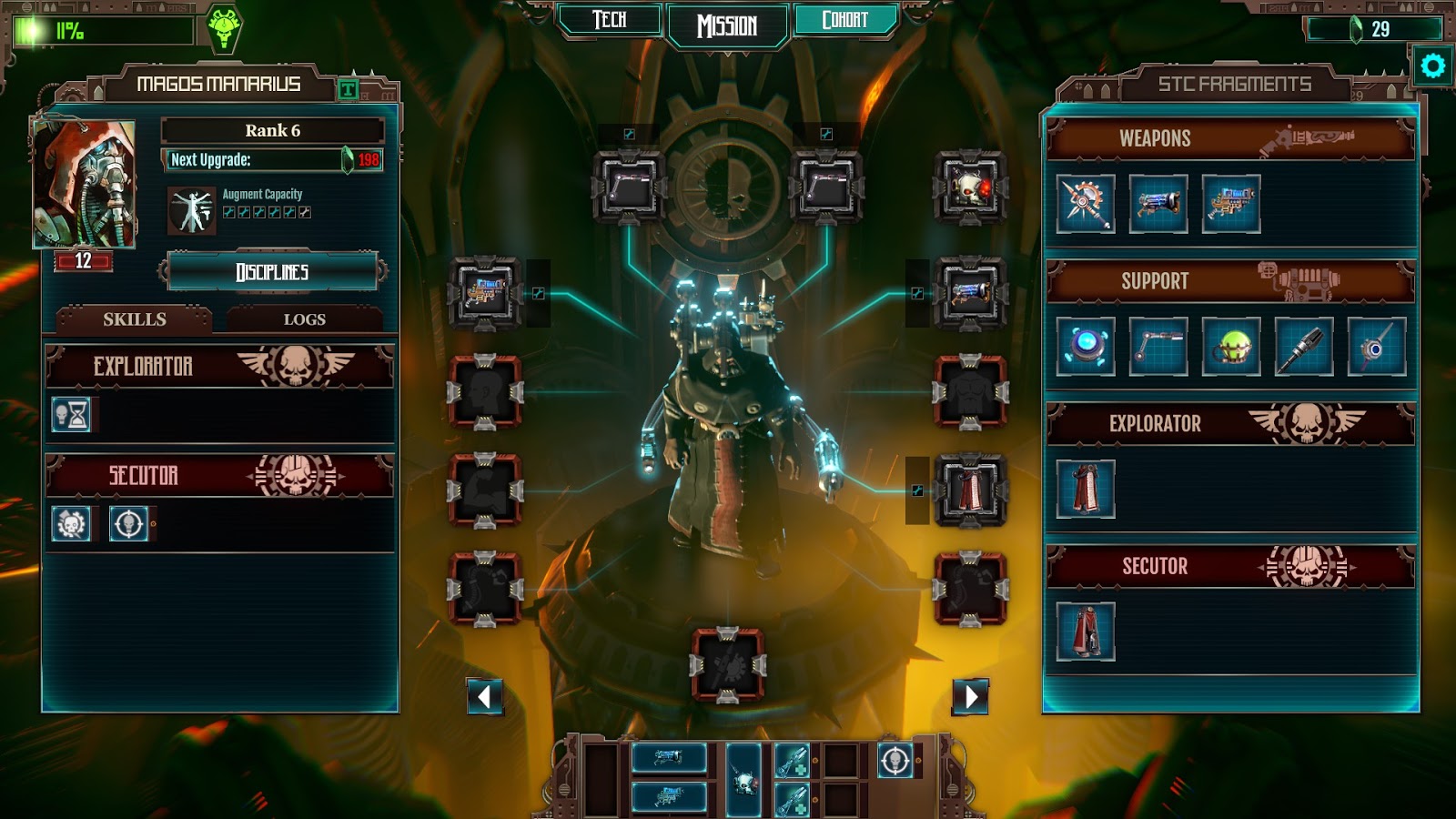 Alongside leveling up your units and acquiring new abilities or discipline specific gear, they’ll be unlocking the ability to use more simultaneous equipment slots. This means more armor, more weapons, more mods. Picking and choosing is easily done as you have but to click and drag as you see fit within the current limitations of a priest’s level. Also another nest feature is that when you get new equipment, it’s not a one off. Every unit can be equipped with the new equipment that you picked up. The o my time that you cannot is when the equipment is discipline specific that that particular unit has unlocked.

Now, we’ve gone over how to level but leveling? It’s not your normal process. Instead of gaining experience point for acts in battle or in exploration, you earn a currency value for your deeds. Finding a cache, winning a battle and successfully pulling off a mission will earn you a few “dollars”. It’s with this currency that you’ll be able to individually upgrade your priest units though beware as the costs of upgrading only get higher and the more damage you take in battle, the smaller the cash flow you’ll receive as you have to pay per hit point missing.

Presentation wise Mechanicus gets high marks in battle. At any time you can adjust your view as needed. Zoom out as far as you can for a better view of the combat field or zoom right in to see massive details of each unit as they fire on one another. Both are always valid and the graphics of the environment and of the units are both pretty and we’ll designed.

Between a well built Turn Based Tactical System and a great exploration base that allows for quicker or longer play session, Bulwark Studios have created a solid experience with Mechanicus. Upping the ante somewhat is that I think Bulwark Studios may have also designed a Warhammer title to make even Robert happy!