Job interviews are the worst. So it’s a good thing that our story starts past that and with the handing over of keys to the kingdom’s prestigious academy. Given to you by the now former principal and husband to the current High Queen, you’ll be teaching the youth the ways of adventure while serving the entire realm as well as its six queens. Trying not to show favoritism, building bigger walls to better train your students and keeping the territory safe will require some effort and to top it all off? You need to graduate students at the end of every semester so there’s no lounging around.

Valthirian Arc: A High School Story is a deceptive title. On one hand it’s a light simulation while on the other it’s a light action RPG. The reason that it’s deceptive is that from start to finish it’s never more than what it was presented to be in the opening five minutes but it feels like it could be. So on the first hand you have the Academy that you start to build new facilities for as the semester advances. On the second you send out students on quests that while mechanically are either fetch or destroy, story wise it’s anything from helping out on a banquet to running around after some wannabe Necromancer. My biggest issue is that it never goes past this point but the overall is so damned addictive that after twenty hours and the credits rolling, I was happy to have done it.

Taking it from the top, you are the new Principal of the Academy. As the principle you are tasked with overseeing the school, its development and the quests that it sends its students on. A bit of a disconnect is that with all of the NPCs present, you, the Principle, are nothing visible tangible. The NPCs talk to you but you yourself have no form and it wasn’t until much later in the adventure that I even realized that while out on a quest, students are students and you as the invisible form are the Principal at all times. It’s kind of weird and it would have been better to have either an avatar or simply keep the two separate especially on a quest where it makes no sense to even be there. 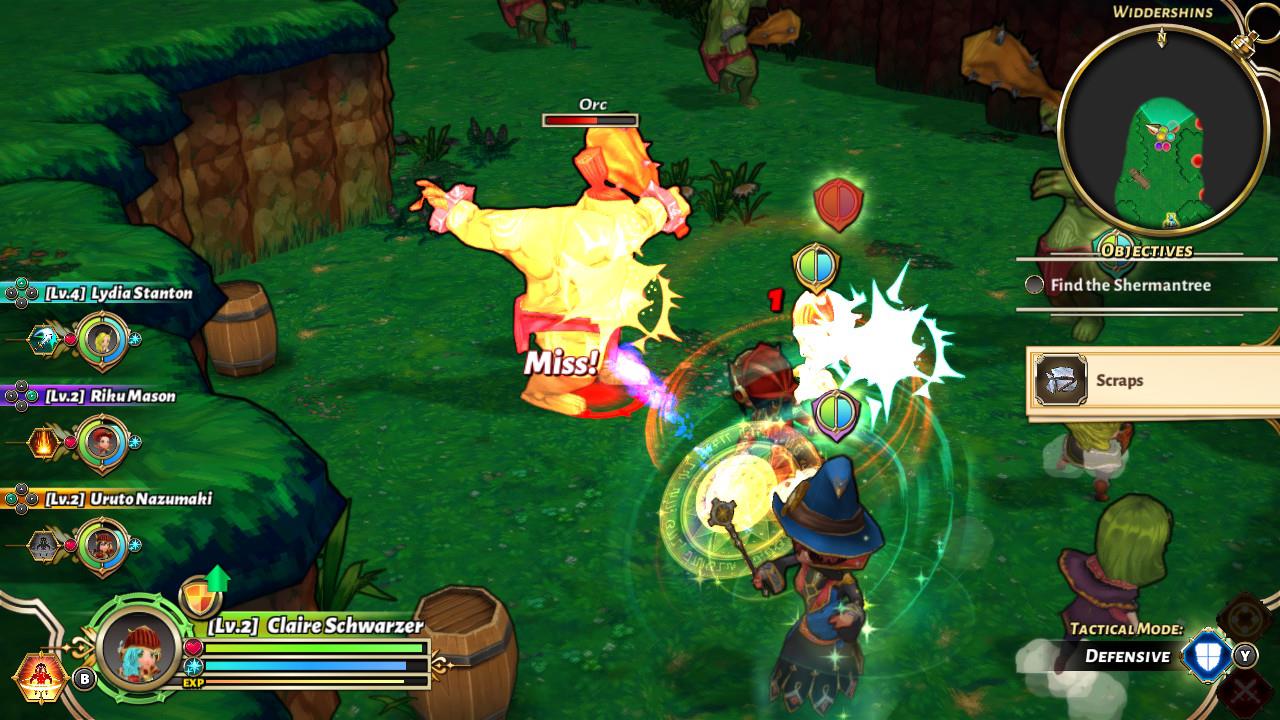 Sending students on quests is the manner in which the story advances. Each quest has a description on the world map as to what the goal of the quest is, what its rewards are, and what level of difficulty the party that you send out are up against. These quests are hands on in which you get to control a party of four in which you control one and the other three follow along. Available for tactics are Focus, which let you run around more quickly, Aggressive, which let you hit harder but take more damage, and Defensive which lets you take less damage but you also don’t hit as hard. Enemies are seen on the field and once you’ve completed your objectives the mission will either automatically end or it will tell you to hustle to the portal. Do you need to hustle? No. You can take your time taking out any other enemies along the way and gathering materials from the sheer number of breakable items littered in every stage.

The second set of possibilities to send your students out on are Errands. Errands are basically like your quests but hands on in which you have to hope that a student’s level, class and equipment loadout is enough to handle the job alongside their peers. Like quests, Errands will require an amount of time in which the students will be gone from the Academy. Two weeks, three, four, twelve, the Errand will state it and for while they are gone, there’s no way for you to interact with them short of cancelling the quest and calling them home. Working with magics numbers, you have a total of three parties and you only ever want to send two parties out on Errands at a time as time itself moves slowly and the only way to blast past it is the time that playing a Quest will take which also range anywhere from one to four or six weeks away from the academy.

Regardless of the style of adventure that you send your students on, they’ll be leveling up and getting to be more powerful. As basic students they aren’t worth all that much even if you begin to buy or forge them new equipment to take with them on their adventures. So once they’ve hit level 10, it’s time to give them a bit of a class upgrade. Knight, Scout and Mage paths become available soon enough after the start of the adventure allowing you to take on tougher quests and foes. 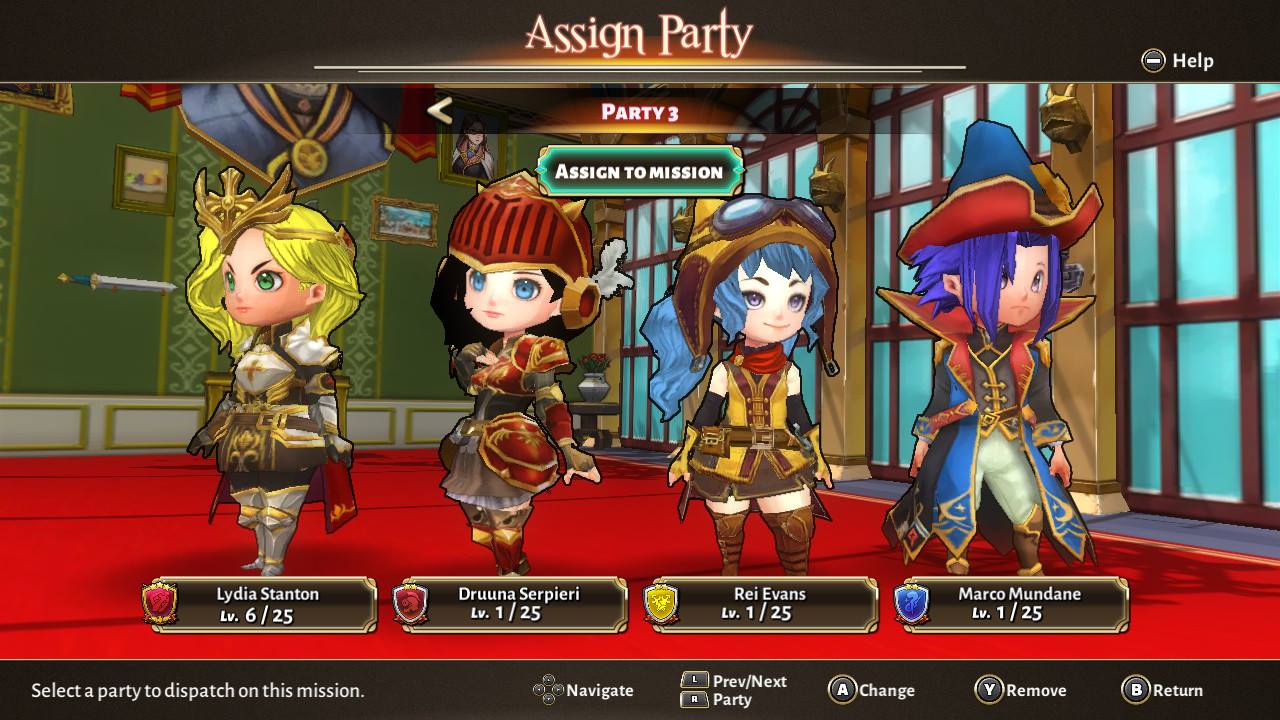 What becomes interesting, if not annoying at the beginning, is that while you can keep students around, it’s not recommended. The reason for this is that the first batches of students have a maximum level of 10. The batches a few semesters in start being able to be leveled up to 15, then 20, then finally 25. Alright so other than a bit more in the character stat department what’s the point? The point is that some skills in the later classes unlock at 15, 16 or 17 making the earlier batches of students not worth keeping around for adventuring purposes and graduating them should be a bigger focus which brings us to the last element, graduation.

Graduation is when you set a student up to leave the school as their education has been deemed complete. In order to do so a student has to be at least level 10 in the character class that they currently occupy. The higher the level, the higher the class, the better the rewards that you will receive when graduation comes at the end of a semester. Rewards are both a cash influx as well as a reputation boost to your school which is needed to build better facilities and upgrade current ones past their current status. This should all be done carefully though as once a student has been deemed ready for graduation, they can no longer be sent out on Quests or Errands. They’ll continue to peruse the campus but they’ll no longer count towards your maximum count.

From there mechanically, that’s about all there is. Quests. Errands. Rinse. Repeat. I’ll be honest for a moment that I just about lost interest at this point. Entering quests, leveling up your students, setting them up for graduation, and then more quests. Then I hit a wall. All of a sudden the jump in difficulty sparked a renewed interest as it was no longer one powerhouse power leveling three others in order to simply use them as a bonus cash inflow. Suddenly I had to take on quests with decked out advanced classes that were properly geared for combat. Then, out of the blue some quests started coming in which added more than just text on the screen. Your main NPCs that help you run the school started issuing their own quests which lead to some fun little story lines that made all of the empty previous quests fade into the background. This influx of story carried straight through to the end. 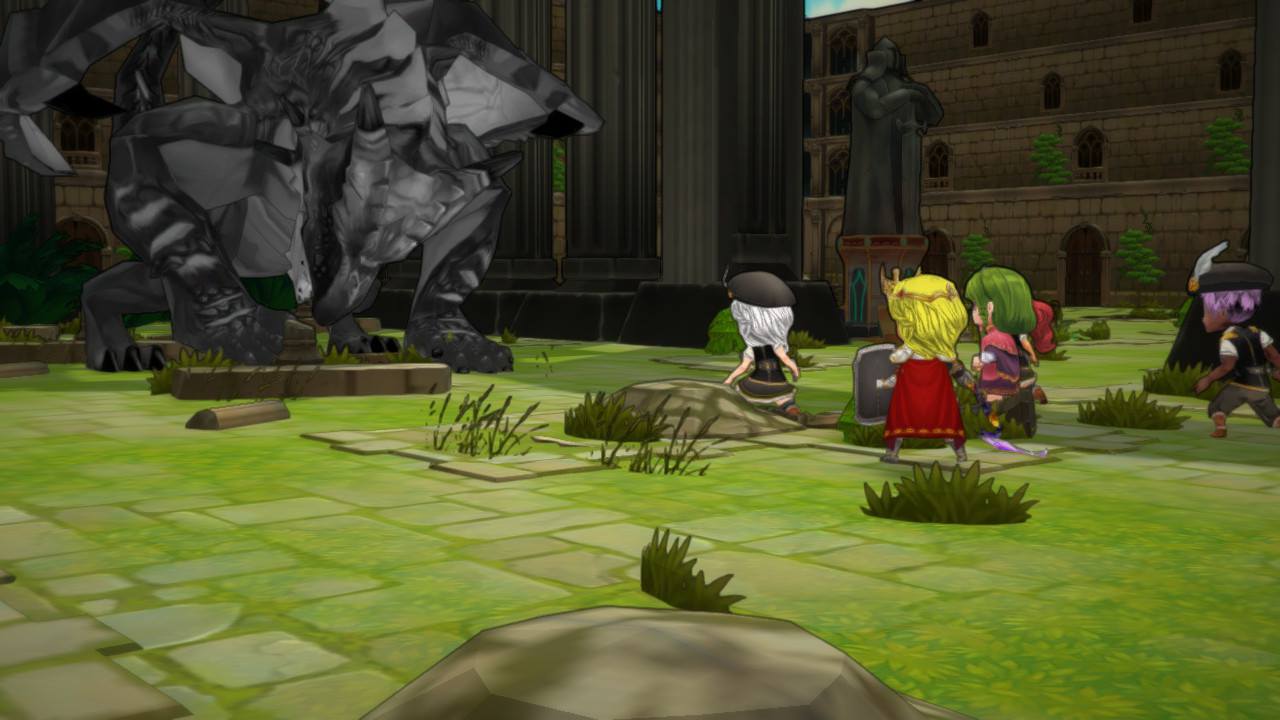 My only wish is that the main bulk of the story should not have been hidden behind hours of gameplay. There is a bit sprinkled here and there but never is it really fully explored until that later point which is unfortunate because it changes how to approach the overall experience and some may decide after four, five or six hours that they’ve seen enough. The sad reality is that things really start to get good after seven or eight hours when all the fun quests and the dialog comes out. By this point, instead of just clicking on quest after quest, I was targeting continuations of quests lines that followed which made it all the more interesting as I didn’t have to wait for whatever happened next.

On an overall, Valthirian Arc: A High School Story will probably remain a hidden treasure to a lot of people because of its pacing. While I wish there was more depth to the simulations as there really isn’t much else to do but place a building and upgrade it once it’s time, it’s a light feature that compliments the Quests and Errands as each building grants boosts from attack, defense to experience or item gains.