Other Platform(s): Microsoft Xbox One

Wanna feel nostalgia… Then look no further because our loveable purple dragon is back. For those who are first timers to the series, Spyro the Dragon was first released back in 1998 on the PlayStation by Insomniac Games. Since then many titles have appeared with our tiny purple friend. Some great, some good… Some not so good *cough* Year of the Dragonfly *cough*. But what I do know is that the first three games released back on the PS1 were the platinum form of these masterpieces.

Boy, oh boy, was my 7 year old shelf ready for this game. Dad comes home after work one day with this in his hand and I bounced with anticipation. Now fast forward 20 years later and here I am still bouncing out of EBgames with the remastered edition of the first three games. We start off all three games with our little dragon hero, Spyro, and his dragonfly companion, Sparks. Together they cross the different realms to protect its dwellers.

I had the pleasure of playing a bit of Spyro with my companion Richard.
“Richard, mind giving everyone your thoughts on the Tree Tops level we played together…?”
“$&@#%, that level!”
“Thank you, for your honest input.”

In Spyro the Dragon (the first game) your objective is simple. Nasty Gnorc (bad guy) has been ‘offended’ by the dragons of his realms and turns them all to crystal… Or is it stone??? (It’s crystal) Spyro, being as tiny as he was, was ignored by Nasty and is determined to beat that Gnorc to next Sunday and save his brethren. Spyro: Ripto’s Rage (second game) continues shortly after the first game. Our purple friend just wants to spend some time relaxing and goes to vacation in Dragon Shores, but unaware of other events happening in a different realm he is fished out of a portal to the world of Avalar where a warlock named Ripto (other bad guy) is wreaking havoc. He must help his new friends, Elora and Hunter, defeat Ripto. Finally, in Spyro: Year of the Dragon (third game), which also follows the pervious game, our reptilian hero chases after some egg thieves into a lost realm. There Spyro, Sparks and Hunter encounter The Sorceress (yes… another bad guy, I know) who has stolen the dragon eggs to power her magic and the realm. 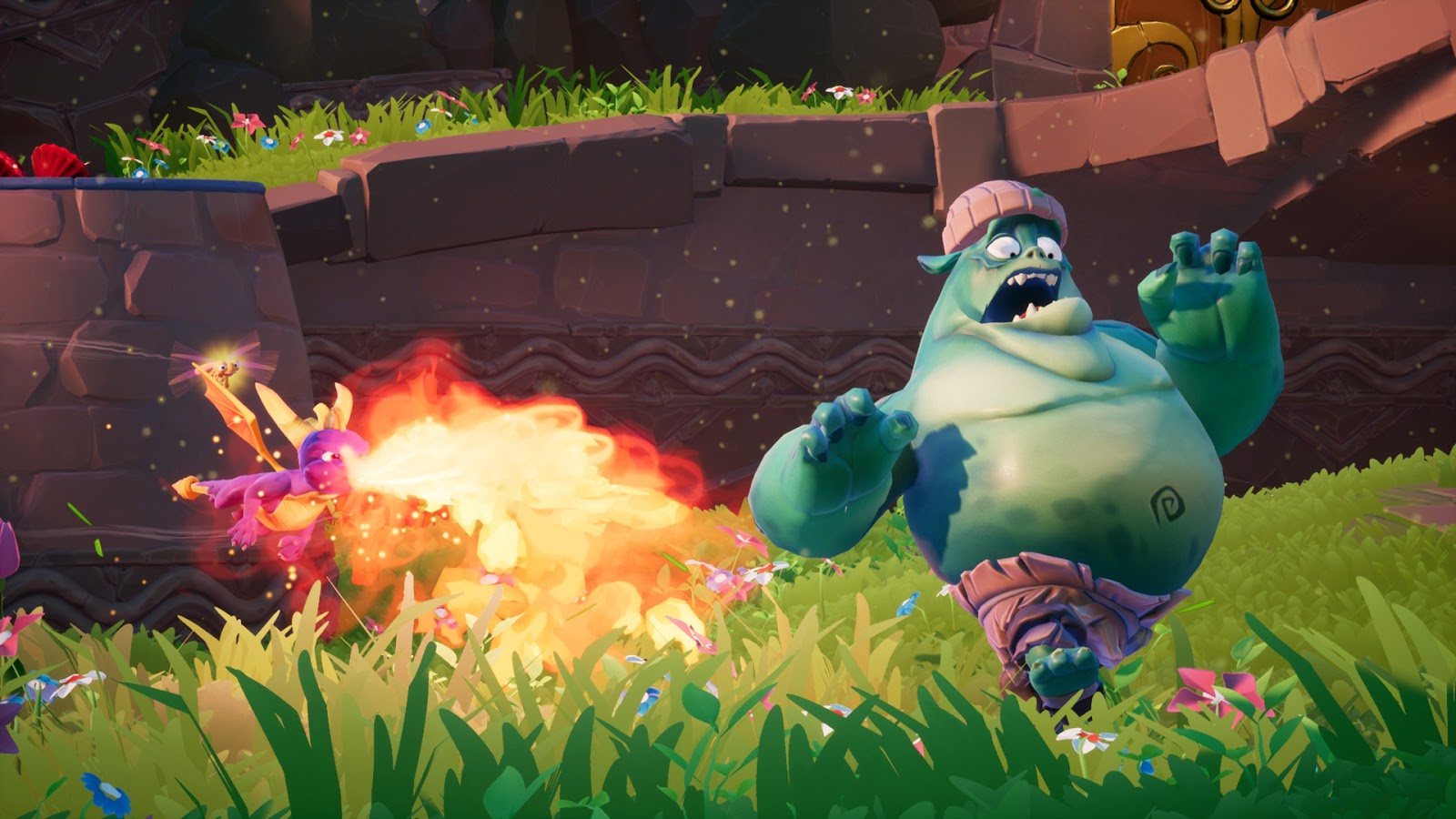 All three games basically follow the same control mechanics. As Spyro you have the ability to jump, glide, tackle and breath fire. You can use these abilities to take out bad guys by charging them or lighting them up like the 4th of July. Flying is especially useful to getting at those hard to reach places.

As you traverse the game you’ll come across portals that will bring you to new areas, each one is unique and different. While you visit these tiny domains you must keep an eye out for treasures and the sealed dragon elders. The more you collect the further you’ll advance in the game.

Sparks is also pretty handy if you pay close attention to him. If you get injured by an enemy your sparkly friend will start to change colour, indicating that your health is low, but if you feed him a delicious helping of butterflies your buzzy buddy will point you in the right direction. I mean it, Sparks can also detect any treasure you may have missed. (Now in the first game as well)

Not much changes between the first and second game, other then a couple added skills such as swimming, climbing and rock smashing, until you get to the third one. In Year of the Dragon, Spyro gains new allies such as Sheila the Kangarou, Sgt. Byrd the penguin, Bentley the Yeti and Agent 9 the Chimpazee. Each character has a different play style and will only be playable through certain mission. Sparks also gets to be playable in special mini games where you fly around spitting… light beams? (I don’t actually have an answer to this) At the enemies. 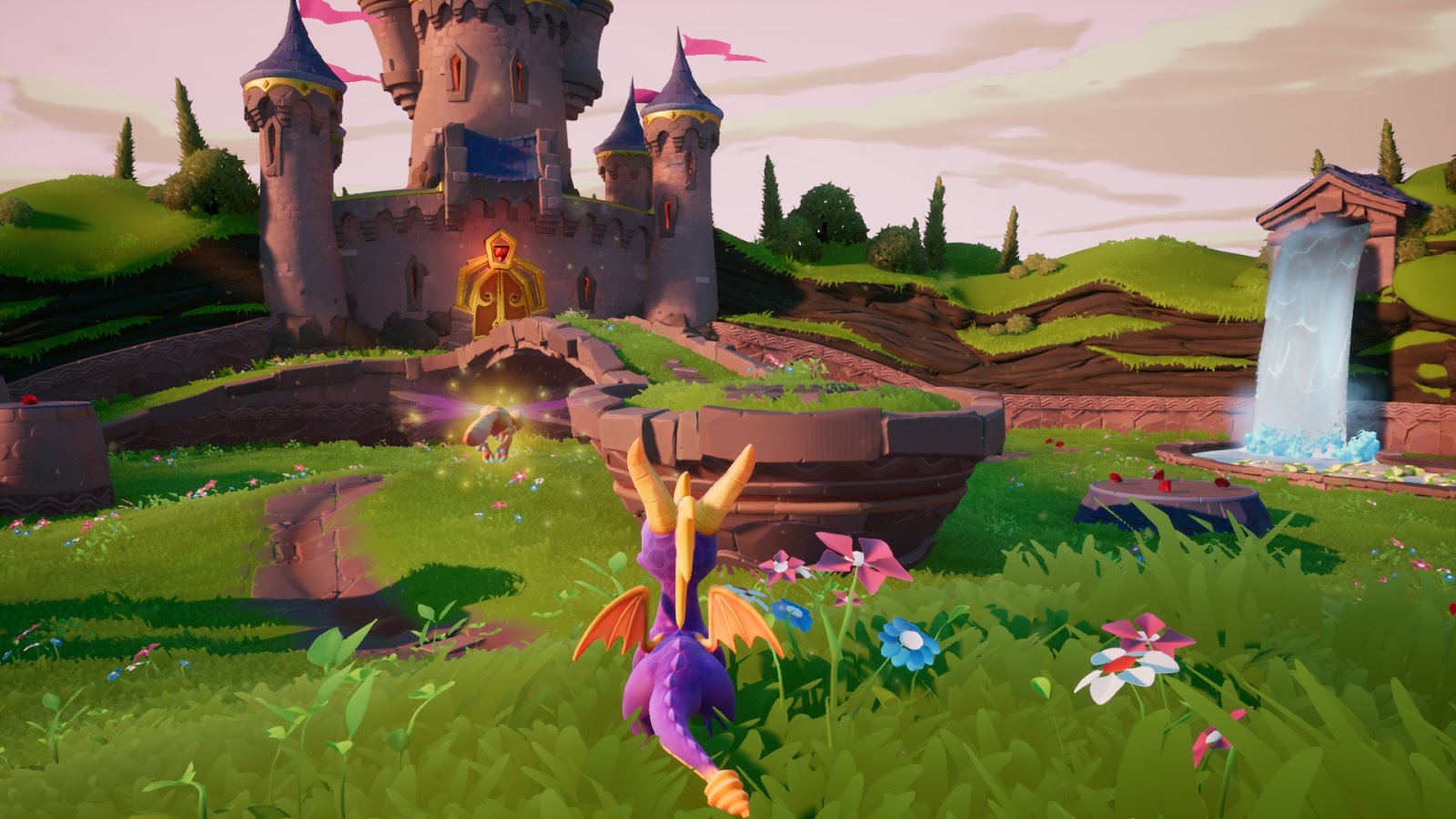 Now then, let’s get down to the bread and butter of the remake. Toys for Bob, bless your little heart for taking on this classic masterpiece and making it even BETTER. By the gods, this game is B.E.A.U.TIFUL. It’s like wearing contacts for the first time and the world around you suddenly just POPS! The colours are rich and the new character models are to die for. Spyro, never looked better. They even took the effort to remodel EVERY SINGLE DRAGON IN THE FIRST GAME!!! Wow… They have personalities now and quality animation. It just brings tears of joy and nostalgia to us original players. If any other company would like to follow this lovely example of how a remake should look like then please call Toys for Bob/Insomniac games, thank you.

There isn’t much to complain about in this remake. All the old glitches seem to have stayed they same with some minor tweaks, here and there. But I find that’s what makes the game even more charming is to keep it exactly the way we grew up with. Except for Tree Tops in Spyro 1… It still sucks.

To conclude, the Reignited Trilogy is... just as it's titled. REIGNITED, INDEED! I can happily say that this game is worth every penny and the time to experience for both new comers and old school players. This game gets my rating of 10 out of 10. Bravo, Spyro. You will be remembered as such... And not your ugly counterpart that is Skylander... Just, no.