You are reading
Tangledeep – Switch Review

If there’s one thing that I need several times a year, it’s a good Roguelike. You move, they move, you attack, they attack, whoever is left standing can declare themselves the victor and take the spoils owed to them in the vein of loot and experience points in order to level up. Tangledeep, by Impact Gameworks, both scratches that itch and a bit more as it’s not your normal Roguelike and there are some elements that others could learn to implement which could remove some of the frustrations for newer players. Does that make it easier? No. It just makes it more accessible for those starting out.

Speaking of starting out, Tangledeep offers you up front your choice of nine of the twelve possible classes for your heroine. An Edge Thane, aka what I call a badass Barbarian Queen, a Holy Paladin, a Sorceress of power or even a good old fashioned Bard. Each class offers a different experience because of their skill sets as well as their preferred choice for combat. Once this choice has been taken, it’s on to pick two feats from a list that act as a permanent bonus until you die. What happens when you die? Other than life’s greatest mysteries after how they get the caramel in a caramilk, it’s really up to you.

There are three choices for your adventure. The first, and the most simplest and truest to a Roguelike experience Heroic Mode, is if you die, your character is dead, your inventory is lost, and you need to make a new character. Side to that however, whatever has been unlocked for job classes or the town are kept, items and money that have been stored and banked in town will remain up for grabs and while you need to pay a fee in order to store anything, there are no fees to remove them for use on a later character. 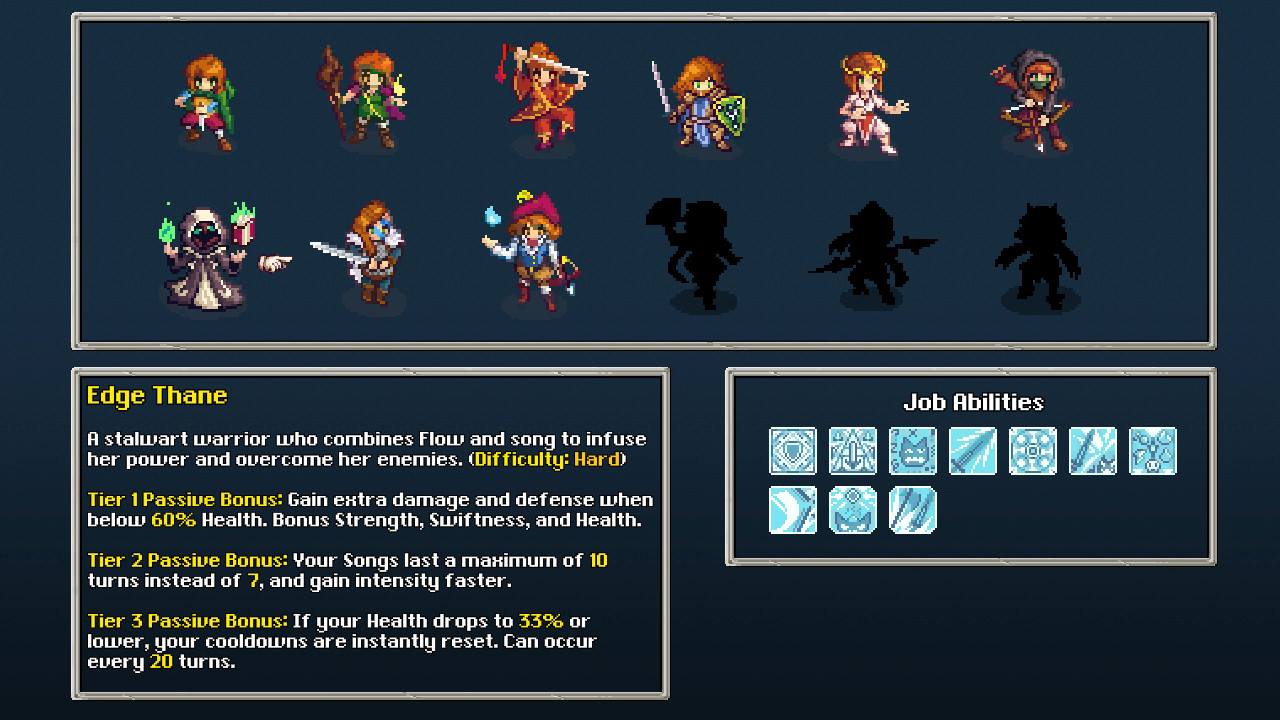 The second choice from the first, Adventure Mode, is more akin to Dragon Quest. When you die, you get ported back to the last safest point, in this case “town”, you lose half of your money, all of your unused job points that you’ve been saving up, and whatever experience points that didn’t make it to a level up. Finally you have the third mode, Hardcore, which basically sets everything back to zero with no questions asked.

Kicking off my adventure like the Roguelike fan that I am, loading up Heroic Mode, taking my first steps as a Barbarian Queen, it wasn’t long until I was dead and dove back in as a Paladin. Hey, you’re going to die, it’s a Roguelike, it’s a fact of life. Now having a bit more of an idea of what to expect, I was a bit more prepared. So like a standard Roguelike, in Taking for every step that your character takes, everything else moves. This is the basics of a pure enough Roguelike. Once you get close enough to an enemy, you can swing your weapon and from there RPG mechanics kick in for the amount of damage based on your character level, character stats, and weapons. If you attack from further away, which is recommended by the ingame tutorials and they aren’t wrong, you can normally get two or three attacks in before the enemy can land their first. It helps keep your hit points up there.

From there, you explore various procedurally generated floors in order to uncover the secrets of the titular Tangledeep. Where things start to become a bit more interesting isn’t the leveling up. It isn’t the monster types. It isn’t even the grounds that you walk on as you go deeper into the dungeon. Those are the basics. Where things get interesting is what Tangledeep does that a lot of others do not. Once you go up a set of stairs? You can go back down. Think you missed something? Go back and check. You can really take your time or you can rush forward and if the floor above is too much, you can head back down to level up a bit more. The only thing that you need to pay attention to in this case is your stamina meter as if it runs out, you’ll start to lose health and then die once your health runs out. 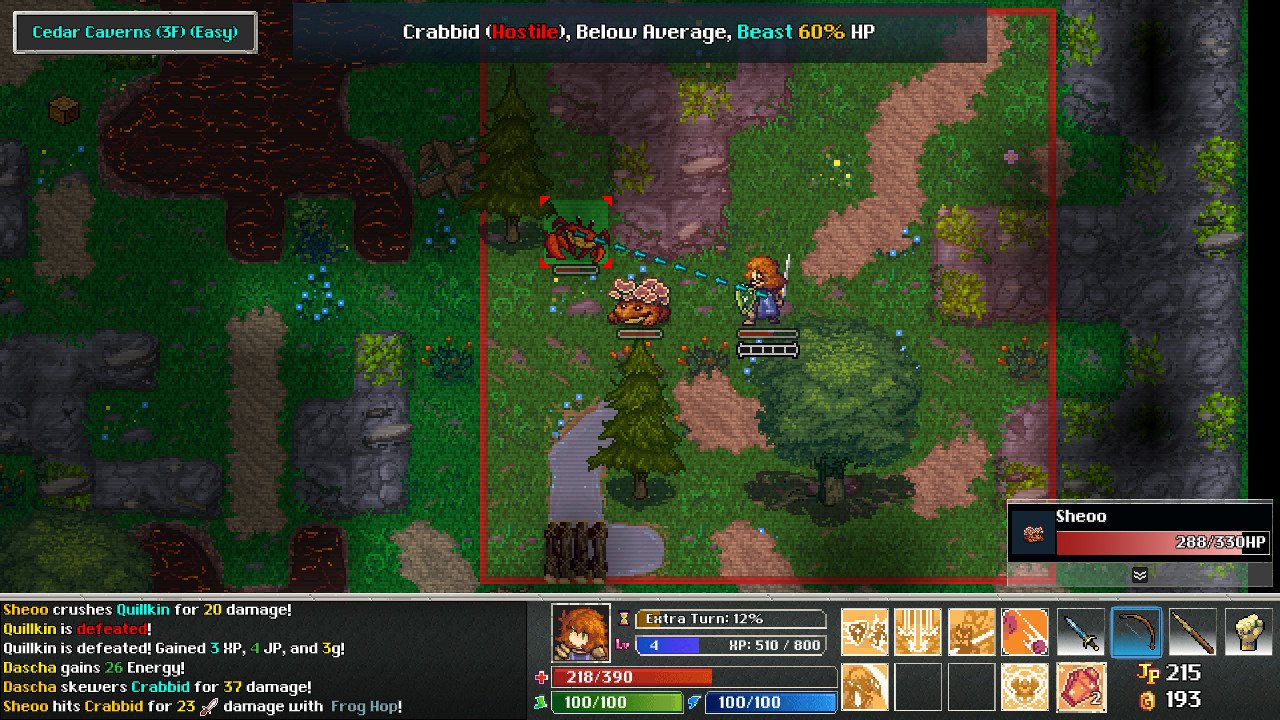 Where things are also different is normally when you go into a Roguelike’s dungeon, there’s an uncertainty of whether or not you can actually make it out. Some are designed that you must make it through. Others give items that can be lost. Tangledeep gives you a freaking Town Portal. A TOWN PORTAL! Usable, whenever. You’re never EVER trapped. Or are you? So while you have an unlimited town portal, the portal itself requires several turns in order to activate once you’ve selected it for use. I’ve honestly died after activating the portal so it isn’t a full save but being able to go back to town whenever was amazing.

Town itself is two main sections. The first where you land has a few shops, the ability to change your class which is very useful if you took Adventure Mode, a bank to store cash and items. The second part of town has a pen in order to keep captured monsters in order to raise them to fight alongside you as well as a plot of land run by a frog for planting trees that will produce a variety of items from their branches. The town itself isn’t meant to keep you around for very long, it’s meant more for coming in, getting whatever you need to do one, and heading back out.

There are some issues with the control to Tangledeep that could be a bit annoying at times and there was no real way around it. Movement by default is aimed at moving the left thumbstick or the D-pad and then clicking on “A” to move. For every square that you wanted to move, you needed to click on it. There was NO way that I was going through that again after last year’s Noamund. Thankfully there was an option that allows movement freely of this issue, however, there was no way to simply look into a direction without moving. So if you wanted to aim yourself in preparation for an enemy, you couldn’t. The auto attacking is pretty good but when there are several enemies around, your best bet becomes moving into the enemy you want to attack as the move command also acts as an attack command when running into something that can be killed or destroyed. 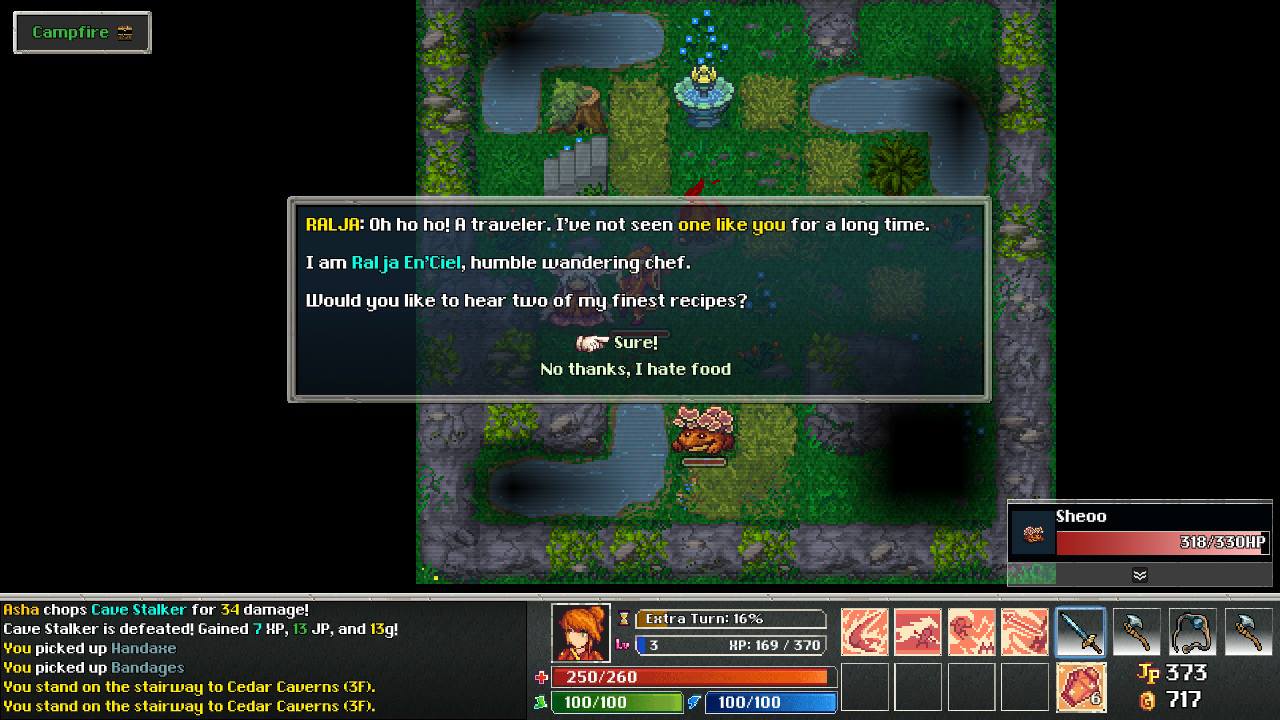 Overall Tangledeep was a lot of fun and short of the movement scheme, very well designed. Adding in a bit of accessibility into something as unforgiving as a Roguelike made for a familiar yet new experience that takes some of the stress away from the front end of the experience while in another way never removing it at all as the sharp fangs are simply better hidden.