You are reading
Batman: Rise of Sin Tzu – Retro Reflections

Batman Rise of Sin Tzu is a beat’em up game, like the ancient Double Dragon (1987) or Final Fight (1989). However, this time the hero is not some generic muscular dude who tries to save his girlfriend from thugs; it is the Caped Crusader himself. The story involves a master martial artist and strategist from the Far East who sets out to conquer Gotham by weakening and finally defeating its renowned defender. To accomplish this ambitious goal, he sends three super villains against the Dark Knight, accompanied by waves of criminals who flood the city streets. Should Batman fail to stand up to the challenge, he will lose not only his beloved city but his life too.

Rise of Sin Tzu did not receive much appraise in the past but it’s easily one of my favorite PS2 games. To begin with, it offers pure beat ’em up action: no enemies with huge life bars (Urban Reign), no silly activities like buying clothes (Beat Down), no complicated control systems (Death by Degrees); just run forward and beat mercilessly anyone who dares to cross your path. Batman is powerful but not invulnerable. Your moves are strong, however, you need skill and speed to survive. Whenever I disposed of thugs, rescued a civilian or performed a spectacular move I felt a sense of satisfaction that kept me playing till the end. 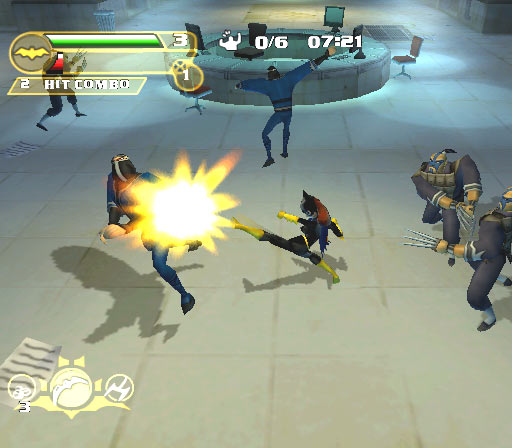 As in most respectable melee combat games, two attack buttons are available, one for punches and one for kicks, allowing you to make combinations instead of just mashing the same button continuously. The strongest attacks are those with the “delay” mechanic, meaning that you need to wait a fraction of a second before inputting the next command (for example, “punch, punch, delay, punch, delay, punch”). Initially, I thought they might be hard to pull off but if you observe Batman’s animation carefully you won’t have a problem. Combos with the delay mechanic are spectacular and are necessary for the last chapter and the last boss, Sin Tzu. Moreover, as Batman performs successful attacks or collects red orbs left by defeated adversaries, a meter is filled. Once it is full super moves can be activated. After you perform a super attack the meter is slowly depleted, however you can still activate supers as long as it has some juice left.

Besides punching and kicking, Batman can jump, grab enemies, block, dodge, taunt and use gadgets. I had forgotten blocking was even an option until I had to deal with Sin Tzu’s energy field, which cannot be avoided. Dodges are handy for escaping a narrow situation and even knock down foes. Concerning gadgets, there are three kinds of them: batarangs do not deal damage but they stun foes and their upgraded version hits up to four targets; in addition, they are infinite. Gas bombs incapacitate bad guys around you for a few seconds but are limited in numbers. Lastly, the famous batgrapple disappoints since it is not used to access higher levels or traverse chasms; it just lets Batman jump away and kick enemies in a row.

The level design is linear and your goal simple: beat everyone in the vicinity and a flashing arrow will show you the direction to follow. If you fail to clear the area within the time limit you lose a life and get 15 more seconds, so sightseeing is not recommended! Often you find barrels that can be blown up from a distance with a batarang, catching criminals in the explosion, and you can also lift heavy objects, such as crates, to smash some thick heads. At the end of a stage you earn points based on your performance (more points are awarded for stylish combat) and buy new moves, upgraded gadgets or tokens; those unlock extras at the menu screen, e.g. character models. 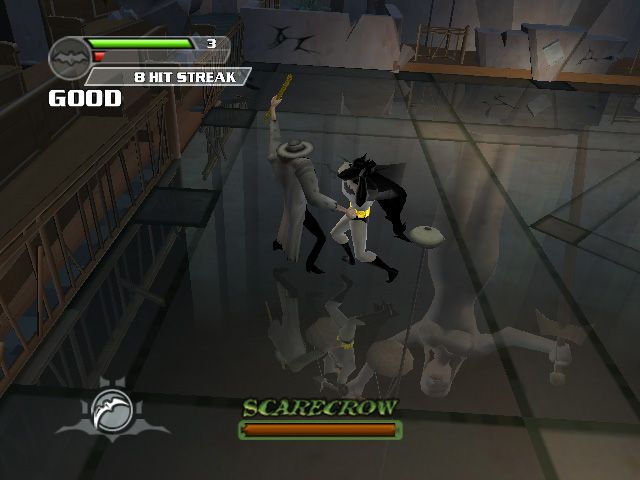 Technically, the game is not a masterpiece, nevertheless, it is visually and acoustically pleasant. Batman’s animation is impressive, including rising uppercuts and mid-air kicks. The scenery is nice, reminding of the animated series with dimly lit alleys, chambers with marble floors, docks, a factory and Arkham Asylum, drawn with appropriate colors and style. The music is different from what I expected, nevertheless it works fine, setting up the right mood. The sound effects emphasize the action and the voice acting is good too. I especially enjoyed Batman declaring “I am vengeance”, a reference to Ubi Soft’s other game, “Batman Vengeance”.

The difficulty is raised gradually: you may punch and kick to all directions to complete the first two chapters but enemies get tougher afterwards and learning new combos is vital. Chapter four is even more challenging, as you face thugs with claw weapons, like Vega in Street Fighter, and rely on gadgets and special moves to win. Sin Tzu, in particular, is a very worthy opponent, even on the easy difficulty; without special tactics you will never defeat him. The other bosses, Scarecrow, Clayface and Bane, are not nearly as hard but they involve different attack patterns. I found it interesting that Bane appears in the batcave and if he grabs Batman he breaks his back (thankfully you only lose a portion of health when this happens instead of being crippled)! Chapters are divided in short stages and health bonuses help you stay alive. Sometimes you may even find an extra life. The game has replay value too, since multiple difficulty levels and characters are selectable. Besides Batman, Nightwing, Batgirl and Robin wait eagerly to prove their mettle. Personally I have completed the game on “easy” and intend to try the “normal” difficulty soon.

Though I have no complaints, a possible sequel could benefit from a couple of improvements. First, the Batman universe has fascinating characters, so it would be intriguing to learn something about them as the story unfolds. Also, a little exploration and climbing could add to the gameplay, as long as its core is unharmed and you don’t end up dying repeatedly by falling in chasms (once again, “Batman Vengeance” comes to mind). 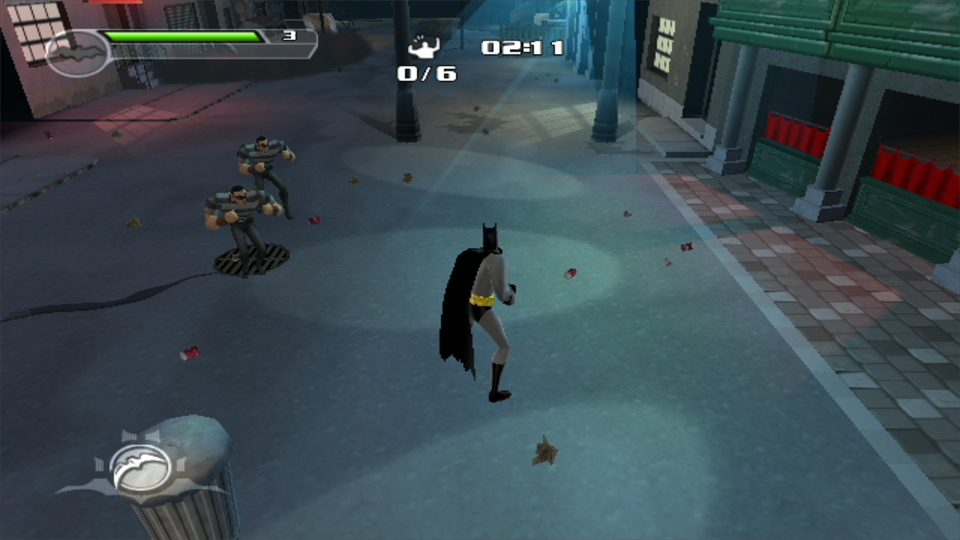 To conclude, Batman Rise of Sin Tzu was really enjoyable. Its fast pacing, cartoonish graphics and old school beat 'em up action won me over. If you expect intelligent gameplay and intricate level design you will be disappointed; on the other hand, people thirsty for traditional arcade action will find a purpose here.