Busty ninjas abound (and bounce) in the latest (re)instalment of Senran Kagura. As a 3D remake of the 2D Senran Kagura Burst, there’s a lot that has been updated, some for the better, some not so much. So jump into the world of the shinobi, and let’s see what the improbably female cast of Senran Kagura have to offer in this instalment.

Burst Re:Newal is a Re:furbishment on the Senran Kagura Burst title that came out on the 3DS some time ago. While the general plot remains the same, there have been a few tweaks here and there. In fact, the game somewhat retcons itself at times, depending on which storyline you follow, but the basic principle is still there.

The two storylines you can choose from are: Hanzō academy or Hebijo academy. Each Academy is basically a highschool for shinobi, with Hanzō academy being for “good” shinobi that are government sponsored and do “above board” work. Hebijo on the other hand, is for “evil” shinobi, that take part in subterfuge, assassination and the like. Choosing Hanzō academy will focus on the lives of the main characters of Senran Kagura: Asuka, Ikaruga, Yagyū, and Katsuragi. And Hibari. 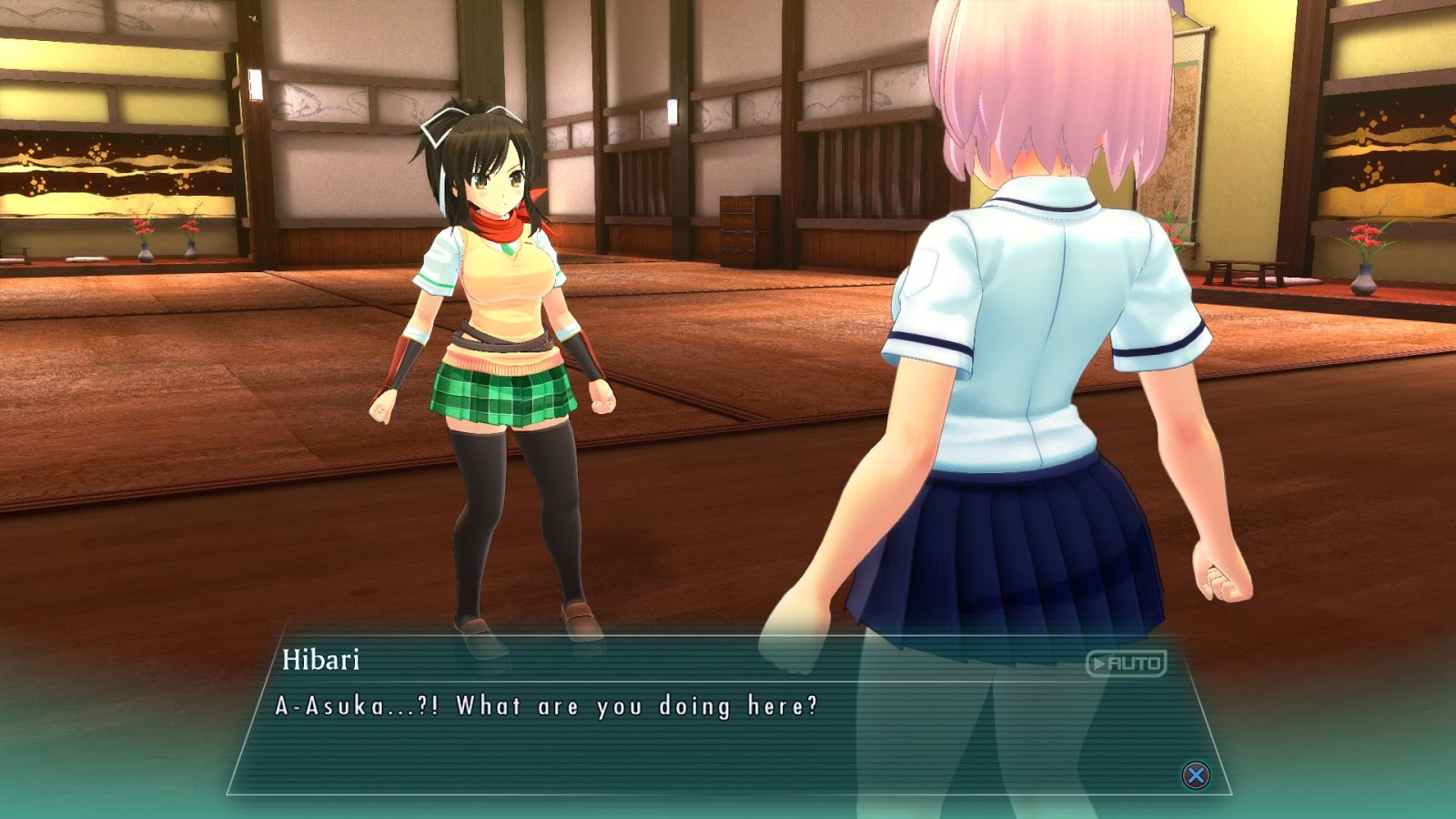 These five girls are part of the secret shinobi class, along with a mysterious upperclasswoman, who could, in fact, probably punch out a building with relative ease. Unfortunately, she decides not to help out when the school is attacked by a group of girls from Hebijo, who are insistent on either engaging the Hanzō students in a duel to the death, or to steal the Hanzō super secret ninja…secrets… Unfortunately for Asuka and the rest, the Hebijo girls have plot armor, even if you soundly beat them in battle. So Asuka and the rest must stand up and fight for their friends *cough, Ike, cough*.

If you decide on seeing what Hebijo has to offer, you get to play as the “antagonists” of Asuka’s story: Homura, Mirai, Yomi, Hikage, and Haruka. You get to see Hebijo shinobi life, as there is no “real” highschool with a secret shinobi class, Hebijo is entirely devoted to extreme training of evil shinobi. Regardless of which school you start off with, you can switch back and forth pretty much whenever you want, so don’t feel worried about being locked into one storyline or the other, as you can do both, even at the same time if you want to.

Gameplay in Senran Kagura, in general, is of a more “beat-em-up” style, similar to the “musou” games, or dynasty warriors if you’re more familiar with that. There are generally a multitude of rather weak enemies, and you have to clear them out by beating them unconscious, or dead. The game is a little lax on whether you actually kill your enemies or simply knock them out. Originally this was done in a side-scrolling-type manner, but now you’ve got a “3D arena” to beat people up in. You’ve got the standard light and heavy attacks, a short dash (which does surprisingly less than you’d expect), a jump, and some special moves. You can use a “shinobi transformation” which will turn the character into their “ninja mode”, which fully heals you, changes your moveset up a bit, and gives you some boosts. 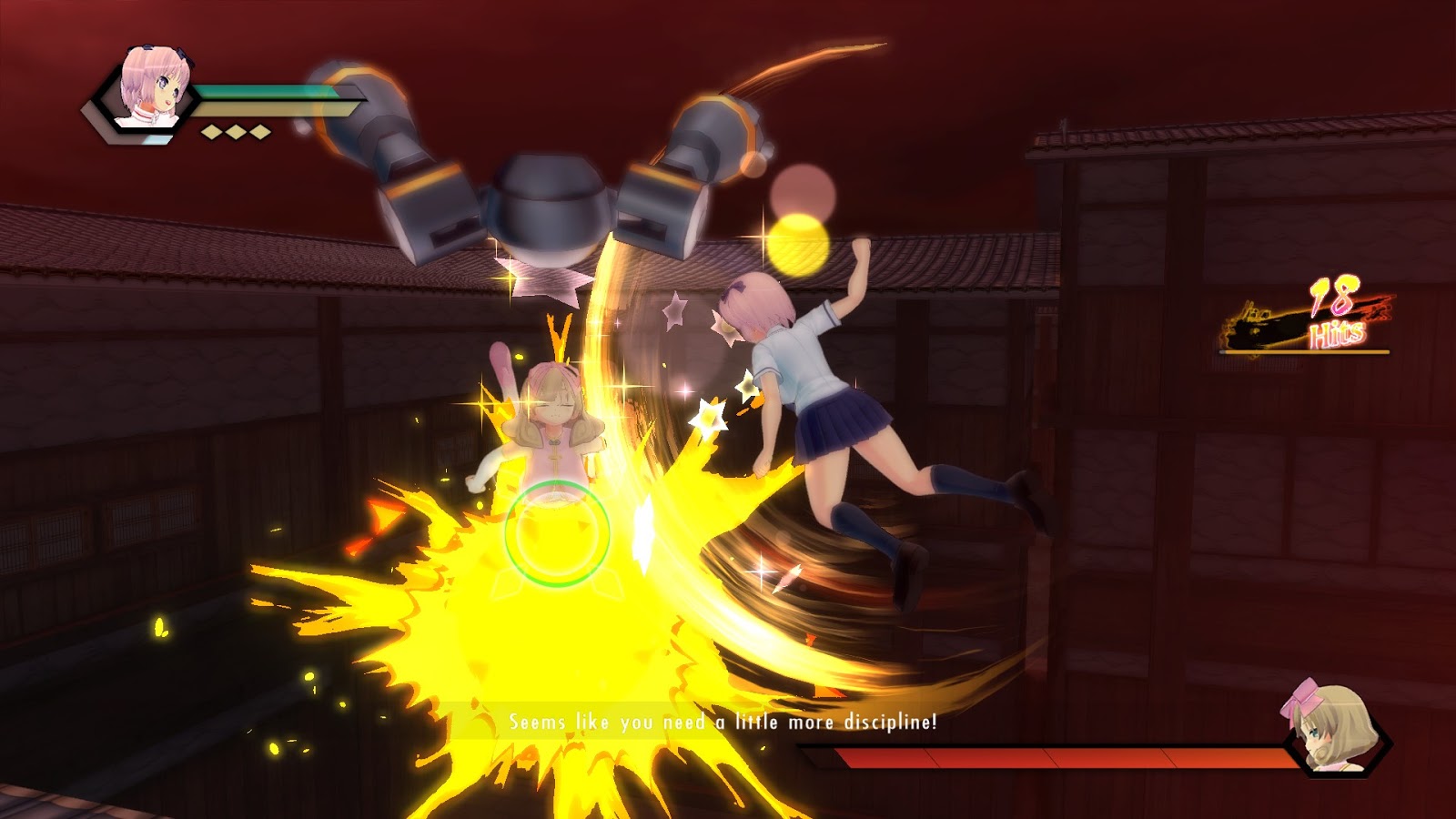 My general strategy during tougher levels was to wait until I was almost dead, and then pop the transformation. Or you could use it as soon as it’s available, whatever you enjoy more. In addition, there’s a “frantic” mode, where you quite literally strip at the beginning of the stage. Your defense takes a super huge hit, but you have an infinite combo and do a lot more damage. Seriously though, try not to get hit if you use it. While in either mode, you can use special ninja moves by consuming part of your ninja art gauge, which fills up when hitting or getting hit. After progressing far enough through the game, you unlock a Super Ninja Art, and I am not embarrassed to say it took me a really long time to figure out how to use it first time I played a Senran Kagura title. Thankfully, the method of use hasn’t changed, you hold the transformation button and hit the dash button, but the game isn’t particularly forthcoming about that information.

Unlike past installments of the series, where I was generally able to just mash away and be decently competent at completing the stages, a lot of the “one-on-one” fights against the opposing school’s characters tended to take a bit more skill or strategy. For example, the counter function will be one of your best friends in later fights. When you guard just before an attack hits, not only does it flinch back your opponent, but it also stuns them, allowing you to get full combos in, which is even more useful if you connect with the final hit which sends your opponent flying, who you can then chase to continue your combo. This is repeatable if the enemy tries to attack you while in the air. Your other alternative is the “burst” skill, which gives you a boost in stats until it runs out, at which point you can use a powerful wide-range attack.

The updated visuals, refurbished gameplay, and solid soundtrack really helped the “Re” part of Re:Newal. It was also nice to see a more accurate combo counter, with an actual gauge on it so you could tell how long you had between losing your combo. When you pause in-stage you get a retro style pixelated screen which was pretty cool, and the introduction voices and facial expressions of the characters at the introduction to the missions and between missions in the “hub” area change depending on the story tone, which was a nice little touch. The game isn’t without its issues, however, as there is a problem where the text during the story modes will just blow right past without giving you a chance to read it. Also, who decided on the annoying flashback filter they have? It’s ok as an intro, but having it throughout the scene is actually really annoying. The camera could also use a bit of work, as I found it getting stuck in corners or behind objects way too often. Overall, I have to say I really enjoyed my time with Senran Kagura: Burst Re:Newal. While it certainly felt “slower” than its predecessors, it also felt like there was a lot more attention drawn to the combat. The “plank hair” is still a prevalent issue, but you probably won’t be focusing on that too often during gameplay. It was definitely interesting to see how they changed up some of the characters, for example Mirai used to be the character I found the easiest to beat in the previous titles, and in Burst Re:Newal she’s turned into the character I go “GRAARGGH” while fighting. I do want to know who’s in charge of the difficulty scaling though, because the game isn’t too hard, and then you hit the last boss and wonder what you’ve done in your past life to deserve such a thorough beat down. Not to mention the one man gauntlet that is the “bonus boss” mission after the main storyline.

While Senran Kagura: Burst Re:Newal probably isn’t winning any “publicly playable” awards, it definitely isn’t something to cross off your list just for that. So why not give it a try, or at least listen to the awesome soundtrack, and sacrifice yourself to the will of the dance.