In a shocking twist, given the yearly barrage of absolute garbage Warhammer titles, the latest offering in the long-running Warhammer 40k universe from Tindalos and Focus Home is actually pretty damn good. Following up on 2016’s relative snooze-fest that was Battlefleet Gothic Armada, Tindalos improved on a great many features and aspects of the grimdark space-naval strategy title. While I can be severely critical of the Warhammer name, I was pleasantly surprised that the mix of Warhammer and space (two of my favorite things) worked out extremely well.

Battlefleet Gothic Armada 2 is a rock-solid realtime strategy game set in the dark reaches of space and pits you against hordes of heretics … or xenoes, or any number of nasty badness from the Warhammer 40k universe. Set across three separate campaigns, the Imperium of Man, Necrons, and Tyranids, Battlefleet Gothic Armada 2 will teach you the finer points of broadsiding, ramming, and boarding throughout its course. The real kicker? Not only is it challenging, but it is actually quite fun… Not something that I would normally say about a modern Warhammer title. Kudos to Tindalos and Focus Home for really doubling-down on user feedback from the first title and delivering a solid, challenging, and immersive gameplay experience set in the 41st millennium.

Wile nobody would call any of the three single-player campaigns exactly ground-breaking in their storytelling, it should be noted that there is a certain high-octane edge to each of the missions and their corresponding storytelling elements. From rushing to support the apparent fall of Cadia to seeking revenge on those who would do you wrong, each mission is structured well and follows a comfortable crescendo of events leading to some great moments throughout each race’s playthrough. The cinematic in-game cutscenes mixed with the almost comic-book like scenes that act as filler between the action blend well together and help set the atmosphere quite well. While there is plenty to read throughout the campaign, the voice acting, of which there is aplenty, is absolutely top-notch; the cast that Tindalos put together brings some excellent energy to Armada 2. 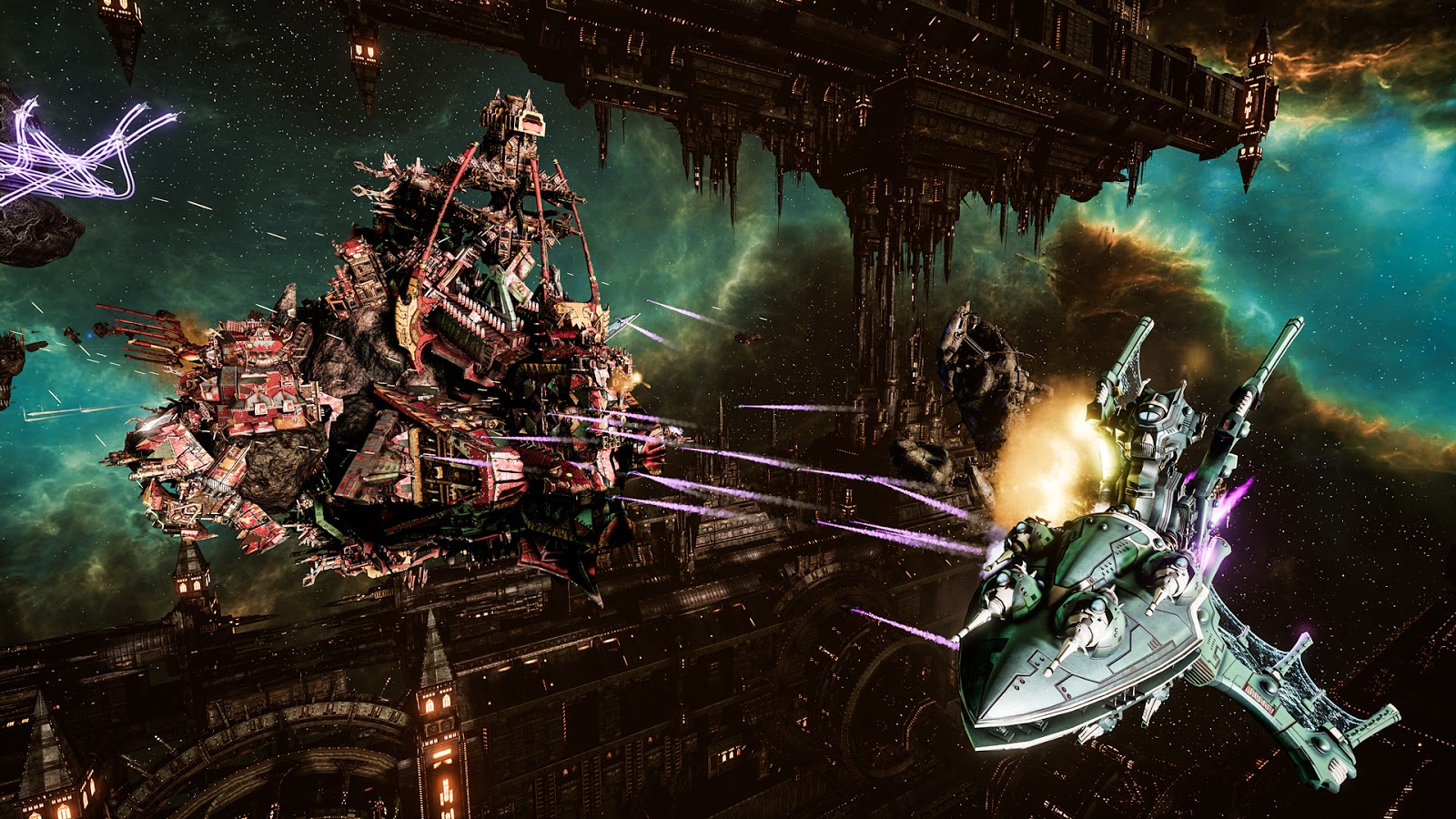 For those that might have skipped out on the first Battlefleet Gothic Armada that is okay (it really was a rather bland game that brought little to the table) as Gothic Armada 2 can easily be played without having experienced the first. If we were to break it down to super simple terms, BGA2 is a realtime strategy game full of units with special, almost hero-like abilities that you control on a 2D plane set in space around Cadia. As you progress through the story more ships will be unlocked, which you can then build / order between missions, that have more unique or specialized roles. These ships are bought with points, no different than how they would be if you were playing the actual Warhammer 40k tabletop game, which I thought was a nice touch.

Once you have your fleet put together you move on to the missions, which tend to be full of explosions and ships careening into one another. Where unit collisions in many other strategy / RTS titles are simply handled by atypical model collision (i.e. they just sort of bump into one another and then move about their day), in BGA2 it acts as an actual attack. That’s right folks … you can set thrusters to full power, brace for impact, then ram the son of a … You know what I mean. The battering ram aspect of BGA2 just refuses to get old, especially if you can sandwich an enemy ship between two of your own … It is an incredibly difficult move to pull off, and risky since you can damage your own ship (catastrophically I might add) since friendly fire is a thing here, but if it actually hits, the damage is intense. 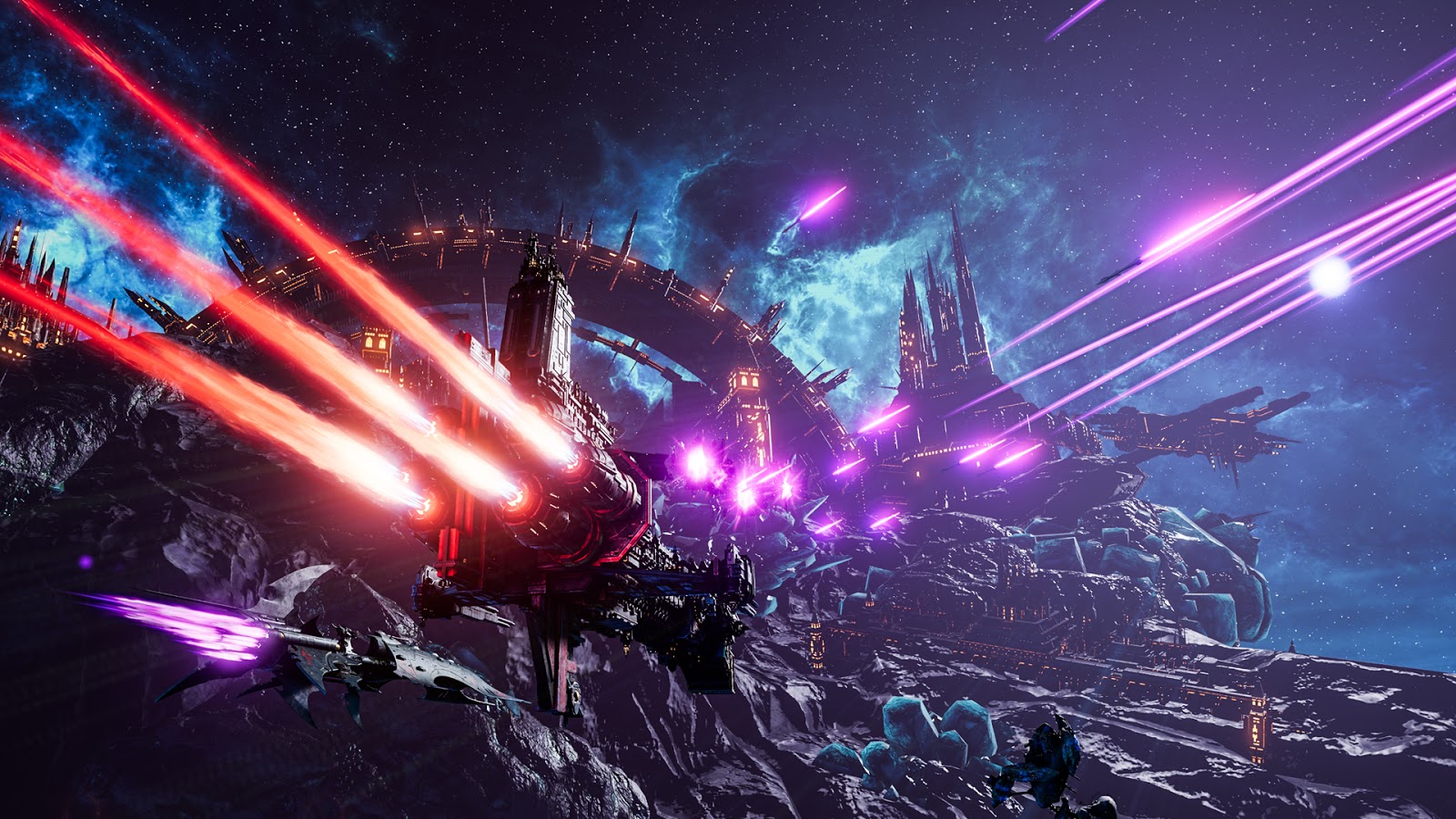 Something else to get used to here is that there are few homing weapons in BGA2 so that means you need to do a bit of predictive mathematics on the fly and fire your weapons at where the enemy is going to be. For me it was far, far easier to simply close distance, do what I can to ram the hell out of the enemy ship, then while turning for maneuvers, simply broadside the bejeezus out of them. This resulted in some super great explosions… and a lot of restarts on my case because I would get a little overzealous for the Emperor and it would result in massive damage to my fleet, something I could not recover from.

Restarts are okay though, since the ships are absolutely stunning. True to form, the Imperium of Man’s ships are hulking citadels built on thrusters that have had turrets welded onto them; in fact they are some of the best looking Warhammer 40,000 models I have seen to date. I would do naughty things for a free-flowing camera mod that would allow me to take grandiose pictures of my Imperial navy… Necron ships are equally impressive, though I have always gotten a bit of a Ferengi feel from them and that just ruins the gravity of that particular race. Tyranid ships are easily the most interesting, with their organic composition and the fact that each ship is uniquely animated; in fact some look downright creepy. I love it.

There are a great many moments in Battlefleet Gothic Armada 2 that can be both frustrating AND exhilarating and the distinction can be found in little moments; from that first successful battering ram to placing all of your hope on a long-range shot that misses by just a hair, these moments are numerous and welcome. While my heart still aches for a Warhammer 40,000: Dawn of War (the first one) in space, with hundreds of spacefaring units on screen, smashing and bashing and crashing, Battlefleet Gothic Armada 2 is a pleasant substitute. With its gorgeous models, bountiful explosions, excellent sound design and voice acting, and an interesting story for each of its campaigns, Battlefleet Gothic Armada 2 is a worthy entrance into the very small cadre of excellent Warhammer 40,000 titles. Well done Tindalos and Focus Home, well done indeed.