You are reading
Eternity: The Last Unicorn – PS4 Review

Eternity: The Last Unicorn is a throwback RPG to the early days of the PS1, 2 and the Xbox. While searching for a remedy to cure the last of the Unicorns, and preserve the Elven immortality, the High Elf Aurehen from Alheim will cross paths with the warrior Bior from Midgard as the two follow their own adventures through the Norse realms.

From the beginning of this adventure, I want to state how gorgeous everything is. The environments are rich with colors and details making it a wonderful visual presentation. More than this, what impressed me the most was that Aurehen, a beautiful Elven maiden, is actually wearing damned clothes! Now I know how ridiculous that statement could be but in all seriousness, look at Elves in gaming and tell me where the females actually have proper wardrobes. Book of Unwritten Tales, they fixed it in the second, and Hunted: The Demon’s Forge are the ones that immediately stick out to me. Aurehen is dressed like she’s out on and adventure, her belt hooks on keys, magical devices and her sword. Finally, someone got it right!

From there though… things are bit downhill which is unfortunate because Eternity has all of the elements to make for a great title. Coming from Brazilian developers Void Studios, Eternity is their very first game and they set out to make something that would feel natural to long time gamers like myself that have played older titles especially like either Resident Evil or Onimusha (still on my to-do list). The camera angles are fixed which means you need to carefully examine your surroundings as you move forward because the view that you currently have is the only one that you’re going to get. And while it works, where it crumbles is when the fighting starts and your camera angles are what get you killed again and again. 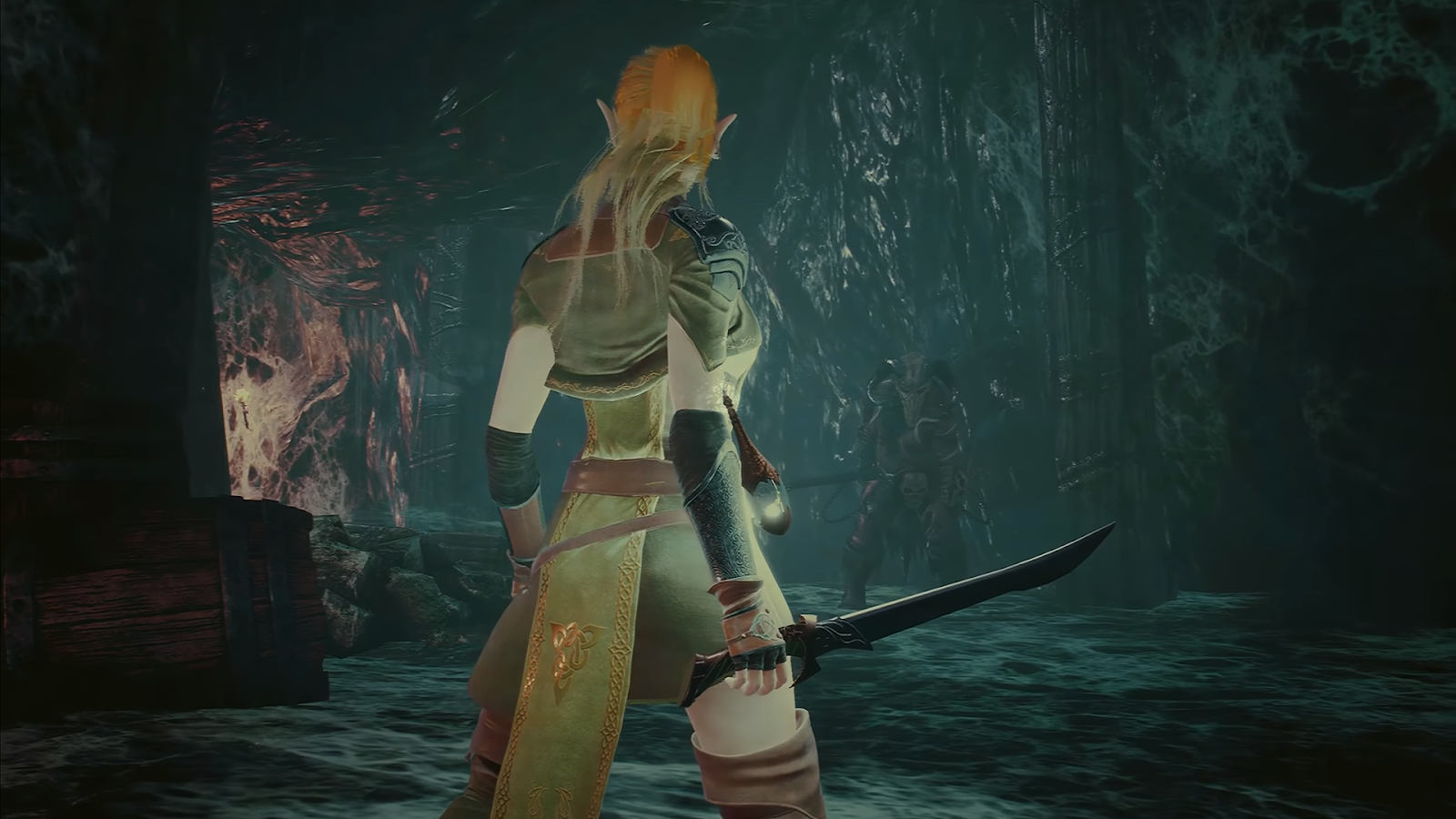 Combat is simply brutal to be brutal. Enemies can basically kill either of your characters the second that they come into being if you’re standing too close to where they appear. I’ve seriously loaded back up from a checkpoint dozens of times over to simply that aspect without even counting the amount of times that I died because the enemy just smacked me as I missed a dodge.

The above is only made worse as often you’ll be fighting enemies in two to three camera angles because you simply cannot take a hit from the beings trying to kill you so you keep moving back. In a horror title such as Resident Evil this invoked a sense of fear because you had no idea how far behind they were or what was beyond that corner. In Eternity this invoked frustration as enemies have points of how far they’ll go and sometimes they’ll cross screens while others they’ll simply lay in wait at that crossing point for your camera and kill you all over again.

Eternity is an RPG and as you defeat enemies you get experience points and loot for crafting. The second part allows you to make quest and healing items but the first? I have no idea what the point of leveling up was sometimes as you didn’t really seem to get more attack of defense as you still does just as fast and the damage you could deal was utterly dependent on where you hit your enemy. Making things worse in this avenue is that the second that you leave an area, your enemies respawn. Both big and small as well as all of the waves that came at you before. Every. Single. Time. As this is an adventure and you need to find your way through the various maps in the various locations, you’ll be fighting A LOT. And since enemies can simply stomp you seconds within appearing I honestly felt like I was playing Demon’s Souls on hard mode which is already bloody hard as I still haven’t managed to finish it unlike the rest of that series and it’s spinoffs.

So with all the dying, you eventually really start to notice the lengthy enough load times. Once an area isn’t bad but as you keep dying and need to reload, it adds up and may even match Bloodborne in its earlier days. Adding to this is that there are still some game crashing bugs in which talking to an NPC or trying to open a chest will simply freeze the game essentially making you lose all the progress that you just completed because the checkpoint didn’t kick in and you were far enough from the save point.

So while a lot of the elements were there in order to create a stellar throwback RPG with nods to some rather great titles for their time, Eternity: The Last Unicorn missed that mark due to some of those design choices and the performance issues. With a bit more work and balancing though, as it’s never too late, Void Studios still have a chance to fix a good chunk of these issues and I would be more than glad to revisit this title once they do.