You are reading
The Princess Guide – PS4 Review

You know how in movies, games, or books, whenever there’s a war going on there’s always one fighter that makes or breaks the battle? You ever wanted to be that one fighter? To beat up tons of monsters or enemies, to command a unit, go on adventures, re-purpose local traps for your own units or teach princesses how to conquer the world? Well then, it’s a good thing we have “The Princess Guide”.

In The Princess Guide you take on the role of a nameless knight (or rather you name them) who has fought in many battles, and has felled many a strong beast. Apparently you’ve also written a few books, including a tourist guide. Feeling as though you wish for something more than just battle in your life, you decide to branch out, and become an instructor! Incidentally, the four princesses of the world have requested for an instructor, and they all have…shall we say, unique, personalities. You start your adventure by picking what you Knight of LegendTM looks like, with a bunch of options for gender, voice, personality, and visual appearance. Although most of it won’t really mean a whole lot to you when you first start, your choices do actually affect your commander, albeit just the personality, as far as I’m aware.

You may then choose which princess you’d like to start off with, colour coded for your convenience. You have Liliarte, the blue glutinous warrior princess, Veronica, the red witch of destruction and overtime pay, Monomaria, the yellow destitute mercenary princess, and Alpana, the green sadist dragon princess-nun-saint-or-such princess. Being the man of action that I am, I chose blue, because it was the default option. You start out with an introduction to the princess you’ve chosen, and then cycle through them all once before you’re asked to choose which one you’d like to stick it out with. 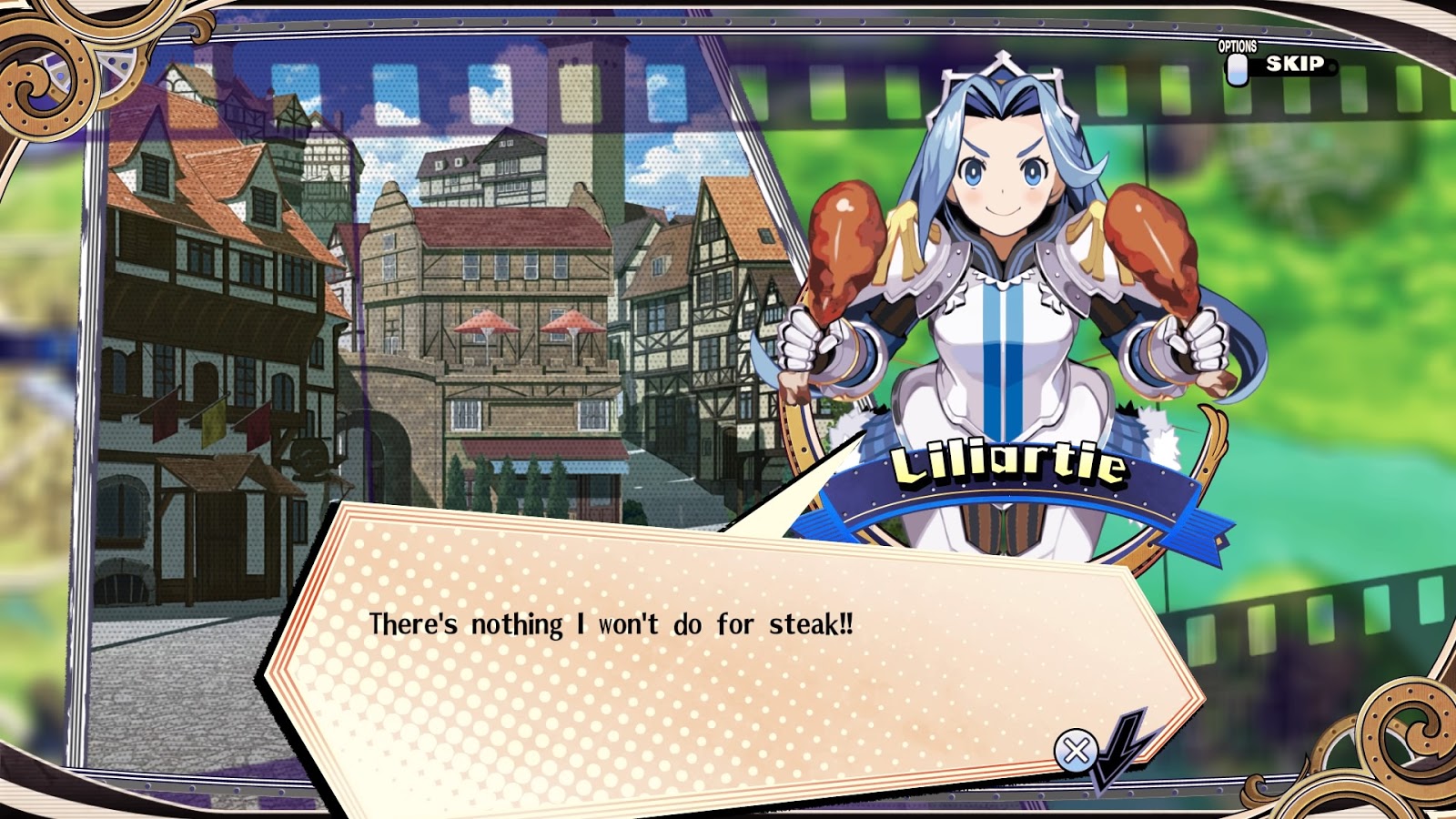 This is really nice for giving you a glimpse at each character before locking you into a route, and you get to play as all of them at least once. It also helps that you retain experience for your commander and equipment when swapping over, so you’re literally given a power-level stick after the first princess, which is nice to keep the game flowing, but isn’t so overpowered that the end of the scenario is a cake walk either. There’s multiple endings, post-game content, and a new game plus option, so there’s a lot of room for re-playability as well.

So how does Princess Guide actually play? That’s a question I was struggling with a bit early on. Essentially, instead of teaching the princesses politics or manners (especially not manners), it’s your job to teach them how to fight, and common sense. Especially common sense. Gameplay is a weird combination of three different styles.

The first is a top-down brawler type combat, where you take a squad of up to three pairs (or six units, if you will) with you into a “mission”, and you walk around the map beating up baddies, or ordering your units to do it for you. You can also have them help you “capture” relics, which are basically Indiana Jones style traps, that when captured act on your behalf, instead of the enemies. It takes time to capture them, and they’re generally limited use, but they can definitely turn a battle around for you. Maps tend to be fairly small, and you only have a 15 minute limit to complete them in, so until you hit the bonus dungeon that was about 5 floors deeper than I was expecting it to be, the time limit isn’t much of an issue. 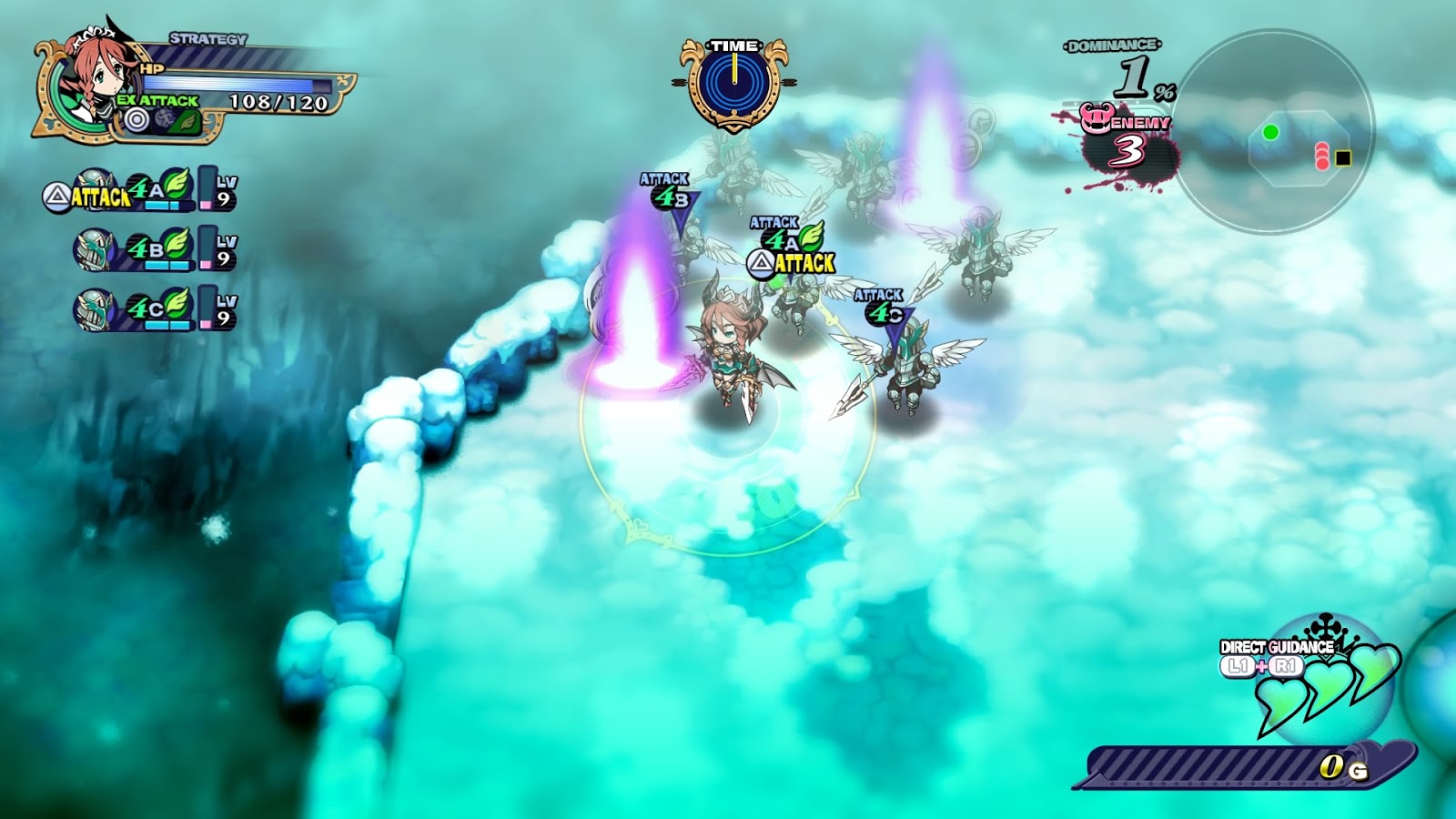 Your second style is a sort of unit management deal, where you have nodes on a grid and can deploy units from your home base to walk around the map. If you walk into a monster icon, battle begins. It’s important to note that time passes in “hours” while in this map mode, and some missions are on a limited timer. You can deploy as many squads as you have commanders for, and can withdraw to the home base from anywhere, but you need to wait five in game “hours” to re-deploy. Thankfully there’s a “speed up” button that makes it more like 5 seconds. Something to note is that if your units die in battle, while their levels are “carried over”, neither you nor the units with you heal after battle, you keep that health, until you withdraw. If you lose a full set of units under your command, you’ll have to re-hire them for a price (a small price mind you), although their levels will be the same.

The last style dealt with is a sort of management/grooming sim, where you manage your squadrons and teach your princess. How do you teach her? Well, there’s a rather complicated yet straightforward process for that. As you perform certain tasks, such as defeating certain enemy types or progressing through the story, you unlock “titles”. These titles must then be “learned”, through either the “motivation” system, or by meeting some objective in a mission.

Objectives range from completing a mission within a certain time limit, to beating a certain type of enemy, or maybe even “killing x number of enemies using a captured relic”. The ones obtained from the motivation system are gained through “verbal reinforcement” during a mission. Basically, three times during a mission you can scold or praise the princess. Depending on the situation, this gives different buffs, and increases learning for what I call the “passive” title. You also have points during the story where you can scold/praise the princesses as well, and each will react differently and earn different title exp depending on response timing. You can only have one title of each type equipped at a time, but they can be swapped in the base menu, and they automatically change to the next in line upon being learnt, which is super handy if you want to leanr more than two titles per mission. 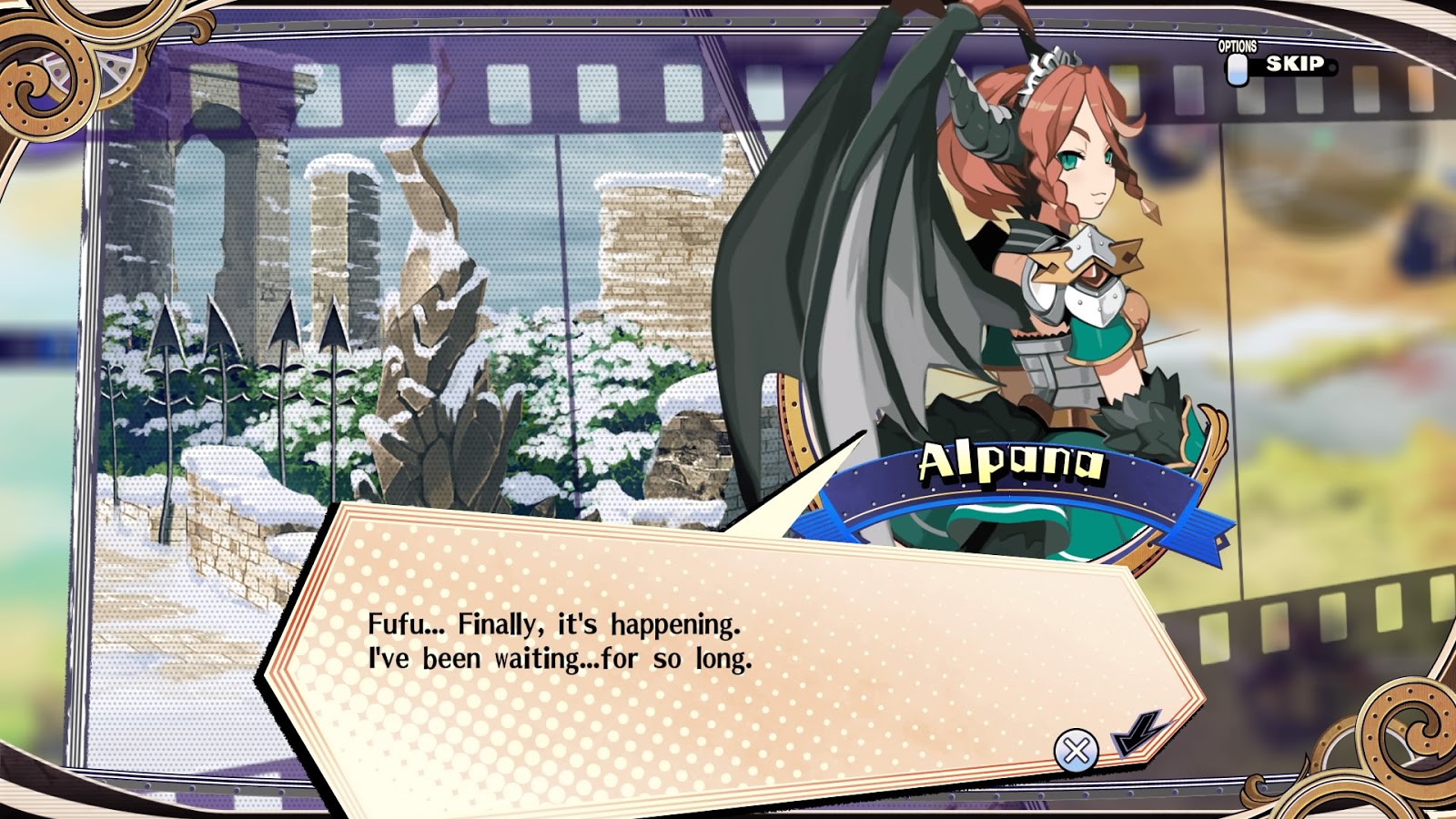 Now that you know how to earn, and learn, a title, it’s time to use the title. Yes, you have to use titles. This is the part that confused me, as well as when first introduced to titles, I had no idea the difference between the combat related and praise/scold related titles. In the base menu, as long as the princess isn’t deployed, you can go to the “princess training” option, which has Training, Knowledge material (what I’ve referred to as “titles”), virtual training, and diary.

The diary is basically a mini synopsis and character reference, but nothing too fancy. Virtual training is a (mostly) fun 8-bit style minigame, of which there are three different types, one for each princess, except blue and green share the same type. I found them really fun, and you do earn item, titles, and money for completing them, but I swear, if I see another godsdamned dumbbell again I’m gonna punch somebody. Either way, to train your princess, she needs to have a certain level of “learning capacity”, which is indicated by a heart split in three sections. Different ranked titles have different capacity requirements, and will consume that capacity.

Capacity is then earned by completing story related missions. Big thing to note here is that the little number symbol near the heart with the plus sign means that’s how many more full heart symbols of capacity you have left. This totally confused me at first, because I didn’t notice it and then learned more title than I thought I had the capacity for. Each title comes with different stat points, and teaching said title increases the associated stat. At set benchmarks, the princess will learn a new skill, or have new units become requitable. This is also how you upgrade “yourself”, as each taught title earns you stat points for your “personal” commander, that you can use to enhance stats like defense or attack. 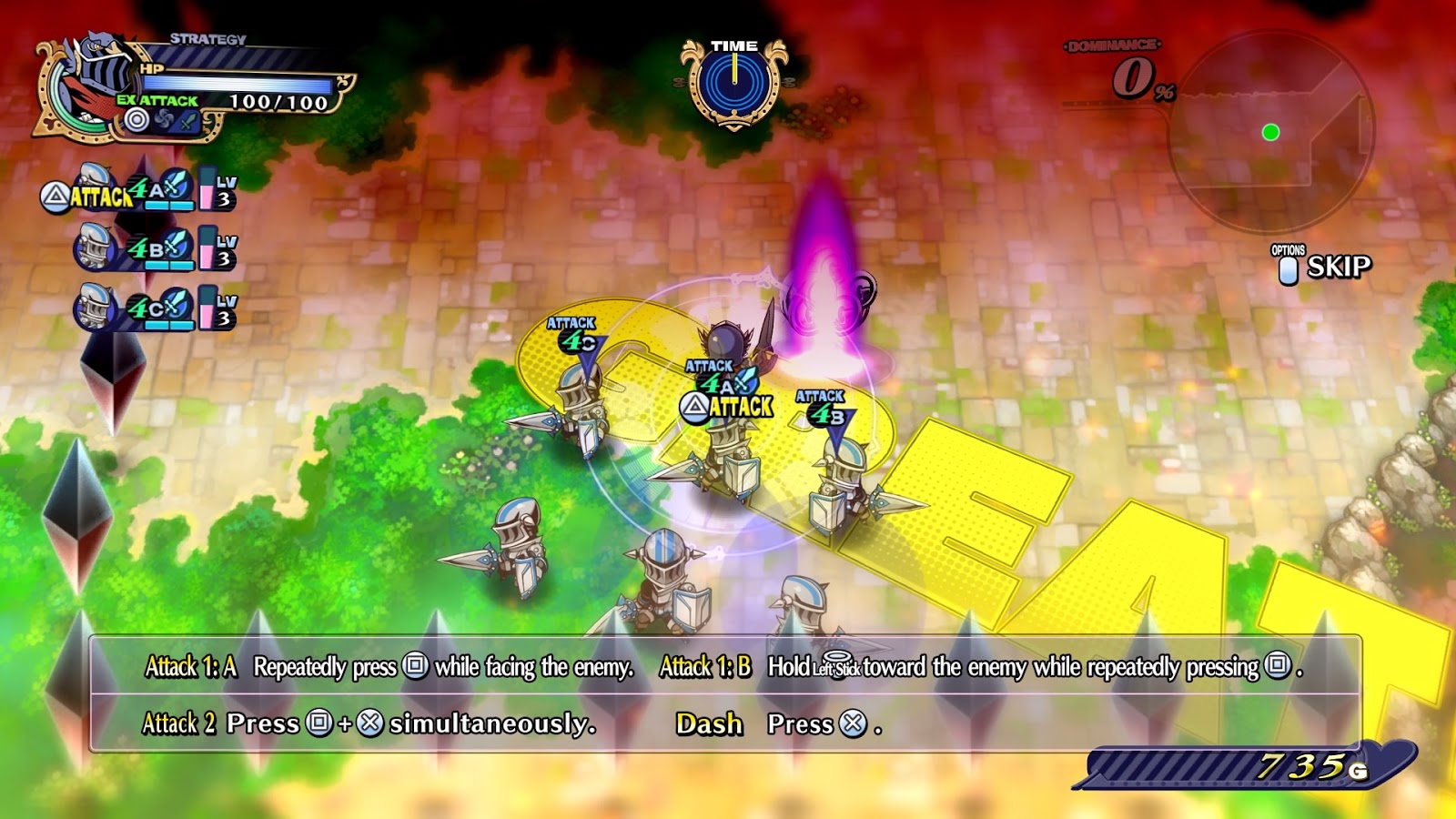 The music was a lot more catchy than I had anticipated, and the graphics were pretty sharp in the usual JRPG anime style portraits and landscapes. One serious complaint I have is how…dynamic the character portraits are. Everytime someone talks, they bounce around like someone put them in a paint shaker, which I found to be super annoying. Some missions are rather infuriating due to the time limit, especially if they spawn on the other side of a large map and you need to drag your butt over there before they disappear.

Also, towards the end of the game the map spawns a ridiculous amount of monster tokens, and although they’re super easy to beat, they are a pain in the butt to be certain. A handy feature the developpers added is the “training” missions that become permanent fixtures on the map, and allow you to replay a random stage you’ve been through. Perfect when training new recruits or trying to learn a title with a specific enemy/relic requirement.

Overall I enjoyed Princess Guide more than I was expecting, which is definitely a good thing. Are there some issues with the game? Yes, but not to the level that makes it unplayable or seriously detracts from the gameplay. The stages can get a little repetitive at times, and I would have liked the sub-missions to not appear at the worst timing possible, but it isn’t too bad unless you plan on marathoning it. Which brings up the major thing I kept thinking of whenever I played: “this would be good on a handheld”. I played this on the PS4, but I really felt as if it would lend itself a lot better to something like a Vita or DS, where you can play for a bit, then leave it in standby for a bit. This is probably a bit better on the Switch, since it can actually function as a sort of handheld. Despite these issues, I did have fun playing.

While The Princess Guide has an interesting concept, and the systems meshed rather nicely when I got used to them, there are some points that need a more in-depth tutorial, or at least an accessible tutorial after you’ve seen it, instead of having to start a new game to re-read something you missed. It may not be anything that’s redefining the genre, but I certainly wasn’t disappointed either.