Hell Warders is the latest in the Action RPG Tower Defense genre to grace PCs and Consoles alike for Hacking and Slashing hordes of enemies that would see your core nexus, and you, destroyed. Equipped with swords, guns and hammers, you and a friend can launch into chaotic mayhem as you fight to protect what is left of a Kingdom after the initial onslaught.

Now right from the get go there’s going to be a visual sense of familiarity as Hell Warders looks an awful like it could have been called Dark Souls: The Tower Defense. The warrior looks like the Ashen Knight from Dark Souls 3, the ranger looks like a Bloodborne Hunter, and the brawny warrior looks like Lord Gwyn from Dark Souls. Even visually the entire experience looks like it’s right out of certain areas of the Souls series with sound effects that also invoked feelings of Demon’s Souls. Compared to that however I just wish the rest of the experience was as smooth.

Because it was the first of its kind years ago, and we won’t talk about the second or the fact that the studio is going to Kickstarter to restart the series on their own, Dungeon Defenders was allowed to make a fair amount of mistakes as it created a new genre for gamers as it ironed out the kinks. Combining action RPG elements with a tower defense, you now had two wholly separate gameplay modes in a single title so if you got bored of waiting for your enemies, you could go meet them in battle. Hell Warders continues on with this style but instead of cute and cartoony it went for dark and gothic and visually it looks great. The character models look good, the enemy models, which while invoking more of the souls feeling, look good, and your “towers” look good as they are summoned units onto the field that will fight the enemy alongside you. 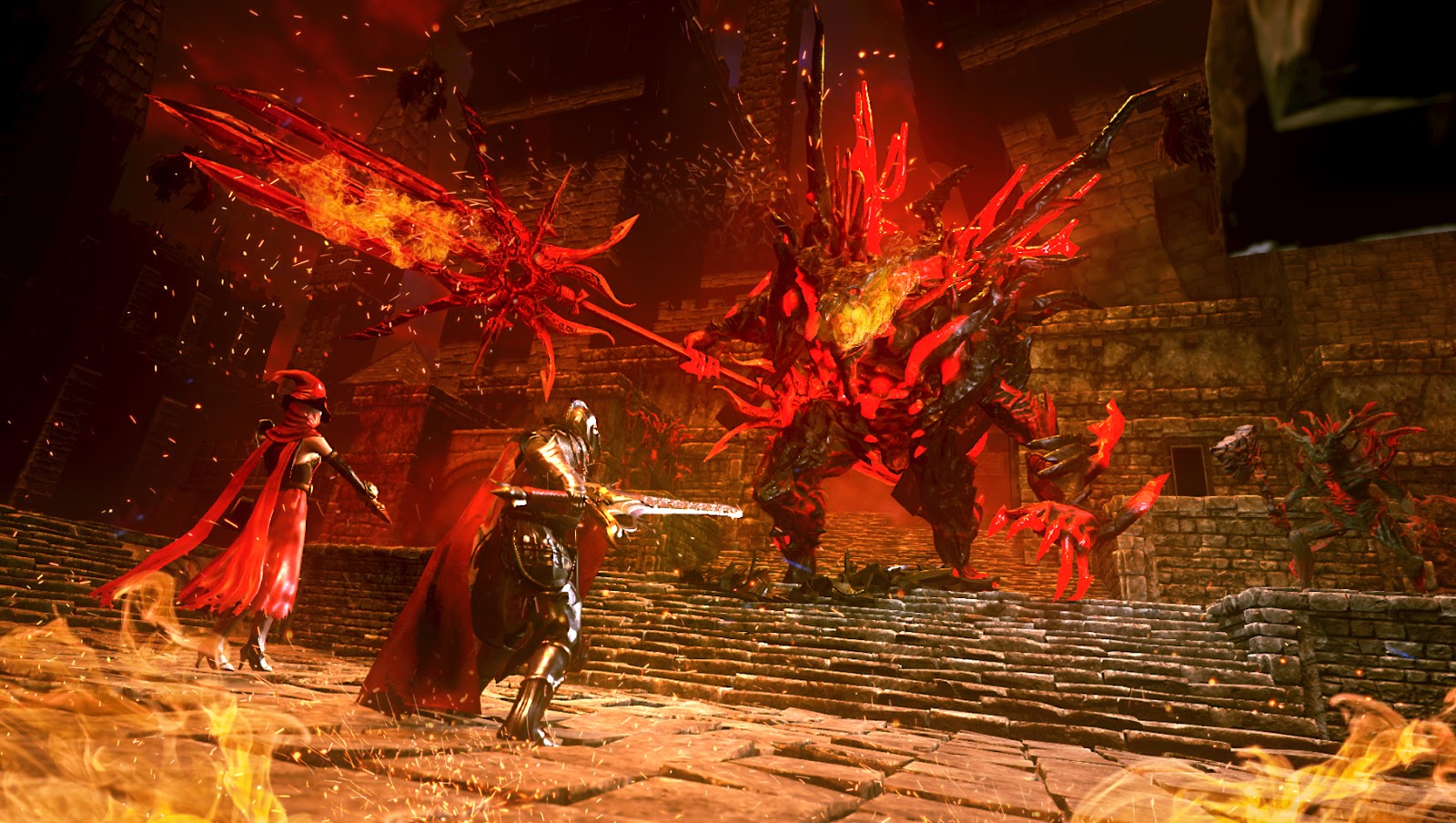 These units are an interesting twist on the genre. Other than your basic Pikemen that will charge forward, often AWAY from their support, the rest are pretty stationary and will only really move if a giant foe bats them out of the way. What’s interesting about the fact that these are units, and thus people, don’t take up as much room as giant mechanical contraptions would. So if an enemy really doesn’t seem to care about your healer trying to keep the rest of your troops alive, it’ll simply bypass it as it continues onto it’s actual mission. Mages will often be targets because of how much damage they do and the obvious first to go would be your pikemen since they are literally running up to stab your enemy the second they are within aggro range.

Placing the units themselves is going to require both a point on the total unit count meter as well as the currency to summon them. Pikemen for example are cheap and only cost one-hundred while ballistas are expensive and cost twelve. Mages and your archers are not cheap either so figuring out a good balance to cover your bases is important especially when the enemy will be coming at you from multiple different angles. Summoning them into place is easy enough however if you make a mistake as to where you wanted to put them, then you’ll have to de-summon them which is basically like killing them but you get the investments back as long as it’s between waves.

This is about where things start to go downhill. Hell Warders is clunky on a console and it’s rare for me to say, but I think it would have felt more at home on a PC with the WASD keys of a keyboard and a mouse. The way in which your character moves is reminiscent of a first person shooter as you move around in a third person setting. Moving left or right must be done with the right joystick as moving left or right with the left will cause you to strafe. If you want to attack and use your special abilities, you’ll have to use the shoulders and the triggers because otherwise you’ll constantly be attacking in the wrong direction as long as you’re not moving both joysticks. Even after several hours I was still not exactly used to the controls and finally opted for the ranged attacker because at these those controls felt more natural because I was aiming guns and now a sword or a hammer. Also, for every attack you have to click the “Y” Button or the L2… ZR? Back right trigger on whatever console you’re playing off of. 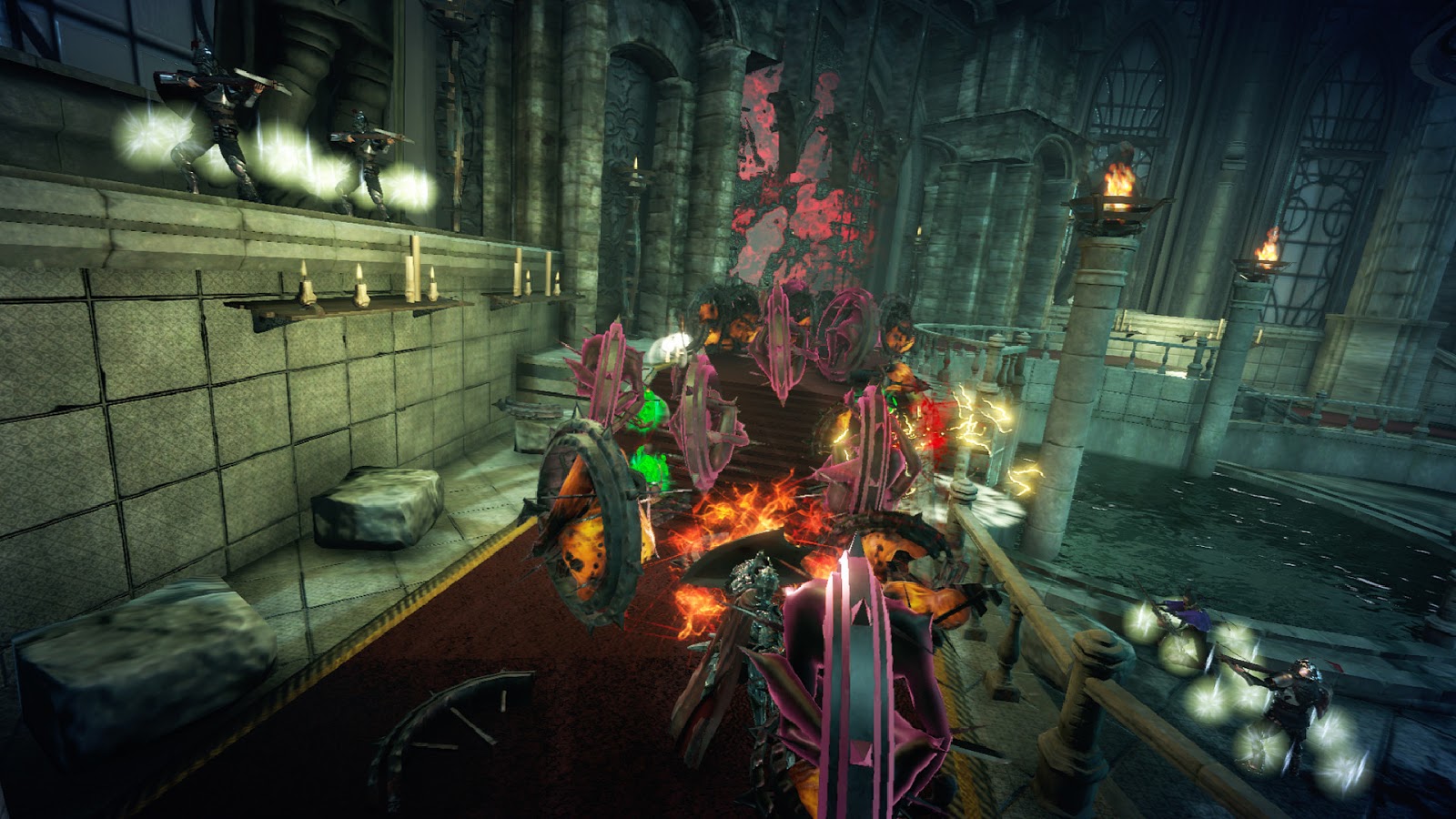 On the note of combat, it feels… lacking. You swing or shoot standard attacks and you have two special abilities on cooldowns. That’s it. You never really get anything else from there and half the time, especially in melee, using those attacks is more apt to get you killed than it is to be of any real use which is unfortunate since the style requires you to be in the midsts of the fray. This leads me to my second issue, there’s no real middle ground. Either you’ll be powerful enough to destroy your enemy or they’ll simply walk right over or through you to your Nexus and it’s game over. If there’s a style of gameplay that I excel at it’s this one. I love the planning and the trying out of different maneuvers and you need the tenacity as failure is often expected. But it took me a week of frustrations to get through world two stage four. A. WEEK.

The reason for this isn’t the stage design or the enemy paths as they move towards your nexus. The reason is that you are introduced to your typical juggernaut that needs magic attacks to harm him as he’s basically weiling two giant tower shields as he marches forwards. In normal times this is easily circumvented as you can get behind the lumbering beast and hack him where he isn’t holding shields to protect himself. Except that you can’t. First, there are just too many enemies and they’ll kill you first. Secondly, it takes no damage unless you’re using one of the two special attacks that just so happens to count as fire damage. It really becomes mechanically “unfair” and there’s no real way to tackle it other than loads of trial and errors as you hope to squeak past this stage and come back later more powerful in order to ace it. 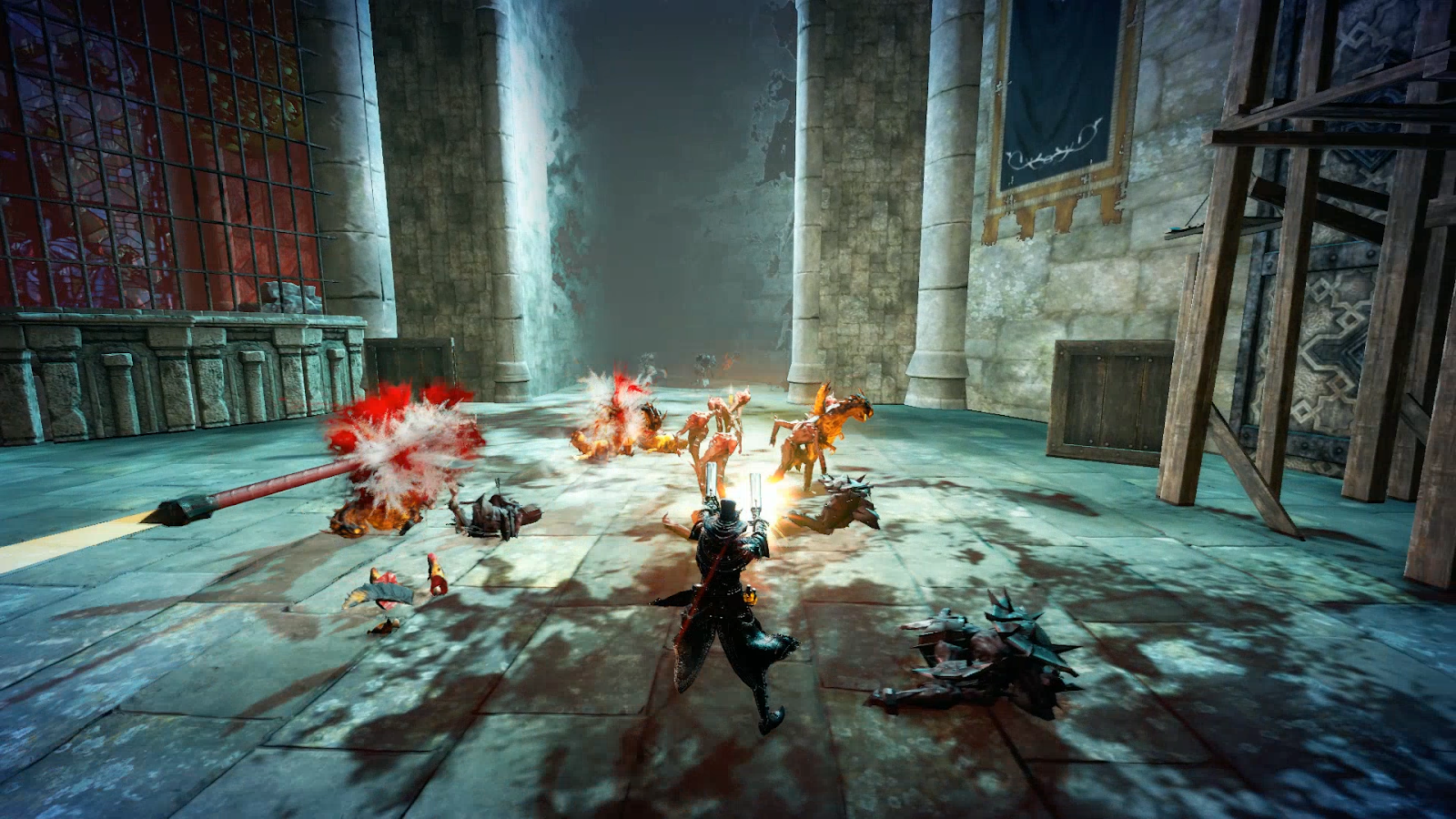 Here’s another element that both made things different but also limited an overall “progression” if you were not good enough. Performance on a stage, overall making sure that your Nexus isn’t hit, will net you five points to be distributed to either character stats or overall unit stats. Each point can increase attack, attack rates, health, cooldowns essentially leveling up your forces. Make a mistake, reset the points either in one go or by individual points. This part worked great. Getting the points however? Well if you sucked, you didn’t get much and until you ace a stage, you won’t unlock new units as those are behind a 100% completion rate instead of simply allowing you to complete a stage making things so much harder if you’re stumped as there’s no way to grind your way through in the traditional RPG fashion for experience and loot as there isn’t any.

Finally the performance and the optimization was not the best. Killer load times were only made worse with getting stuck on a loading screen and having to shut down the game in order to start all over again. Furthermore, the controls are set as a default for anyone who would be on a PS4 or an XB1. Your “ok” and “cancel” are reversed and often because of the input lag of the menus you are left wondering why nothing happened as nothing is moving.

Overall Hell Warders has some good ideas and visually looks great but the mechanics are just not there. Also plagued by performance issues and horrible load times, I’m looking forward to future versions which could solve some of the above to make it a bit smoother as I would honestly love to see it succeed as the ideas behind it were good ones