Tokyo School life is a slice of life about school life in Tokyo. Too literal? Well, it really is a game perfectly described by the title. In a rather unique turn of events, Tokyo School Life is a dating sim that doesn’t actually feel like one, much to its credit.

In Tokyo School Life you play as surprisingly non-generic protagonist “insert name here” (default John Smith). John Smith is a super weeb, and his biggest dream is to visit Japan, pick up all the manga/anime merchandise, and date a couple of Japanese beauties while he’s there. Cue him immediately invoking the trope of running into a girl and getting a good grope as soon as his plane lands, pretty much. You’re then introduced to your three heroines: the spunky big boobed one, the frail traditional Japanese beauty, and the sporty short one. Super cliché, right?

Well, apart from a few smaller instances, surprisingly not. The heroines aren’t exactly super eager to fall all over you, and they each have their own personalities that vary from the traditional: Karin, the busty one, is secretly an idol, Sakura, the frail one, is actually a super big otaku, and the sporty one is a martial arts drill sergeant. Even the faceless protagonist drops the stereotypical act pretty quickly, and it ends up feeling less like you’re a part of a dating sim and more like you’re getting a surprisingly in-depth guide around Japanese customs and food etc. It was actually quite refreshing to see. 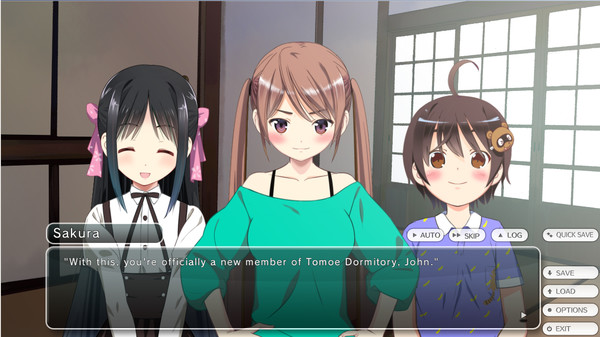 Like pretty much all of its kin, Tokyo School Life basically has you just reading and making choices to increase affection with the girls around you, although what options associate to who’s affection is pretty obvious. An interesting thing the developers did was have any button, including thumbstick movement, associate with the “next” button. This is interesting, because it means I can flick the thumbstick to progress the text, or I can drop the controller and skip about 20 lines by accident.

I will admit that I’ve played through my fair share of visual novels, some great, some bad, most having some sort of romanceable target, some only having romanceable targets and others somewhere in the middle that I’m not even sure about to this day. So take my word for it that to get get me genuinely invested in a character or storyline, they really have to have something going for them. The characters in Tokyo School Life did not, which is exactly why I ended up invested in them. 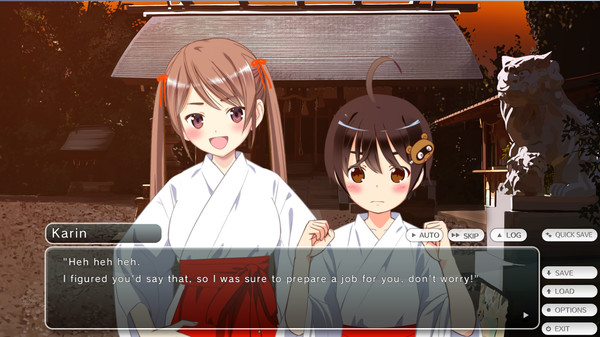 The three girls you interact with don’t instantly fall for you, they shoot you down for being a moron, they each do their own thing without really caring about you, and they all have some seriously reasonable worries/personality traits. Unlike a lot of these types of games, where you solve a characters “my parents are dead and/or abusive” problems, the girls in Tokyo School Life feel like normal people. Accented by the fancy little group chats that happen between the three girls occasionally, where they discuss what happened that day and how they feel about the dumb foreigner. And yes, you/he gets called dumb quite often.

The art style was both typical and not at the same time. You’ve got the standard anime stylized characters, but they’re dynamic and expressive, and change facial expressions mid text box, which I want to see so many more games doing. Speaking of art, the backgrounds look like pictures of actual places with an “art filter” applied to them, which was really cool.

Overall, Tokyo School Life felt less like a dating sim and more like an interactive guide/tour, which I found to be rather refreshing. While full of tropes, they're mostly played off of or deconstructed, which is great to see them not being relied upon. The characters were rather interesting, and the scenario wasn't overdone or underhashed. While maybe lacking in the "oomph" factor that would give it that last little push it needs, it's definitely a solid experience that won't leave you annoyed or displeased with the characters or a generic storyline, or an overdone storyline to cover up lack of content, none of that is had here.