You are reading
Darkwatch – Retro Reflection

As a fan of western movies, shooters and vampire stories Darkwatch was a “must have” game on XBOX. The story is about an outlaw who attempts to rob a train and accidentally releases a vampire that was being transported in it. The monster soon wreaks havoc in the land and the hero unwillingly accepts the responsibility to stop it; during his quest he is led by a virtuous woman who belongs to a sect dedicated to hunting supernatural threats. 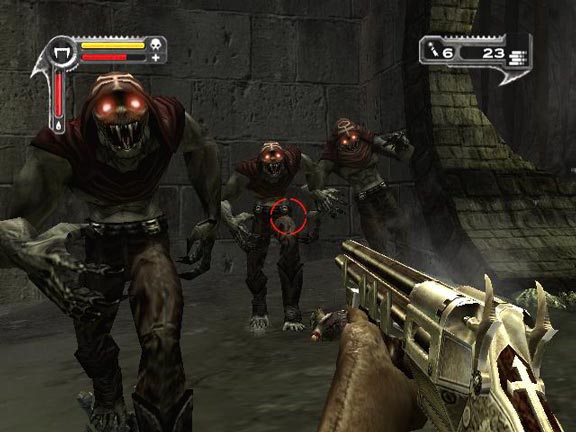 This is a traditional first person shooter that is set apart by its dark atmosphere and the protagonist’s special abilities. Those include a regenerating shield that functions as armor, a super high jump and two sets of magical skills, “light” and “dark”. I chose the light skills, which include increased bullet damage, limited time invulnerability, lightning bolts and a spell that scares enemies away. They are all effective and fun. The super jump is great too, as you reach distant platforms many feet above the ground. Generally, your special abilities make you feel like a supernatural being, which is cool.

Guns available include a rifle that is good for most occasions, a crossbow which shoots exploding bolts, a sniper rifle and twin pistols that become devastating if you keep the fire button pressed. All weapons have a powerful melee attack, handy for close quarters combat, are well designed and dish out satisfying damage. Enemies do not present a lot of variety, however they are appropriate for the game’s theme; among others, you fight skeletons with scythes, obese things that can absorb lots of punishment and flying banshees who fire projectiles. At the end you face two demons who hurl deadly fireballs and require dozens of bullets before they return to the hell they came from; it’s a pity you have to kill the last boss though (I can’t explain why, it would be a spoiler!). 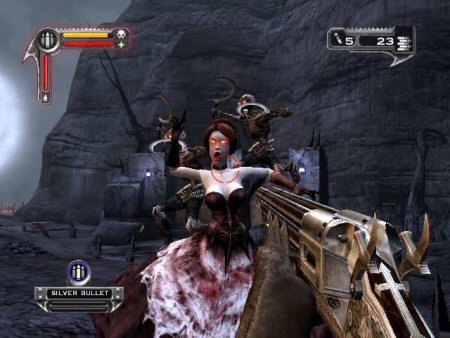 The graphics are not spectacular, however all locations, such as a mine, an abandoned fortress, a haunted town with rivers of lava, a cemetery, a canyon and an armored train create the impression you are in a Wild West subverted by the forces of evil. Concerning the sound I don’t recall anything worth mentioning and Darkwatch does not get any extra points in this domain. As for the controls and difficulty, aiming is never an issue and the game is challenging but not unfair.

If there is something I would rather change is the game’s length: when you become member of the Darkwatch (by the way, the giant rock where they hide reminds me of the vampire nest in the movie “Priest”) there should be a couple more missions and more interaction between the hero and the general as well as the captivating Talia.

In conclusion, Darkwatch is fun, atmospheric and highly playable. I recommend it to fans of shooters and horror fantasy. I am also surprised no one made a movie out of it yet; its story and setting are begging for the silver screen.