You are reading
The Wizards – Enhanced Edition – PS4 / PSVR Review

Probably the best compliment I can pay to The Wizards – Enhanced Edition, is that it feels like a fully fleshed out game, and not just a quick VR experiment like so many other action games on the platform are. The Wizards has some lofty goals in its design, and while it does not hit all of them – it does achieve most of what it sets out to accomplish.

First and foremost, the setting is a win for me. I am a fantasy guy and while virtual reality works well for horror, futuristic and contemporary shooters and so on, give me a fantasy setting every time. As such, The Wizards – Enhanced Edition strikes a positive note with me right out of the gates.

Beyond the setting, the core hook of The Wizards is its gesture-based mechanics for combat. This is not a game you put on a headset and sit back in your chair with a controller in your hands. You need a couple of move controllers, one for each hand’s movements. Visually this is represented in a style I’ve seen in a lot of other games, with a pair of disembodied hands that do a serviceable job of trying to mimic your hand placement / movement while you play the game. The campaign itself is generally structured around waves of enemies that then culminate in big boss battles with some light puzzles sprinkled in here and there along the way to vary up the pacing.

The interactive nature of the spell-casting is probably what makes The Wizards most entertaining. Of course this level of hand movement tracking is still somewhat new, and it can sometimes be a little frustrating when you feel as though you did the gesture perfectly only to have the spell fail. That quibble aside, there is something addicting to the notion of flinging fireballs with hand and arm movements is just a lot of fun. It is easy to get lost in the sights, sounds and movements. While The Wizards – Enhanced Edition is about a half dozen hours in its campaign (there is also an arena mode that can be played outside of the streamlined campaign), that time really, really flew. Visually I enjoyed what The Wizards had to offer, even though I will admit some greater variety in enemies and spells would have been appreciated. The music is fantastic, and compliments the setting and sound effects quite nicely.

This is when The Wizards – Enhanced Edition is at its best: when I was completely lost in what I was doing and time was flying by. It helps that there are collectible cards and the change-of-pace secondary objectives to help break things up. As enjoyable as the core experience is, I do have to come out and say that it is somewhat shallow. There are not a lot of enemies, you can enhance your spells but there is a somewhat limited pool of them to draw on, and by the end of the campaign I found I was using the same basic gestures for about ninety percent of the gameplay. There is definitely room here for more enemy variety, RPG progression and perhaps even modes / secondary objectives should the team take this premise and make a sequel out of it. 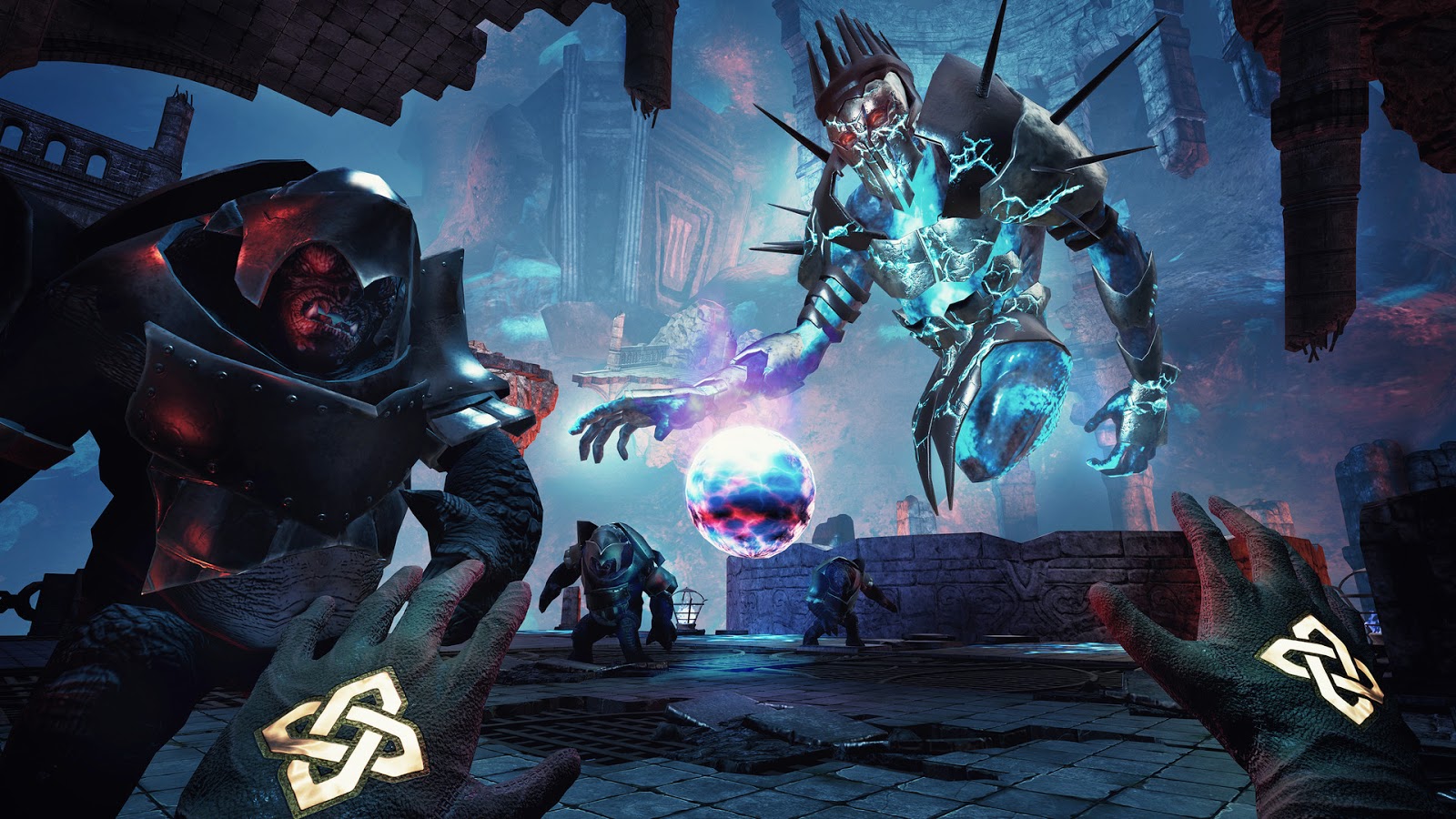 I touched on the visuals before, and the relative lack of enemy variety, but I want to call out that there is a lot that the development team gets right here as well. Like many VR games, there is a bit of stiffness in some of the character animations, but the use of colors and good texture details really make the environments in The Wizards one of the more interesting virtual reality worlds to explore. Often in VR games the textures that look good at a middle range either have terrible draw distance and / or rough appearance when you get too close to them. Overall, those were not issues in this title.

It is also nice to see some consideration put into the settings. There are a couple of ways to move about and some tweaks to the settings that can be made that help to make The Wizards – Enhanced Edition as comfortable as possible for a wide range of users. The teleportation option is nice to have, even if personally I generally prefer just walking around in VR games. By the same token, I know that my son sometimes gets a bit of VR sickness with that style of locomotion, and prefers to teleport. I always consider it a win when there’s options available.

The Wizards - Enhanced Edition is a fun virtual reality game that has more length and polish than many other VR titles on the market. The gesture-based combat is a lot of fun, even if it is not always completely precise and the presentation values are quite good as well. The combat itself can get a little repetitive however, due to lack of enemy variety and overall spells at your disposal, and the lack of modes beyond campaign and arena do limit replay value some as well. That being said, The Wizards is an entertaining experience and one that has room for growth should Carbon Studio go ahead and see fit to make a sequel, which I would definitely like to see.