Notes P.S. No, I won’t comment on the 2008 movie. How someone can mess up a film based on such a great game and starring Mila Kunis and Olga Kurylenko is beyond my comprehension.

It happens rarely in life, finding the special one. The time you spend together is unforgettable and you wish it could last forever. Max Payne is one such game!

The story is about a tough police detective who investigates the brutal murder of his wife and baby child and becomes entangled in a horrible conspiracy. It has a vivid film noir atmosphere and a captivating narration: instead of video cut-scenes the designers preferred beautiful comic book images, which appear not only at the end of each stage but also during gameplay, in the form of radio and television broadcasts or documents the hero finds. The integration of narration in gameplay is standard now but back in 2001 it was innovative. The story is simple, as Payne faces organized crime, corrupted police officers and evil businessmen with political ties, slowly approaching the ugly truth, yet, the writing style makes it stand out: Max narrates like a dramatic poet, describing events with surprising eloquence, and I sympathized with him for his suffering.

Another thing that captured my attention was the graphics quality: the texture detail is impressive, the use of shadows and light is excellent and plenty of blood is depicted when you pump hot lead into a criminal. The level design, including an underground train station, a seedy hotel, a luxurious manor and a high technology skyscraper, gives the game a rare sense of realism and makes you think you are inside a movie. Of course, there are things added for gameplay reasons, for example, a crate put at the right spot for you to climb on and move forward. I should also mention the two stages taking place inside Max’ tormented mind, which feature a unique style and architecture. The only funny thing about the graphics is the models’ expressions, which look a bit fake, although this didn’t bother me. 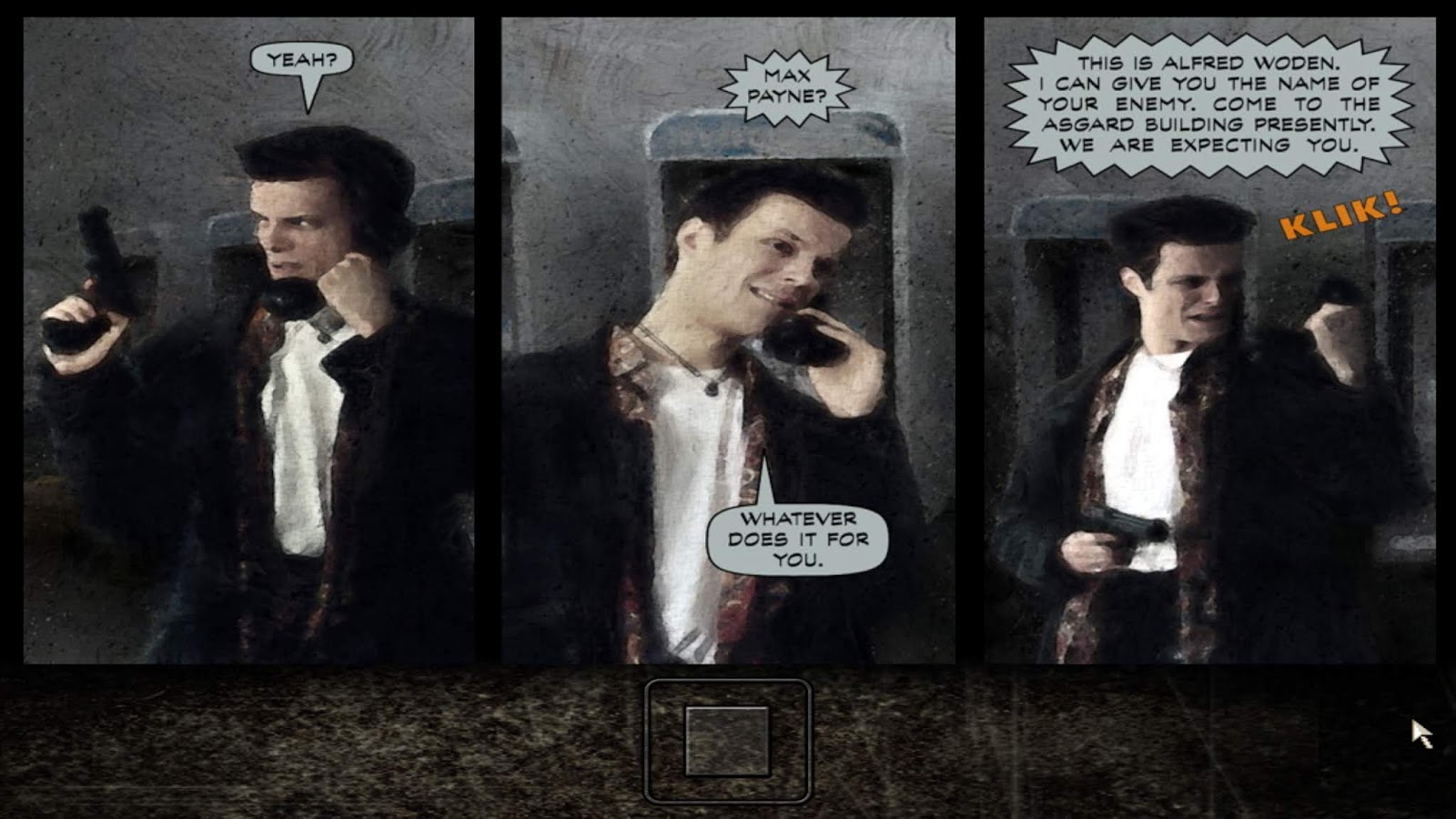 The sound effects, produced by beauties such as the Desert Eagle and the Colt assault rifle, are powerful and distinct, adding to the fun considerably. Unfortunately, there was a problem with my pc and I had no music, which is a shame. I found the soundtrack on youtube though and it is worth listening to.

Concerning the controls, you use the keyboard buttons to strafe, run, jump, roll, switch weapons, reload or interact with the environment; the mouse is for aiming/looking around, firing and activating the game’s main innovation, bullet time. The latter reminds of “Matrix”, as everything moves slower except your targeting reticle, allowing you to dodge fire and eliminate enemies a fraction of a second before they kill you. Bullet time “energy” is depleted when you use it but it is replenished by killing foes. It should be noted that this mechanism does not make the game easy, it only lets you survive situations that otherwise would be impossible; so, it is both original and smoothly implemented. Also, since this is a third person game, it is possible to move the camera and scout the area ahead without exposing yourself to danger. This way you can spot, for example, an armed guard lurking behind a corner, and avoid cheap deaths.

Naturally, gunfights are the game’s main attraction and they are as good as they could be. Nothing beats pelting a thug with dozens of bullets from your trusty Ingram or throwing him many feet away with a shotgun blast. You face dozens of armed criminals, nevertheless, every encounter feels unique, entertaining and intense. I died countless times, however, the quick save feature allowed me to complete the game. Enemies deal lots of damage very fast and are highly accurate, so, you must take cover, aim quickly and activate bullet time wisely. Although you constantly gather ammo from dead adversaries, it is crucial to save your best weapons for the more difficult situations; an extra grenade, for example, can make the difference between clearing a room instantly and dying repeatedly. 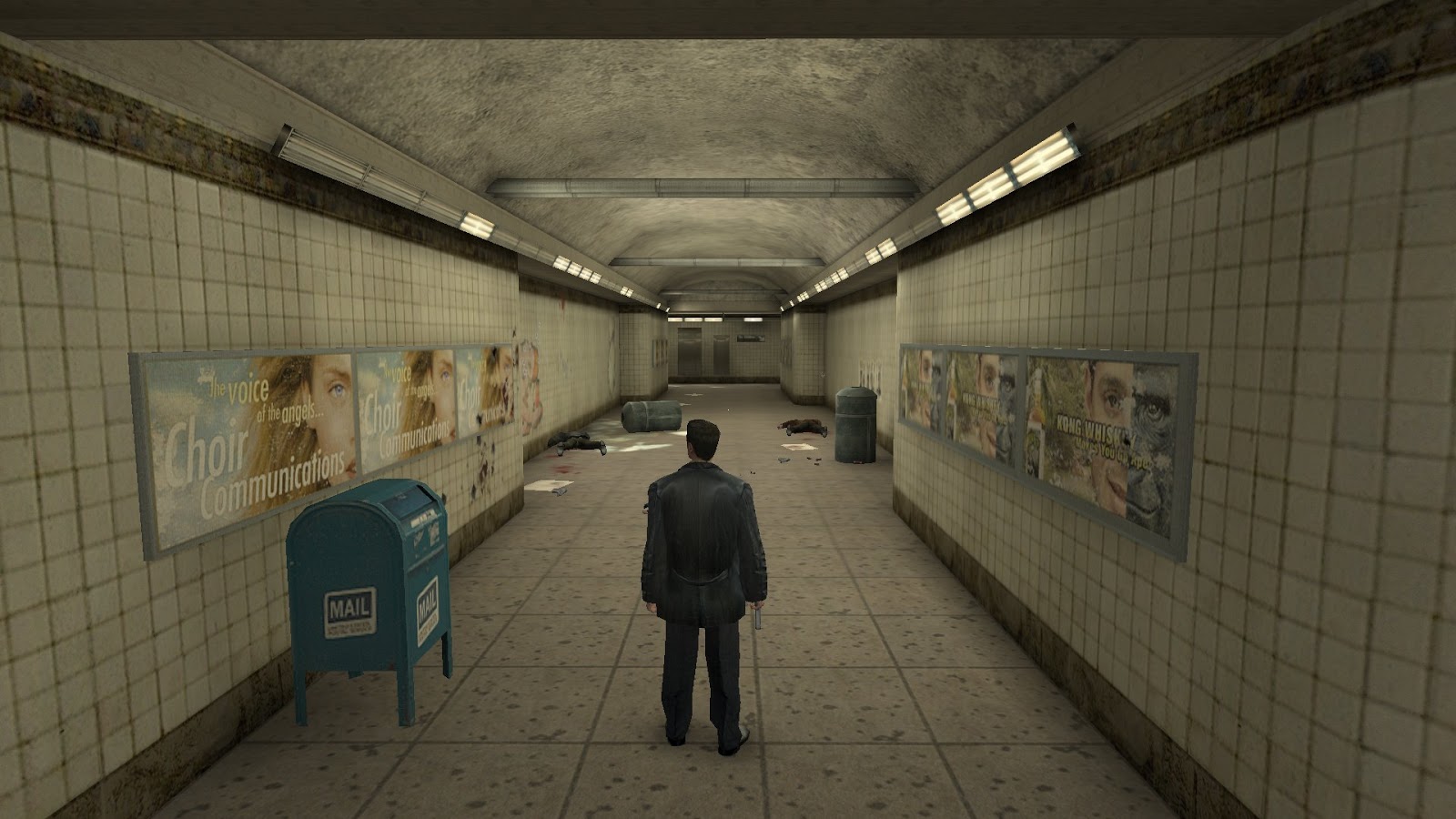 Another innovation, for its time, is that Max automatically recovers a small percentage of lost health; to heal more he consumes painkillers, usually found in small boxes. Lastly, there are several moments which add nice variety to the action, for example when Max operates a train to smash through a heavy wooden blockade or runs for his life in a burning restaurant. The final confrontation is even more suspenseful, as you have limited time to stop the villain from escaping. I was afraid I would not succeed but, in the end, justice was served!

My friend John says that Max Payne 2 is a masterpiece and I agree with him. Nevertheless, after playing Max Payne, I realized it established the main elements that made the sequel so magical: the film noir atmosphere, the narration style, the characters, including mysterious Mona Sax, the realistic level design and, of course, the exciting gunfights. There is no need to decide which masterpiece is better though: Max Payne is untouched by time and proves that games have become an art form. ---- P.S. No, I won’t comment on the 2008 movie. How someone can mess up a film based on such a great game and starring Mila Kunis and Olga Kurylenko is beyond my comprehension.