You are reading
Whispers of a Machine – PC Review

Whispers of a Machine is an indie point and click mystery game that has made its mark on me. At first, it presents itself as a normal adventure game where players are trying to find a murderer, but it quickly develops into a game that makes players think about their perspectives on life.

We play Vera, a cybernetically enhanced human who’s profession is special investigator of violent crimes. Throughout the game, every answer or action taken shapes Vera’s personality. This is a key element in the game because depending on what path players end up on, they will receive special abilities. And as far as I’ve discerned, regardless of what abilities a player ends up with, the case can be solved.

I found after playing the whole game that it stands at the top of my list for favorites released this year.

As I mentioned above, we follow the character Agent Vera, who is hired to solve the murder of a man named Karl – at least that’s how it begins. This is a point I’ll touch on later. 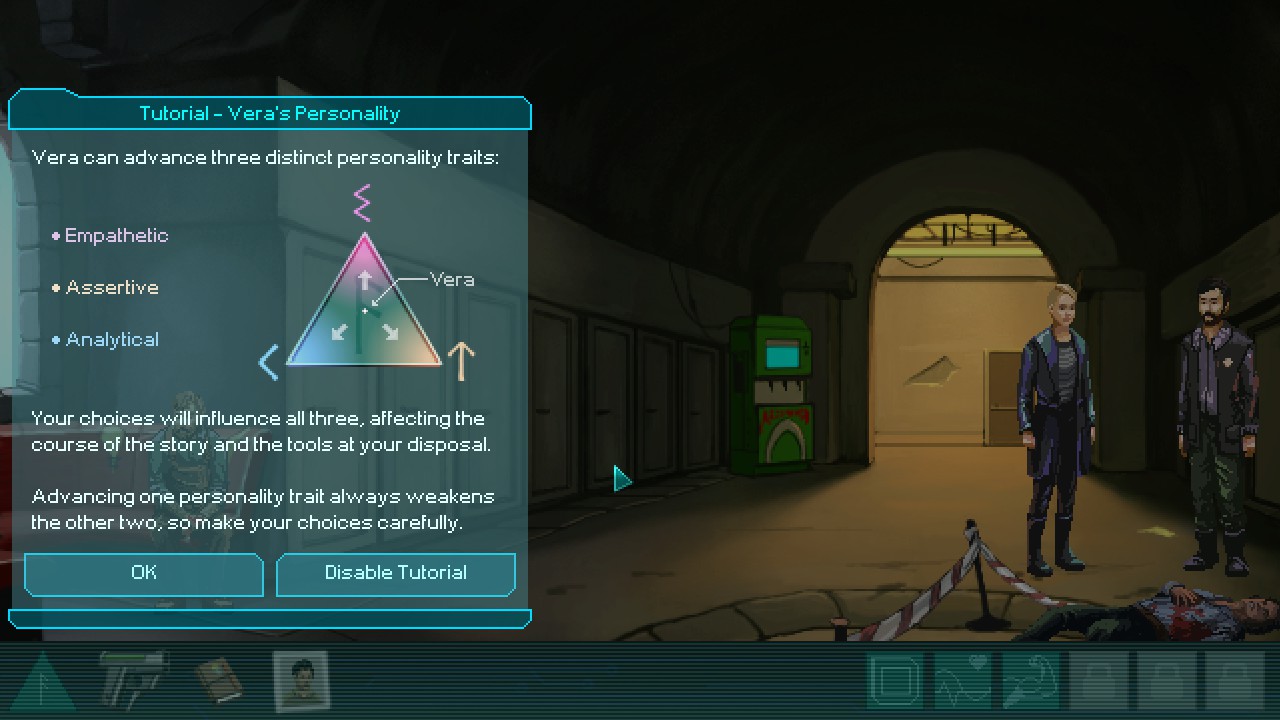 The tutorial, which takes players through the different abilities Vera has, is simple and short. At the beginning of the game, Vera is able to use a scanner for analyzing evidence, a pulse monitor to detect a lie, and an augmentation for strength in case players need to strong arm something. As a point and click game, I expected a bit of pixel hunting and was pleasantly surprised when the developers included a way to see clickable objects.

Right off the cuff we find that Vera’s personality is decided by character interactions and it dictates what Vera’s path will be. Each path corresponds with and grants access to different augmentations. Once a path is locked in, the player has a new augment for the duration of the day. Although, having only gone through one playthrough, I don’t know if the augments change if players move into another path between days. Anyways, these are the paths you can take and what they represent:

Note that all three paths are named after a corresponding Norse deity, which is a nice touch. Though, we never discover why it is important to the story, I do appreciate its inclusion because this shows how much the developers care about the small details in a game. Now, the reason I say it isn’t really understood is because throughout the course of the story, players have to decide if belief (or religion) or technological advancement is more important to the player. However, I surmise that with the Norse runes displayed throughout the game, that the townfolk lean towards belief over technology – especially since it is the catalyst that almost destroyed humanity in Whispers.

In my playthrough, I ended up on the path I expected, which is the Path of Frigg. This amuses me because the augments I received for the next day were dark vision and invisibility. I happen to like being stealthy…

Another feature of the game is that it remembers players decisions, which is what gives Vera the augmentations, but it’s important to know this because the game saves often. This also means that there’s no going back to a previous save in Whispers. It is a feature that doesn’t bother me because once I finished the game, I was satisfied with its ending. And at no time did I feel the need to change any of my decisions, unlike other games which offer players a choice. 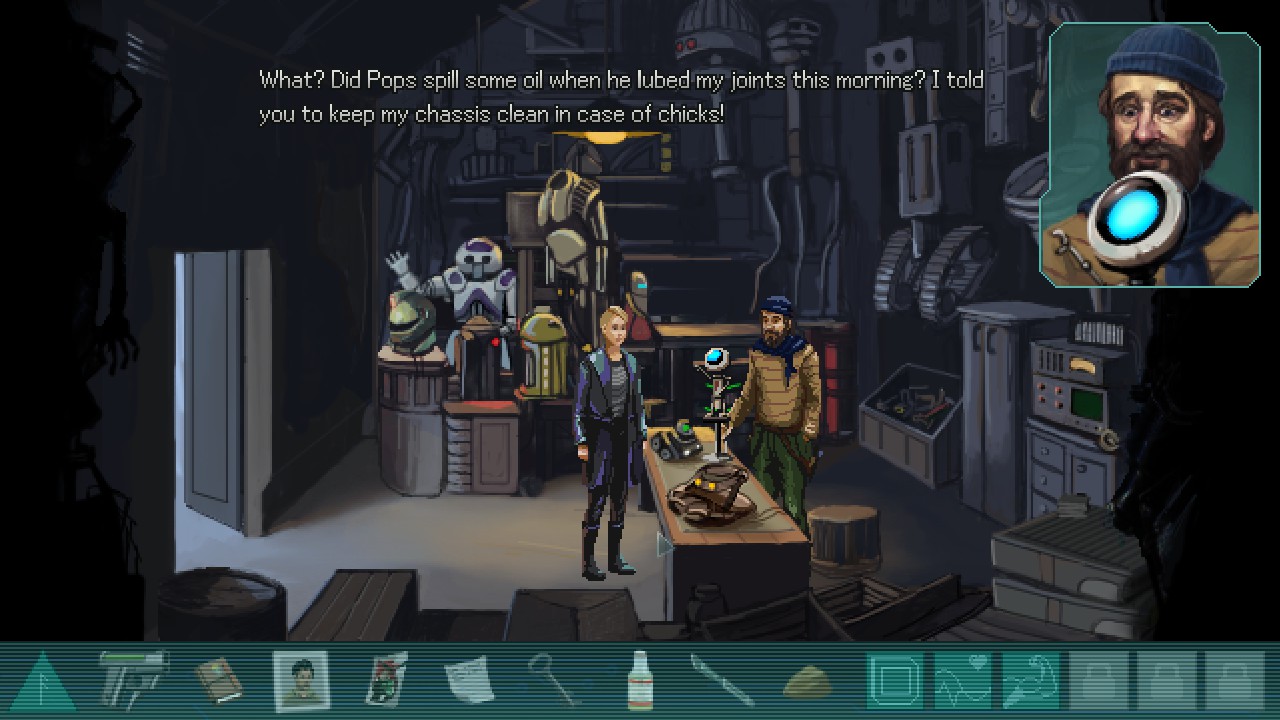 As a murder mystery game, good characters will often make or break the story, more than the clues and the red herrings. And any good storyteller working in the genre of mystery, know how to redirect a players focus off of the truth. With that said, part of the reason I really enjoyed Whispers is because Raw Fury crafted a story that was not predictable to me. And more than that, what really sets this game apart is how the characters shape that unpredictability by the fact that they are masters of deception. Although, that breaks down into incredible writing and phenomenal voice acting. So, while I had interacted with each of the characters, the plot shocked me enough that rationalizing who might be the killer became secondary in my mind, even though solving the crimes was more important.

Now for the hard part… I liked the characters but it’s very difficult for me to explain anything about them because it could lead into spoilers, which is not my objective in any game review. What I can say is that each of the characters serve a purpose in Whispers, meaning that no character exists without them providing a hint or a personality path for Vera. Each of them are human (even if they have augments) and they have their own flaws, which adds to the realism of the game.

Beyond that, I’m not going to explain anything more about the characters because I feel like some of their names would spoil key elements of the mystery. This might seem like a cop out, but Whispers releases information slowly for a reason.

Having said that, Whispers has a fantastic cast of voice actors and I was able to find the Twitter profiles for most of them. Here are the people behind the voices used in the game: Violet Young, Finley Smith, Dave Gilbert, Shelly Shenoy, Andy Chmelko, Andy Manjuck, Al Pagano, Andy Mack, Sandra Espinoza, Mike Pollock, Arielle Siegel, Tom Schalk, and Ivy Dupler.

Now for the fun part!

Upon launching the game, players are presented with two options. One is to start the game while the other is to open up the configuration tool. This is where players will choose the graphics driver and filter, choose the sound device, and enable full screen or windowed mode. The resolution size is automatically detected for convenience. However, these are the only options given.

Once in the game, the option menu allows players to change the language and adjust the game volumes. There is a slider for tutorials, allowing for no tutorials, critical ones, or all of them. Thankfully, the tutorial section is quite short and doesn’t pop up much after going through the beginning. The UI in this game is straight forward as well. Inventory is displayed at the bottom of the screen where it can be clearly seen, and is not intrusive to the player. This is where the scanner, pulse monitor, and augments are displayed. When players activate the scanner and every time evidence is collected, it will show up at the top of the screen. If players come across a relevant point of interest, a sound will be heard and the color in the area will change to green. Finally, players can view the path they are on by clicking the left most triangle, which is also located at the bottom of the screen.

As for the graphics, Whispers is a pixelated game that I thought would hinder gameplay. Fortunately, I was completely wrong in that aspect and found that the game was designed well enough that evidence was clearly visible to the player.

From this point forward I will talk a little bit about what really intrigued me about the game to give it a 10 out of 10 score, because there are reasons that I love Whispers. However, in the interest of saving people from obscene spoilers to the game, I wanted to mention the score before going into detail.

Please be sure to follow Raw Fury, Clifftop Games, Faravid Interactive. Don’t forget to purchase a copy of Whispers on Humble Bundle, Steam, GOG, iOS, and Android. Also, be sure to join Raw Fury’s Discord to keep up to date on all the latest news!

Now that that is said, SOME MORE SPOILERS FROM HERE ON DOWN.

What made me really enjoy this game above others that I’ve played this year (with the exception of Heaven’s Vault), is that players get to develop Vera’s personality based on how she reacts to situations. It doesn’t rely on the linear nature of the story, which can be very tired for players that enjoy games in this genre. And since the cast of characters isn’t large, following the Path of Frigg made sense for me because, even though I figured out who the killer was, I had little understand of their motives. The reason this is important to me is because often I’m exposed to static characters in video games. You choose the decisions and reactions in many games but often are not given options to shape a characters personality – at least not really. With Whispers, your character is given different choices based on the path they followed. 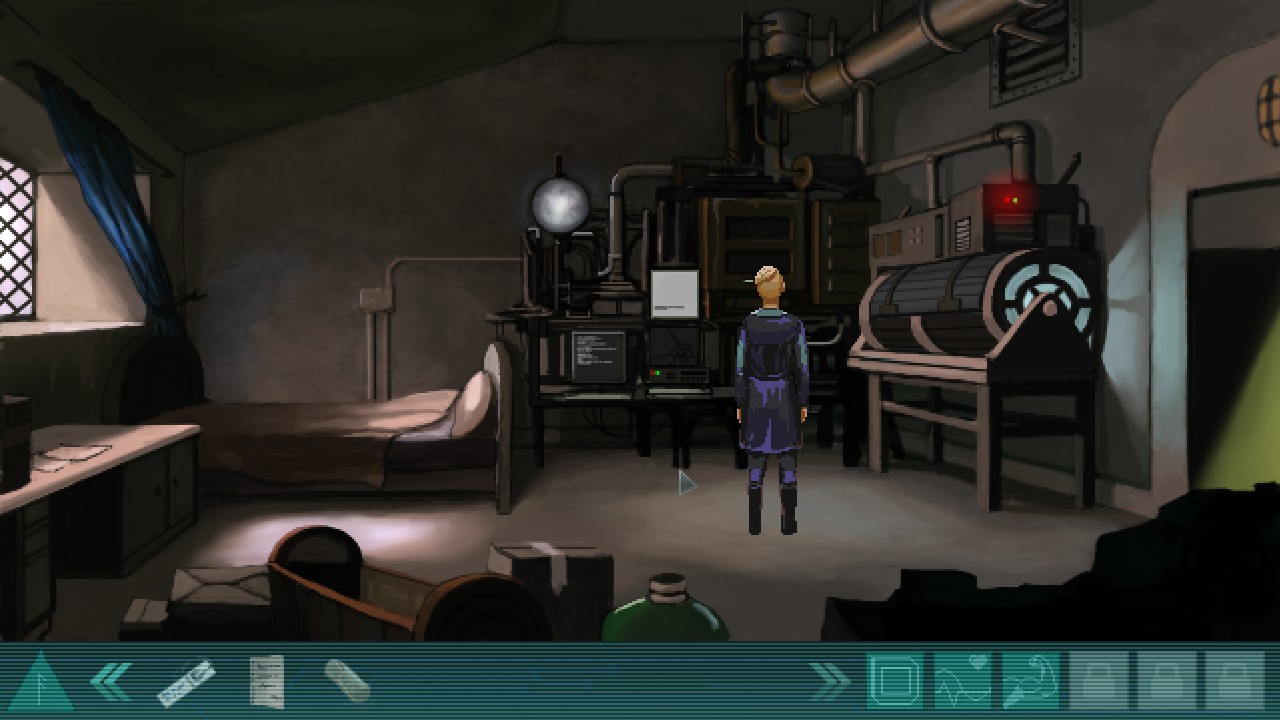 The biggest reason I personally love Whispers is because of its themes. Not only does the game shock players fairly quickly, it then drops a proverbial bomb on them. Players are exposed to themes of creation, technology, religion, terrorism, and relationships. And the way all of these topics are woven into the story is actually quite brilliant. In fact, it is done well enough that I was horrified at the very idea of this game becoming a reality in the future. The fight between humanity and AI is wearing thin, in my opinion, and I was disturbed thinking about all of these themes. It’s the idea that technology plays such a huge role in our society that it will eventually take over and we’d lose our humanity. The fact that in Whispers AI was made illegal due to them causing the fall of humanity, show a bleak outcome. As a result, I could only think back to how story concepts in movies like Blade Runner, Ex Machina (although the movie is awful, but that’s a whole other discussion), and The Matrix might end up becoming our future. If that doesn’t make much sense to you, the screenshot in this part of the review is the reason I was greatly disturbed on a whole other level. It is what challenged my perspectives on life and forced me to think about the path society appears to be taking. At that point, the nitty gritty detective work was the easy part of the game.

With all of that said, I look forward to more hard hitting titles like Whispers of a Machine, so be sure to click the social media links listed above!