Welcome to Mihate town, a place where the dead are said to gather, and where people come to either throw their past selves away, or to meet the spirits of those deceased. The protagonist (that’s you) arrives in Mihate town and hears the local legend of the Yomibito, a tale where every hundred years a deceased person will roam the streets of the town, unaware that they are dead, but will progressively lose their grip on their sanity. At the end of summer, it is said the Yomibito will start a murder spree, unless confronted. But that’s just a local legend…right?

Our protagonist transfers to the local highschool, where he meets fellow classmates Miu, Maimi, Kensuke, and Saya, a teacher who also doubles as the author for a recently popular novel, as well as out-of-town reporter Yukino and…person, Hanako. Will our protagonist find something to do with his life? Perhaps love? A hobby? Maybe a sealed evil deity to combat? Who knows, but this summer will certainly be unforgettable by those living in the town.

World End Syndrome is an interesting supernatural/suspense style visual novel set in a small Japanese town. While that description could be attributed to a great many different visual novels, I found the World End Syndrome set itself apart, sometimes by betraying my expectations, sometimes by being self aware, but mostly because it’s set up in a way that I was really pleased to see. As a Visual Novel, there isn’t a whole lot of “gameplay” per se, mostly just reading. World End can be roughly divided in two parts: a prologue of sorts, where you meet the main cast, and the “chapter” portion, where you actually “do” things. The prologue is mostly text, but when you start in the chapter portion, you get to choose where in the town you want to go over your summer break. Most days are divided into three: Morning, afternoon, and night. Different events will take place in different areas at different times, and you need to decide where you want to go and what you want to do before your summer ends. 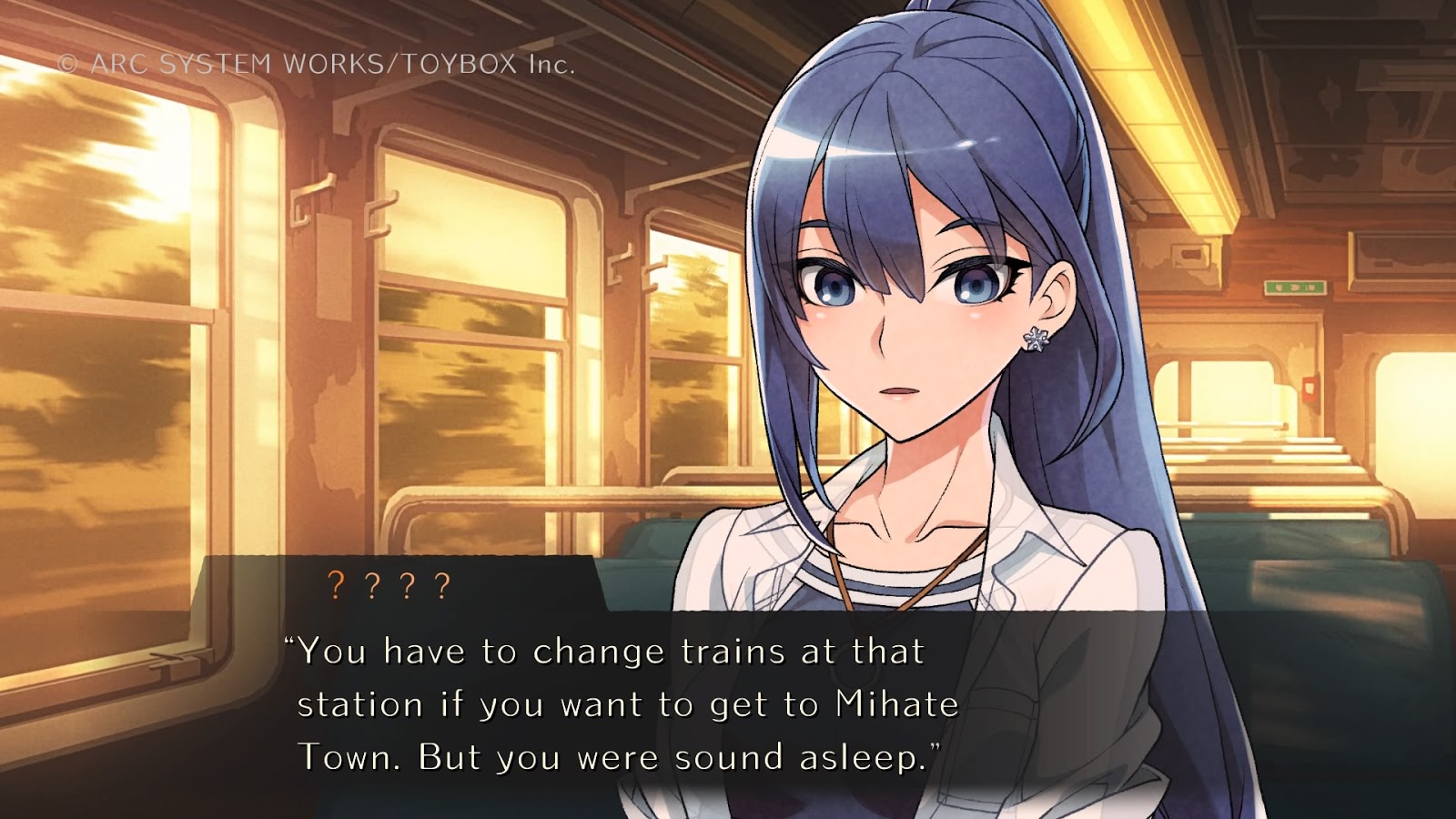 Here is where we start getting into the stuff I really like to see in World End, at least from a gameplay perspective. Having the player choose from a number of different possible locations, instead of just text choices, really brings a more “interactive” feel to the game. In fact, I feel more apt to call it a game rather than just a visual novel because of the sheer amount of options they give you. Included in that are the occasional “missions”, where a character will give you a task to complete. Sometimes this is rewarded with an item or “aura”, and sometimes you just get a bonus scene.

World End Syndrome also has a “global” system to it. What I mean by that is collectibles and such are retained through multiple “playthroughs”, and requirements for certain events depend on whether or not you’ve experienced other events that you would need to see either later, or on a different route. To help you out with this, if you’ve visited a location previously, the game will mark the location with a blue icon, signifying you’ve already visited that area to view the scenes. Additionally, there are also little character portraits to indicate who will be there for you to interact with. Extremely helpful if you can’t figure out a route, you can, for the most part, hit the events or character portraits pertaining to the character you’re interested in.

In fact, World End Syndrome does a lot of things I really liked to see. The biggest is the fact that characters turn. What do I mean by this, you may ask? Well, in most visual novels, characters tend to be hand drawn “cut-outs”, static portraits that may express a small array of emotions. In World End Syndrome, while this is still mostly true, unlike in other visual novel I’ve seen, character portraits actually have side and back views, and they will blink at you too. In fact, the art for the game is really stellar. Most of the backgrounds aren’t just beautifully hand draw backdrops, they almost all have some sort of dynamic component too. 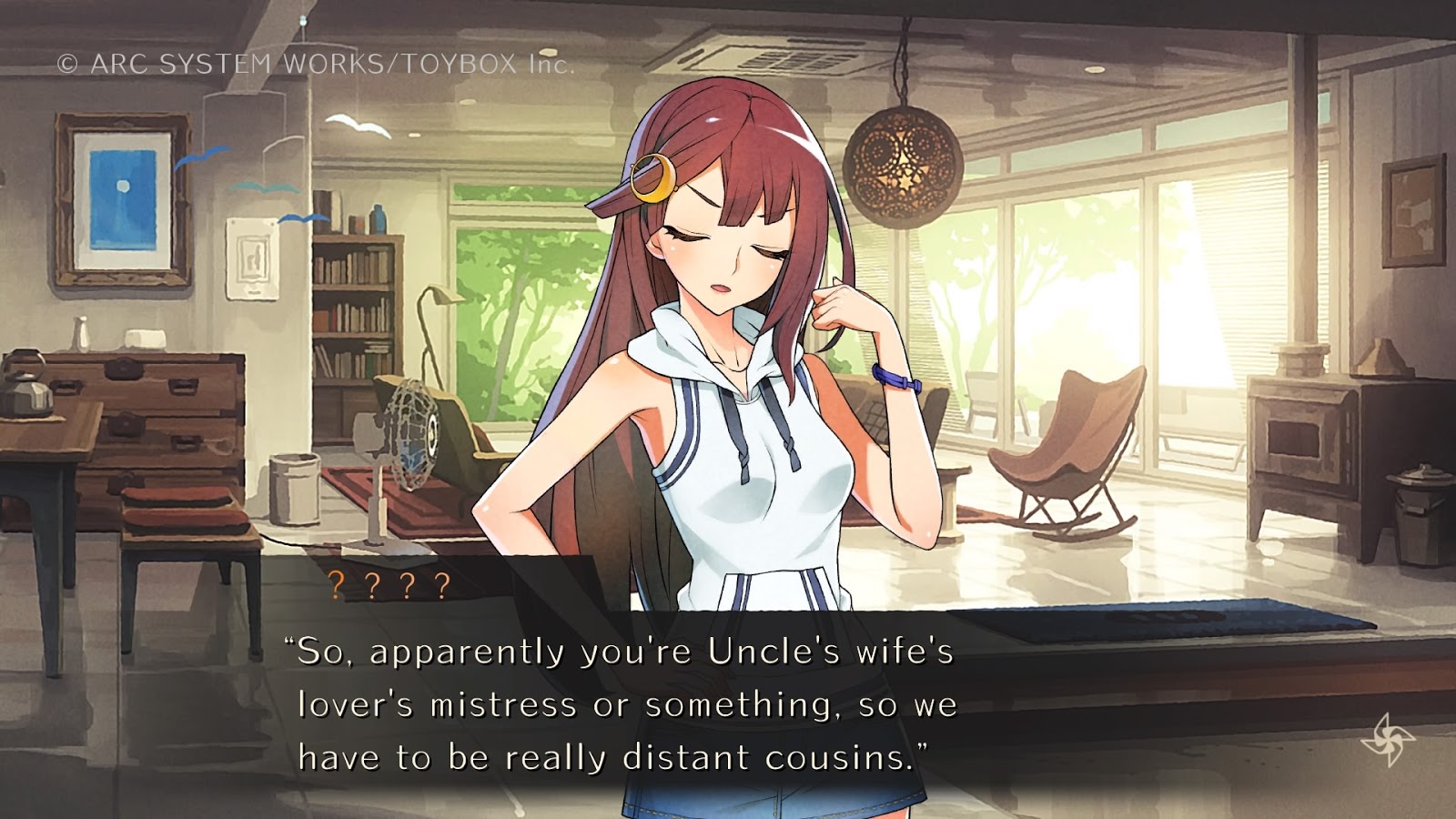 Maybe the grass is rustling, maybe there are pinwheels spinning, maybe a stream is flowing, the point is, very rarely is anything in this game truly static, and I felt as if that really drew me in more than anything else. A lot of care seems to have gone into crafting World End Syndrome, or at the very least a lot of thought. For instance, when you talk to a character and they leave afterwards, you hear them slowly walking away, even outside of the text boxes. Also, if there’s a door around, they will “walk” to the door, and you hear it open and close, which I thought was really neat.

Are there any bad or annoying points? Well, yes. If you aren’t interested in the story, these style games can be a real drag, but that’s primarily personal preference. I rather enjoyed the story behind World End Syndrome, and I feel it lends itself to being accepted by a wider range of people, if not for the plot, for how they’ve drawn all their characters and scenes, or organized their gameplay. The protagonist can’t seem to differentiate between internal monologue and spoken words sometimes, as what I thought were his thoughts turned out to be spoken.

There’s also the whole “aura system” thing. You can pick up a handbook about halfway through the chapter section that explains what it is, but essentially, as you interact with various people, you get “dyed in their color”, helpfully color coded by route (although I expected yellow and blue to be switched). Some events require a certain level of aura to initiate. Aura is gained simply by interacting with the various characters, and is permanent across the “system save data”, so if you needed a set amount to activate an event, you can simply go gather more, and then load a previous save point if you really wanted to. Unfortunately, I felt it took too long to really explain the system, and can be a little confusing when you get white auras, which aren’t really explained at all. Fun fact, if you combine all the colors in the spectrum, you get white. 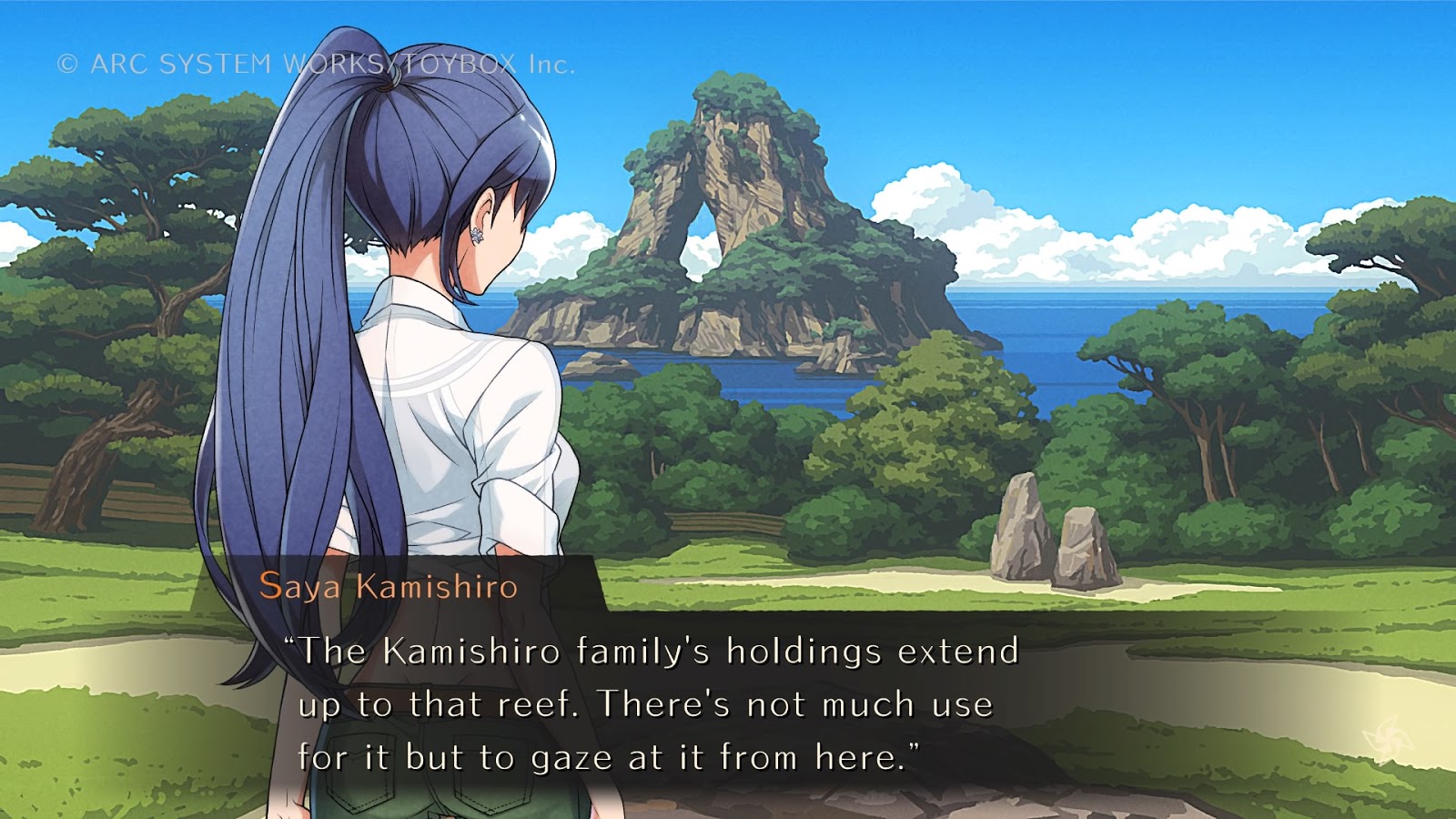 I’ll be perfectly honest here, I wasn’t expecting all that much out of World End Syndrome when I first got it. Heck, I was told it was going to be a different game altogether. So imagine my surprise when I sit down to play it, and then notice it’s three in the morning and I don’t want to put it down. World End Syndrome is super user friendly, intriguing, has a really fitting soundtrack, and totally drew me in almost from the get-go. If you enjoy interactive novels, World End Syndrome is definitely an experience you probably don’t want to miss. So come and unravel the mystery behind the Yomibito, and join us in our World End Syndrome.