Rock of Ages 2 is arguably the weirdest, if not only, combination of tower defense and monkey ball that has ever deigned to exist. Is it entertaining? Yes. Is it full of Monty Python style animations? Yes. Does it have a Pokemon joke? Yes. I think that paints a pretty basic picture of how this game is going to play out.

Rock of Ages 2 has you playing as Atlus, from Greek mythology. He was tired of holding the Earth up, so he set it down for a bit when God wasn’t watching, but then he dropped it. When trying to pick it up again, he got a strangely animated boulder. So he ran away from God to…go find the Earth? The rest of the game is rather…nonsensical, to say the least. You roll around the boulder on a sort of world map, and there are castles and item tokens on the map. By interacting with a castle, you start a…war? Battle? Game? With some personage of historical significance, all introduced with a skit that I wouldn’t be surprised if you told me was written and animated by John Cleese, or whoever was in charge of the Monty Python animations.

Battles consist of, and I quote this “rolling large rocks down hills at each other”. Yes, I’m fully serious here. Essentially what happens is a two phase sort of system. First you get to lay down some traps (the tower defense mode) to try and prevent your opponent from getting his rock to your castle. You have an amount of cash that you can increase by destroying enemy traps, and objects on the field. While you are doing this, a bunch of workers are carving out your boulder. When they finish, you can roll the boulder down the hill, dodging or destroying traps, and trying to ram the enemy castle gates as hard as you can. 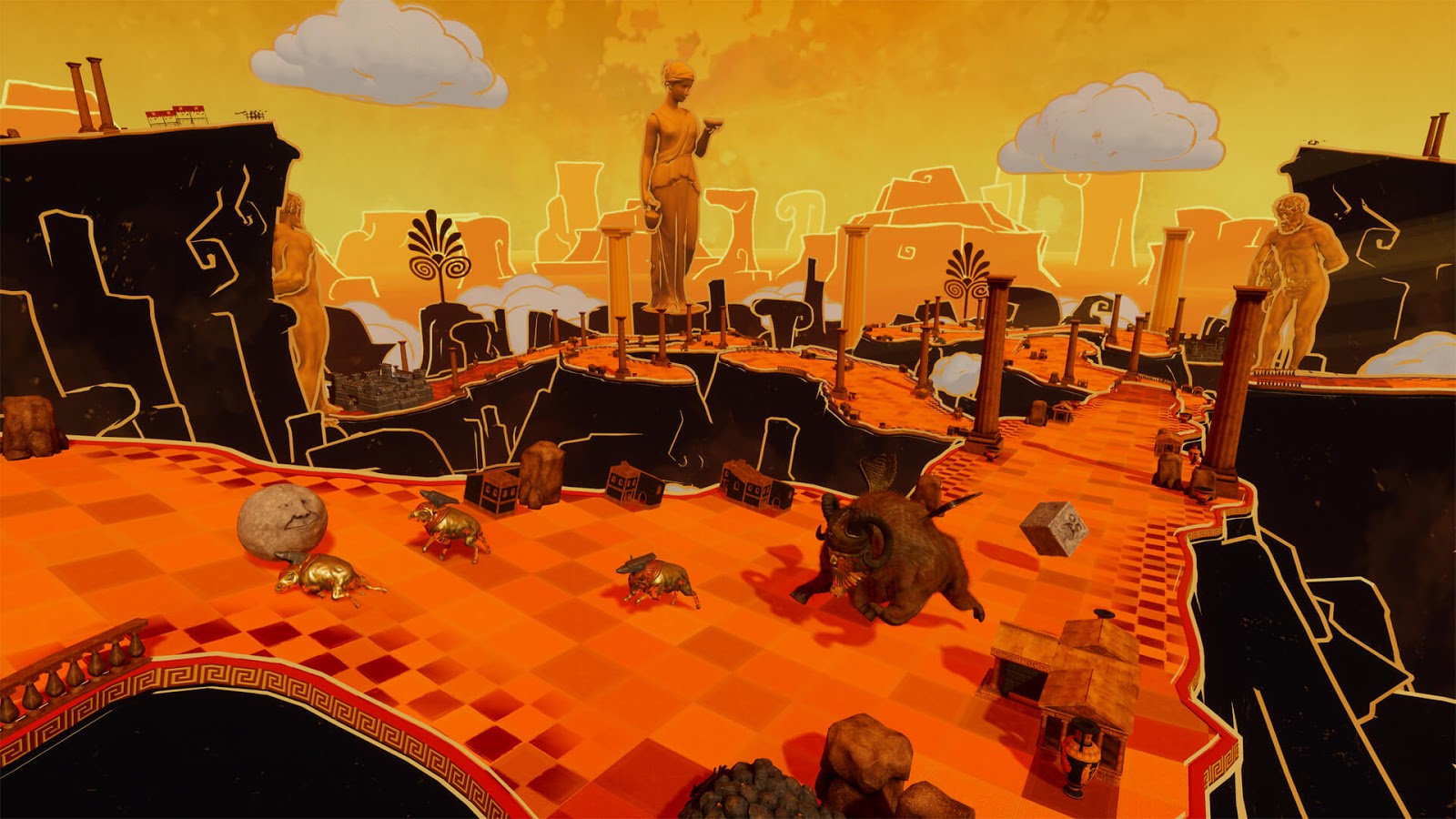 Your boulder does have a “health bar” of sorts though, and getting damaged too much will destroy your boulder, or your opponents’. Ram into the enemy castle gate with as much speed and health as you can, and try to crush your opponent! Traps are…varied, to say the least. There are the standard walls and spring floors, but there are also traps such as “sticky cows” and “lions on balloons”, which are weird, but really useful.

You also have an obstacle course challenge, where you race your opponent to the end of a stage, as it gets progressively harder each time. First to three points wins. Both of these modes are available in an online and local multiplayer as well, so you and a friend can roll on out! Stages are all varied and themed with different world locations, and all the paths to roll down a rather unique in their own ways. While the opponents in the solo campaign mode can get a little, or ok, VERY annoying at some points, it’s still really fun, and the sense of euphoria when you set up a blockade or really annoying trap just before a large jump, and the enemy boulder goes careening off the edge? MMM, feels so good.

There’s a lot of variety to rock of ages 2, despite being rather short and straight forward. There’s a myriad of game modes, and even boss battles in the campaign mode. The opening skits are hilarious, and it’s fun to play with a friend. You get some nice classical music as background, although the looping could have been handled better, and the traps are all interesting and fun to play with. 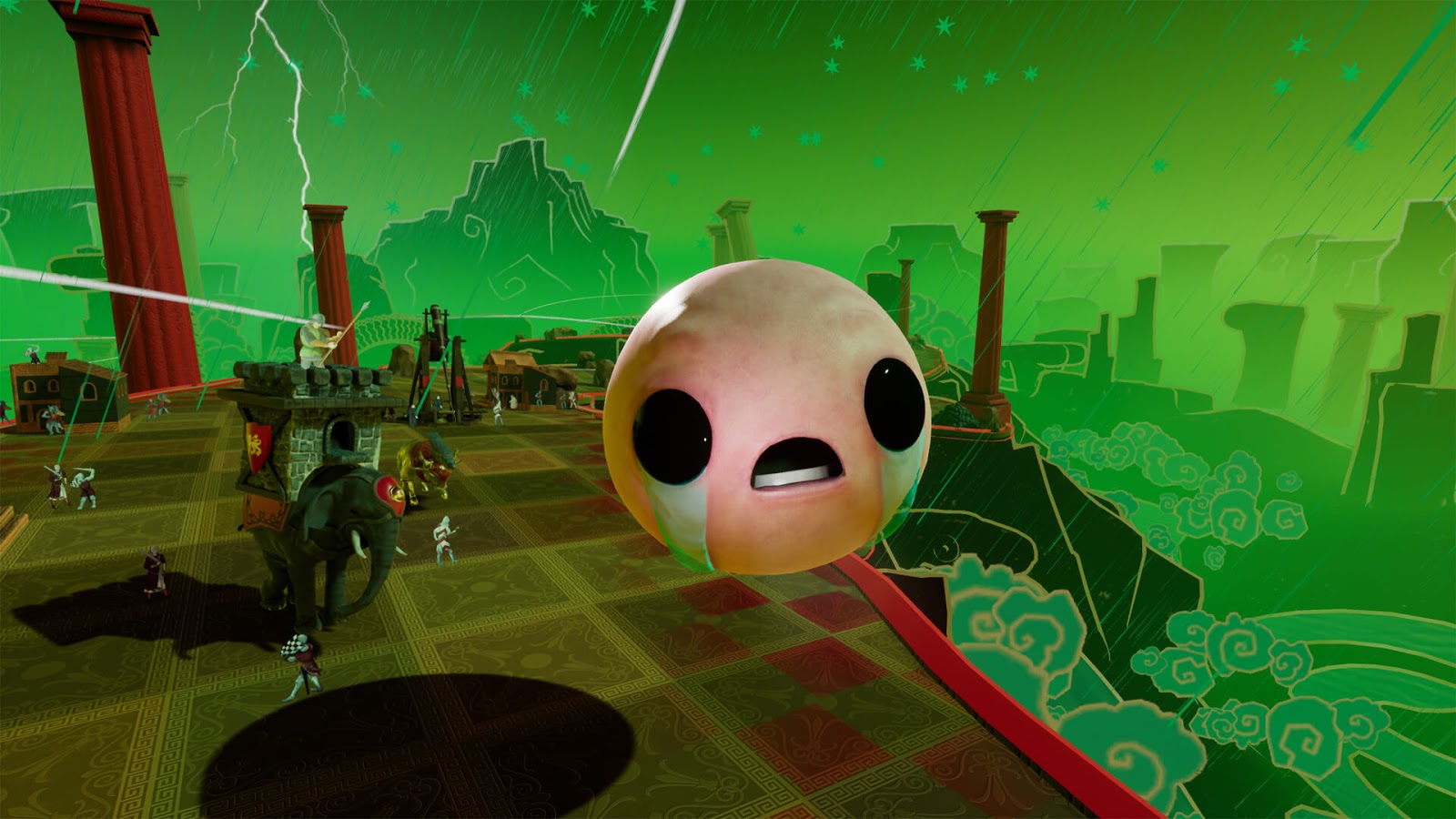 There is an online mode available if you don’t have any friends on hand, so there’s no too much worry if you get fed up with playing against the AI, I’m sure there’s someone out there just as bad as you! While I didn’t notice any particularly glaring flaws, there were times when the switch was REALLY struggling to render some of the drawings, essentially giving you a nice blur of color to stare at until you figured out what it was.

Rock of Ages has released for a bunch of platforms now, and the port to the switch has gone pretty well. If you haven’t picked it up on another platform, and are looking for a good game to play in your spare time or with a friend, give Rock of Ages 2 a roll, I’m sure it will be smashing!