Va11ha11a is an interesting little game, touted as a “booze ‘em up”, adventure into a dystopic futuristic society where crime and villainy abound. So it’s up to you to make things right! Quite literally, as you work as a bartender in the eponymous Va11ha11a bar.

In case you were curious, no, you don’t go out fighting crime or cleaning the streets. You are a simple bartender, named Jill, who’s main goal is to make enough to cover her rent. You make drinks and interact with customers. Maybe even visit the store to purchase some fancy retro arcade machines if you have enough cash. Va11ha11a, despite having all the set-up for what could be pretty much any sort of action game, is actually closer to a visual novel in nature. The only thing you do is make drinks for customers. Sometimes this is what they ask for, and sometimes it’s what they need.

Va11ha11a has the primary focus on interacting with the, sometimes less than reputable, populace while mixing them drinks. If I had to describe Va11ha11a in one word, it would be “cathartic”. Jill is essentially a listener/improve psychologist for the majority of the patrons, which is a position I tend to find myself filling surprisingly often myself. Despite the fact I have the emotional range of a beige brick wall, I tend to get a lot of those late night calls saying “I need to talk to someone”. But I digress. Va11ha11a is a weirdly “real” chat with some fictional people. While the specifics of the patrons problems might not be realistic, I found a lot of the conversation to draw from some very real ranges of concerns and worries anchored in real life. 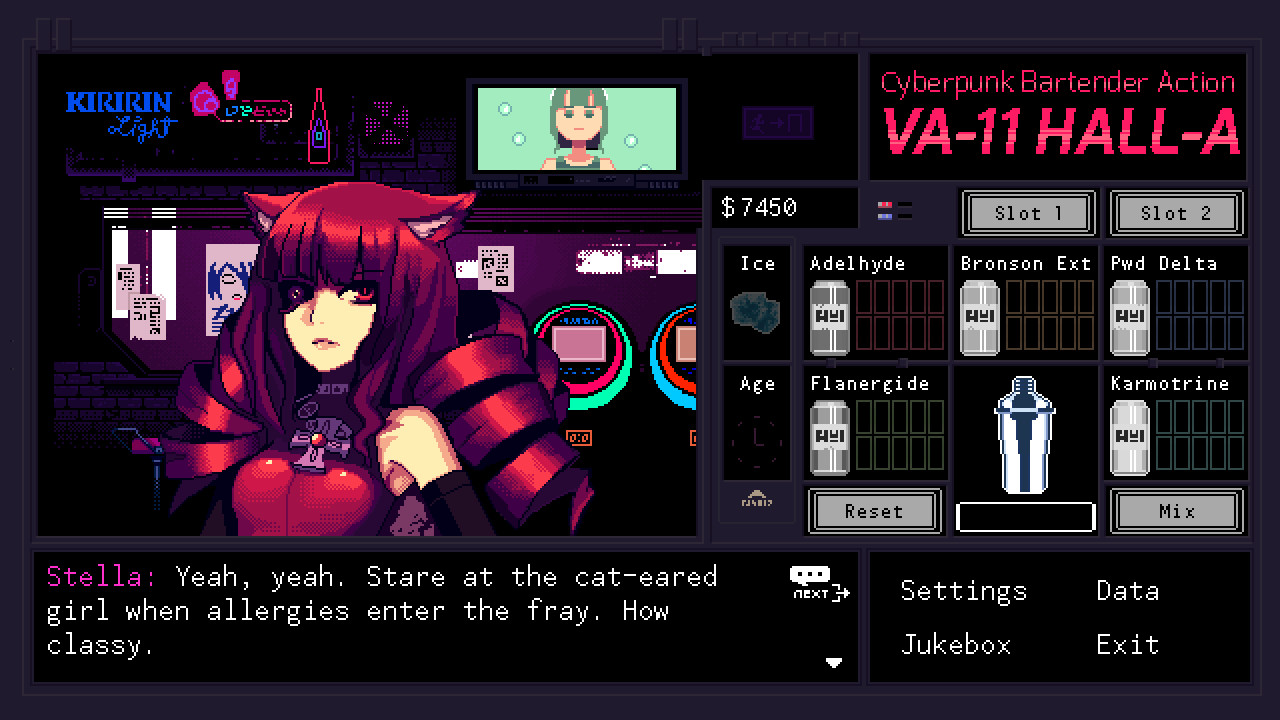 It also helps that Va11ha11a really draws up some interesting people as well. You know all those RPGs where there’s a character that pops up occasionally that you really like seeing? Maybe they’re funny, or weird, or badass, or maybe they just have a really interesting air about them? Well, all of the above are pretty much the cast of Va11ha11a, to one extent or another. The characters felt like those people you always wanted to hear the story of, despite not being main characters. And hear their stories you will.

Despite the fact most of the game is simply listening to, or reading, about the locals’ stories, you do in fact make the drinks yourself, and it’s actually a little bit unintuitive to a certain point, although that’s a bit of the charm of things. You have a list of drink recipes to draw from, and you have as long as it needs to make them, although failing a drink isn’t exactly going to make the customer very happy. You toss some ingredients into a shaker, either add ice or age it if called for, and then shake or blend, and voila, drink for monsieur. 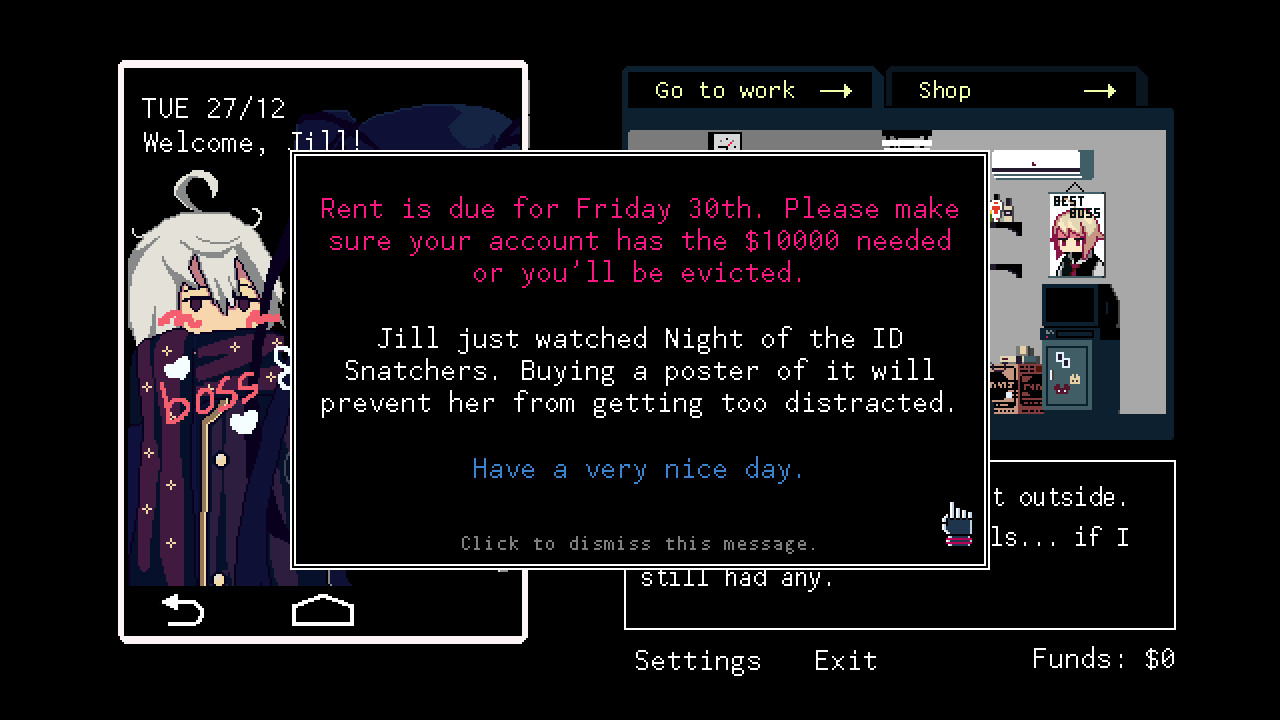 The unintuitive part is the shaking/blending. If you want to shake, you start shaking, but have to stop just before your shake turns into a blend. There’s a bit of trial and error for this, but thankfully you can cover this in the tutorial without taking a hit to the wallet. As you continue with your shifts, the regulars will drop by asking for the usual, so you better learn their preferences. Sometimes they’ll ask for a general description of a drink, like asking for something “sweet”, or “classy”. You get to choose for this, and can add extra alcohol for a bit of an extra kick, if you think it would do the one sitting at your bar some good.

Va11ha11a is a really odd game. Not because it’s bad, or particularly weird per se, but because I have nothing to really draw a parallel to for comparison. Yes, there are visual novels with gimmicks, but those normally culminate in something, whether it be snagging a girl or unraveling a magical conspiracy by fighting with giant mechs using anthropomorphic books (yes that’s an actual example). Va11ha11a, on the other hand, is perfectly content to just be as it is, which is something I can say is rather novel to find. You aren’t going to find much action here, but the company certainly kept me coming back for more.