Dark Quest 2 is one of those throwback titles that you just know that you’ll enjoy. Old schooled dungeon crawling mixed in with some modern day elements, and you’ll be guiding your party through an ever increasing difficult situations as you hunt down the evil wizard that overtook the castle and killed everyone that was in his way.

Starting off with Conan, errr, a nondescript Barbarian looking man, you’ll be guided through the introductory features. Moving around the dungeon and its various rooms is as simple as clicking on a title and moving over to it. It was honestly really nice to not have to move across every single tile every time you wanted to move. This alone sped everything up as often the rooms are big enough, and depending on the segment of the dungeon, you’ll be moving more than one character around.

What works, and works well, is that not every dungeon segment is designed for more than one character. Some have a limit of one person while others have a limit of two or the maximum party of three. This didn’t seem like much at first but as you move forward, you’ll come to realize that you need to find a steady base to operate from or you’ll never make it through the dungeon. 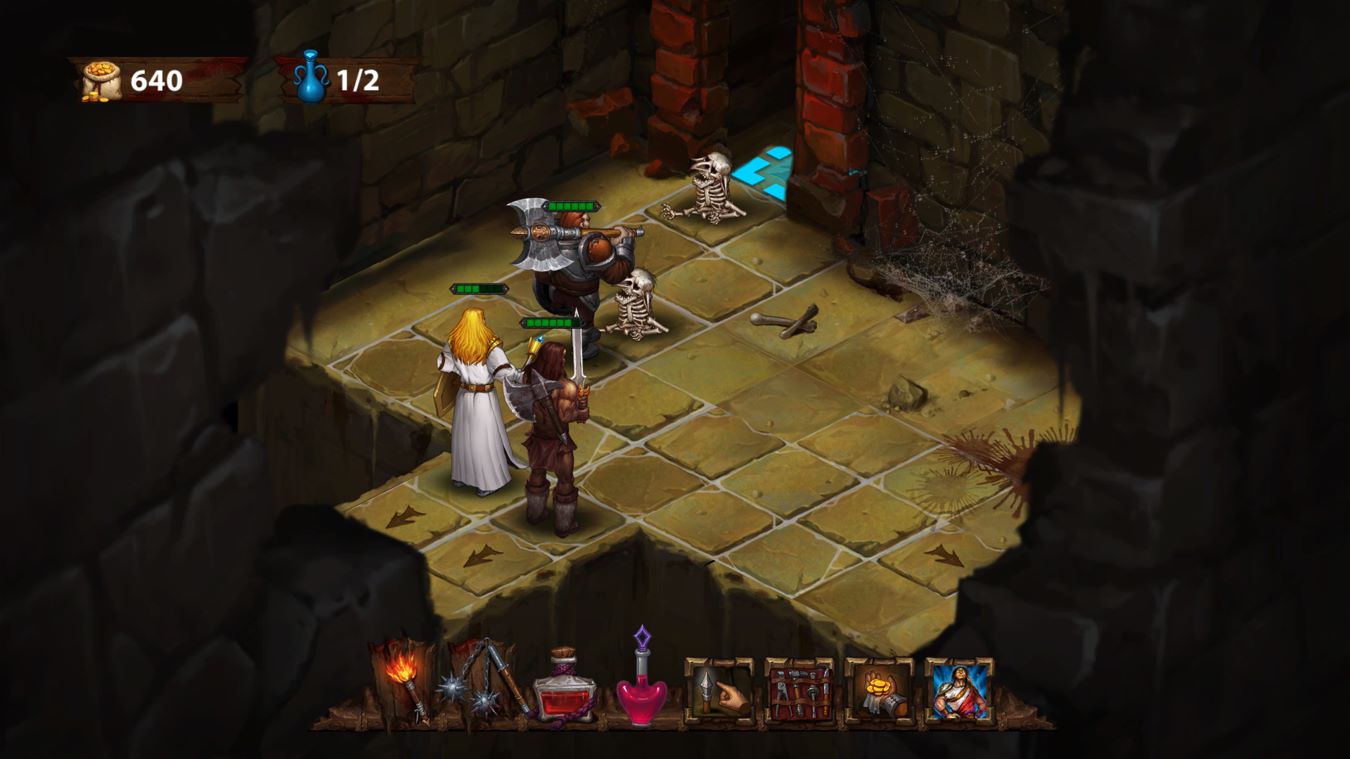 Within each of these rooms you’ll find gold, treasure chests, traps and enemies that must be overcome if you want to move forward. Another neat touch is that overcoming enemies can be as easy as moving around them to flip a switch or walk out a door as there’s no experience trains to ride in this dungeon. If you want to level up? You’ll need to find potions that can be used back in town to do so.

“Leveling up” characters in your party is easy. By using blue potions that are found in town, there’s an NPC that can level up any character’s skills by one for each potion that you have. There are no limits to how fast you can level these up either as there are no actual levels to your party. Everything is divided into the skills that a character learns and the two items that can be equipped which come from crafting them at the blacksmith. So because of that, there’s no real grinding which is why if the enemies are too obnoxious, like the giant dual-wielding tower shield ogres, you can simply skirt by and leave them in the previous room.

While being designed as a classic, there are a few streamlined elements like the movement that increase the pace of the adventure instead of slowing it down. Littered with traps, characters have passive abilities like perception that work within a few tiles of where they stand. Leveling up the abilities can increase the tile range into being able to do a sweep of the whole room as your party walks into it. Disabling the traps is as simple as moving a character with the skill over to them and hoping for the best! 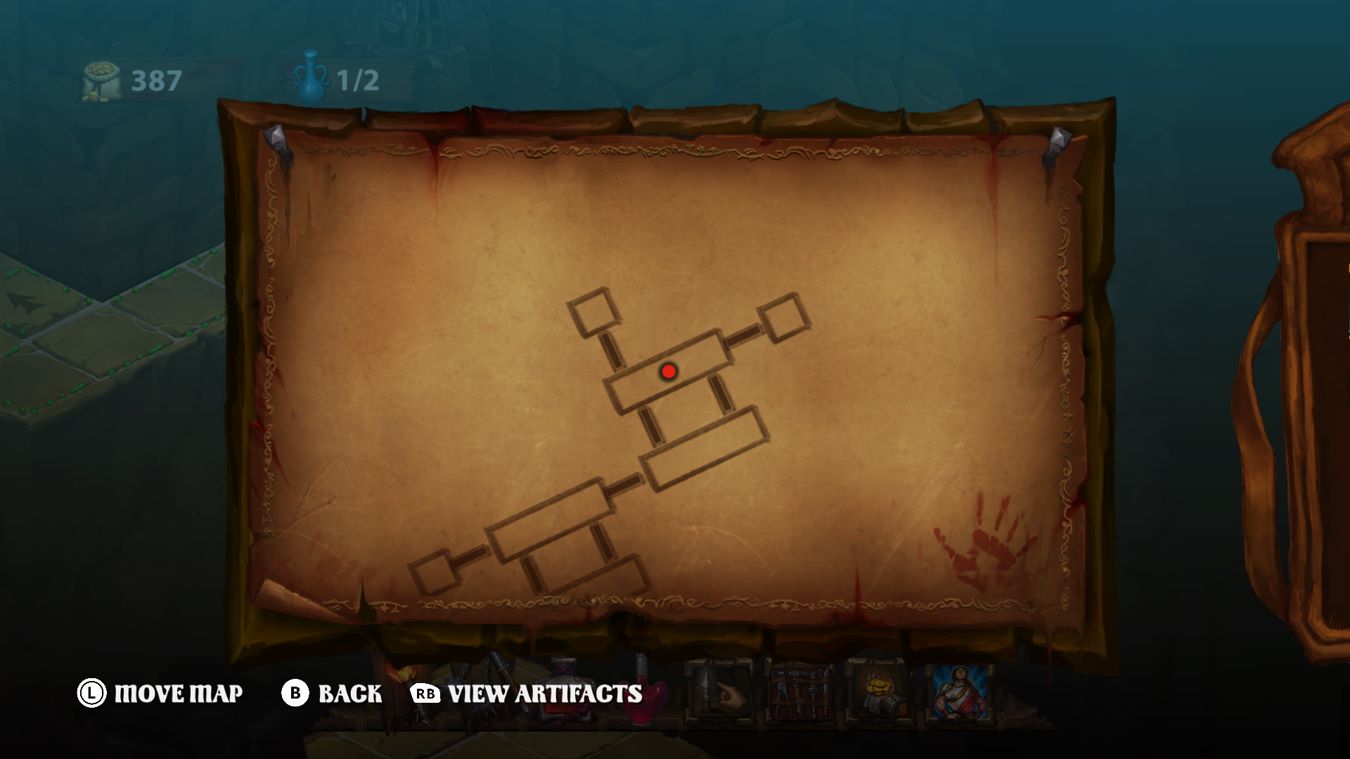 Where things don’t quite work, is within the combat and the ever increasing difficulty level that often does not seem proportionate to what you have on hand. While your party will often block enemy attacks, especially your shield wielders, the enemy seem to block way too often and when there are almost twenty in a room? That’s almost certain death for your party especially when they gain no experience for the fight at hand. Enemies themselves will go from being manageable to where the hell did those hulking masses come out of?

There are ways around the above, but they won’t always be immediately noticeable. With up to three characters that you can put into a party to send out into the dungeon, the three that you choose may not always be up to the task. Defaulting to the Barbarian, Knight and Dwarf, there isn’t much that the three cannot accomplish. The Barbarian hits things, the Knight heals things and the Dwarf other than make a lot more money than everyone else, also finds and disables traps. That said, walking into a room with twenty enemies and while they can come out on top, it’ll cost most of their offensive and defensive abilities and that was just the first room. 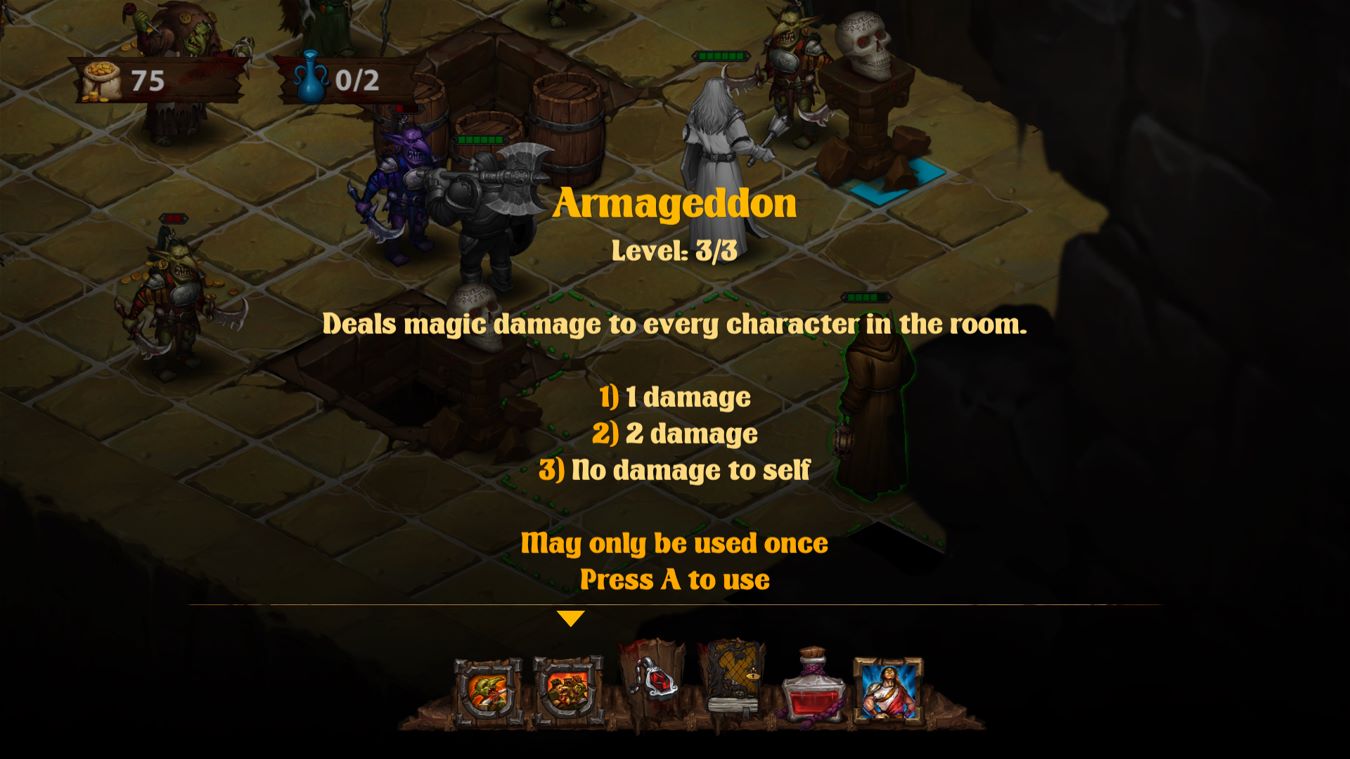 The other three characters available are a Ranger, who can also disable traps while simultaneously set them, a Wizard who makes things go boom and a Dark Monk that specializes in darker magics like being able to one shot any creature. Twice if fully upgraded. Three times if you give them an item to increase their charge count. Add in a few other fancy tricks and this one character can wipe most things from the map, including your own team if you aren’t careful.

Overall though, Dark Quest 2 offers up a good time. With both classic and modern elements, diving into the dungeon to take out an Evil Wizard hasn’t been this fun in a while!