This is a bit of an odd one. The corpse party series, as I’ve written about before, is one that I really love and have spent a great deal of time playing in the past. Recently, they’ve started to re-release remastered versions of all the past games for the PC, which has been awesome to see. However, this is the first of two games that have, until this point, never been released outside of Japan. So while this is technically a re-release, it is all-new to me and there were surprises I did not expect along the way.

One of the things that makes this particular title somewhat odd however, is that its place in the timeline is a bit skewed, raising questions about how canon it is or isn’t is. Supposedly, this is a fully canon game, taking place sometime in between Book of Shadows and Blood Drive. And this is shown in some ways, which I won’t spoil here, but for the most part the majority of events occurring can be ignored.

But all that being said, this isn’t really a key point in the series, and isn’t something to look at unless you’re already into it. It can be skipped in favor of Blood Drive before coming back to it, or looked over entirely. This is not a typical corpse party game in regards to storyline or content.

The gameplay is a pure visual novel. It’s very much alike to Book of Shadows, but in this game there aren’t any exploration or puzzle-solving elements. You go through dialogue, make choices, and try to get all the endings. It’s essentially a more simplified Book of Shadows. There isn’t much more to the gameplay than that, so it’s another thing to keep in mind going into it. That being said, I mostly play the games for the story, and Book of Shadows is probably my favorite of the games so far, so it works out perfectly fine for me.

The story isn’t anything like any one of the other games in the series. It’s a fan-game in a sense, with a lot, if not all of the stories being written by guests with supervision from the creator of the series. It’s a lighthearted story, nothing alike to the horror that you’ll expect from the other games in the series. It’s Sachiko’s birthday, and she’s decided that for this one day only, she’ll spare her victims from the horrors of Heavenly Host. Everyone’s gathered into an auditorium within Heavenly Host, a room not seen prior to this game. Sachiko announces that for the day, she wants to play party games with everyone. Of course, initially everyone reacts with confusion and anger, demanding they be let out and all that funky jazz.

Eventually though, it’s decided that they should just play along, since they don’t really have anything they can do about this situation regardless. The game then turns into a comedy of sorts. Going through different settings laid out by Sachiko, such as a Rom-Com and a Murder Drama, with everyone merely going with the flow of things. It’s very lighthearted and there is very little in the way of doom or gloom as you might expect. 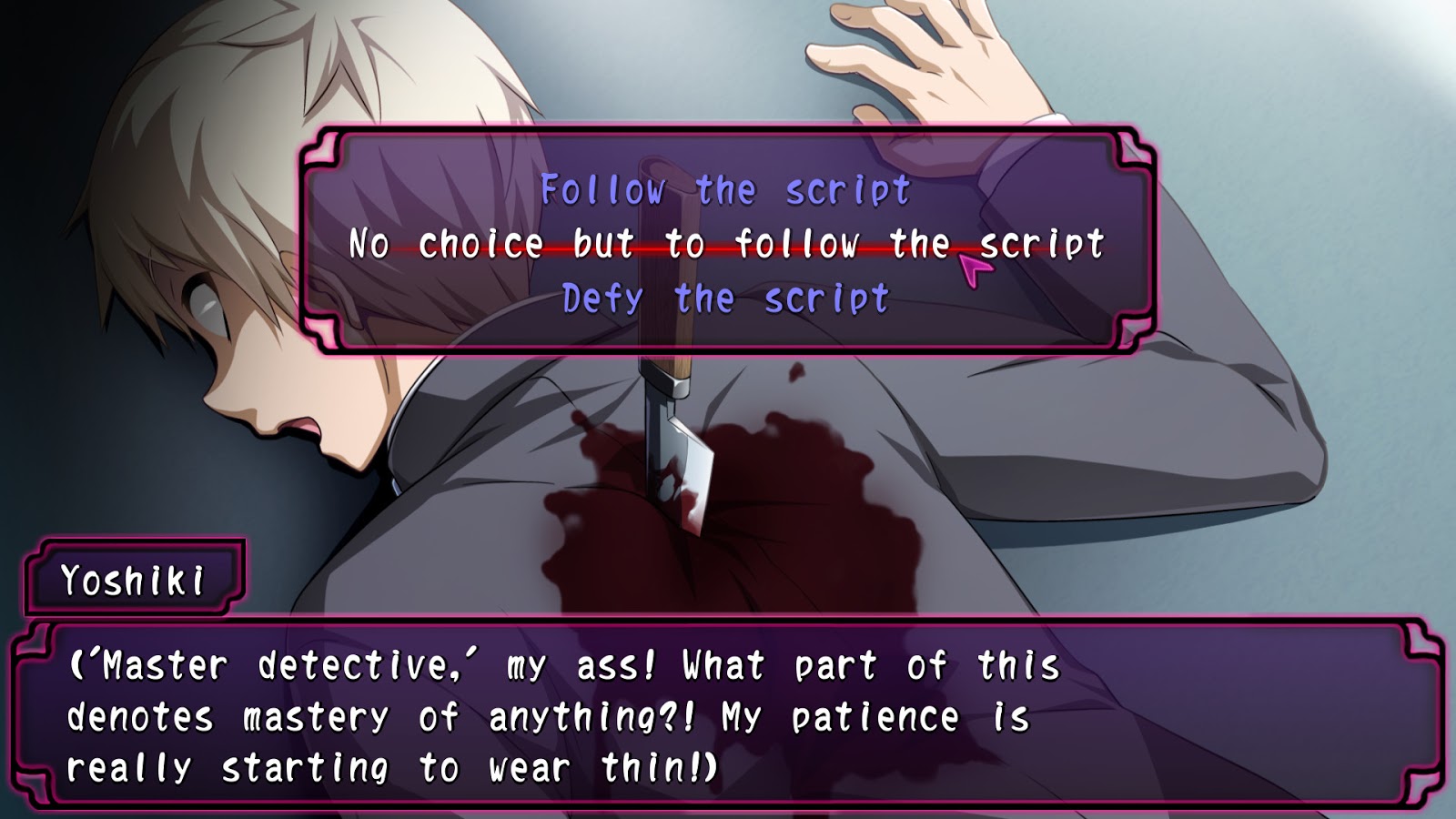 One of the interesting things they’ve done here is introduce characters from future games into this one, dipping into the cast of Blood Drive to fill the roster. This vis a part of where the confusion for the timeline comes in, as this is another alternate universe of sorts. Like the rest of the Corpse Party series, this takes place in some messed up reality, where while this is technically canon, it’s also not at the same time. The characters here are not necessarily the same versions of the characters we see in either the past or future games, and don’t have the same knowledge you might expect from the timeline they came from.

This is done to allow the characters to act as they did earlier into their series, still being rash or scared and the like, not having fully experienced the horrors of Heavenly Host quite yet. There are some interesting bits of dialogue which confuse me personally, as I’m not entirely certain how close in release this game came to Blood Drive, as its original release was on PSP. I believe that there are altered bits of dialogue, as there are some parts which break the 4th wall in discussing the game of Blood Drive, but the initial release of the Vita version was 2 years after this game’s. So unfortunately, I couldn’t do a good job explaining what’s going on there.

The visuals are certainly good enough in this game, though they are just re-using assets from the other games which gives the character art a bit of an odd look. You can very clearly see the shift in design principles looking at the Blood Drive characters vs the Book of Shadows characters. The newer characters are more detailed, and slightly better proportioned (though my personal pick would be the original cast in regards to character design). It makes me wish somewhat for updated character sprites in the original cast, but it’s not so different as to be completely off putting.

Aside from that, everything looks good, and the CG art is at the same quality of Book of Shadows. The PC art is perfectly upscaled, and I haven’t noticed any blurry assets. Everything looks as crisp as it should for a PC port here. Although, that being said, the PC port isn’t perfect. Obviously not much needs to be done to allow these games to work on PC, as long as they still look good. But one thing that’s annoyed me is the lack of customizable controls. Or for that matter, any way to view the controls. There are prompts for some keys, such as going back in the menus being backspace, or to sort saves you use Del. But not only is it harder to find out controls when a computer has so many keys, but the controls that are here don’t make a whole lot of sense. To open the main pause menu, you Right Click on the mouse. Not escape or tab or anything of the sort. From here you can save, load, view the message log, adjust options, or quit the game. The menu itself makes sense, but it’s accessed in an odd way.

If you want to do other things though, it gets funky. Most of the quick buttons are in the Function keys. F2 to view the log, F3 to auto-play dialogue, F5 through F8 for saving, loading, and quick variants of those. Then all the way on the right side of them, F9 to open the options Menu, and F10 Pauses the game by freezing it in place. Then other keys perform various other functions but honestly I’m not certain as to what most of them do. The controls would be fine if there was a place to view them all, or of course if you could change them around, but as it is they’re annoying to try and find out, more so than they need to be. You can, however, configure the gamepad exactly as you want button-for-button. So that’s nice, although the default gamepad controls are good enough in my personal opinion. But other than those issues the PC port is competent enough not to majorly detract from the experience. 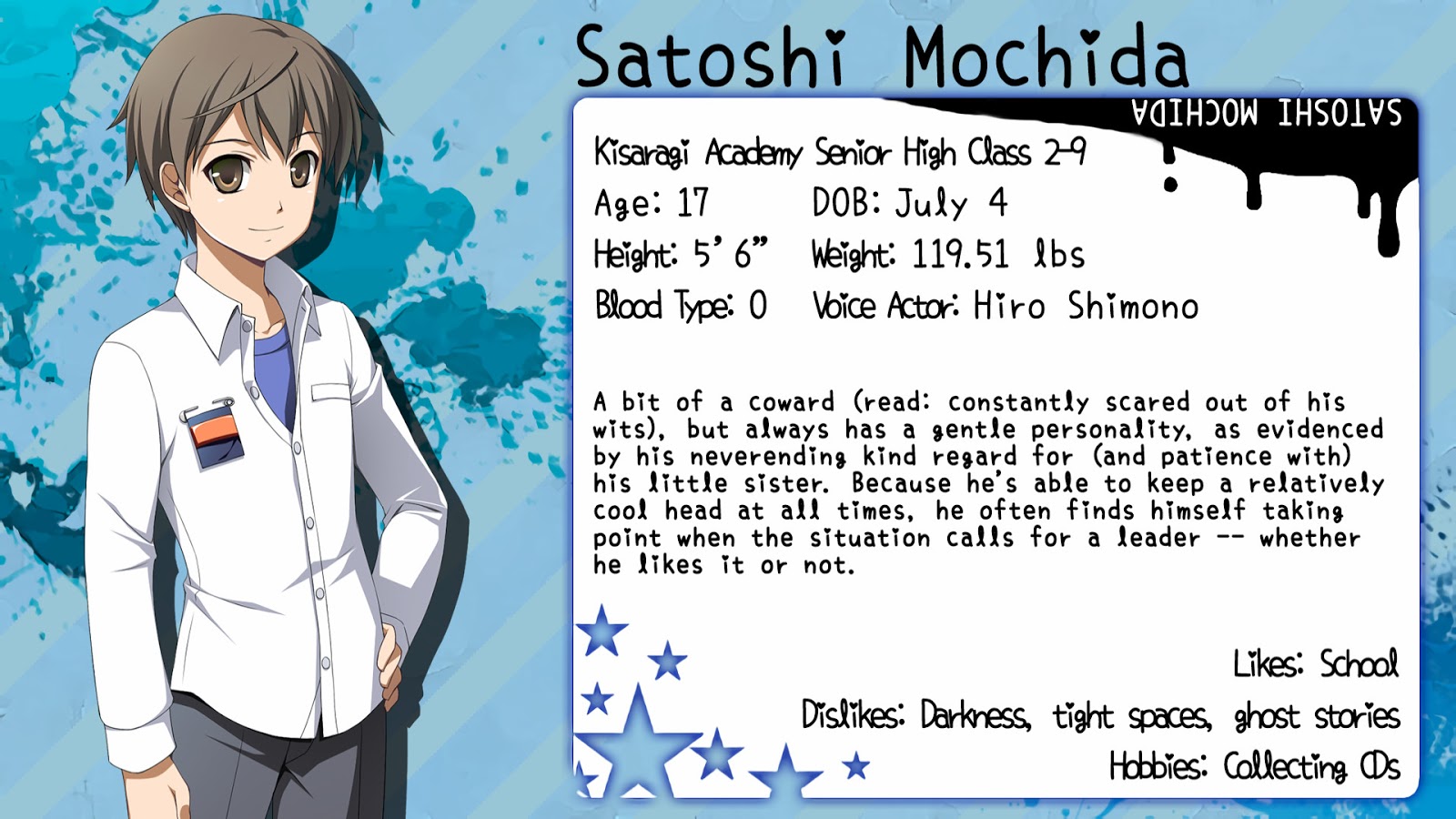 The only other thing to talk about is the sound, which is pretty great as always. There are a couple of re-used tracks from the older games. Although I’m not quite as familiar with Blood Drive to say whether or not any of the tracks are shared from that game. In addition, there are some new tracks, with some being happier sounding remixes of the older games, including the main theme, which has always been my favorite. Not much to say here, the 3D sound is still at work, so use headphones when you’re playing to get the best experience as always.

All in all, this is an interesting title in the Corpse Party series, but it’s not something for everyone. It’s an almost entirely lighthearted story mixed with pure visual novel gameplay. If you enjoy the other games in the Corpse Party series, understand what you like about them before dipping into this game. If you’re looking for horror then this game won’t be for you, but if you enjoy the characters enough to be willing to watch them in a parody, you’ll be able to have a lot of fun with this title.

Facebook Twitter Pinterest E-mail
Previous article Tesla vs Lovecraft DLC is now Available on Android and iOS
Next article Pre-Orders for The Sinking City Have Begun with a New Gameplay Video!