Do you have a hunger for a JRPG from Compile Heart not in the Neptunia franchise? Are you interested in taking a bite out of something perhaps a little darker and edgier than you’re used to? Perhaps you’d like to scoff down an interesting take on a traditional battle style? Well, if any of these items has caught your fancy, then Dragon Star Varnir may be on your menu.

Hop on your broomstick and take a ride to the dark ages, where the pope looks about as evil as possible and everyone is indoctrinated to despise witches, who “give birth” to man eating dragons that burst out of their stomachs. Yeah, that was a sentence. Varnir follows the tale of Zephy, a knight in the church order who is dedicated to getting rid of dragons and their witch progenitors. Unfortunately for him, he’s pretty weak and gets beaten up by a dragon.

On the verge of death, he is saved by a group of witched hoping to use him as a hostage to rescue their friend from the church. Turns out, Zephy is a witch as well. A male witch. Because apparently that’s a thing now. After being promptly abandoned by his commanding officer, Zephy joins the witches in attempting to live without either succumbing to the madness induced by the dragon growing inside, or having the dragon burst out. The catch is that witches need to consume dragon meat and blood to keep the madness at bay, but that causes the dragon to grow. Fair warning thought, apart from the general premise, the plotline isn’t exactly “surprising”, or at the very least it feels like everything is mostly laid right out for you and is rather trope-y. 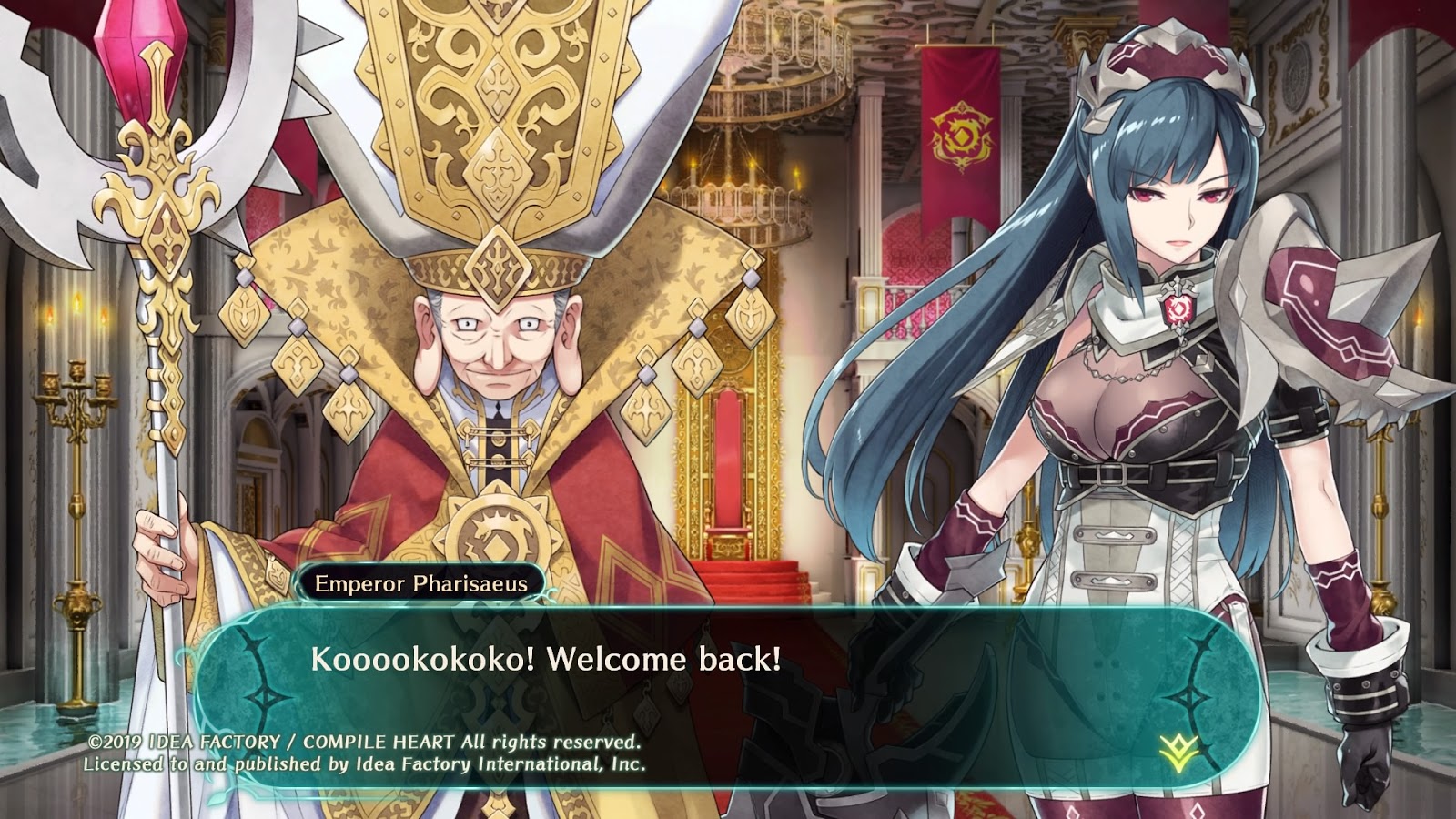 As you explore the bleak world infested by dragons, you will have to defend yourself from the hordes of “dragons” that infest the world, some of which REALLY don’t look like dragons. You will explore field areas and drop by the witches’ enclave between outings. In the enclave you can check on and report quests you’ve taken, visit the shop for provisions and new weapons, give the witches gifts in the hope they’ll stop hating you, and try to prevent the young children from turning into dragons. Most of these are pretty cut and dry with the exception of helping the children and the elixirs.

Essentially, you can give the children dragon materials to consume to prevent their madness, but the dragon within them will grow. As you spend more time in a dungeon or field map, the madness will progress further, so if you actually care about them, you get put on a bit of a timer to try and save them. The elixirs on the other hand, are fancy craftable items that when consumed summon a couple of dragons to fight. Win and you get a piece of gear associated with the elixir. The best part is failing allows you to keep the elixir, so if you get a randomized elixir with no idea how powerful the enemies will be, you can still salvage a failed attempt.

I mentioned the madness from the dragons, but there is also a madness gauge for your party as well. Choosing the wrong selection in a cutscene or letting your partners die in battle will fill up the gauge. If it gets too full your party members will start succumbing to the madness, so you may want to shy away from that as much as possible. Fortunately the bulk of the madness gauge is filled with poor dialogue choices, and not from battle related choices, because you can get KO’d pretty fast if the enemies decide to be particularly mean. Thankfully “dyeing” just means that you get sent back to the witches enclave, albeit at the expense of your sanity. 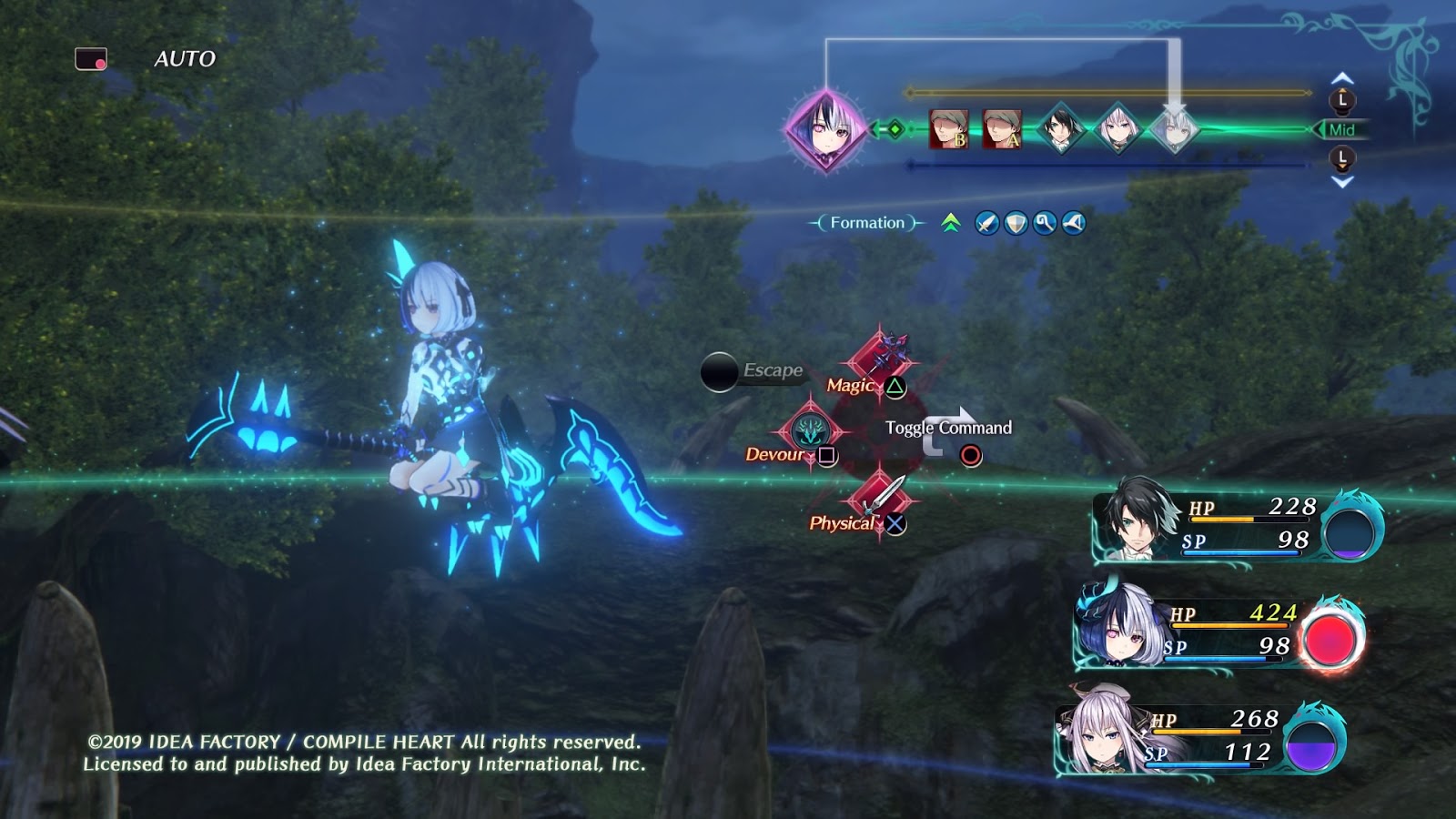 Dungeon and field exploration are pretty standard Compile Heart fare. You roam around a field, smacking enemies to get a preemptive strike, or outright killing them and still getting all the loot and exp if you’re strong enough, picking up items from harvest points and treasure chests, and using one of the many field skills to help you traverse the area. Props to the devs for allowing you to swap between all your party members and not just the ones in your battle line-up. You also can hop on your broom, or sword in Zephy’s case, and essentially use it as a “dash” to speed up travel time, although it will run out after a bit and need to recharge.

So how is the battle system like? Well, I think the easiest way to describe it is “turn based Mega Man StarForce with Disgaea like fields and Toukiden style bosses”? Chances are there are only going to be a select few who even get two of those, so I’ll try to describe as best I can. The battles are turn based, and your characters are set in a single row, whereas the enemies take up a grid, with larger enemies taking up multiple “squares” on the grid. The kicker? The grids are 3D. You not only have rows and columns to deal with, but also “depths”.

This also plays to your party, as separating on different “layers” will help spread out damage so large attacks don’t hit the entire party, but there are also “formation bonuses” that will give boosts depending on which layer a character is on. Skills can also hit rows, columns, depths, or a combination of the three. For instance, the first fire skill hits a “vertical column”, going through the layers. Large bosses and enemies play this up with multiple “parts” on different layers that are in charge of different attacks. Take out the “part”, and they won’t be able to use the associated move. 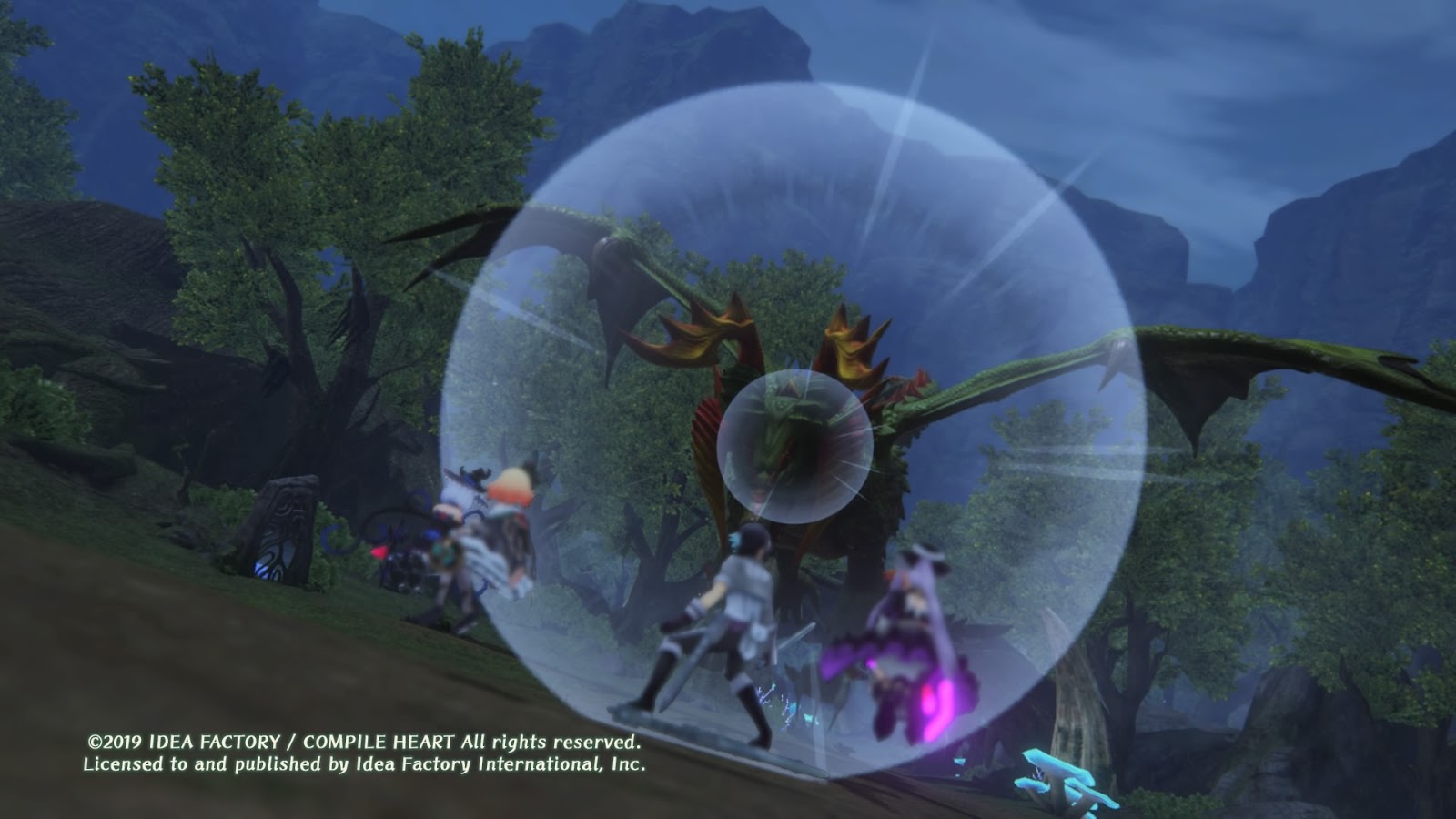 So what can you actually do in battle? Well, you’ve got the standard HP gauge and SP gauge, as well as a dragon gauge that I’ll touch on in a bit. You can choose from” physical attack, magic, item, guard, switch character, or devour. Physical attacks can be up to three attacks that don’t consume SP, or a skill that uses SP to work. Magic is pretty standard fare as well, same with item and guard. Switching characters is actually really nicely done, as switching doesn’t take a turn, and you can do it as many times as you want in a single turn, making your sub-party that much more relevant to the fight since you don’t waste turns swapping out. And then there’s devour.

Devour is an interesting function, where you can attempt to “feed” the enemy to the dragon living inside you. When you attempt to devour an enemy, you will be given a success chance based on how much damage the enemy has taken, as well as if you’ve hit them with a weakness exploit or gotten a critical on them. The more of these you get, the better your chances of devouring. Once an enemy is devoured, you regain some HP and SP, but also unlock that enemy’s “core”. You also get shown a handy check mark if you’ve already devoured an enemy.

Each core devoured is specific to the party member who devoured the enemy, so if you’ve got five part members, you’ll have to eat that dragon with each one to unlock the core for all of them. These cores are how you get your skills, and also provide stat bonuses. During battle you’ll collect ability points that you can use to unlock “nodes” on a grid you get from the enemy. Skills tend to cost more points while stat upgrades tend to be cheaper. After unlocking these skills, you can then choose which ones you want to “set”. There are four categories: physical, magic, devour, and passive. Each skill that can be set has a cost, and the total cost can’t exceed the limit (the starting limit is 20, if you’re curious). The limit is individual to category, so if you’ve used 19 points in passive skills, you still have 20 points in each of the others. 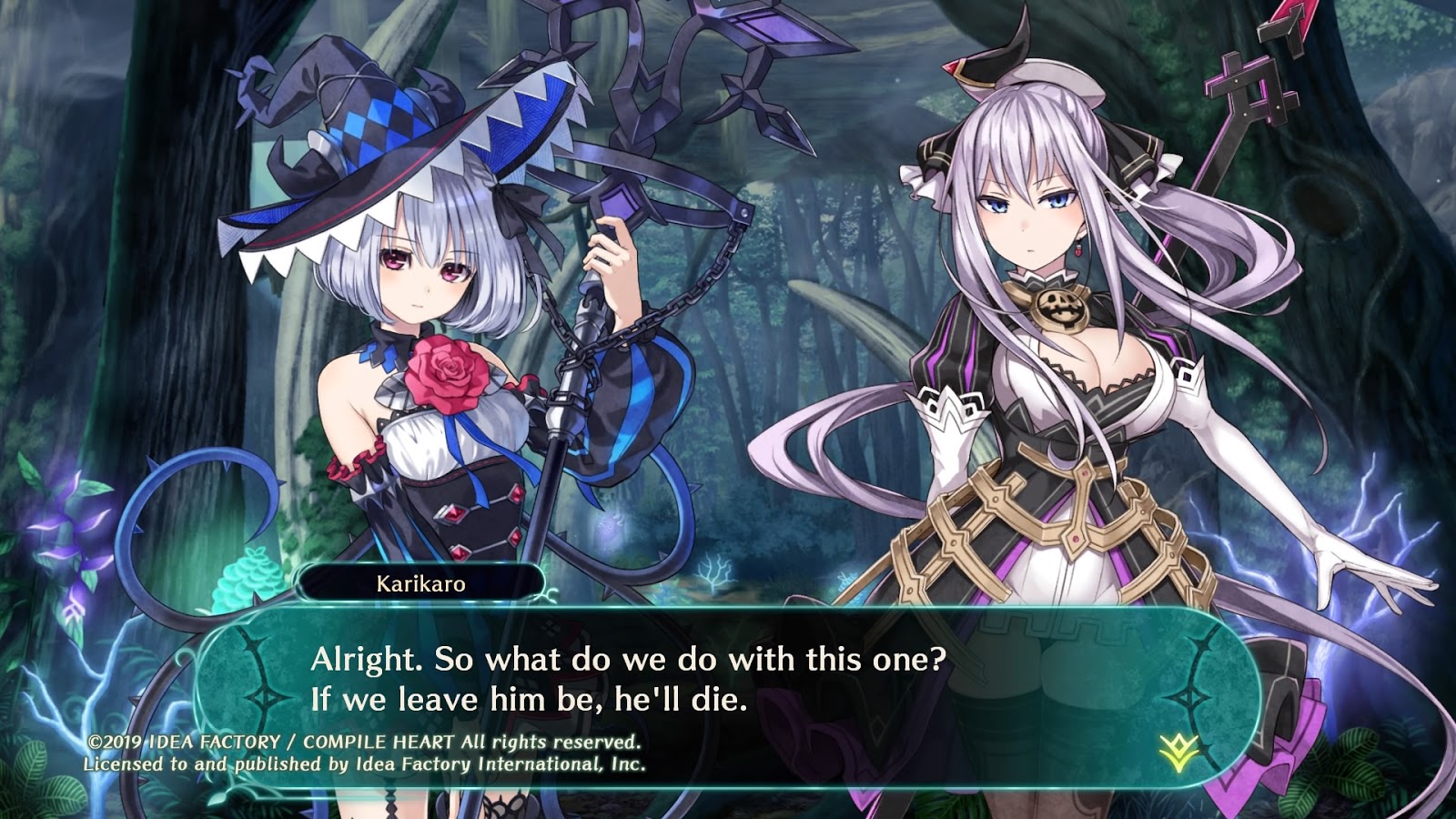 So let’s talk about the soundtrack and visuals a bit. Most of the game is typical Compile Heart visuals, with anime stylized character models and “dynamic” anime cut-outs during cutscenes. The only thing is that all the 3D art has a permanent hatch pattern pasted over it, and I can’t really figure out why. It annoyed me at first, but I got used to it, but it’s still a little weird. The soundtrack on the other hand is pretty good, lot’s of epic battle themes, and the gloomy and despairing tracks fit well.

A couple of points to note before I give it a final rating. If the game says the sidequest boss is harder than the boss you just beat, they REALLY mean it. Jumping from a level 30 boss to a level 60 one was NOT what I expected, and I basically “wasted” some of the children’s madness trying to go beat it. Secondly, the witches are rather particular about the gifts you give them. I found they didn’t like much, and what they did like barely moved the affection gauge, so be aware of that. Some enemies are kind of dicks. They might only take one damage per hit, or be nearly impossible to hit, making them rather frustrating, but devouring them gives you some really nice skills.

Unlike in most of these styled games, switching party members is extremely useful due to the “no downtime” between switching. This means you can bring out the sub party to devour for cores, or make them the buff/debuff specialists, and then get rid of them when you want to go back to the heavy hitters. Last note is about that dragon gauge I mentioned in battle a while back. When that fills up, your attack gets a MAJOR boost and you get full HP and SP heal. Feel free to abuse the heal, as this will happen a lot. Also, bosses can really lay the smackdown if you aren’t prepared, so be careful with your remaining health. 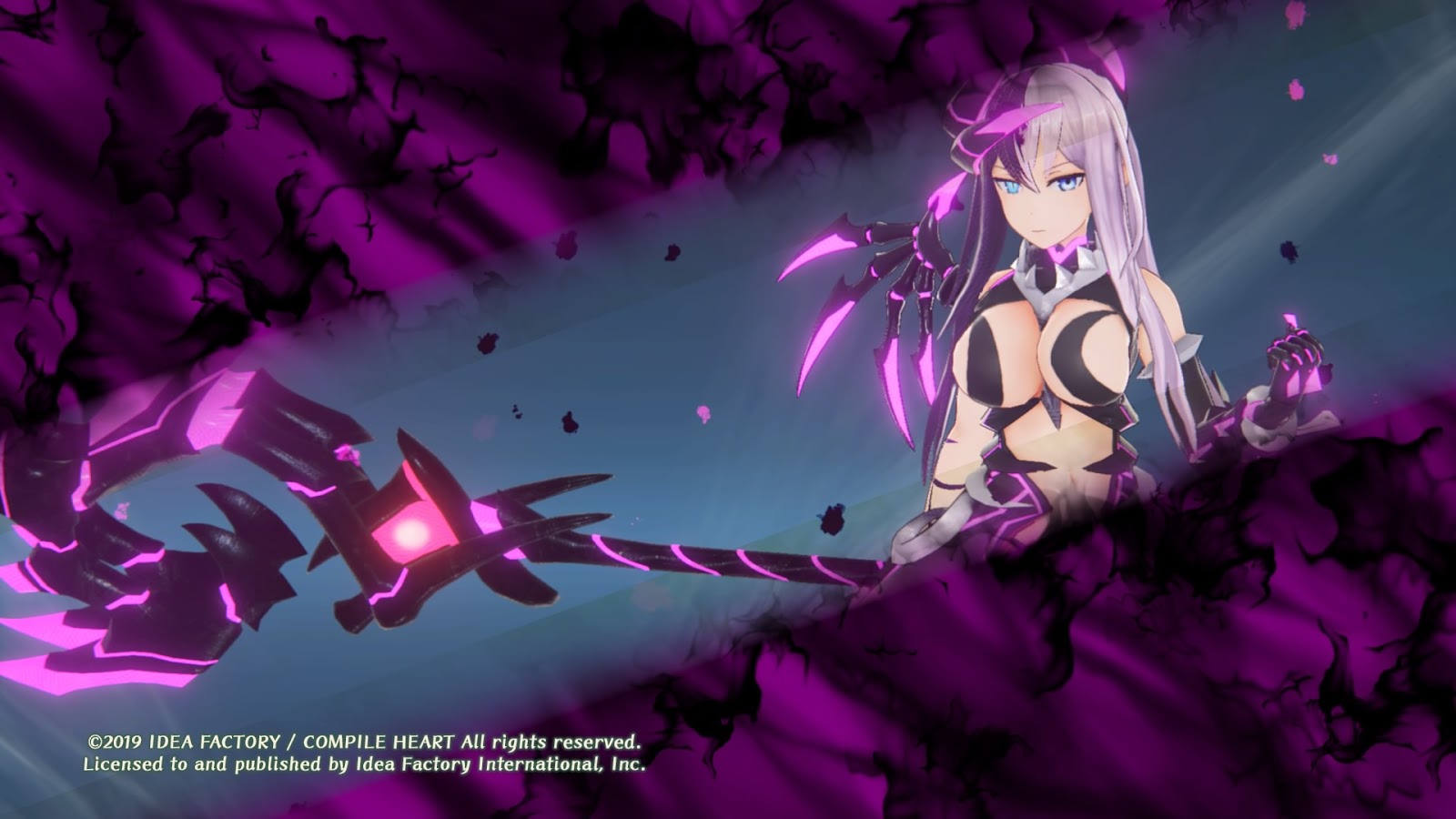 Overall I had a lot of fun with Varnir. Yeah, the plot is a little trope filled and cliché to an extent, but the battle system was really fun, and I felt like I was playing a sort of pokemon-esque devouring game. While that sentence may need some work, the “collectible upgrading system” was pretty fun, and I’d always try to eat as many enemies as I could. Is Varnir perect? Maybe not, But 8 out of 10 witches would probably promote it.